From MIT to NASA to TEDx, this 12-year-old Hyderabad lad has rocked life after dropping out of school

Hemang Vellore signs up for every session that interests him and has said goodbye to school to be a student of life. He talks about his love for robotics and programming has netted him everything

What's common between Microsoft Corporation's Co-Founder Bill Gates, Co-founder of Apple, the late Steve Jobs and CEO of Facebook Mark Zuckerberg? Apart from the obvious fact that they are (or were) visionaries in their fields, another obvious fact is that all three were college dropouts. Twelve-year-old Hemang Vellore's name would have made it to the list, but he realised much earlier that the tech world's hallowed trio that the education system is just not for him.

Robokshetra is the name of the robotics workshops Hemang, along with his friends, conduct for those students who are interested

And so, when he was all of eight years old, he left school. "The school’s ultimate goal was to get me to pass the exams, anything that I did differently, I was ridiculed or even punished for," says Hyderabad-based Hemang. The problem for someone like him, became quite acute at one point. His mother, Umarani Vellore, chips in to add, "When he wrote answers in a way that was not prescribed by the teachers he was taken to task, even if the answers were right." So together, the mother-son duo made a decision in 2016 that it was time Hemang dropped out of school. 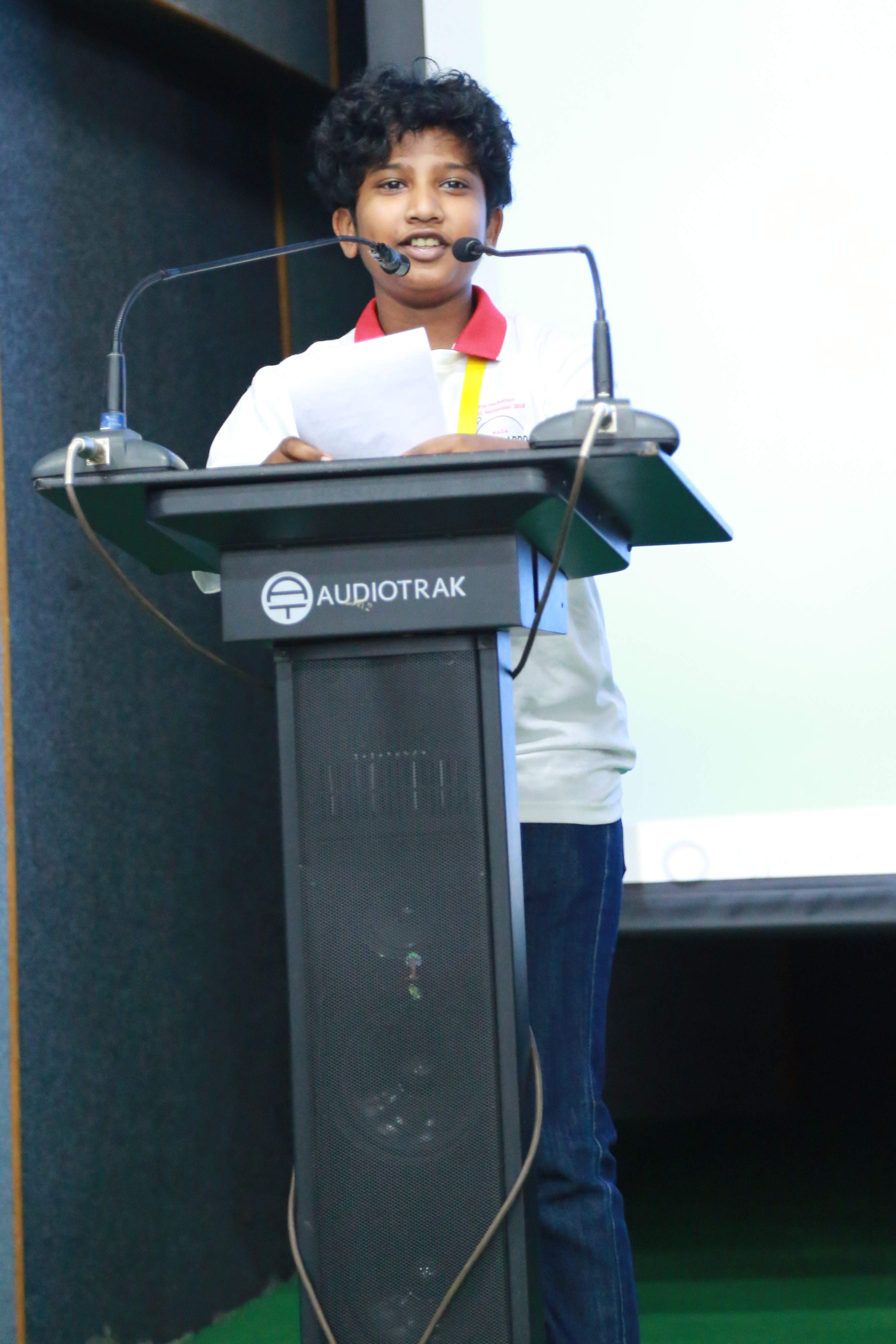 One big step for free will
Now, the most obvious question that arises is — what next? Hemang signed up for all sorts of workshops that happened in the city, especially those that were related to robotics and programming. But the youngster truly found his calling when he signed up for the International Institute of Information Technology Hyderabad's (IIIT Hyderabad) Summer School. And it was here, while learning Computational Thinking and its applications, that he truly felt at home. "No one cared if you go to school or not, they respected you for what you could do," says Hemang.

He has given TEDx talks to date

Since then, he has attended at least 50 national sessions and 10 international ones. And this is where most of his learning happens. He has also been to IIT Madras and IIT Kharagpur to attend workshops. But by far, the most interesting workshop he has attended is when he underwent an 11 day-training in Delhi for the NASA Moon Rover Challenge in 2016 and in 2017 and became the Pit Crew Member for the NASA Human Exploration Rover Challenge held in Alabama, USA. His tryst with NASA did not end here. He was bumped up from being a participant to a mentor. Most of the time they aren't at home because they are attending this session or that workshop, I hardly get to meet them (laughs). I am glad Hemang is making most of the opportunities

He also took it upon himself to organise a pre-hackathon ahead of the NASA International Space Apps Challenge 2018, an international-level hackathon at B V Raju Institute of Technology (BVRIT), Narsapur, Andhra Pradesh in September 2018. "It was a thrilling experience," he says and adds, "It was at BVRIT that I was invited to give my first TEDx talk on Aspiring Mindfully. So as a return gift of sorts, I proposed to organise this workshop there and they graciously accepted."

He was invited as a speaker to Impact 2016, 104th Indian Science Congress in Tirupati, TECH 2018 organised by UNESCO MGIEP, Amaravathi Mini Maker Faire and at many other places and occasions

Need for green
This youngster was also part of the prestigious Fab Academy directed by Neil Gershenfeld of MIT's Center For Bits and Atoms. He received a 70 per cent scholarship to attend their six month-long Learn How to Make (Almost) Anything Diploma Program last year. It was held in their Fab Lab at Vigyan Ashram, Pabal, Pune. "I learnt to make my own boards with microcontrollers, used the technique of smouldering to attach components to a Printer Circuit Board and so much more," he says and we have to remind ourselves of the fact that he is just 12! While Hemang was in Pabal, the lack of trees and the hardship in getting water awakened an environmental consciousness in him. "I realised that there is no use of technology if we cannot help Mother Earth," says the young achiever and as soon as this realisation dawned on him, he started taking more steps to increase environmental awareness. Thus followed ideathons, makeathons, plastic hackathons, upcycling contests and more which he both organised and participated in. "I have also resolved to plant ten trees per month," informs Hemang who names his mother as his biggest inspiration. To boost the spirit of youngsters and spread awareness amongst them about the environment, Hemang collaborated with the NGO Youth For Seva and they organise Friday Talks in different schools. He has even demonstrated the various robots and rovers he has made.

He has won many awards at fests and competitions organised at NIT Warangal, JNTUH College of Engineering Jagtial, The Geek Angels Summit, Osmania University and so on

And even today, every day is exciting for Hemang as his morning usually begins with opening the laptop and searching on the World Wide Web for workshops and sessions which might spark his interest. We wonder if anyone underestimates him after taking into account his age? "It happens all the time. But all I do is never give up," says the youngster who calls himself an eternal learner.

Quick three with Hemang's mother
Get to know the inspiration behind Hemang's will to learn, his mother, former President of Rotary Club:

So, your son says he feels inspired by you...
We are actually co-learners and as I am not from a Science background, I enjoy learning along with him

What about your husband?
He is our ATM (laughs). He is very supportive of whatever we want to pursue.

What are your dreams for Hemang?
I am fine with whatever he pursues because I know that whatever he does, he will do differently.

Some of his work:
- In class IV, he participated in the Junior Robo Golf Challenge and his team won for making a golf-playing robot. This was his first robot
- He made his second robot in class VI. It was a remote-controlled car
- He has made a wall-climbing robot
- He made a drone in tri-colour for Indian Drone Racing League, a drone racing competition held at IIT Gandhinagar. For this, he was awarded the title, Pride of India

To find out more about him, check out facebook.com/hemangvellore