From rare circulars to a piece of the Berlin Wall, here's why you MUST visit IIT Madras' Heritage Archives

IIT Madras is one of Chennai's most renowned institutes, and it turns 60 this month. A 'historic' exbibition is the perfect tribute for the occasion!

Nestled away in a behemoth of a campus that is adorned by towering trees, flowering foliage and winding roads is one of Chennai’s premier institutes of education – Indian Institute of Technology, Madras. Founded in 1959 with substantial assistance from West Germany, IIT Madras is one of the nation’s leading engineering establishments, having been ranked #1 for the last four years in a row. It was the third of its kind, after the campuses at Kharagpur and Bombay, and was conceptualised as a tribute to India’s near-mythical contributions and achievements in the field of education and research. Some of the foremost pioneers of Indian education have been associated with this institution in one way or the other, and its very first convocation on July 11, 1964, saw the beginning of a new epoch in this domain. Over the years, the chief guests at the subsequent convocations ranged from former President Sarvepalli Radhakrishnan to Nobel Laureate Sir C V Raman. In 2019, this illustrious university completed 60 years of existence. 60 years of delivering world-class education from its 617-acre campus in Chennai.

As a symbol of Tamil Nadu’s progress in the fields of science, engineering and research, and as the centerpiece of the government’s several ‘Institutes of National Importance’ across the state, it was only befitting that an event was held to commemorate this historic feat. The ‘Historical Archive’ exhibition, launched on September 12, 2019 was quite apt in this regard. Housed within the Heritage Centre, this well-designed and meticulously planned display on the ground floor showcased many of the iconic and nostalgic moments witnessed by the institute, right from its German origins to its latest convocation nearly six decades later. The primary mode of display that catered to this end was a series of boards that were arranged in a linear pattern on both sides of a central aisle. There are a plethora of mediums that have been utilised to bring out the significance of the occasion – photographs, trophies, memorabilia, time capsules, models, signed relics and books. The Origin: The glorious history of IIT Madras is housed within the walls of the Heritage Centre

Several large paintings of the founders and other prominent figures, freshly inducted into the centre, welcomed visitors, while carefully placed spotlights and hidden illumination drew their subsequent attention to the displays themselves. The photographs are aligned by the year, so that one can literally ‘walk through the years’ and catch a glimpse of the birth and growth of the institute.

The friendly and well-informed floor manager at the centre, Mamata Dash, is also quick to point out and list the salient aspects of each panel, should a visitor require assistance in comprehending a certain photograph. “During the initial meetings between Indian and West German officials, it was decided that there will be an IIT in each of the four quadrants, and many South Indian cities vied for the honour. Thanks to the efforts of the then Chief Minister K Kamaraj, Madras was selected,” says Mamata.

Besides the individual labelling and encasing, the exhibition also houses some incredibly valuable residents too, including a piece of the Berlin Wall! Kept in a display case of its own, the mortar bit that was originally part of the infamous Berlin Wall that divided East and West Germany until it was torn down in 1989, was brought to IIT Madras by a German professor who was part of the initial party that worked at the institute.

While some of the printed descriptions were hastily fixed to the boards, there was no mistaking the quality of the items on display – everything appeared incredibly rich and powerful in their portrayal of a grand establishment that was young in its age (60 isn’t much for an educational institute!), and yet, had already cemented a spot in the coveted national rankings list. 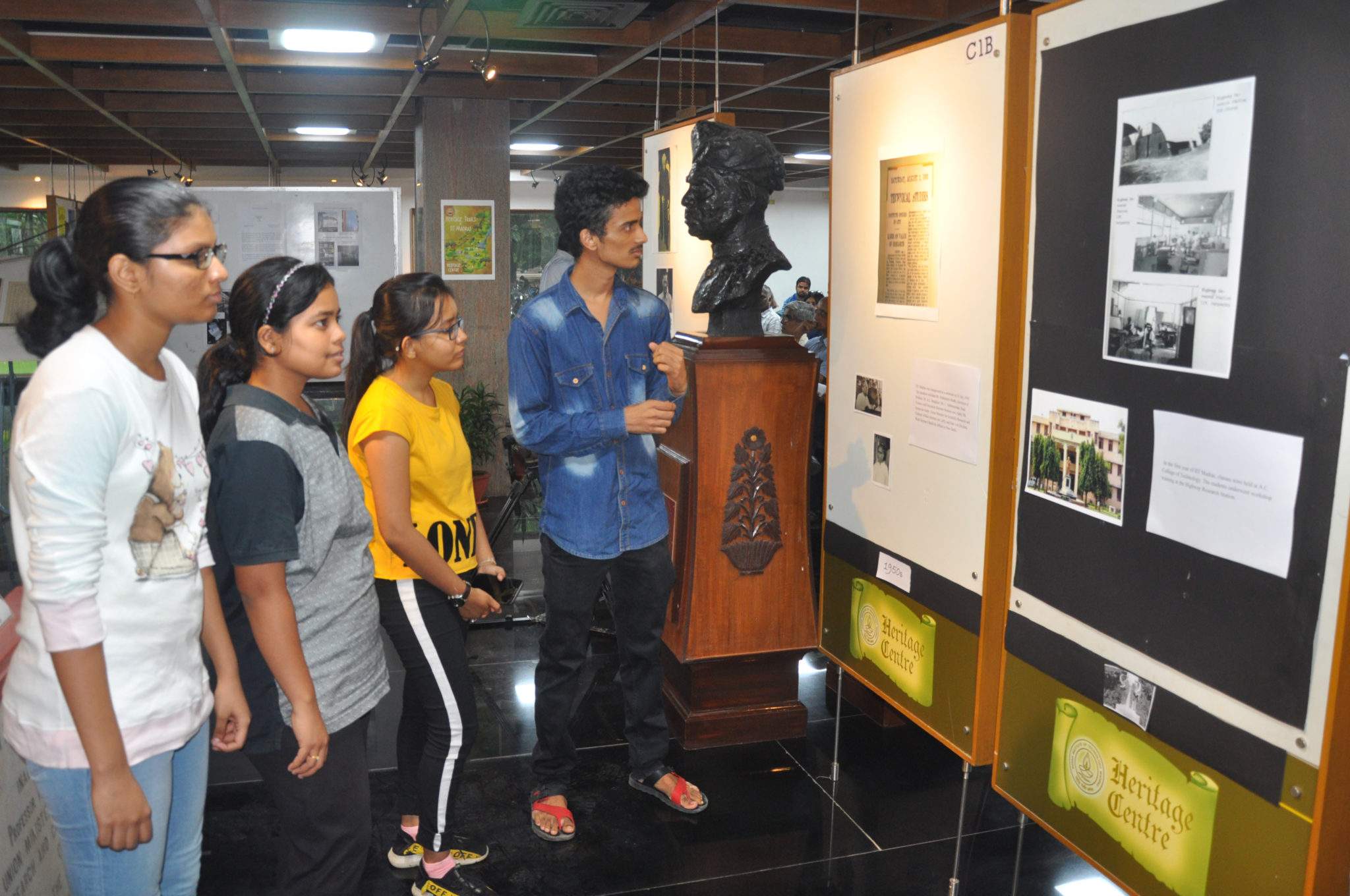 Learning More: Visitors are presented with valuable information, photographs and artifacts related to the institute

A brief interaction with the Chief Archivist, Ponarasan, revealed the elaborate plans that lay in store for the Heritage Centre. He joined the centre a mere two months ago, but has been working tirelessly to compile and catalogue the vast array of historical archives and data that lay before him – everything from old brochures, tenders, photographs, files, official documents and circulars needed to be dusted, cleaned and carefully preserved! Ponarasan went to great lengths to explain the various methods that he, along with his two assistants, will be employing in the upcoming years to see this through. “We need to first preserve the archival documents and tenders physically, for they are in a delicate state. Once this is done, we will be using digital methods, and finally storing them in sophisticated and compact vaults. There are three steps that we follow for this, and we will also upload them online so that users can browse the priceless documents in the form of an e-catalogue,” says Ponarasan.

He adds that the whole process would take 3 to 4 years, due to the difficulty of working with such aged documents. “We do not add any sort of seals or stamps to certify the documents – that would amount to manipulation! Instead, we get the approval and authorisation from the concerned departments, their heads and other authorities,” he says.

The exhibition is quite exemplary in many ways, and it serves not just as eye candy, but also as a gentle reminder to the public about its humble roots. The sheer amount of artifacts on display speaks volumes about the sort of meteoric transition and technological alterations that the establishment has gone through, whilst always retaining its stunning, natural campus that is home to not just students but deer and macaques as well! IIT Madras is most definitely a top notch institute, and this Heritage Archive exhibition is a worthy tribute indeed