This cartoonist just mapped Kochi's biodiversity. And you'll love it!

We find out more about the project that has mapped every corner of Kochi in a graphically and visually stunning manner. It is a part of an international project to learn more about biodiversity

Imagine if you could see your city the way it was meant to be seen. Not through bored glances out of bus windows or in between tea breaks from your busy office life. International Council for Local Environmental Initiatives (ICLEI) and cartoonist Rohan Chakravarty have joined hands to do exactly this. They have mapped the biodiversity of Kochi by taking account of the biodiversity that exists in every nook and corner - In a graphically and visually stunning manner. This is the city from the eyes of all its inhabitants, regardless of the species.

ICLEI introduced the project this year. The idea was to use research biodiversity in the process of urban planning. The organisation has launched the programme acoss 3 countries. In South Asia, it will be introduced to Kochi, Panaji, Mangalore and Gangtok, with Kochi being the first. "We are creating a naturalistic map using a Geographic Information System (GIS) mapping system," explains Monalisa Sen, the Programme Coordinator for ICLEI South Asia. "This is just a subset of the actual larger plan. The map represents a visual representation of all the living and non-living beings that the city is made up of. It is aimed to convince people of what they have and where they have it. The next step is to launch an actual pilot project to help conserve it through a decentralised action plan at the local government level." GREEN LINES: Rohan works on the themes of wild life and conservation

How Rohan maps an area

Rohan Chakravarty is a cartoonist and illustrator who works on the themes of wild life and conservation for various newspapers. ICLEI approached him after they came across a mapping of tiger reserves he had done for the World Wide Fund for Nature (WWF). When Rohan studies a city or a particular locality, it takes him over a month. He collects information from local governments and personally learns about biodiversity that occupies it. He also collects data on the micro-fauna and terrain that populate each corner of a city.

He says, "There needs to be an understanding of who we share this land with. But all the data we have out there is too complicated for a layman to understand. My aim was to make this understandable to any ordinary person who wants to do and know more." Kochi, he learned, has a wide variety of green spaces within and around it from marshes and paddy fields to beaches and hills. 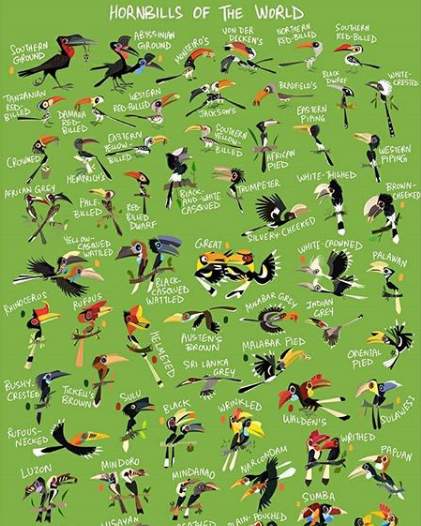 PLAY BILL: Rohan's rendering of all the hornbill species in the world

What he learnt about Kochi

He learnt that Mangalavanam, a mangrove forest that rests in the very heart of the city has one of the biggest populations of the Indian Flying Fox. The city's estuaries also house the Indian Ocean Humpback Dolphin and the Pearl Spot, the State fish of Kerala. He reports that Kochi's wetlands are wintering grounds for a number of species of migratory waterfowl and the hill forests of the city is home to many insects and birds that are endemic to South India.

"My idea was to present not just the biodiversity of the city but it's heritage as well. I have cautiously mapped things including fish markets, Aspenwall and even the Kerala Museum in an attempt to show just how diverse the components that make up this city are. I travelled from the Pokkali paddy fields, waters dotted with Chinese fishing nets and towards the contrasting hilly fields of the Western Ghats. It was an attempt to capture all the history and heritage Kochi has and how it intertwines with the city's ecology. It's startling to learn how little the current government has been done to conserve all these rich resources." says Rohan.

After getting to know the city through intensive travelling and research, Rohan says, "Through this, I have learnt how we can actually conserve. This is a time when any such information is extremely important. Those of you at home can start in your own backyards. There is a lot of wildlife and flora that live in your immediate vicinity. You don't have to go out of your way, you can begin with very small steps that can go a long way."