Arrested and harassed by cops, researchers to continue protests inside campuses across India

The protests will continue in campuses including IITs, AIMS, CBMR Lucknow, IISERs and all CSIR labs from 1.30 pm on January 17

The research scholars who were arrested during their protest in front of Shastri Bhavan on January 16 by the Delhi Police have announced that they will continue protesting but only inside their respective campuses. The protesting research scholars and students said that there will be nationwide protests on campuses including IITs, AIIMS, CBMR Lucknow, IISERs and all CSIR labs from 1.30 pm on January 17.

Nikhil Gupta, National Representative of Research Scholars of India, said, "We had applied for permission for a public gathering around 10 days ago and were also granted the permission. We had decided about the protest on January 3 and we specifically decided to get the permission well in advance." However, the police told them that they won't be allowed to protest in public as Republic Day is around the corner and there are security protocols to be followed.

The protest started at around 11 am on January 16 in front of the Ministry of Human Resource Development's headquarters at Shastri Bhavan in New Delhi. "We wanted to speak to someone from the department (MHRD) so we called the Secretary, R Subrahmanyam. But it turned out to be a very short conversation," said Nikhil. "He just said he is busy and disconnected the call without even letting me finish my sentence," he added. 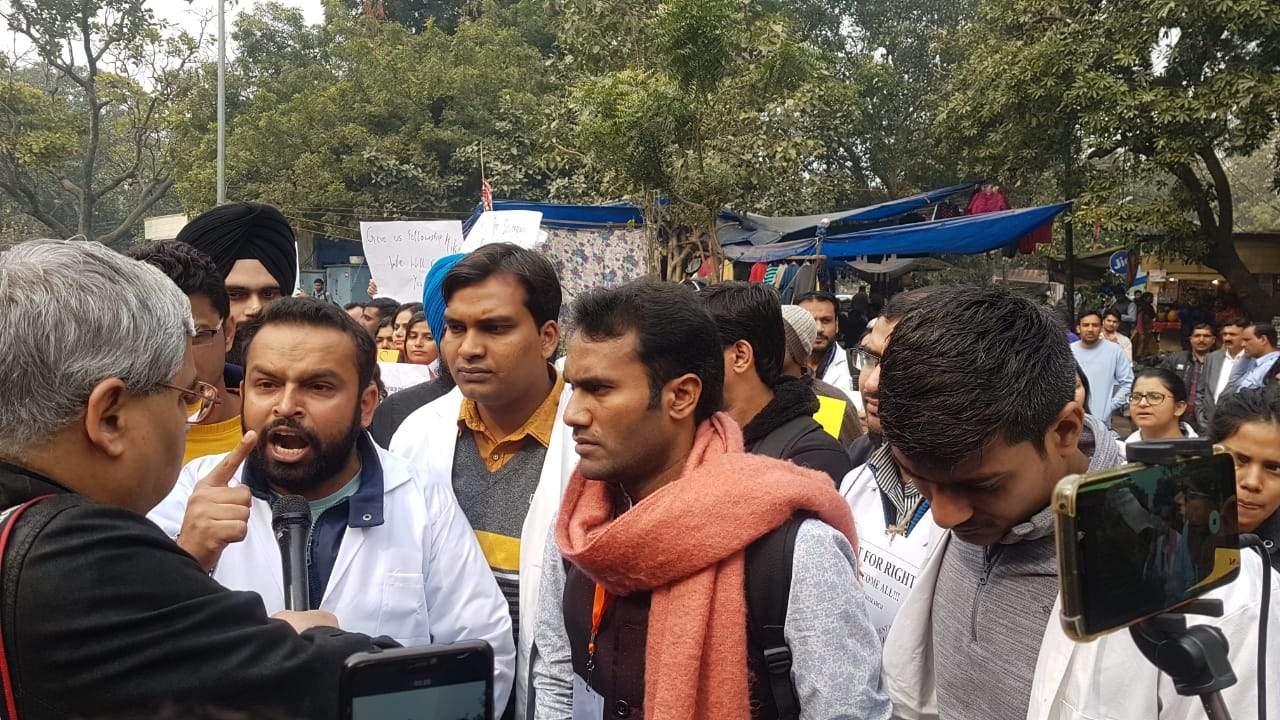 Demand For Dialogue: The researchers wanted to speak to the authorities about their issues  (Pic: Nikhil Gupta)

The protesting research scholars were then told that they might get to meet the highest official who was ready to meet. "But then suddenly the police personnel asked us to get inside the bus. They even misbehaved and manhandled us," said Nikhil. "There were four buses. Two went to Mandir Marg Police Station and two to Parliament Street Police Station. They told us that the MHRD had asked them to have the protesters arrested," he added.

The protesters were released around 6 pm but once the police got to know that they might gather again at Jantar Mantar they were detained again for an hour. "We were told that gathering at Jantar Mantar after 5 pm is not legal and that they (police) will have to arrest us again and this time there might be lathicharge involved," recounted Nikhil. The protesters decided to meet at their respective campuses across the country and continue the protest.