Art By Children (ABC) was established in the last edition of the Biennale. Art Room, which forms an important part of it, was introduced for the first time in a Government school in Mattancherry

Pablo Picasso once said, “It took me four years to paint like Raphael, but a lifetime to paint like a child.” You can stare at the Spanish artist’s bizarre renderings all you want but the essence of this statement is lost on most adult minds. At the Kochi Muziris Biennale’s Art Room, however, these words seem to echo off the walls.

Art By Children (ABC) was established in the last edition of the Biennale. Art Room, which forms an important part of it, was introduced for the first time in the Government Girls Higher Secondary School, Mattancherry. However, the initiative has grown much bigger this year. “The idea is to bring together schools and the community to create interactive art spaces”, says Blaise Joseph, the Project Coordinator. 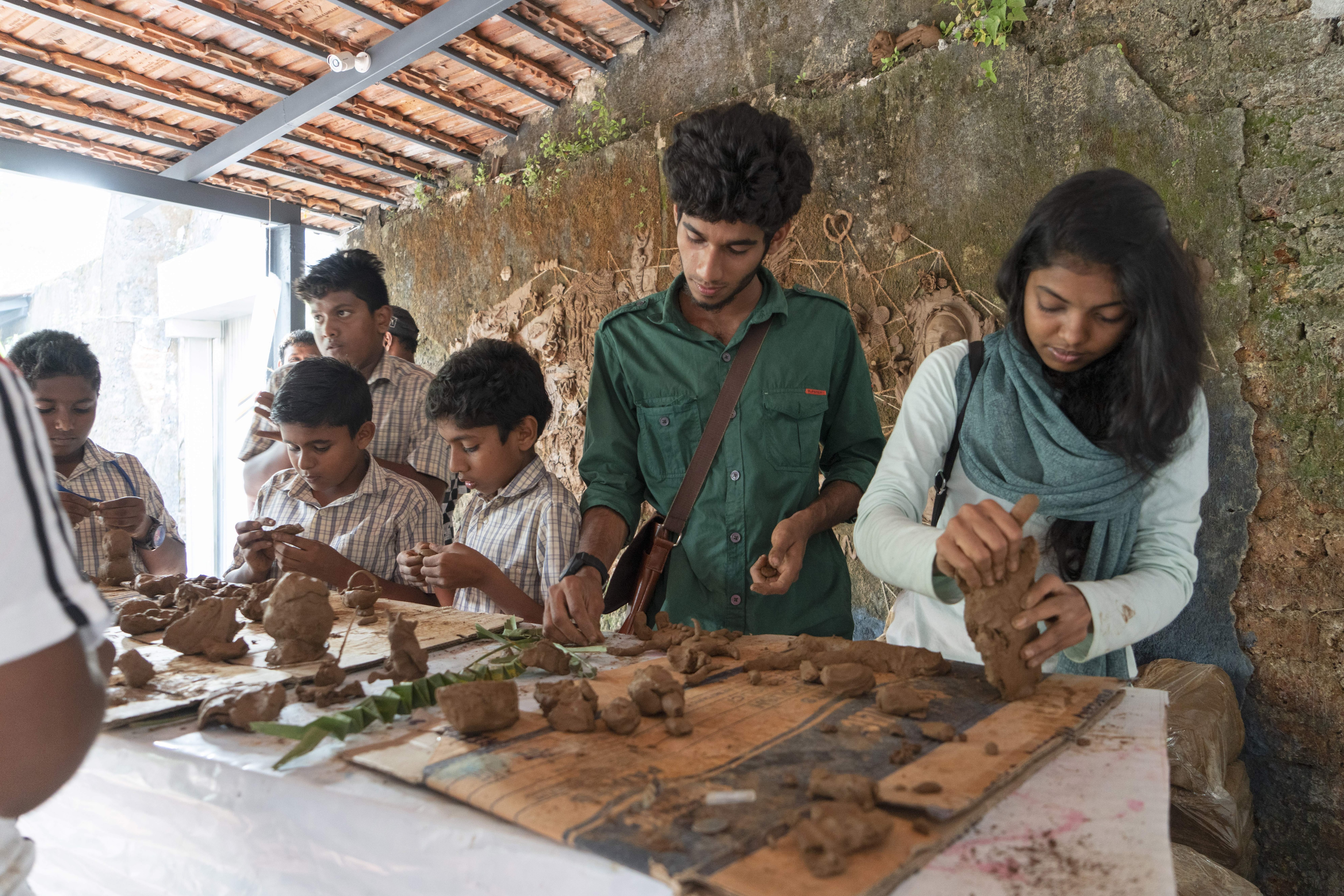 The right space: The programme aims to become a mainstay in the state's education

“Without limiting it to just children, we want this programme to be open for anyone who wants to keep their childhood alive,” explains Blaise who has travelled extensively through villages in North India where he has set up ‘Visual Storehouses’ which are spaces built by the community using their local knowledge and resources.

Following the floods, Blaise was part of a team which organised workshops in schools across Chalakudy using only natural materials. He says, “I felt the need to establish one such Visual Storehouse there. This was when I found out about Art Room, which is the same concept  and we decided to combine it.”

We don’t want to change them, but we want to steer them from the direction they are being taken in. Art Room is a space where children can interact freely with different materials and their own minds. The idea behind it is to tap into the vast realm of imagination that they have within them. We can't limit it to a page on a notebook or within the four walls of a classroom. The idea of a room is simply symbolic, the art has to spill outside of it

The idea was to establish 10 art rooms in government schools and aided institutions in Alappuzha, Chalakkudy and Thrissur districts where the floods were particularly acute. Currently, seven schools have functioning Art Rooms. “There was no specific criteria,” points out Blaise. “All we needed was an independent room and the chance to interact freely with the students and we partnered with schools that were open to it. The programme began in November headed by 5 artists who work as facilitators.

“We are collectively heading towards nature deficiency,” warns Blaise. “No one seems to have any connection with nature. We have had children who refused to work with the organic clay we gave them because it was so different from the colourful Play-Doh that they are used to!” According to the NCERT’s guidelines on art education, such spaces for art are mandatory in the syllabus, but they never come into action. “There aren’t proper art classes, the whole thing is merely decorative,” says Blaise. Art start: The programme aims to redefine the idea of art education

At Art Room, everything comes from the fundamental belief that children by nature, are creative. “Children are always searching,” says Blaise. “We want to offer them a platform or an outlet. If there are enough funds, we hope to keep the programme running for the whole academic year. We want to create model art rooms and offer them up to the government. Computer classes are compulsory in all schools, we want art to get the same treatment. Considering how fundamental art is, it is sad how overlooked it is in our education spaces. I believe that any space with art is one that is more humane.”

“And such spaces should exist, they are a beacon of hope,” he continues. “People who have grown up in rigid environments, whose parents were restrictive wish for something better for their children, so they bring them to us. They are victims of an old world. We try to bring them outside of this idea of drawing things that they are taught to draw. There are so many things we see and interact with on a daily basis, we want to trigger that vision and push people to see what is right in front of them. We want them to draw truth.”