"I can't think of holding down a conventional job. I want to work in the social sector," says Sonia Akula who runs Hyderabad-based NGO Action Aid For Societal Advancement

Have you watched the 2019 Telugu movie George Reddy, based on the true story of Challa George Reddy, a student of Osmania University who was murdered in the 70s for his strong opposition of social discrimination and economic inequality? If you have caught this action/thriller that was released in November, we are sure that you must have appreciated the actor who essayed the role of George Reddy’s sister. Played by Sonia Akula, though the role itself is brief, her performance made a mark in the scene where their mother passed away.

"My expressions and acting were appreciated in the scene, the whole set was feeling emotional by the end of it," shares Sonia. And before her big break, the 27-year-old used to host many protocol events for other departments when she was working with the Telangana Water Resources Development Corporation, because, you see, anchoring is something that she loves doing. It was at one of these events that she was 'noticed' by director B Jeevan Reddy and offered the role. 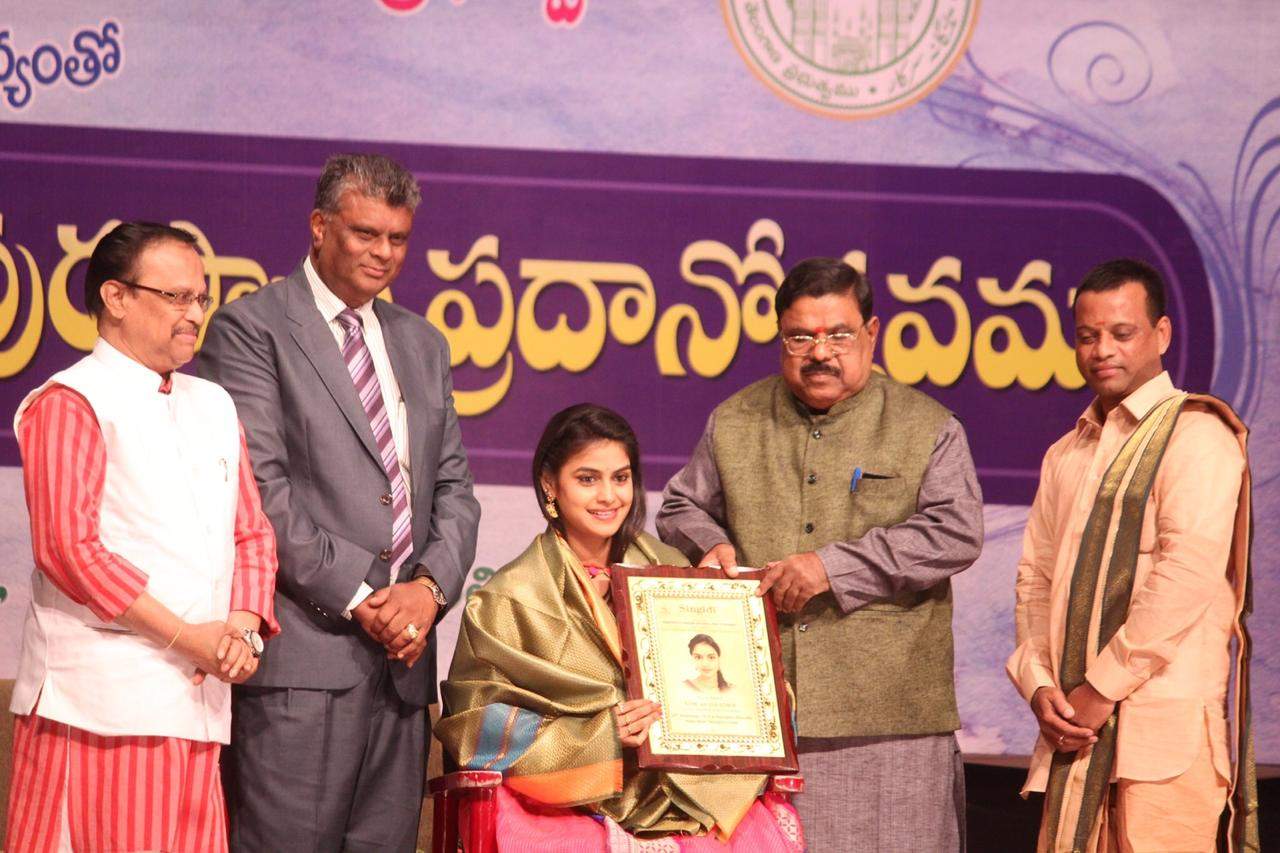 She recently received the Young Achiever Award from Singidi, a cultural organisation and the Department of Language and Culture, Government of Telangana | (Pic: Sonia Akula)

But there is more to Sonia than just acting. In 2017, this Hyderabadi girl set-up Action Aid For Societal Advancement (AASA), an initiative that focuses on the holistic development of every individual in the society. "As an organisation, we are extremely action-oriented," says Sonia. Among the many projects they have started is Project Happiness, where instead of visiting orphanages and distributing sweets or spending time with the children there, the children are taking to fundraising events organised for them, usually in a gated community.

"Here, children are not treated specially, they are treated as a part of the community," explains the Manthani-born youngster. One of the projects closest to their heart is Project Aid To Educate, where they set-up libraries in rural government schools - so far they've achieved this in five schools located in Manthani and Bhupalpally. Not only novels, but CBSE and NCERT preparation books are also available in these libraries. For all their efforts, they recently received an award from Singidi, a cultural organisation. "Since childhood, I have always believed that there are two mediums that can strongly impact the society — books and movies," says the third-year student of Padala Rama Reddi Law College. Even when it comes to movies, she is not keen on commercial cinema. She wants to take up roles that convey a strong message or create an impact. She has read more than 70 scripts so far and signed on a Telugu and a Kannada movie. We find ourselves wondering why Sonia is so passionate about creating an impact and find our answer when she says, "As a child, I used to ask many questions including ones like, 'Why are GHMC workers poor?' and so on." And to continue to question society and find the answers has been the undertaking of this youngster.

The other programmes conducted by AASA:
- Project Prerna: Due to lack of motivational sessions in government schools, they organise such talks which are also career and skill-oriented
- Project Giving: They aim to fulfill the needs of shelter homes and orphanages through this project
- Child labour campaign: They organised a massive campaign recently due to which, the manager of Big Bazaar, the retail chain company, vowed not to employ children

The work they do After celebrating Bathukama with orphans at Our Community, KPHB | (Pic: Sonia Akula) Launching a library in a government school in Ippalapally | (Pic: Sonia Akula)

For more on her, check out facebook.com/Sonia.Akula05