The website of the Board of Higher Secondary Education, Delhi also had pictures of Narendra Modi and claimed that every government body in the education sector had accredited them

You've heard of fraudulent schools and colleges. This man in Delhi was running an entire board for five years and had conducted exams for thousands of students and awarded +2 degrees to them. The crowning irony is that on their website, there is a complaint that the Chairman S P Pandey has written to the Delhi Cyber Police, complaining that their site bhsedelhiboard.net was the only official site and that any other fake sites that were being operated in their name should be taken down. They have also brazenly posted a note from the MHRD detailing boards of school education that are recognised in India with their name missing from the list.

Shiv Prasad Pande, the chairman of the fake 'Board of Higher Secondary Education, Delhi' was arrested with five others on Friday after cheating possibly hundreds of students since 2012. The accused had been running the fraudulent board with false accreditations and were nabbed from the Shahdara area. It claimed it was an autonomous organisation under the 'Government of India, Ministry of Education Department'. Not MHRD, but Ministry of Education. Despite the poorly worded English on their website and the clearly bogus testimonials, people signed up to take the exam and were conned in the process.

Not only had the 'board' named every educational authority in the country as having recognised and accredited them, it also carried pictures of the Prime Minister  prominently, as if he was a patron of their fraudulent body

The site also carries a dodgy letter purportedly from the Pradhan Mantri. Thankfully, the 'letter from the PM' due to its minuscule print is unreadable. Cheekily, it also states that students who have passed the class X and XII exams from the institution are eligible for admission to various courses under the Ministry of Skill Development and the Pradhan Mantri Kaushal Vikash Yojna.

The "Board of Higher Secondary Education also claimed to have recognition from the Ministry of Human Resource Development, National Council of Educational Research and Training and various other state education boards, police said. 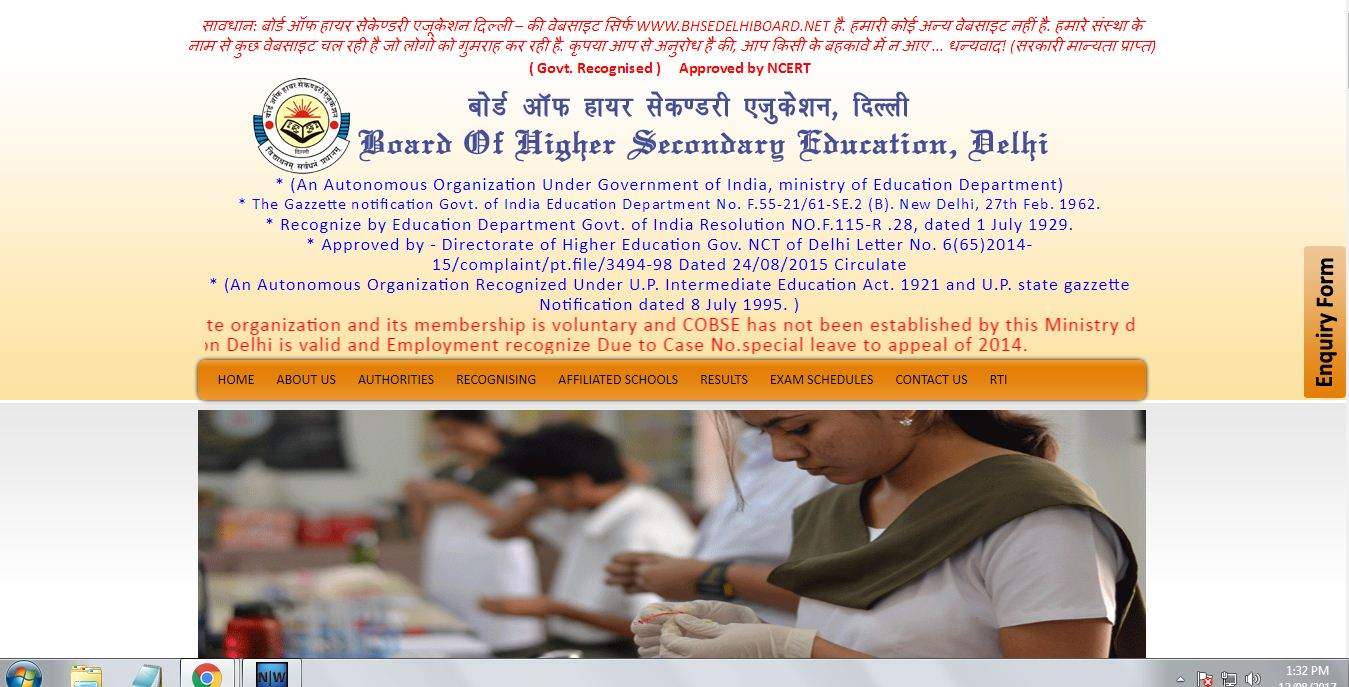 How's That: The board's website was officially taken down between 3:30 and 4:00 pm Friday evening

"Students parents and all. I want to inform you that board of higher secondary education delhi is an (sic) BOARD OF HIGHER SECONDARY EDUCATION DELHI CHARITABLE TRUST and the board along with planning commission (sic) govt. of india (sic) promoting education. Board of higher education delhi is established under the S.R. Act And (siC) Indian public trust," reads Pande's note on the site.

The assurance continues as he adds, "So, you after passing the board of delhi examination (sic) can go to higher studies and government jobs." These, to most people, would seem like red flags.

Dodge Board: The first sign that this was a fraudulent body should have been the extremely dubious English utilised in the Chairman's Letter

It doesn't stop there. The website is also flush with notifications, including announcements of exam schedules and result dates. Nope, doesn't stop there either. Police also seized as many as 15,000 fake marksheets of 17 different boards and universities, rubber stamps, printers, computers, etc were seized, said Deputy Commissioner of Police (Shahdara) Nupur Prasad.