Ravi Keerthi talks about animal rights awareness and the importance of veganism to students of various colleges. We find out why this youngster does what he does

After completing his studies, Ravi Keerthi was going through a rough phase in life where existential questions like What am I doing? and Who am I? started troubling him. He turned vegan and started fasting vigorously. "I was just thinking about how there is no difference between me, a dog or a bottle and I was adding no meaning to life," says Ravi thoughtfully.

He has also made a documentary on the dairy industry

And that is where his story begins. While the pain and hunger convinced him to give up on fasting, it gave him a purpose. "I wanted to help reduce the pain of everybody else and most of all, of the most oppressed souls and animals," explains the 29-year-old and adds that, "I don't treat animal activism as a passion or a source of satisfaction, it is my moral obligation."

This Vijayawada-born youngster started work from his own hometown where he spent Rs 80,000 to take stray dogs to the vet and created an animal welfare network. That's when he started approaching colleges to ensure that the message of animal rights reaches all students. Till date, he has given 100 lectures across the two Telugu-speaking states. He usually starts these awareness sessions with three questions — How big is the universe? How important are we for Earth? How important is every other species for the planet when compared to humans? He goes on to talk about festivals like Nag Panchami and how they are harmful for animals and then, approaches the topic of veganism without using the term. "The mindset around veganism right now is that it is a fad or a trend, so I rather make them aware of the consequences meat-eating has on animals," explains Ravi who pursued PGDM from Siva Shivani Institute of Management, Hyderabad. 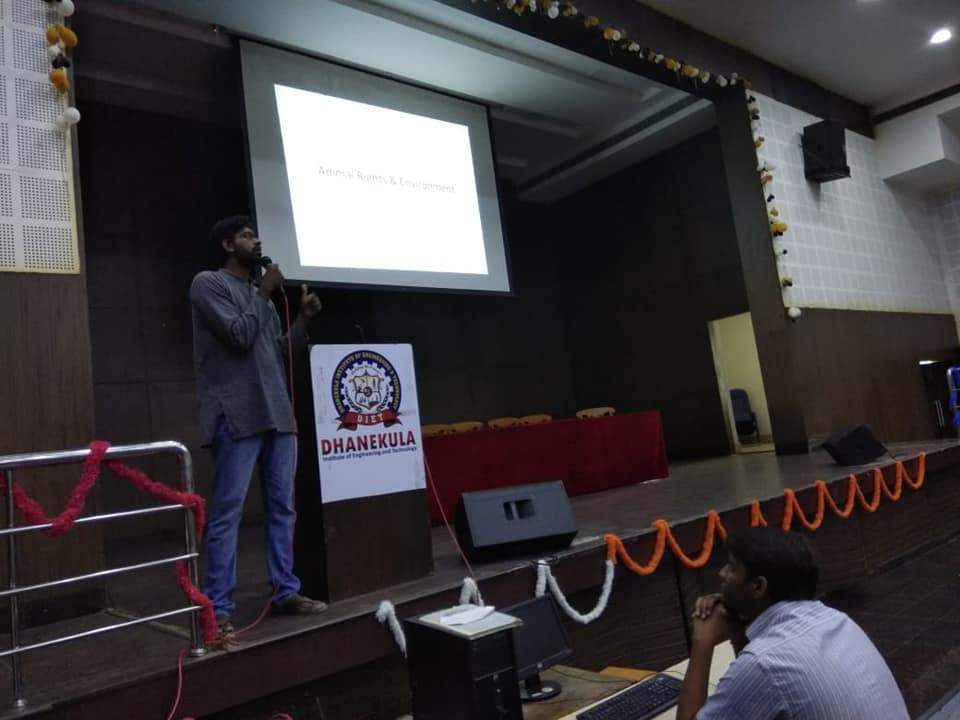 Environment and health aspects are also touched upon. Some of the educational institutions he has visited are Ramachandra College of Engineering, Eluru; Gayatri Vidya Parishad College, Visakhapatnam, Allu Ramalingaiah Homeopathy College, Rajahmundry, Aurora's Degree and PG College, Hyderabad and so on. He is also credited with starting the page Mission Vegan Andhra, that promotes a vegan lifestyle and has over 20,000 followers. This youngster also creates educational videos, he has made 25 till date, around animal rights awareness.

Ravi's plan for this year is that he wants to deliver 200 lectures and create 25 videos. "This year, we want to conduct an Animal Liberation March in July. This will be a multi-city march to unify the animal rights movement across the country," he says.

Ravi also researched and fixed estimates with regard to the impact animal agriculture has on the environment. Following are some of the insights:

- To generate one litre of milk, it takes around 1,000 litres of water, right from producing feed for the cattle, the water directly consumed by cattle, water used for cleaning the farm and processing of milk
- We feed 300 crore chickens and 30 crore bovine who are artificially brought into existence with 14 per cent grains harvested every year in India to get animal products like meat and milk
-  If we can take protein from beans instead of chicken meat, we can cut emissions by at least six times