Following an HC order and a protest, the college had extended the in-time to 8.30 pm from 4.30 pm on Friday. The new decision was made in a PTA meeting, where no student was present and curbed to 7.30

Disregarding their earlier decision, Sree Kerala Varma College has now issued a circular saying that it has altered the students' in-time to the women's hostel to 7.30 pm. Following an order by the Kerala High Court, the college principal had previously announced that the students' entry time will be 8.30 pm, from March 25. The new decision was reportedly made in a PTA meeting, where no student representative was present.

The circular reads, "In accordance to the High Court's verdict and to make sure that the hostel functions smoothly and to maintain proper discipline, the hostel in-time for female students is altered to 7.30pm, by the principal [sic]." This is in partial violation of the Kerala HC order that asks the college management to come to a reasonable decision on the in-time after due deliberation and discussion with the students. The original in-time that led to the filing of the case was a rather oppressive 4.30 pm. 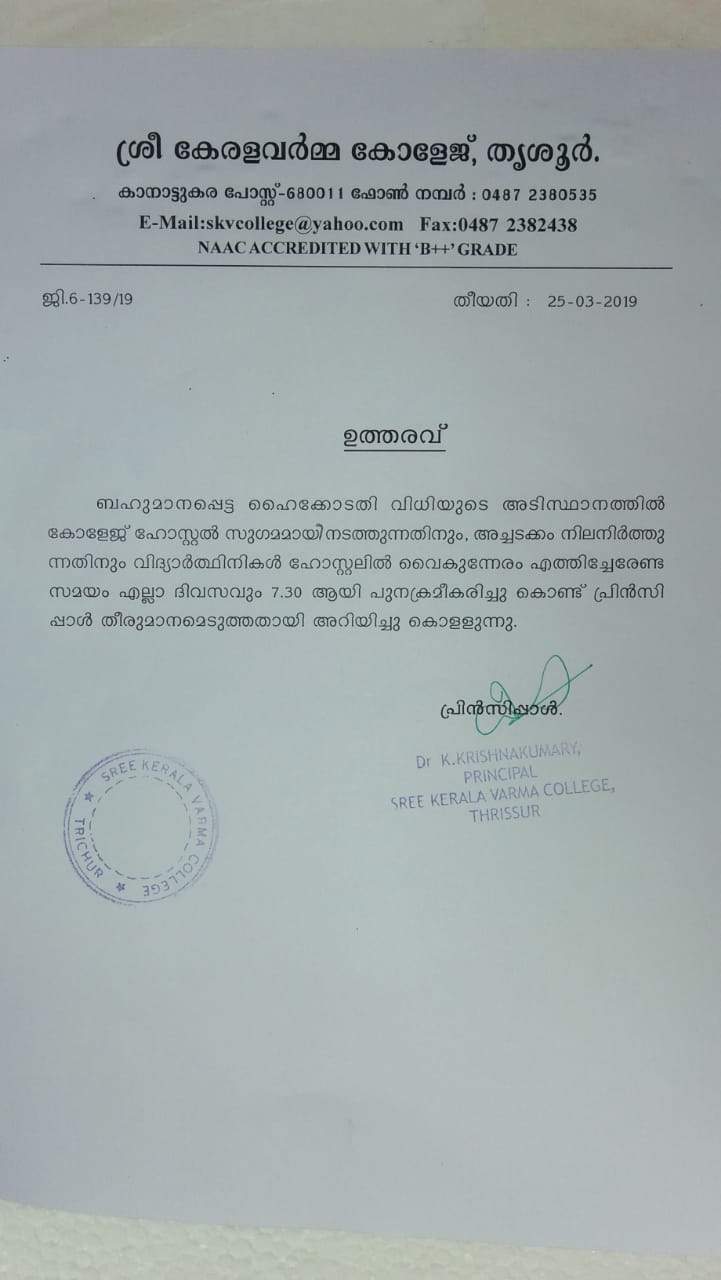 Following a petition by an alumna Anjitha K Jose, the Kerala High Court had ruled, "The petitioner is an adult. Her right to question cannot be compromised based on parental consent. Even if the parent had signed, the instruction cannot be violative of fundamental rights."

Condemning the new circular, Anjitha says, "The new alteration is legally invalid. It wasn't decided according to the convenience of the students. This will not affect the students. They will enter the hostel only at 8.30 pm." The students had previously decided to conduct an event to celebrate the verdict and the 8.30 pm in-time. They say that they'll, however, go forward with the event till 8.30 pm, without any change in the schedule. "We are now thinking of moving against this legally. The new decision is highly unacceptable," says Salmath K P, a student who was active in the protest.

The meeting where the new in-time was decided, was, reportedly 'highly confidential', with no student representation. They were informed about the points of discussion by a parent who was present there, who managed to record it. The said parent, who spoke in favour of the students was allegedly threatened by the college authorities.

Students who had accessed the recording said that the warden and the principal have also made up stories to support their claims and defame the students who were leading the protest and filed a petition in the High Court. "One such story goes like this. Rinsa Fathima, a student who's leading the fight, took another student to an abandoned building. There, a group of 10 hooligans tried to rape them. Petrified, they called the warden, who immediately reached the spot and rescued the girls adventurously," narrates Salmath. "The warden and the principal have called my parents and made comments questioning my character and conduct," she adds.

Repeated calls and messages to the (recently retired) principal Dr Krishnakumari did not yield any response.