Fashion show at Jamia Milia cancelled for being against Islamic ethos: Was protest by student group fuelled by elections?

A group of over 10 students, under the banner of ‘Students of Jamia’ later protested outside the venue as they deemed the fashion show immoral

A fashion show organised by Delhi's Jamia Millia Islamia as a part of the Faculty of Engineering and Technology's (FET) three-day annual festival, Xtacy, was cancelled on Saturday after protests erupted on campus. The protesting group consisting of 10 to 12 students from various departments of the institute claimed that such activities were "against Islamic ethos" and Jamia’s "tehzeeb" (culture).

The protesting group, which calls itself Students of Jamia on their official Facebook page, slammed the event in some of their posts on Saturday, describing the events as "peak level of immodesty" and "fuhash (fahash) programs". The hatred is strong and almost palpable, "Dear brothers, If you are left with even a bit of ghairah (zeal) in yourself, come out and stop such evil acts. Come out against such filth so that we won't be ashamed on the Day of Judgment," read one of their posts.

The question of cultural practices in Jamia is a loaded one, "The culture of Jamia is connected with its founders and their ideas and the website also states that motto. Jamia's culture is connected to Islamic ethos because an idea doesn't come from a single person but from different ideologies and people like the founders such as Maulana Mohammad Ali Jauhar, Dr Zakir Hussain. They wanted to restore Islamic values through education. What we are against is the objectification of women. Events like fashion shows promote objectification," a member of Students of Jamia group told Edex.

One of the members of the organising committee for the events told us that this was an event with the consent of all the participants, and they didn't know if this a political gimmick. "This fest and the fashion show have been happening for many years. This was not the first time that we organised something new. Last year also, this took place and we were also a part of the organising team. This type of incident took place only this year, it seems as though 2019 has become the year for elections and everything around us amounts to that. This makes the university look bad. It gives the impression that it is a deeply regressive university but the administration and teachers were with us on this. This is our Bajrang Dal," the organising committee member said, wishing to remain anonymous.

The organisers had the required permission and support of both the faculty of Engineering and the university's administration to host these events.

"It all started the day before the fashion show, on March 29 around 12 pm in the afternoon the organisers were called to speak to the members of the protesting group. At that point of time, they literally threatened us saying that we should not have any kind of connection to these kinds of events or programmes and if we do not agree with them, they will do it their way. A group of 10-12 people came that day while some other events like dice games and card games were going on, and they argued that students were gambling. Our team tried to speak to them but they were not ready to listen. They wanted to intimidate us, they didn't listen and left from the place where the fest was going on," said one of the organisers. 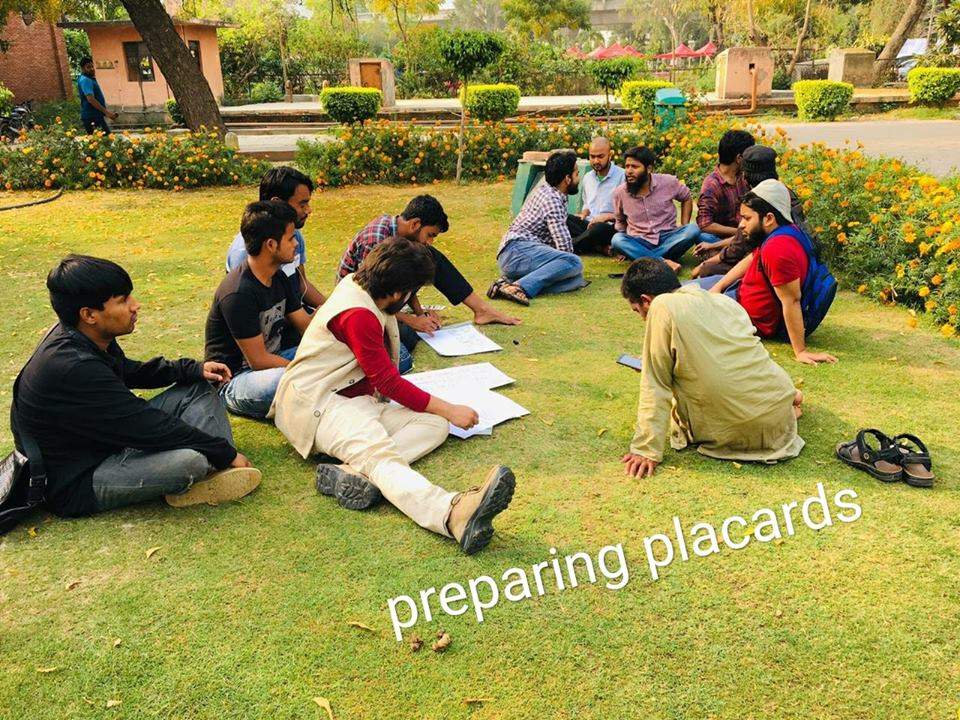 Members from the protesting group 'Students of Jamia' preparing placards for the protest at Jamia Milia Islamia (Pic: Facebook)

The fashion show, called Tarz-e-Libas, was scheduled for 5 pm on Saturday. The protesting group came back with more men at around 4 pm. "Our event was scheduled to begin at 5 pm. At around 3:30-4 pm these protestors came back. They told us that we cannot conduct the fashion show as it is against Jamia's culture and also against Islamic ethics and values. We tried to explain that we had all the required permissions from the administration and that they have been really supportive throughout. They told us that if we go ahead with the show, they will put a stop to it. Their temperament clearly showed that if we allow the teams participating from other colleges on to the stage, as it was an open theatre they could likely face security issues. We cancelled the show only because we feared the protestors would get violent. We did not want to risk the teams that had come from other colleges getting injured here. Their safety was our responsibility," the organiser added.

However, one of the members of the protesting group claimed that they tried resolving the issue peacefully. "Multiple times we tried to speak to the organisers and the administration but nothing worked out. Before the event was scheduled to begin in the evening, we went to the open theatre and protested peacefully. People are saying that we forcefully did all of this, but if you think tactically, there were hundreds of organisers and students and we were just 10-12 students. Even if we wanted how can we forcefully do something?" he added. 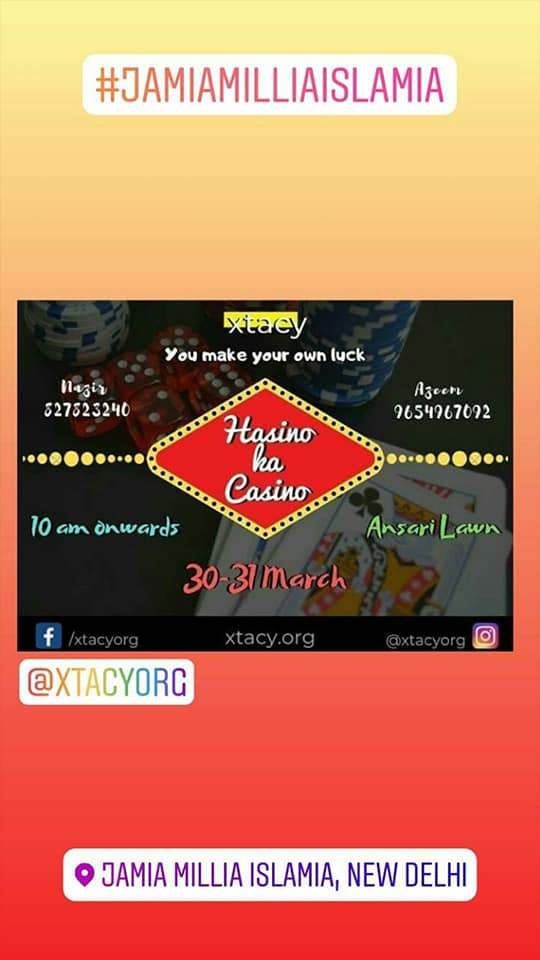 A poster of one of the events that the protesting group claimed to be gambling games (Pic: Facebook)

The member of the Students of Jamia group also claimed that they had a peaceful approach throughout. "We first went to the proctor, administration, we spoke to the organisers but they were not ready to listen. We tried resolving it peacefully. We said it was wrong, some gambling games were also going on, the name of the fest also was related to a drug's name, if you search for the word 'xtacy' really bad things come up. We said that we have no problem with the fest but we only have problems with the fashion show," he stated.

Fearing that it would create a security problem, the fest organisers cancelled the fashion show. "The administration was very supportive all this while, we could carry on with the other events scheduled for later in the day because they had given permission. They have assured that legal action would be taken against such incidents and the protestors in the coming days," one of the organisers told Edex.