Bina Seth Lashkari, the founder of the iconic Door Step School in Mumbai, speaks to us about the importance of education and why every child should be introduced to learning at an early age

We all are quite used to seeing the mobile versions of juice shops, food trucks, or even libraries on the streets of Mumbai. However, if you visit areas such as Cuffe Parade or Colaba now, you are most likely to notice kids from the nearby slums, dressed in clean uniforms running towards a school bus. Except, the bus isn't moving away from them. Surprised? It's because the bus itself is their school — behold the School on Wheels, a mobile classroom that has been educating slum kids for a decade now.

The brainchild of social worker Bina Seth Lashkari, there are seven buses under the School on Wheels initiative in Mumbai currently. Bina made the distant dream of these children to attend school in uniforms, sit in a classroom and study possible with her initiative. Founder of the Door Step School, she started the NGO with the aim of improving literacy levels among the marginalised sections of society. For the last three decades, DSS has been providing education and support to the often-forgotten children of pavement dwellers, slum dwellers, construction site families and many other underprivileged families. 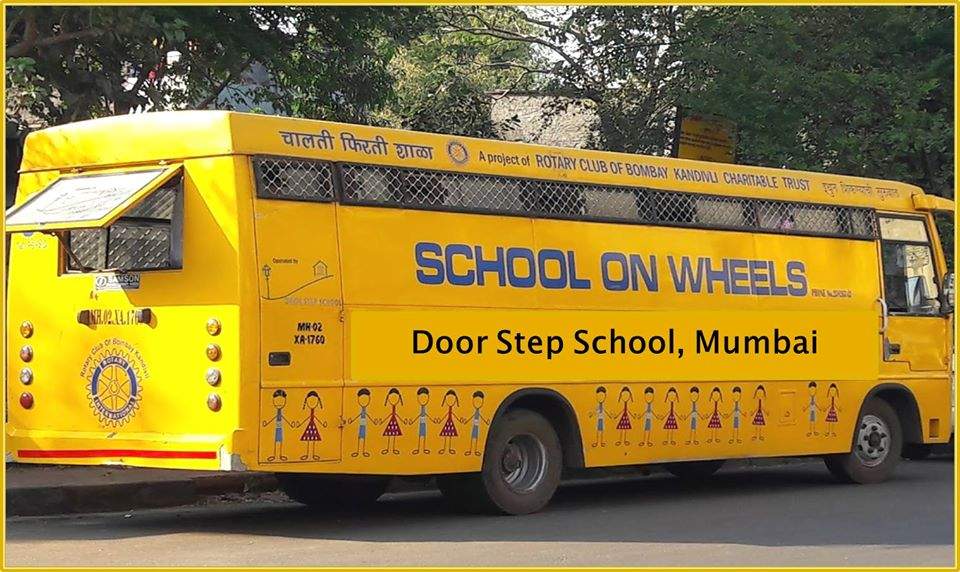 DSS has already impacted the lives of over 50,000 children until now. The School on Wheels — which is our favourite programme — conducts classes at four locations simultaneously with more than 100 students being taught inside one single school bus. "We found children in railway stations, near the Gateway of India and other open areas and we starting to teach them there. But this was not a good option as they couldn't concentrate and there were a lot of distractions. That's when we thought about getting a vehicle, equipped with the basic items that a classroom ought to have, that can go around in the city and teach these kids. That's when we introduced this concept. The classes last for at least two to three hours and they are taught English, Mathematics and General Science," says Bina. They expanded their operations to Pune in 1993. Now in both Pune and Mumbai, nearly one lakh students are taught everyday by over 500 teachers, most of whom are women from lesser privileged families, and are also former students of Door Step.

Many of these children are not enrolled in school and have limited access to books and a place to study. Additionally, many children drop out of school to work or care for younger children. With neither support nor resources at home, some children also suffer from very low learning capacity. Bina along with DSS has been trying to bridge this gap by bringing education to the 'Door Step' of these children.
We ask, curiously, what's inside the bus, to which she responds, "A blackboard, books, teaching materials - it's just like a classroom. Window panes open inside which the students use as desks to keep things and write on. They sit on the floor. We mainly focus on activity-based learning to sustain the kids for a long time and get them attracted to this form of study. They need a lot of motivation. They can neither concentrate easily nor sit at one place for long. That is why we have a different value system and discipline in place whereby we begin with basic etiquettes and then go from there." Currently, there is also one bus that is meant for tribal children in Sanjay Gandhi National Park. 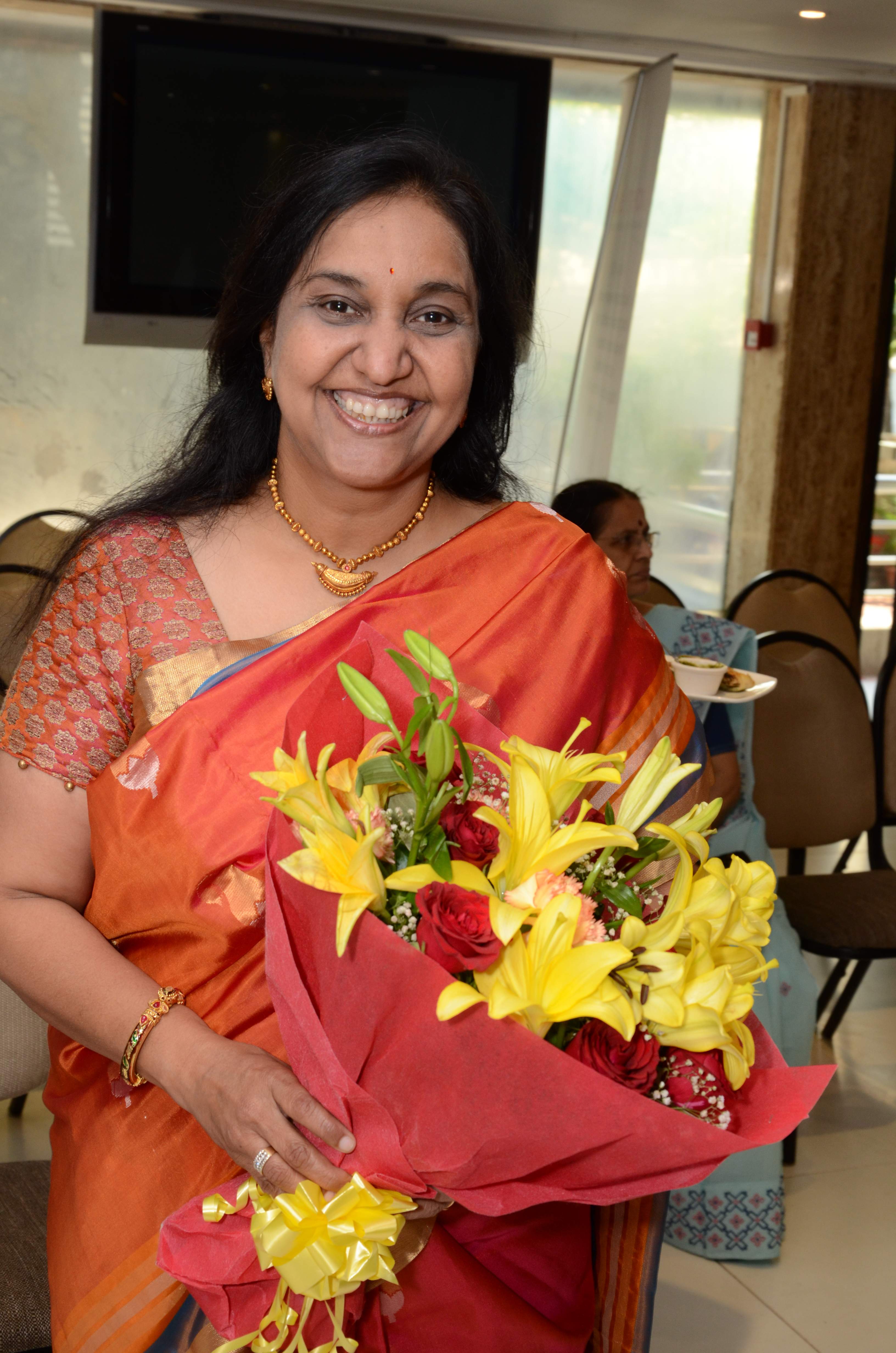 Education is the only answer to a better life, money can come later. Education should be introduced at an early age so they understand the importance early on

What led to the formation of Door Step School?

In 1988, Bina was a student and was pursuing a Masters in Social Work degree. As a part of her college project, she visited a municipal school to find out why a significant number of children dropped out after class 3 or 4. "I found that most of them go to work as daily-wage workers, and that's why their parents do not send them to school. Most of them worked in the fishing industry — loading, unloading, and cleaning fish. When I spoke to the children they said they would like to learn but the school timings clashed with their work timings and so they are unable to manage. However, the parents said that they wanted them to work and earn money and that they hadn't come from the village to get them educated in the city but for better work opportunities that pay enough for the family to survive," added Bina.

How the buses started rolling

Once they decided to offer these kids education, it still wasn't easy to get them there. "There was a lot of resistance from the parents. Whenever I used to enter their houses the parents would hide their kids and refuse to talk and say things like they haven't come back from work. All my classes begin in the evening, after their regular working hours. We couldn't stop them from working as there would be more resistance from their parents in terms of attending classes. The first thing that we did was to convince the parents that we will run these classes during their free time and not during work hours. Even after this, getting girls to come was a problem as they were involved in household chores in the evening and the parents didn't want to let them go. All our efforts were directed towards solving the problem of illiteracy in the family so that at least the next generation is literate. We had to convince them as to why basic reading and writing is important so that they don't get exploited in their everyday lives. The parents often asked why should they study, they won't become officers or get high paying jobs. We want to make them more confident about their day-to-day lives. Then at first we could gather 25 students and began our journey — from which emerged the first success story of a girl who worked in the fishing industry," says Bina. 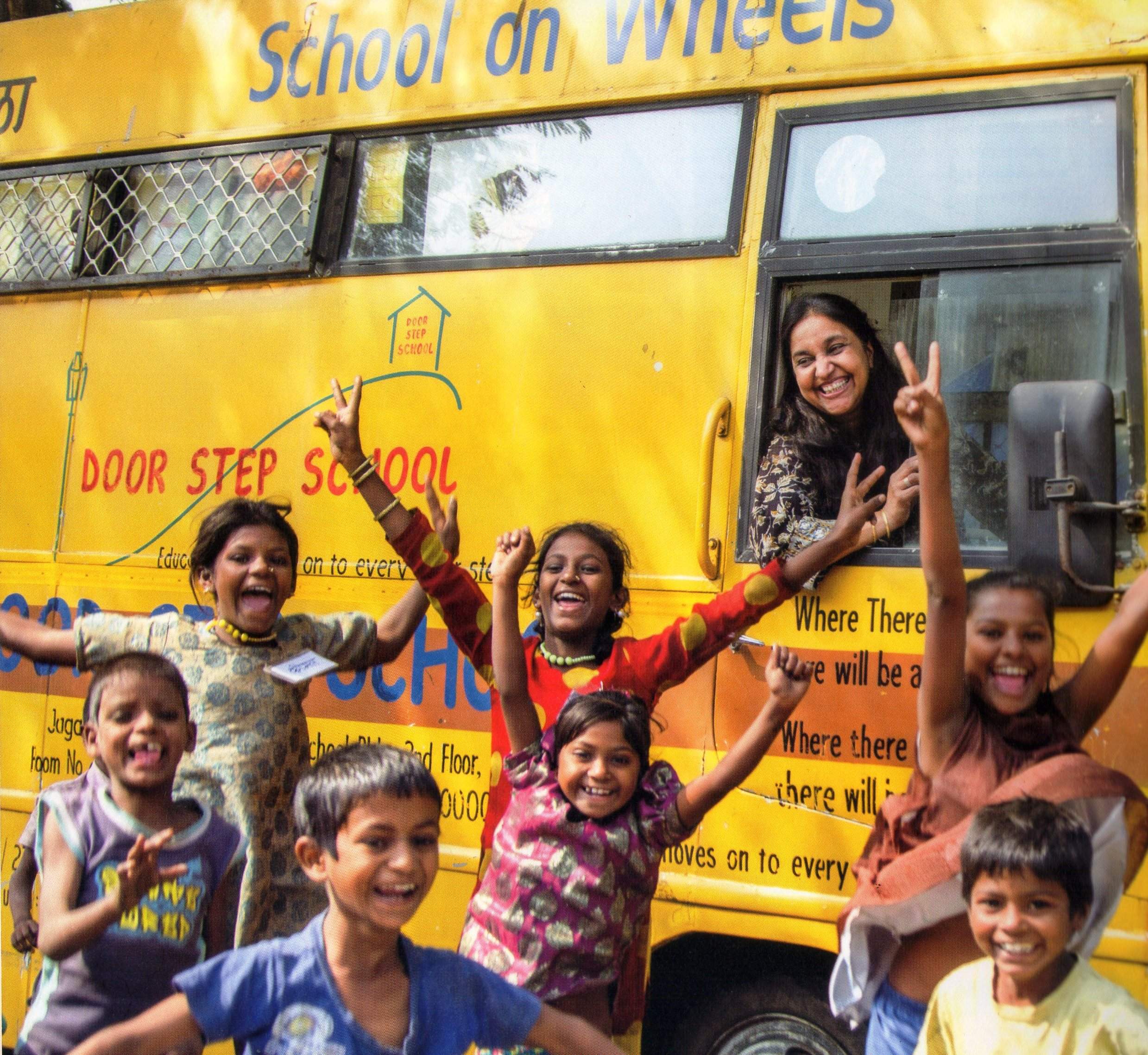 What is that story? After getting math lessons, one of their girl students stood up to her employer and said that she'd cleaned 5 kg of fish when he had written only 3 kg in the book where they were keeping a record for their weekly payment. Bina says that the young girl told her that she'd corrected him. When the man responded saying that she doesn't know how to read and write, the young girl quipped that she now knew how to read numbers."She told me that he has been cheating us for so many years as they didn't know how to read. This is what we told other children and parents to convince them about the importance of education," says Bina.

Door Step also works with children from the age group of 3-6 years as they want to intervene early and not wait for the children to go to school and then drop out. "Our major focus is to teach them the basics of language, build on that and improve their vocabulary. A lot of people told us that we should teach History and Geography, but I feel that the base is the English language. That's why we encourage a lot of reading," explains Bina. After the children complete their non-formal training under DSS, then they go to government schools. Most of them can't afford extra classes after school and that's where DSS' study classes come into the picture. Study classes are extra tuition classes in the slums. 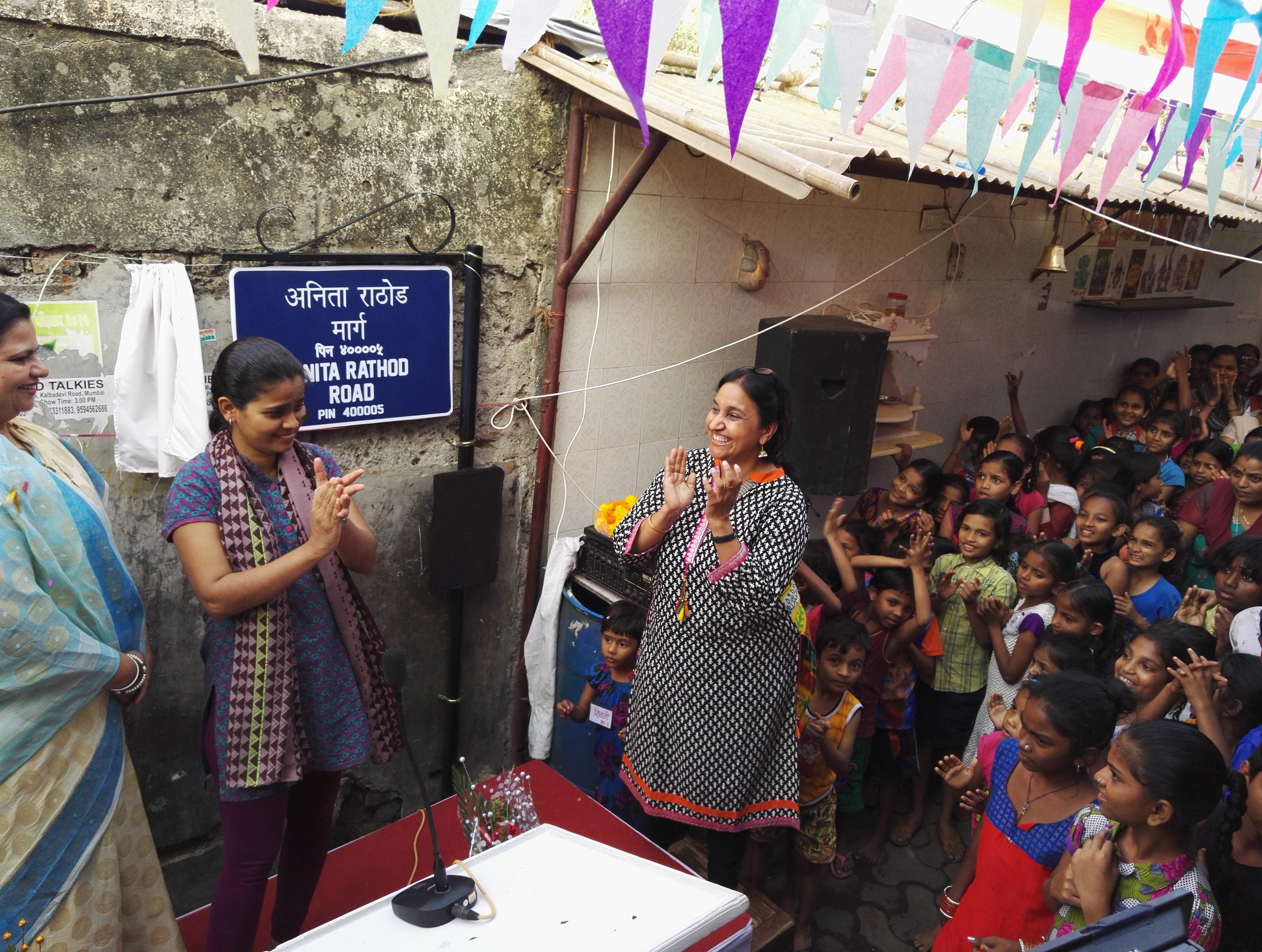 Happy to study: The NGO's interesting initiative to motivate children to study by naming the no-name alleys and narrow streets in the slums after kids who are academic achievers, has been a huge success

Name and fame these kids

Apart from these programmes, Door Step had also come up with an initiative where they name the slum streets after the names of children living there who are achievers and have shown great potential in what they are doing. "This initiative was started to encourage children to come and study. The slums are so huge that we didn't know how to talk about one child's achievements that would reach the entire population in that area. So we decided to put up boards with names of the children instead of street names. Wherever these kids stayed, the corresponding street was named after them and this got an overwhelming response," adds Bina.

Door Step also has plans to set up mental health centres in partnership with schools. They have already begun speaking to school authorities about this in Mumbai. "We found that children were still dropping out even after attending study classes. The parents told us their children can't sit for 6 hours and the schools don't teach much in terms of practical learning, and that in our class, they are able to learn more. We spoke to several schools about this and conducted school audits. We have already started remedial classes for those students who are slow learners," says Bina, adding that counsellors want to go to schools and conduct classes rather than visit every slum there is. Volunteers are easier to get when there is a tie-up with schools and the reach is more significant too. 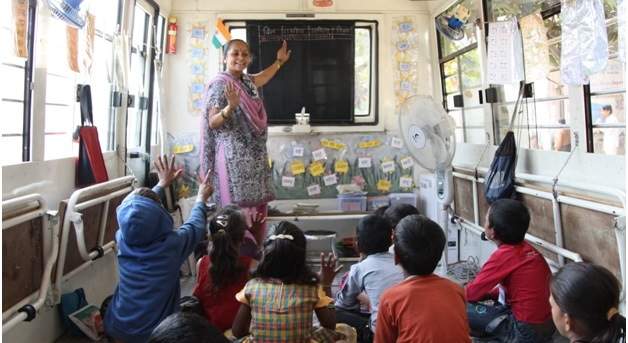 "If a child is disturbed they can't study, an intervention required in terms of mental health. We should have some counsellor or mental health worker in every school. Then they can deal with behavioural and emotional problems that the children go through. We are trying to make it possible," concludes Bina.