Bishnu, better known as @VAdkri in the Twitterverse, informs you about so many unknown facts about ancient Odia and Telugu culture and history that will fill you with some newfound pride. Check it out

What do you do if you are born in Paralakhemundi — an ancient town in Odisha that shares its boundary with Andhra Pradesh, becoming a kind of amalgamation of both the cultures? If you heard facts like the architect of Odisha Krushna Chandra Gajapati was born in a nearby village and that one of the first railway lines went through Paralakhemundi? The old town is also home to Gajapati Palace, the fort of Gajapati rulers, which invariably became known for sangeet and sahitya (music and literature), which it still remains. What should you do if you are born in such a culturally significant and historically poignant place? You do what Bishnu Mohan Adhikari did. He absorbed it all, enriched himself and is now sharing all the knowledge that he has encompassed growing up in Paralakhemundi via social media. And he has over 4,300 people like us hooked to his Twitter handle because of it.

Quiz, debates, essay writing, drawing and other competitions — Bishu has been a part of them all and aced them as a child. He even won awards from the current Chief Minister of Odisha Naveen Patnaik for standing first in a debate competition in 2008 and again in 2009. "I come from a joint family where reading books was our favourite pastime," says Bishnu. But when the 25-year-old found himself in a job with free weekends at his disposal, he wanted to increase his knowledge by reading more and more. But why hold all that knowledge hostage in his mind? He decided to share his knowledge on social media and that's how @VAdkri on Twitter came to be in 2018. So basically, this Twitter handle is a storehouse of information in Odia, Telugu and English, where the youngster shares historical tit-bits of his home state and even Andhra Pradesh. So, if you want your daily fix of ‘did-you-knows’, start following the handle ASAP. 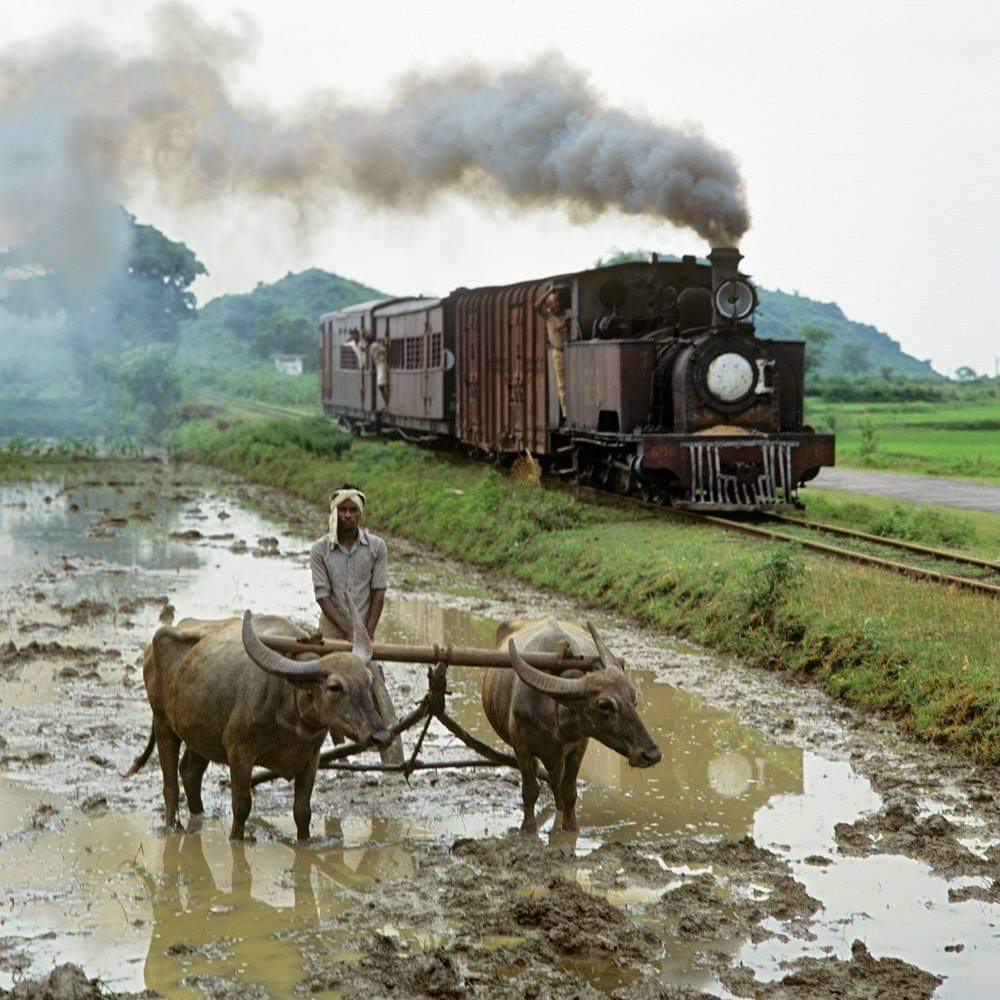 One of his posts | (Pic: Bishnu Mohan Adhikari)

What kind of content can you expect from Bishnu? Take for example his thread on the 49th Raja of Manjusha, Srinivas Rajamani. He was a wrestler who had a mango orchard that housed tigers. Among the many schools he built, one of them is now known as Srinivasa Raja Mani Zilla Parishad High School and it recently celebrated its centenary year. Sounds like a cool dude, right? Then, there are the Tala-patra of Visakhapatnam, which are ancient palm leaves manuscripts in Odia which contain information about how to treat major and minor elements. These are just two of the recent threads he's posted. Expect a lot more once you started following him, even the occasional #travelgoals pictures.

There is also Bishnu's YouTube channel which might not have many subscribers but it has priceless videos of those folk artists who were known to go from village to village and sing to earn their daily bread. And so much more. All this is the result of all the time he has given to studying Odia literature and culture, and that of surrounding areas, over the weekend. So passionate he is about the culture that, "I did not want to give my name to my Twitter handle. I want people to know my work, not me," he says humbly. He has written many columns for newspapers and is a regular contributor to Wikipedia as well. "I get many Direct Messages, where people ask me doubts or ask me more about one subject. I do my best to respond to them all," informs the Assistant Engineer who works in an MNC in Bhubaneswar. 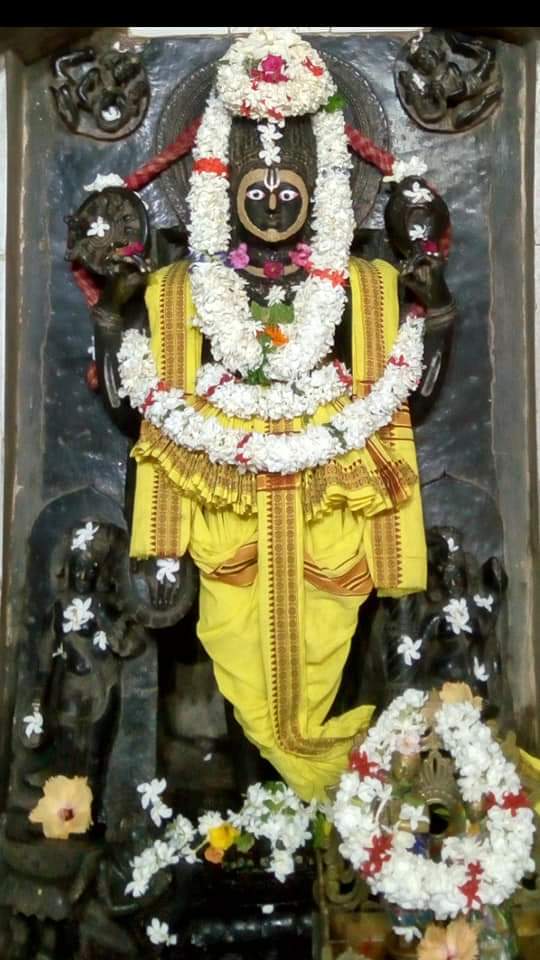 One of his posts | (Pic: Bishnu Mohan Adhikari)

Bishnu's forte is the Kalinga era. But so is the present era because he ensures that he is updated with the news as well. And because he is aware of recent news, like the unearthing of 28 copper plate inscriptions, scripted in Telugu, Nagari and Odia, in Kurnool on September 8, he is able to inform others and post more about it for his followers. Bishnu likes to go a step above informative content, he also keeps his audience engaged with interactive content, like the 'Guess the Ancient Temple' posts that he puts up with picture clues. It's for these reasons and more that he has a strong following of several MPs, MLAs and other prominent figures, including MP Ram Mohan Naidu Kinjarapu; Country Director of ICRISAT Arabinda Kumar Padhee and Minister for Tamil Official Language and Tamil Culture, Government of Tamil Nadu K Pandiarajan, on Twitter.

"I've also started putting out traditional recipes," says Bishnu who pursued his BTech in Electronics and Communications Engineering from Centurion University of Technology and Management. Among the many other things he does is helps artisans sell their products and collect postage stamps. A treasure trove of information, indeed! 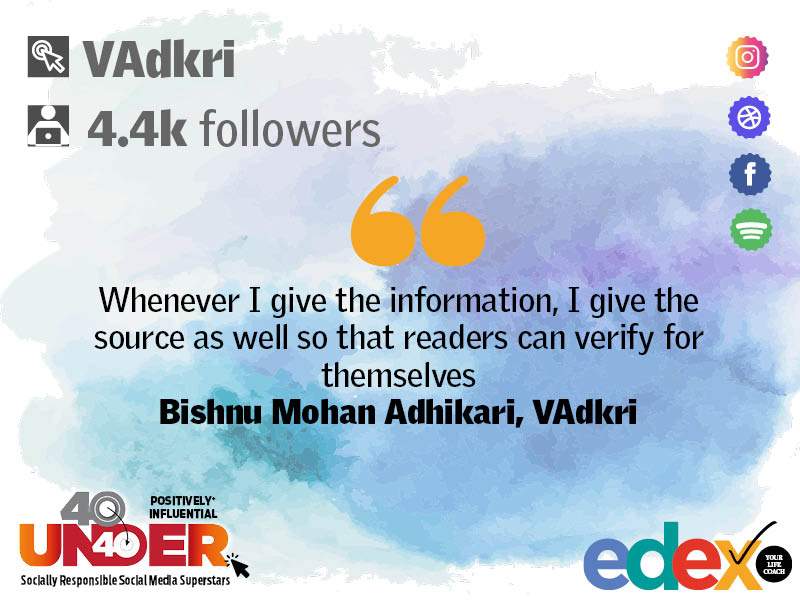