Lady of the Lakes: How Madhulika Choudhary is saving Hyderabad's water bodies

Choudhary has worked for over four years in this field and is still raring to go. She continues to encourage volunteers to join her on her mission

Legend and research have it that the fourth Sultan of Qutb Shahi dynasty Ibrahim Qutb Shah Wali, also known for building Hyderabad's iconic Hussain Sagar lake, built Ibrahim Cheruvu as a water body that would help the royal garden Ibrahim Bagh flourish. At that time, this lake was also known as Ibrahim Tank. A nobleman during the time of his great-grandson, Abdullah Qutb Shah, commissioned a channel for it and since then, the lake has been known by this nobleman's name, Neknam Khan and rechristened Neknampur Lake. And when Madhulika Choudhary first cast a glance on this lake which is more than 445 years old, it was a garbage dump.

"Frankly, everyone makes a huge hue and cry about saving the environment, but in reality, nobody wants to do anything about it. Because saving the environment means changing our habits and overcoming our own laziness. We are a generation of hypocrites," says Madhulika Choudhary. And how would she know this, you ask? Choudhary, who is today known for turning the deplorable Neknampur Lake into a biodiversity hotspot, did not have it easy. It was like the universe was conspiring against her. Builders would try to bribe her, the crops she would plant around the lake would be uprooted the next day, the community around, who should have seen her as a saviour of sorts, doubted her intentions. But she did not back down nor did she grow bitter. Because, as she recalls setting eyes on the Neknampur Lake for the very first time, she shares how, "There is a sea change in how I am today and how I was just a few years ago, which is why I feel that I did not choose the lake, the lake chose me."

Born in Pilani, Rajasthan, Choudhary was a former professor at ICFAI and Sharda University before shifting to Singapore. Soon she felt the urge to come back to India and contribute to it in one way or the other. She chose to shift to Hyderabad, a city where no one would know her, and started Dhruvansh. "Dhruv tara or North Star is the celestial body that is known to show the way to all those who are lost, even in extreme darkness," says the 37-year-old, stating the reason behind the name she picked for her NGO which she started in October 2014 with the intention of working solely for the environment. Initially, the mother of two would go about schools and spread awareness about renewable resources, global warming and more, but one look at the Neknampur Lake near her house and life, as she knows it, was changed forever.

To improve the condition of the lake, Choudhary would conduct cleanliness drives, something she relentlessly conducts even now every Saturday, and the next day, someone would have littered around the lake again. Then there was the task of encroachments. "I noticed that no one was attached to the lake," says the former teacher. But after tirelessly working for the lake, today, it's a biodiversity hotspot, resplendent with floating islands made of 2,500 square feet of gunny bags, styrofoam, bamboo and coir. This island is a floating treatment wetland for the lake as it carried over 35,000 saplings on it. These efforts have paid off as today, the lake is home to 132 species of fauna, 150 plus species of birds and so much more. They have also contributed to Yerrakunta Lake, also known as Shaikpet Lake, where she is particularly happy with the community as they keep her informed. Her focus is currently on Langer Houz lake. "The mission right now is to get people to this particular lake and with their help, restore it," she shares. 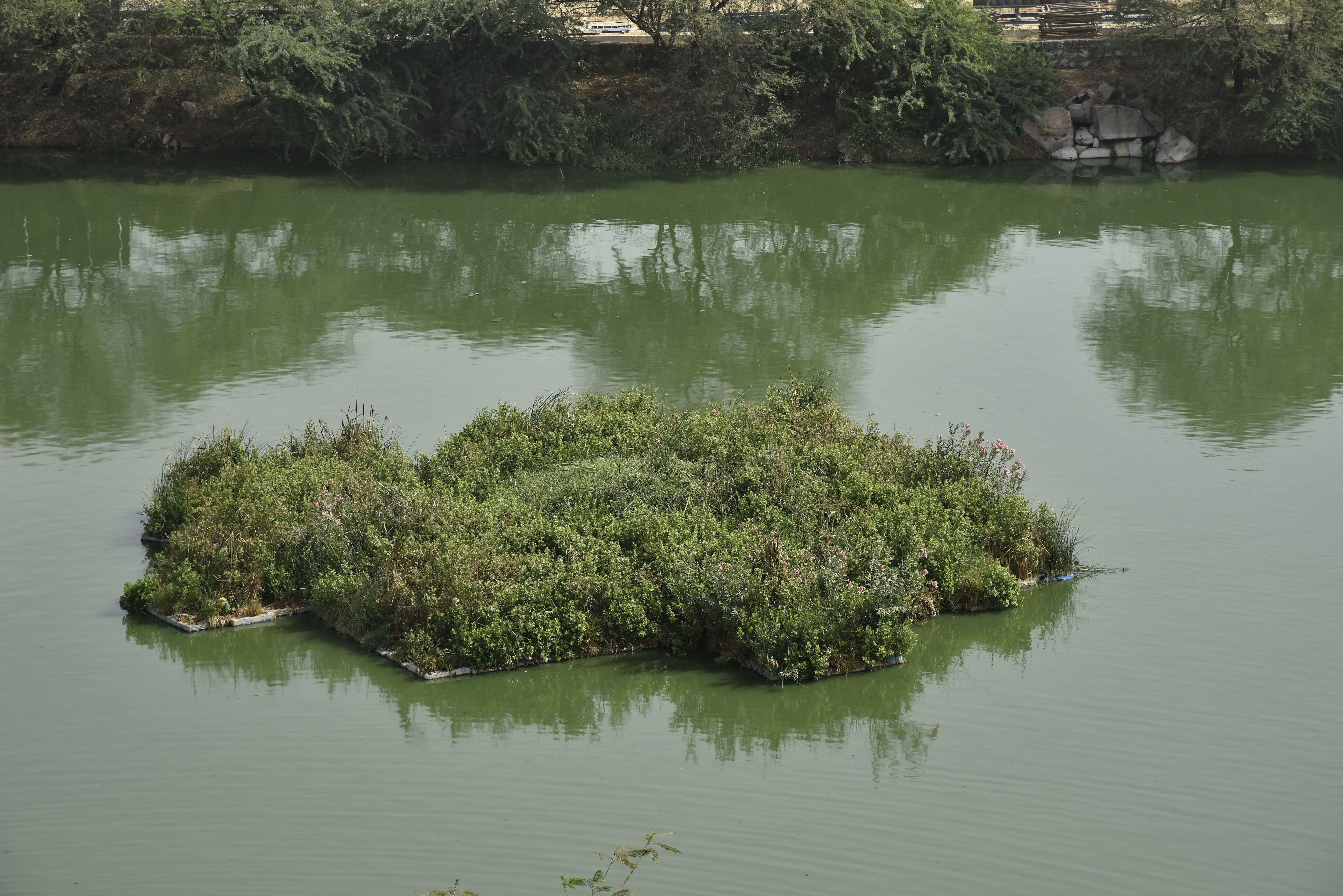 Island of green: The floating island on a lake | (Pic: Vinay Madapu)

After winning several awards for the restoration of Neknampur Lake, Choudhary felt that things might get a tad bit easier, but alas, it was not so. "Which is why I always think of myself as a beginner, starting work right from the scratch," she shares. Choudhary strongly believes that urban lakes which are in need of saving don't need big fat budget allowances, "if they receive our love, patience and care," she highlights. Government allots crores of rupees when a few lakhs would do as things truly are not that expensive, she has discovered. It is the maintenance that might require some backing. "People also keep asking me about when will I ask for my rights now that I have practised my duties. But I feel that by practising my duties of taking care of my surroundings, I have already availed the right to a clean and healthy atmosphere," she reasons. And by doing this, she has enabled us to enjoy our right to it too.

What we can do to help her with her cause:

- People need to understand that until we take things in our hands, no government is going to do anything for us. So we need to think positive
- Love the environment and nurture a genuine desire to serve it
- Participate in their cleanliness drives