Oud player Bonny Abraham is out with his debut album and song Djinn. Here's his story

Bonny Abraham, a self-taught oud player speaks about his musical journey, how he got share stage with A R Rehman and the release of his first album song

Music is what I enjoy listening to, says Bonny Abraham (27). Though he's just recently released his first song Djinn, Bonny is not new to the field of music. In fact, he has shared the stage with music legend AR Rahman. But what makes him famous and unique is his love for the Arabic instrument oud. The Thiruvananthapuram-born multi-string instrumentalist, says, "I never had a teacher to teach me to play the guitar let alone exotic instruments like the oud, saz or pipa. I am a self-taught musician. I follow music composers, players and singers online and learn organically."We speak to him to know more about his journey in the world of music.

1. At what age did your journey into music begin? Tell us when and how you fell in love with music.
I have loved music from the time when I was in school. When I was in class 4, we used to gather and sing songs. Later in class 7, I picked up the guitar and started playing it by myself. Though I tried attending classes, it did not help me and I found them to be boring.
Those days, rock bands like Motherjane, Avial and Coldplay were trending and these bands influenced me a lot. I loved their guitar solos and rhythmic progressions. I also loved Yanis Orchestra. As days passed up, I started building upon my talent by watching YouTube videos. I wanted to study at KM College of Music and Technology in Chennai but my parents were reluctant, so I pursued a degree in Visual Communication and Audio Engineering in Coimbatore. Later, I went to KM College to pursue Western Classical Composition.

2. How did you learn to play the oud?
I found this artist named Farhan Ensemble from the Middle East who plays the oud. While he plays the oud, his team members play the Kemenche or Kemence and another kind of percussion instrument. I was fascinated by the kind of music they produced. I followed them on YouTube and watched their videos regularly. One day, my father, who used to work in the Middle East, called and told me that someone left an instrument in the hotel and that its been lying in the storeroom for a long time. He asked me if I would be interested in playing it. Though I didn’t know that it was an oud, I asked him to send it through a postal service. When I received it, I was sad because it was broken and in bad condition. But, on the other side, I was happy that it was an oud.After talking to several people, I finally found someone who could repair it. When I started learning to play, I observed that there are not many ethnic musical instruments that people play. Everyone is into playing the guitar. I spent a lot of time on the internet and on YouTube watching people play the oud. That is how I learnt and improved. 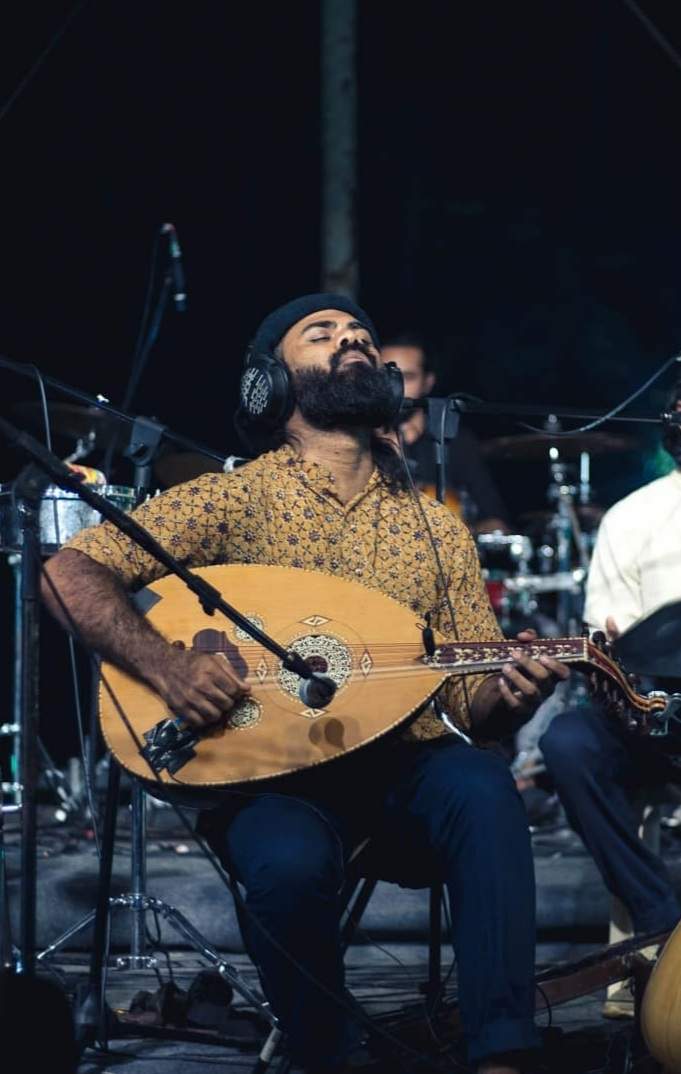 3. You've played on stage with AR Rahman. That's a dream come true for any artist. How did that happen?
When I got the oud from my father, I was still studying in the KM College of Music and Technology. I used to get to perform in a lot of concerts and that’s when music legend AR Rahman had come to our college. He observed me playing the oud and expressed his happiness and appreciated my interest in such traditional and ethnic musical instruments. I think that was the best moment of my life. Later, MTV auditions came to the college. I took part and they liked me playing the oud. I was called to Mumbai and the atmosphere there was totally different. I played one of the songs from the movie Bhoot. It not only came out well but I got to share the stage with AR Rahman.4. Tell us about your album and your first song.
It is a dream come true for any musician to release their first album. The album Dune has five songs in it and we released Djinn in the month of November. I wanted all the five songs to be different. The first song, Djinn, has more of a Middle East flavour to it. The remaining four songs are yet to be released and we hope to do it soon. Currently, the work that has to be done in a recording studio is on hold due to the pandemic.