Meet the Mohans, Yakshagana's first family, who are making the art form stronger

If you ask the native Bengalureans about Yaksha Degula, then they will tell you a long story dating back to the 1960s. Such is the history created by father-daughter Yakshagana artist duo, K Mohan and

When K Mohan came to Bengaluru in the 1960s from his native place, Saligrama in the Udupi district, he was only 25 years old. Amidst the rapidly growing city and hectic work schedule, he missed performing Yakshagana, a folk art that is mostly performed and famous in the coastal Karnataka region. His love for the art did not let him live without practising it. In those days, and even now, Mohan is predominantly known in Bengaluru for his Yakshagana performances. Though the retired banker doesn't perform due to various health issues, he has made sure that the roots of folk art have run deep among Karnataka's people. He explains, "My grandparents were patrons of Yakshagana and I grew up watching them perform in shows every day. How can I leave this folk art that's in my blood? There were no days that went past without us practising Yakshagana when I was in Saligrama. In Bengaluru, I found some like-minded people who were from different places in the coastal region and started practising it every day. Though I was not a full-time artist, I made it a point to dedicate a few hours every day to Yakshagana." 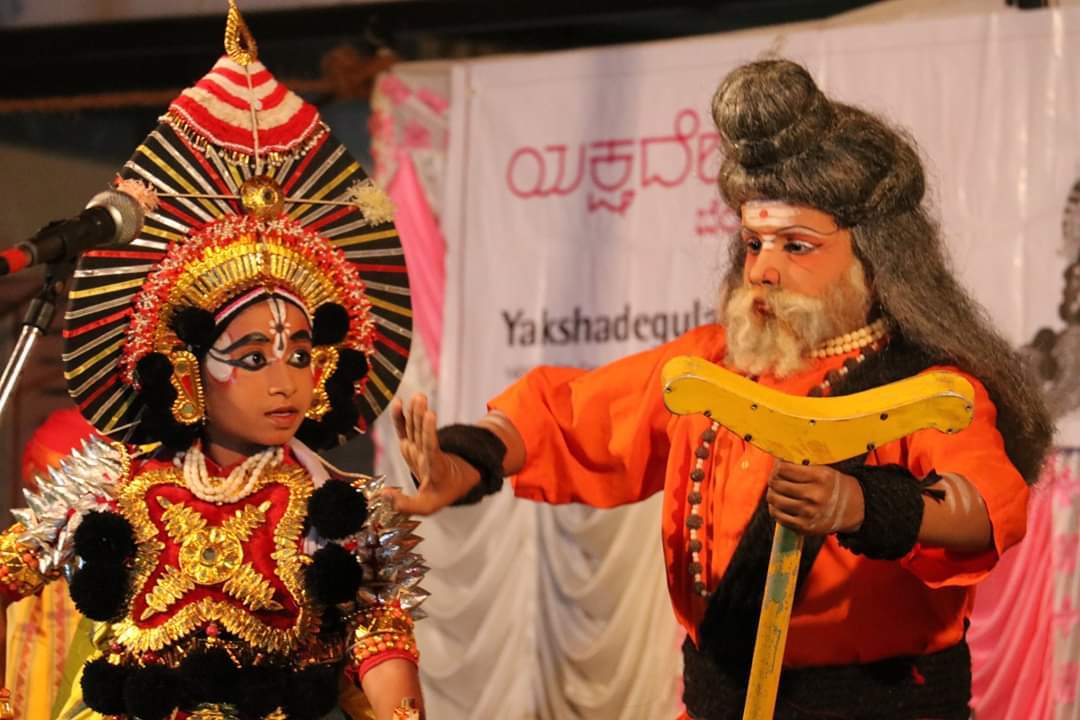 One of the mythological stories performed by children

As the days passed by, Mohan formed an organisation called Yaksha Degula, in 1980, under whose banner many artists would eventually come to Bengaluru and perform Yakshagana. Over time, it even became a source of income for many of them. The places in Bengaluru which were known for hosting dance and drama performances, became famous for Yakshagana as well. People would sit patiently and watch the artists' flawless performance. "While the artists came from different cities and performed for eight years, I decided to register my organisation in 1987. Those were the golden days for artists as the folk art flourished and people encouraged it. The halls would be jam-packed and it was a treat to our eyes. From then on, there was no looking back and we went on performing hundreds of shows across Karnataka," he adds.

And then, time passed by. The internet arrived. People changed

All in the family
Since Mohan wanted the next generation to absorb and learn this folk art, he introduced both his daughters, Priyanka and Preethi to this art form. Priyanka Mohan was the one who decided to carry forward her father's legacy. And she did it to such an extent that, now, she is one of the most famous Yakshagana artists in Bengaluru. Priyanka narrates her journey, "I was only six years old when my father started taking Yakshagana classes at Yaksha Degula. It all started with me and my younger sister. Then, a few more children in our neighbourhood took interest and started attending classes. We formed a kids troupe and would go around performing during festivals and cultural events. In the 1990s, there was a corporate boom and there were several events during the weekends. The corporate world was very keen on exposing people to Kannada folk art and culture, and hence, there was a lot of support. Therefore, the Yaksha Degula kids troupe would be present in every event that the corporates conducted. Our batch has completed more than 300 shows in Bengaluru." 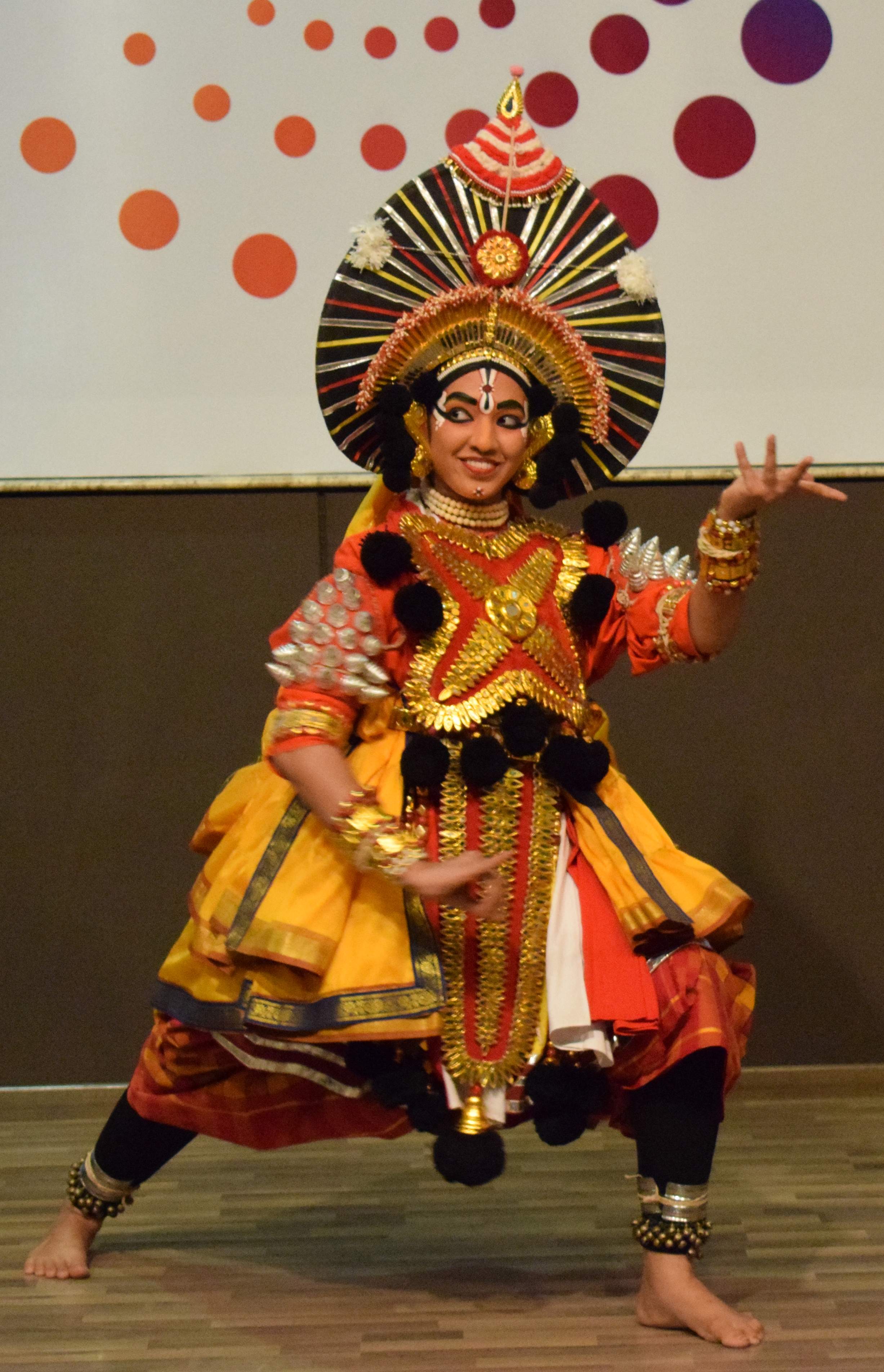 Priyanka Mohan during one of her performances in Bengaluru

The members of Yasha Degula's first kids troupe are today spread across different cities and are doing a series of different jobs. Priyanka's younger sister, Preethi, is a doctor by profession. But the batchmates make it a point to meet at a reunion every year. You will be surprised to know that Priyanka is also a software engineer and she started her career with Wipro. What lead her to become a full-time artist and a teacher is an interesting story by itself. This 31-year-old artist explains, "When my father started classes at Yaksha Degula, his intention was to spread awareness about this folk art. Hence, my father did not charge a single penny. Even today, the classes are for free and they are not a source of income at all."

The unique thing about Yaksha Degula is that it has encouraged many women to take part in this folk art. Usually, Yakshagana is seen as a male-dominated art form in the coastal region. When we asked the reason behind encouraging more girls and women, Priyanka says, "My father was not gender biased and he always said that girls must perform the difficult steps like boys. There is no disparity in art and all are equal. Another reason why people sent their kids was my sister and I. A lot of parents observed how two daughters were performing Yakshagana and sent their daughters to our class. I had observed that the ratio of boys to girls was 60:40." 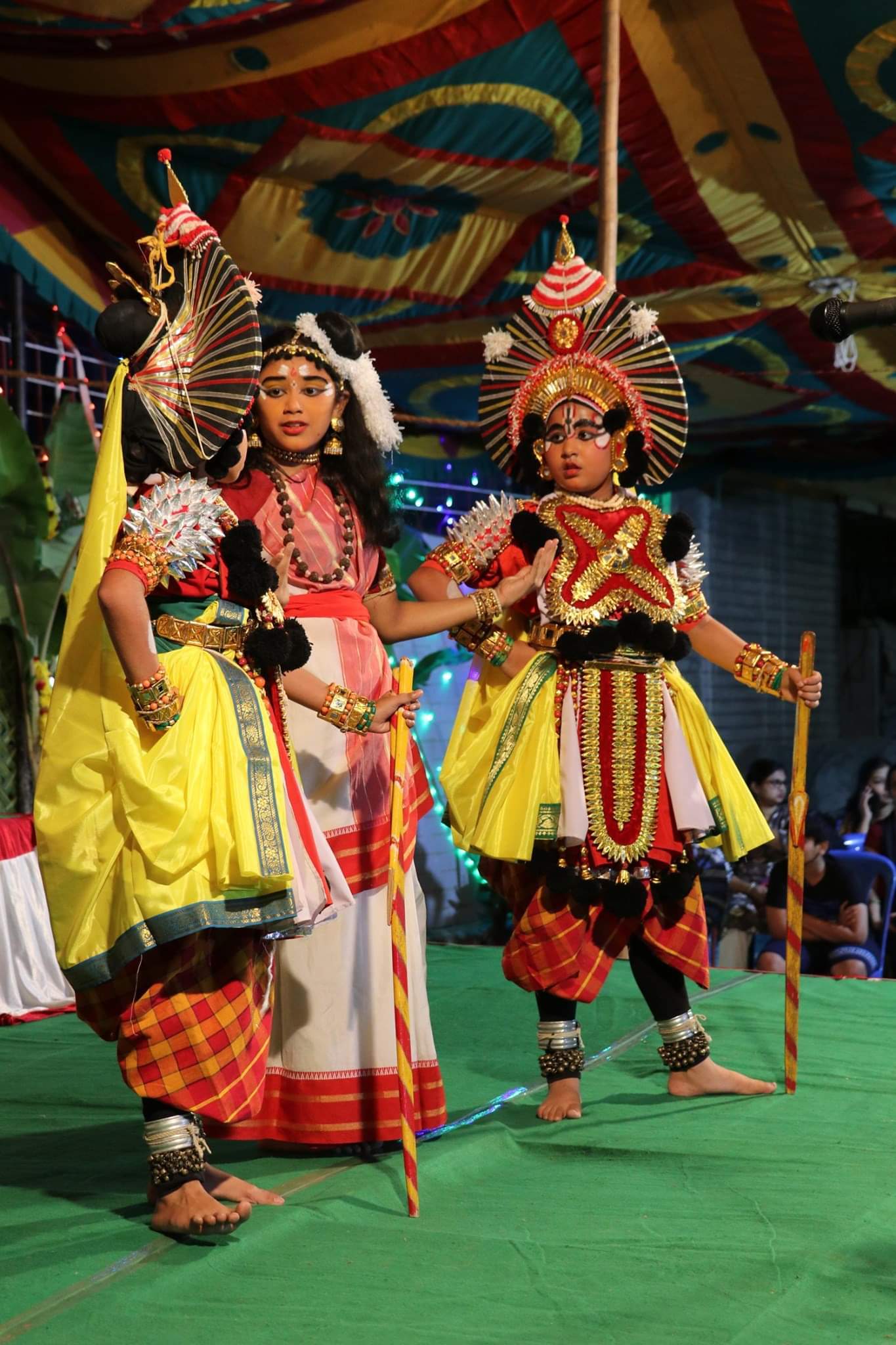 How they began teaching is a matter of trying circumstances, she continues to tell us, "I was 19 years old and was pursuing engineering. Suddenly, the dance classes shut down as the artists who were teaching at Yaksha Degula quit and started their own organisation. There were other artists whom we knew but they were not interested in teaching kids. The name of our institute had become famous to the extent that many people approached my father and asked him to reopen the classes. My father could not afford to resign from the bank and become a full-time artist. I decided to reopen the classes and started teaching students. Every evening, when I would come back from college, there would be classes for 2-3 hours that I would have to handle. During the weekends, the classes went on for much longer. Soon I had more than 100 students in my class and my interest in teaching also increased. At times, I would see my friends spending time on the campus and felt fleetingly that I must cancel the class and hang out with them. But my conscience did not allow me to do so. The classes would happen on weekends when I got a job and we have taught Yakshagana to more than 2,000 students so far."

Beyond the Yakshagana classes, Priyanka worked as a fellow for Teach for India, a non-profit organisation that educates underprivileged children. During the fellowship, Priyanka started integrating arts in education. "My first stint was teaching concepts to children using art and they loved it. After a while, I got into CSR activities for the same organisation. But the fellowship made me realise that art can be innovated and used in education to make learning easy for kids. A year ago, I quit my job and started my own organisation called Twarita in Bengaluru. Currently, I work for Yaksha Degula as well as Twarita." 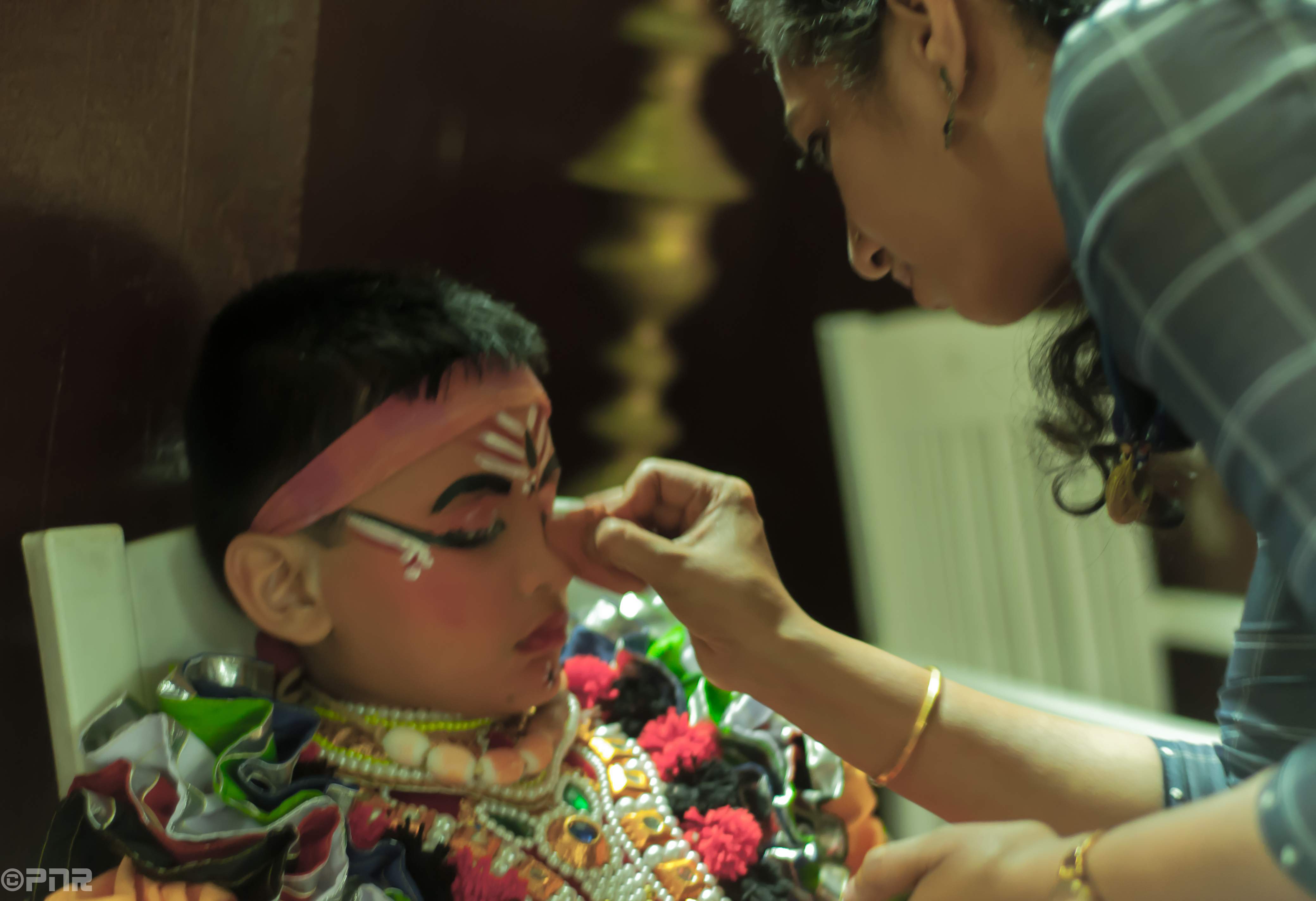 The highlight of Yakshagana is its costume and make-up

What they do at Twarita
Having grown up with the folk art community, Priyanka ended up having some serious conversations with them. One artist told her that he did not teach this art to his children because it might not help them earn a living or actually make it big in their lives. This conversation stuck in her mind and she decided to start Twarita to address that very gap. She explains, "When children are exposed to art at a young age, they practice it in the future and there can be no better example than me. Therefore, in Twarita, we don't look at Yakshagana alone. We consider all the folk art forms and teach it to children in schools. It not only creates awareness among kids but provides a platform for artists to earn their livelihood. Aside from this, I focus mostly on the innovation in folk art forms. For instance, we released a book called Yaksha through Bookosmia recently. We know that every child cannot become an artist but they can surely learn about this art form. We need not perform only religious stories through Yakshagana. We can also include non-religious stories like the Panchatantra so that children understand the importance of this art form."

Recently, Priyanka and her team at Twarita did a couple of  pilot projects that included Yakshagana and Dollu Kunitha, working predominantly with government and low-income schools. "The response that we received was amazing. I believe that only art can help groom yourself and enhance your listening, speaking and writing skills. After the workshops, we have seen more collaboration among children in the class and they gain more confidence. We also conduct a reflection session where we ask them if they enjoyed learning a difficult step for that particular day and explored their energy," explains Priyanka. Yakshagana being taught to children at one of the schools

With the lockdown extending for more than two months, Priyanka has been generating content to post it online for children. She makes videos of her performing and teaching new steps every day to children. She is hoping that the situation soon becomes normal. She says, "Online classes don't help us teach or focus on every child personally when they get the steps wrong. I hope that we resume face-to-face classes. But, I must admit, social media has earned audiences for me across the globe. Most of the kids abroad are also trying to get to know what the art form is about and this has given me immense happiness."

A timeline of events at Yaksha Degula

1998 - till date: Started felicitating artists with a cash award for their outstanding contribution to the field of Yakshagana

From 2010 till date: Yakshagana workshops in Government Schools across Karnataka