This nine-year-old boy's speedcubing skills are awesome. His timings are proof

Atharva Bhat's capabilities with a Rubik's cube is nothing short of spectacular. Check out his YouTube channel to learn some pretty neat tricks to help you solve the ever-pop

It is natural for children of this tech-driven generation to get addicted to electronic gadgets and video games but one way to reduce the chances of addiction is to give them different options to develop new and exciting skills. That’s what Atharva Bhat’s father Ravindra Bhat did when the boy was six years old. He bought a Rubik’s cube and encouraged his son to solve the puzzle. With a ton of practise and concentration, this not only led him away from a possible gaming addiction but also made him one of the champions in speedcubing. The fourth grader says, “I can solve as many cubes as you can give and that’s become my passion now. When my father bought a Rubic's cube for the first time, none of us at home knew how to solve it. I tried but I could not. Then, my father learnt it by himself and taught me, and I was able to solve two layers of the cube in no time. Before he could teach me the method to solve the third layer, I learnt the skill and did it myself. That’s how it began for the both of us.”

In 2017, Atharva participated in his first competition organised by the World Cube Association (WCA) in Bengaluru to solve a 2x2x2 and a 3x3x3 cube, and he won a prize too. “The prize motivated me to participate in more competitions in the future. There was no looking back for me. I attended as many competitions as I could during my summer vacations. I participated in 28 competitions organised by the World Cube Association and have solved 1,106 puzzles till date," he says. "I started training in solving cubes by using the right methods and different algorithms for various layers. Gradually, this improved my speed and timing. At first, I took 186 minutes to solve a 3x3x3 cube which has improved to 30 seconds,” adds Atharva who has also trained in solving the Rubik’s cube blindfolded. 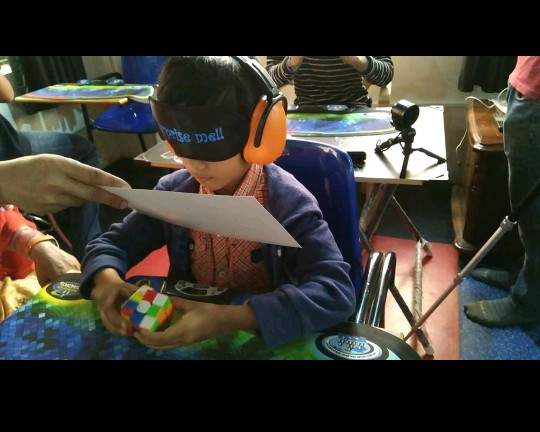 A year ago, Atharva started his own eponymous YouTube channel where he teaches viewers finger and hand tricks to solve a Rubik’s cube. But what led him to start the channel is an interesting story. Ravindra, who is proud of his son’s achievements, says, “An organisation from Karnataka organised an event called Karnataka Got Talent. After several auditions in different districts, Atharva showed his talent by solving a Rubik's cube and skating at the same time. Atharva also solved three Rubik's cubes at a time. While two cubes were in both his hands, the third was solved using his feet.” Now, that's truly something. The YouTube channel has various mosaic art pieces that Atharva made on the occasion of Republic Day and Independence Day using cubes.

When we ask about his future plans, Atharva laughs and says, “I have a list of plans when it comes to solving the Rubik's cube. My first plan is to learn multi-Rubik's cube solving while blindfolded. I want to improve my speed and timing in the 4x4x4 Rubik's cube solving category. I also plan to create some world records but I don't want to reveal anything now as I am working hard every day towards my goals.”