Two sides of the same coin; they are alike

They are on our stage. They hold the mic

They talk in smooth language; we don't feel hated

We clap, shout and we stand with them elated

Once they all finished talking, we give them a trophy

Meanwhile, one of us is raped and killed in atrocity.

Their shouts and slogans make all deaf in country

We remain the only speakers and audience of our agony.

Yogesh Maitreya grew up noticing that the microphone seldom reached the hands of those who should have spoken. He didn't see those voices in literature either. The voices were either muzzled, muffled or echoed by somebody who had no idea of its origin - the joy or the pain behind it. His 33 years of existence on this planet has been a journey towards finding those voices and his own in a cacophony-filled world of privilege, suppression, caste and identity.

Yogesh is a writer, poet, translator and publisher. 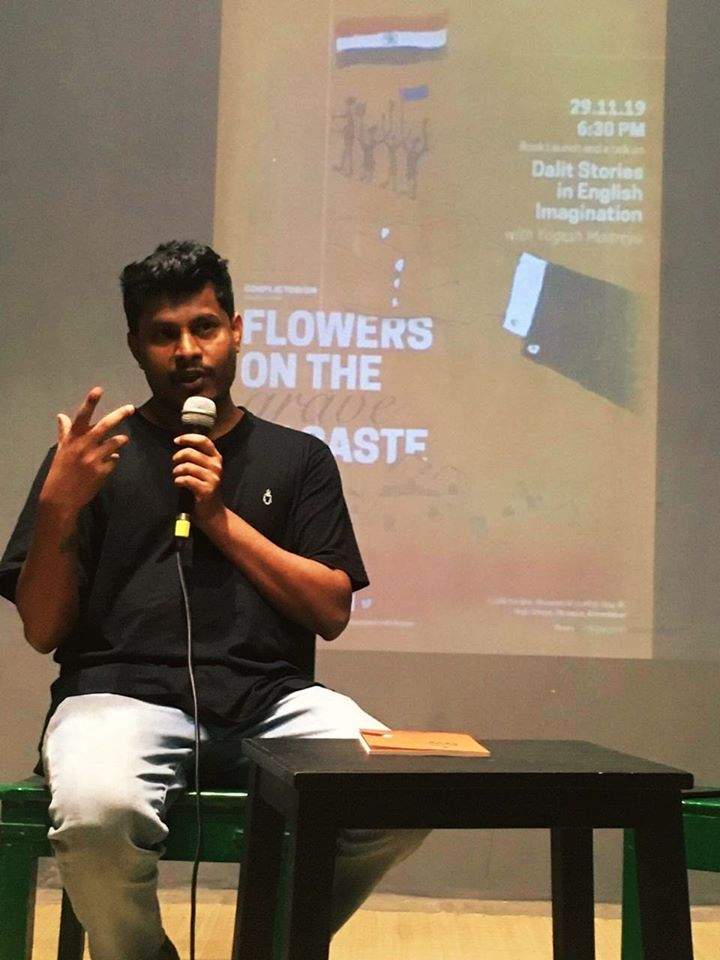 He was born in Nagpur and was surrounded by the words, work and vision of Dr BR Ambedkar very early on. His forefathers had converted to Buddhism to shun the oppressive caste system. "I grew up in a Dalit basti and lived there up till my graduation. My idea of India and literature were shaped during my formative years. Babasaheb was frequently discussed in our home," he tells me. Yogesh remembers reading only western writers in his English textbooks in school and even if there were a few Indian writers, they were all savarna. And the savarnas did not tell the stories Yogesh could necessarily relate to because they were not the stories of the people he knew. "My people did not figure in these stories. They were all written by dominant caste people," he said.

He started to write as early as he when he was in high school. And he wrote about what most children that age obsess about - love and romance. Since he was reading mostly western literature, he learnt to write along those lines. He emulated their style and their vocabulary - but never at the risk of the language. 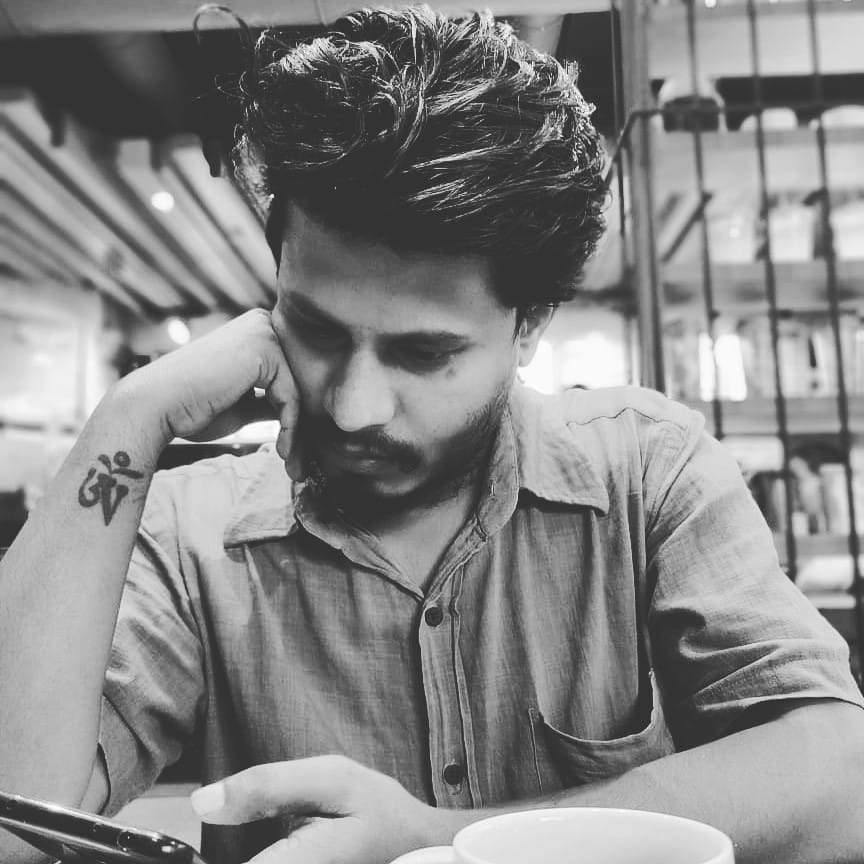 He wanted to write correctly and impeccably. He was good at it and then slowly he began to read more Dalit literature. He found a lot in regional literature but not much in English. "There was no Dalit imagination in the books," he says, "There were only stories by savarna writers and for savarna readers." Yogesh then moved to TISS to do his MA in Social Sciences and that's where his understanding of society grew. This is where Yogesh realised that more than writing it impeccably, it mattered what he wrote about. So that's when he switched from concentrating on language to focusing on the content of his poems and stories.

That's when he decided to be the one to tell the stories that were missing.

The stories of his people

After spending a few months working for a news portal, Yogesh decided to become a full-time writer. He dove into translation from Marathi to English - anything at all from Ambedkarite literature to the poetry of JV Pawar. He translated the first volume of Pawar's poetry but to his surprise, he found no publishers. Strangely enough, nobody was interested in publishing the translated works of a celebrated writer like Pawar. "Publishers feel there is no scope for Dalit literature. They only want to publish the work of dead Dalit writers, or people who are not alive to see the readership. They don't want to invest in young, contemporary work. If the writer is already established in one particular regional language, then they have interest in publishing their translated works. I also feel that when it comes to Dalit non-fiction, people only read it as entertainment and not as an educative piece," he believes. Yogesh has himself written a paper on upper castes translating Dalit literature and found that most works have been translated only by them. 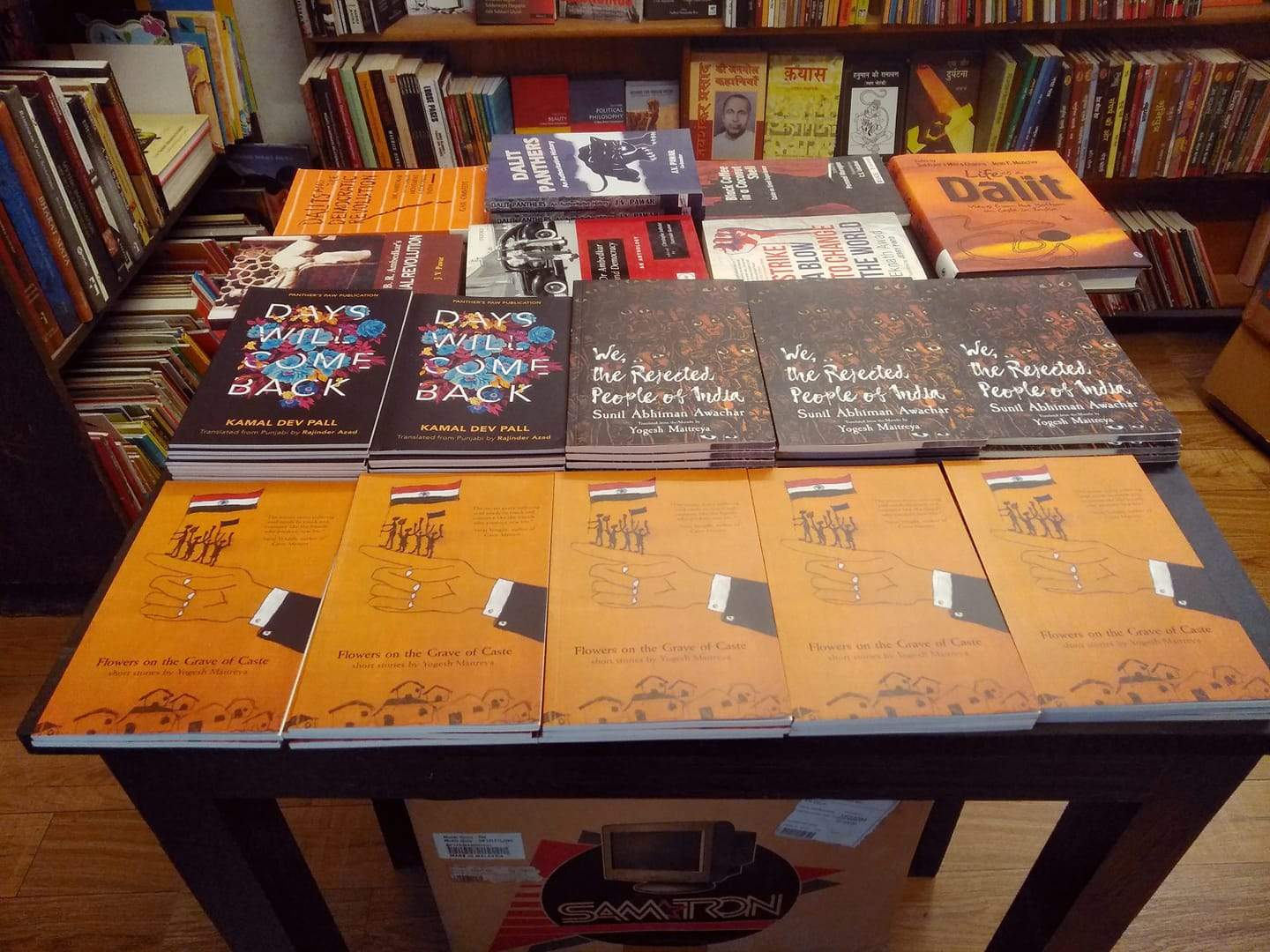 Going the self-help way to publishing

After struggling for a little while, Yogesh began to consider publishing it on his own. "I didn't have the money to publish it on my own, so I started to research publishing. I found out the different aspects of publishing and what went into creating a book. So it took me about 6-7 months to figure out the formalities, from how to get an ISBN number to how to make a book cover to which fonts made sense," he explained. By and by,  Yogesh learnt the art of creating and choosing the right book cover, he educated himself about layouts, fonts, quality of paper and colour, printing, the printing process. Everything. Finally, he managed to set up the publishing house. And he called it - Panther's Paw Publication. And how did he come up with the name? "When you think of the Dalit Panthers, you think of them as being very strong or aggressive in their approach. Also, nobody takes into account that at the forefront of a revolution are writers. And we've had great prolific writers who were at the forefront of our protests and so I decided to go with the name Panther's Paw. Also, I want us as an organisation to leave a footprint behind. So, that's why Panther's Paw Publication," Yogesh explained.

Yogesh is critical of mainstream publication houses because they are not interested in translated works, "Thousands of publishers across the world have been publishing translated books and poems from French, German and so many language authors, but in India, there is a hesitancy to publish regional work especially if it is about or by labouring castes. We have to change that. We have to develop the world of translated works," he added with a lot of verve.

So how does it feel to be among one of the few publishing houses that are bringing out literature that other houses aren't interested in? "Well, its a movement. Publishing is a movement. Every movement needs surviving. Writers are a part of this movement and we have to ensure that there is a space for the vision of Ambedkar in the literature of our country. There has to be a critical space as well. We need to publish the writing of those who are alive and end up seeing their work in print," he said. 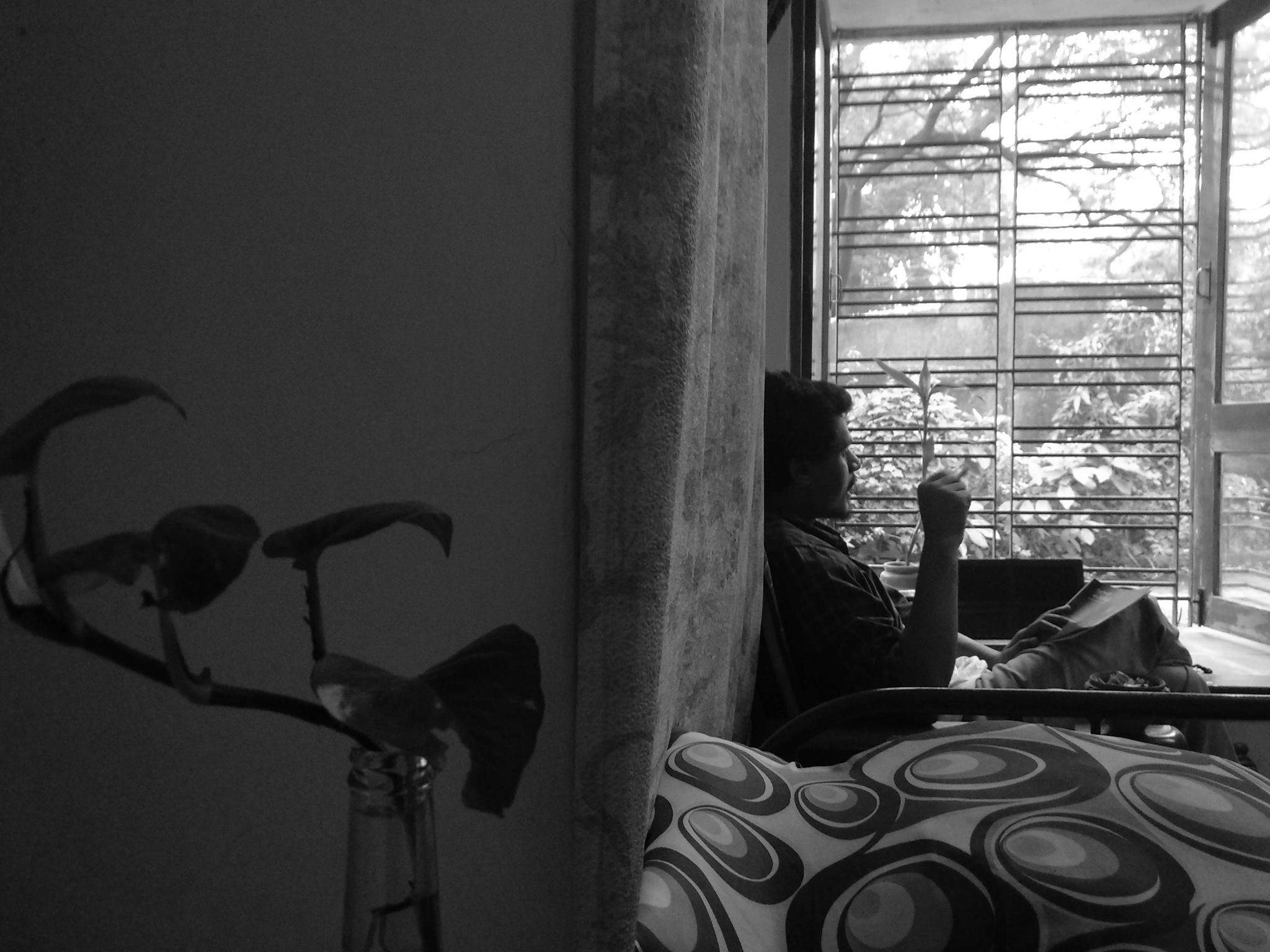 Getting his books to an audience that deserves them

Yogesh says that with social media, marketing has become easier - in the sense that it has made it easy to reach out to people. He describes it as 'exhilarating'. But why it is extra important for Yogesh, is that people reach out to him as well and offer help. Panther Paw is run by mostly freelancers, he told me. "People actually reach out to me and say they could help me with this or that. Different aspects of publishing like printing, designing, editing - they contribute in some way or the other because they believe we are doing good work. Many people also contribute financially and that keeps us going," he explained.

Obviously, though, Yogesh cannot completely rely on social media to market his books. He plans events across the country in order to meet people personally and market his books. "I give a lot of importance to these events because it really helps with selling the books," he adds.

Yogesh's latest book Flowers on the Grave of Caste has garnered a lot of praise for being one of the few, if not only, non-fiction short stories book in Dalit literature. "It has six short stories based on the life of a young Dalit boy and his perspectives of living in a big city and studying in elite institutions. How the whole world looks at him and how he differentiates between living in rural India and living in this new India," he explained. 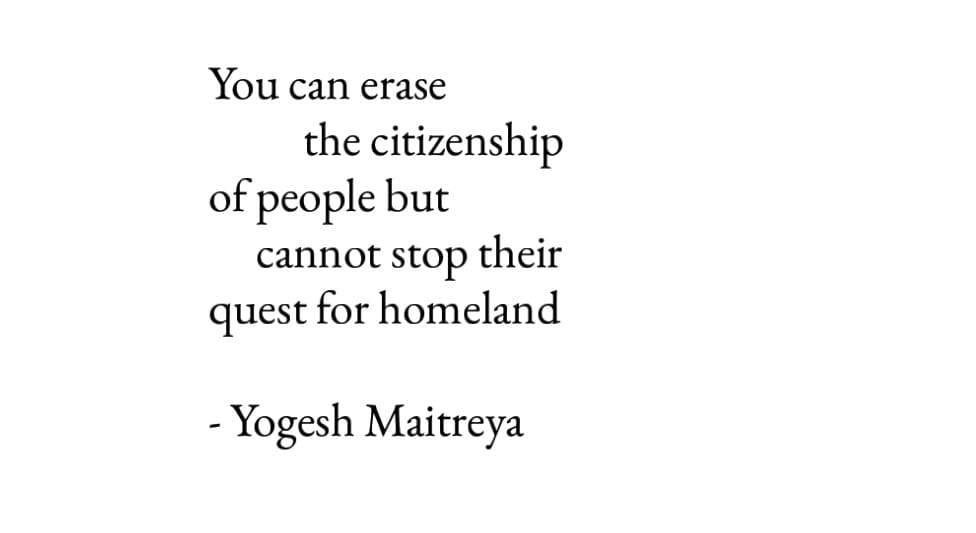 His words travel across cyberspace

Yogesh's poetry, though, is something that is widely shared on social media, often going viral. He writes about current events as well and writes almost every day. His latest was on the protests raging across the country, but he says the struggle is not new for the oppressed. "We have been asked to show documents since forever. Ambedkar also once said how he didn't have a homeland. Dalits, adivasis have not been ever considered citizens. Forget citizenship, we have been asked to prove that we are human beings in this country," he points out. "The struggle is inherent to us," the writer says.

Yogesh says the purpose of publishing houses like Panther Paw is to develop an anti-caste sensibility among people. "Literature is largely communication and we want to make sure it is honestly communicated. We don't care about the form but care about what we say. We are looking to effect change because caste is a disease and it is important for us to develop anti-caste sensibility. An idea can bring about change and we can do that by ensuring this literature gets published," he believes. Yogesh has other books lined up for publishing even as he continues to write articles for publications, writes stories and pens poems for his followers and the larger cause of humanity.

And that is the story of how Yogesh got hold of the microphone.