Diaries of Ultra Sarin: How this 10-year-old Bengalurean became a writer and illustrator

Ten-year-old Sarin is not your average schoolkid; he is a published author and illustrator who believes in chasing big dreams because...YOLO. Here we trace his journey from the beginning

Ask any fifth grader what they read in their free time and the ones who do would probably name books that are light and age-appropriate, like comics or Enid Blyton-type children's books. Would you buy it if a ten-year-old tells you that he reads The Economic Times and regularly follows their Tech-Talk blog where industry leaders share their views on technology and the future? Well, believe it or not, that is exactly what Sarin Patel, a fifth-grader at VIBGYOR High School, Bengaluru, does. And having a keen interest in reading 'big people magazines' is not all. At the tender age of ten, Sarin is already a published author and illustrator!

How did this brilliant young chap get pulled into the wonderful world of books? “My elder brother, Simon, has been a voracious reader ever since he was introduced to books by my parents at a young age. He has been encouraging me to read new books ever since I was a toddler. Both of us have a combined collection of almost 500 books. Apart from the stories, I am interested and intrigued by the style of writing and the lovely illustrations in books, especially book series like Barry Loser, Tom Gates, Diary of a Wimpy Kid, The Treehouse, Timmy Failure and Captain Underpants,” says Sarin, adding that his journey into illustrating began with doodles on everyday things that he observed around him, “Later, I decided to upgrade to line drawings and, with time, they started taking the shape of illustrations, where I tried to depict my thoughts and emotions through expressive art.” 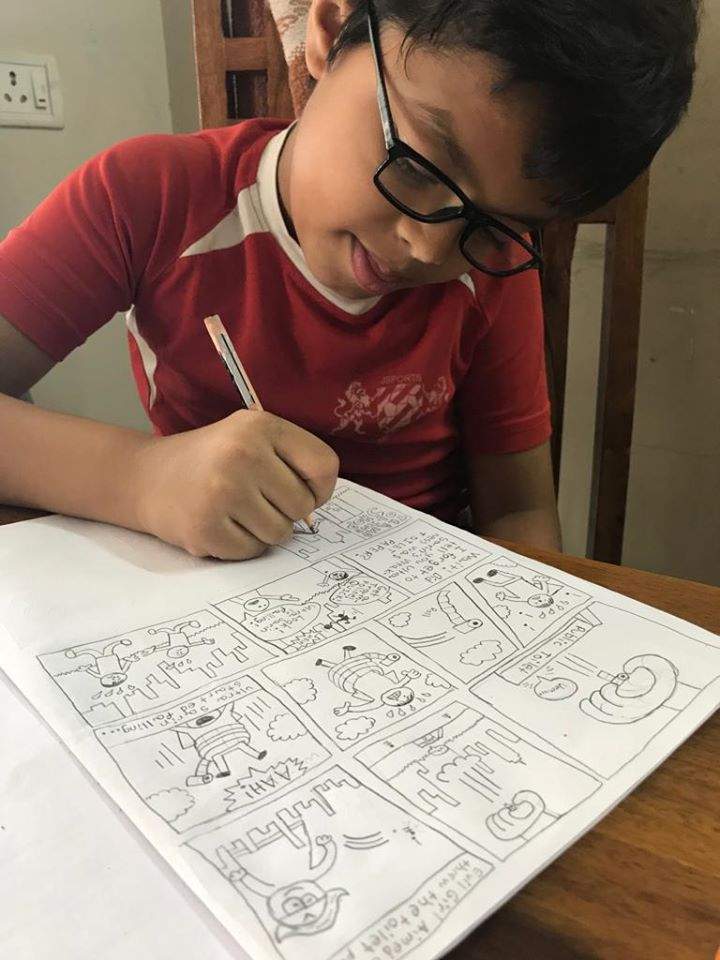 Gradually, Sarin even began experimenting with writing because he could not contain the exciting ideas he had inside his head anymore and he wanted to make use of all his talents. “I started writing short stories at first. Then, it was at the age of 9 that I decided that I wanted to write a book. And that's how my first book, Ultra Sarin: The Adventures of Ultra Sarin happened,” he smiles. Ultra Sarin, published on December 3, 2019, tells the story of a young kid who gets struck by lightning and gains superpowers. With these powers, he becomes the world's greatest superhero and defeats supervillains.

The book, which carries original illustrations by Sarin, has received rave reviews from adults and children alike. What does he attribute this success to? “My illustration style mostly contains lines. Usually, I develop an image in my mind and then begin with the illustration. Once the image has been formed in my mind, it doesn’t take much time for me to translate that on paper. When I write, I try to keep it simple. I do not use many difficult words,” he says, explaining his process.

Ask Sarin who has been his greatest source of inspiration and pat comes the reply, “My brother has been my greatest source of encouragement and inspiration. I usually discuss my ideas with him before I start writing. When I first expressed my interests, my family supported me in every possible way. I still remember the day my father bought a yellow notebook which I used to write my first book. Whenever I am unable to write or think, my father helps me clear my mind. My school and teachers too have helped me in my quest to be a writer,” the cheerful 10-year-old states. So, what does the future hold for Sarin? “I want to do more of writing and illustrating, obviously (laughs). I am already working on my next book to be titled Ultra Sarin and Pajama Man. I want to become an established author and YouTuber when I grow up,” he says proudly.