The organisation he co-founded, Magasool, procures technological solutions that help improve yield and reduce the use of pesticides and makes them available to farmers in 9 districts of Tamil Nadu

To make your mark in an area of your choice, is it important to start your career in that particular field? History tells us quite the opposite as famous people, from bestselling author John Grisham to Hollywood biggie Harrison Ford have all had multiple detours in their career path before ending up at the top of their game today. After getting a PhD in Astronomy and Astrophysics from The University of Michigan in 2008, Ajaykumar Tannirkulam, a Bengaluru-based researcher who grew up in Ranchi, had set his sights on starting a three-year Astrophysics fellowship in Nice, France when his life changed forever all because of a ‘break’ that he decided to take.

“Astrophysics is all I ever wanted to pursue in life, but before taking up the fellowship, I thought that taking a break and doing something different would be a refreshing change. I applied to a lot of fellowships in India and got the first call from IFMR (Institute of Financial Management and Research) based in Chennai regarding a research position,” informs Ajay, who completed his BTech from IIT Bombay in 2002.

He took up the IFMR offer promptly and in 2009, got involved in a rural banking study at Thanjavur which examined the lives of 8,000 rural inhabitants, trying to understand their economic conditions, what crops they produce and how they manage their money. “This is how I started interacting with farmers and got interested in agriculture. After a year, I wanted to keep going at it for another year and see, but the folks who were offering me the Nice fellowship said that I would lose the opportunity if I didn’t join them that year itself, so I deliberated and decided to let it go. It was quite shocking for me that agriculture had impressed me so much that I chose it over Astrophysics,” Ajay reminisces.

A basic interest in the subject grew into an obsession of sorts – where he would regularly read up on different agricultural practices and methods – and in 2011, along with a fellow Agriculture enthusiast and researcher, Jayaram Venkatesan, did a pilot study on giving farmers access to certain technological tools. “After the success of the study, in 2013, we registered an organisation called Magasool (meaning yield in Tamil). Though our registered address is in Chennai, we work in villages in all nine districts of Tamil Nadu,” says Ajay. The bulk of the work that Magasool does revolves around finding available technological solutions, either from other farmers or other companies, implementing on a small test patch and then presenting them to small farmers in the nine districts of Thanjavur, Tiruvallur, Trichy, Tiruvannamalai, Thoothukudi, Kanya, Tirunel, and Theni so that they can increase their crop production significantly. “We work in both dryland and wetland areas. The organisation's goal is to simplify agriculture and make it as viable as possible. We target small, marginal farmers who work on less than three acres of land,” Ajay points out.

Additionally, Magasool also aims to reduce the drudgery of farmworkers by eliminating some pressing problems. “Paddy is very labour intensive. It takes around 14-15 farmworkers to transplant one acre of paddy in a day. Most of the people who do the transplanting work are women. It is backbreaking and takes a toll on their bodies. Also, if you see, the areas we started with are short on labourers - small farmers find it difficult to find workers as the latter prefer to work for big farmers and landowners,” says Ajay, adding, “We provide the farmers with Japanese and Korean machinery to do the transplantation. It does many things, including ensuring that the spacing between paddy crops is proper and systematic so that crops access better nutrition and better sunlight so that the yield is high.” 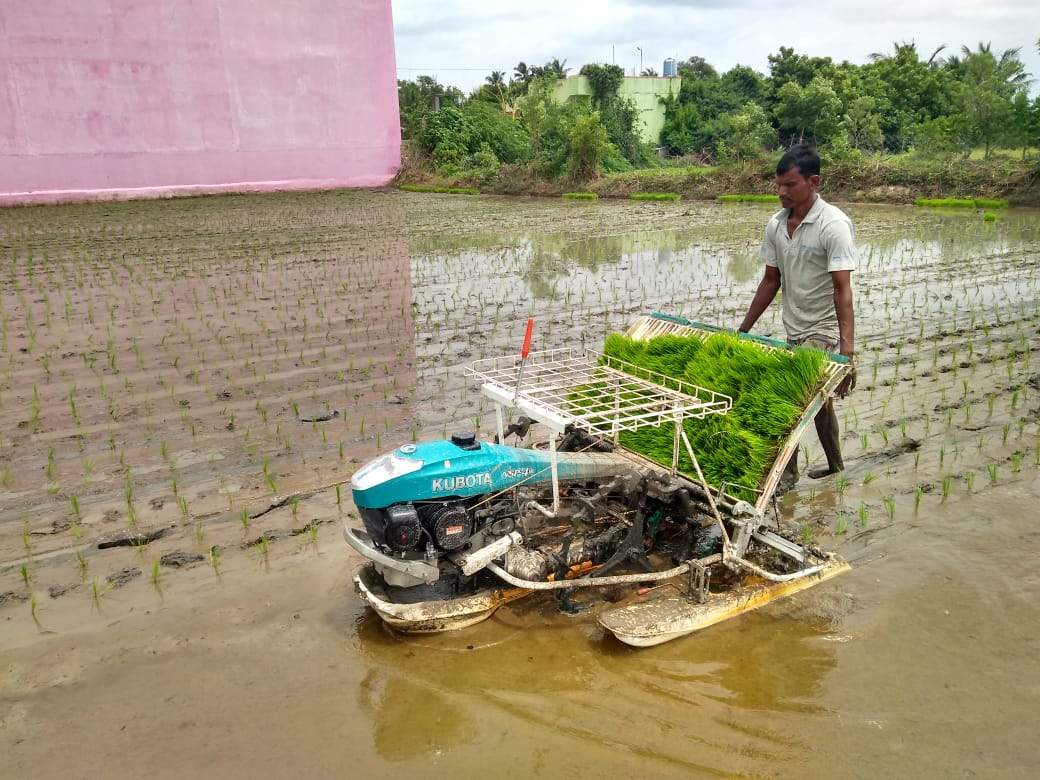 Small farmers have been able to increase their yield and profits, thanks to Magasool's efforts

In the case of dryland farming areas, Magasool’s main focus is to improve the farmers’ access to better quality seeds and reduce the usage of pesticides through integrated pest management. “Integrated pest management involves bringing in mechanical or pheromone traps to get rid of pests. We want to reduce the dependence on harmful pesticides that may cause many health problems,” explains Ajay.

Through this method, Magasool ensures that farmers are able to increase their profits by 10% - 30%. Instead of 14-15 people being involved in the transplantation for many days, two workers - 1 agriculture worker who has been upskilled to become a machine operator and one more helper - are able to complete it in half a day.  “In addition to simplifying lives for the farmers, the trained operator also increases their earnings by a factor of three.  This happens in the wet areas of Tamil Nadu - the Kaveri delta, Kanyakumari and some parts of Tirunelveli,” he informs.

Ajay and team are constantly trying to come up with practical plans to make farmers’ lives easier. “We hope to set up a community radio that is very localised, and will give information on what are the different schemes and subsidies available to farmers of that particular village, and also solve region-specific problems,” he smiles.