Saranya Kumari K had a sleepless night on the eve of her birthday. She was not anxious about the person who would wish her first nor the surprises she would receive on that day. It was something much more special. Her birthday, fortunately, coincided with the day the results of the local body election was announced, after all she was contending for the post of a ward member. Well, it turned out to be a good birthday, because she won!

The newly elected ward member of Aathu Pollachi panchayat which comes under the Anaimalai Union in Coimbatore district says that being differently-abled has never stopped her from dreaming. "At the age of three, I had a viral fever which affected my nerves which in turn made both left me unable to use my legs. Initially, I couldn't walk without support. But after constant exercise, I can now manage independently, but I cannot walk like a normal person," she informs.

Being an independent candidate, Saranya was continuously supported by her family friend, K Saravana Kumar. "He asked me if I was interested in contesting the election. Though I used to shy away from competitions during my school and college, I wanted to take part in this, because I have been witnessing the difficulties that are faced by the people of my area," tells the 22-year-old. 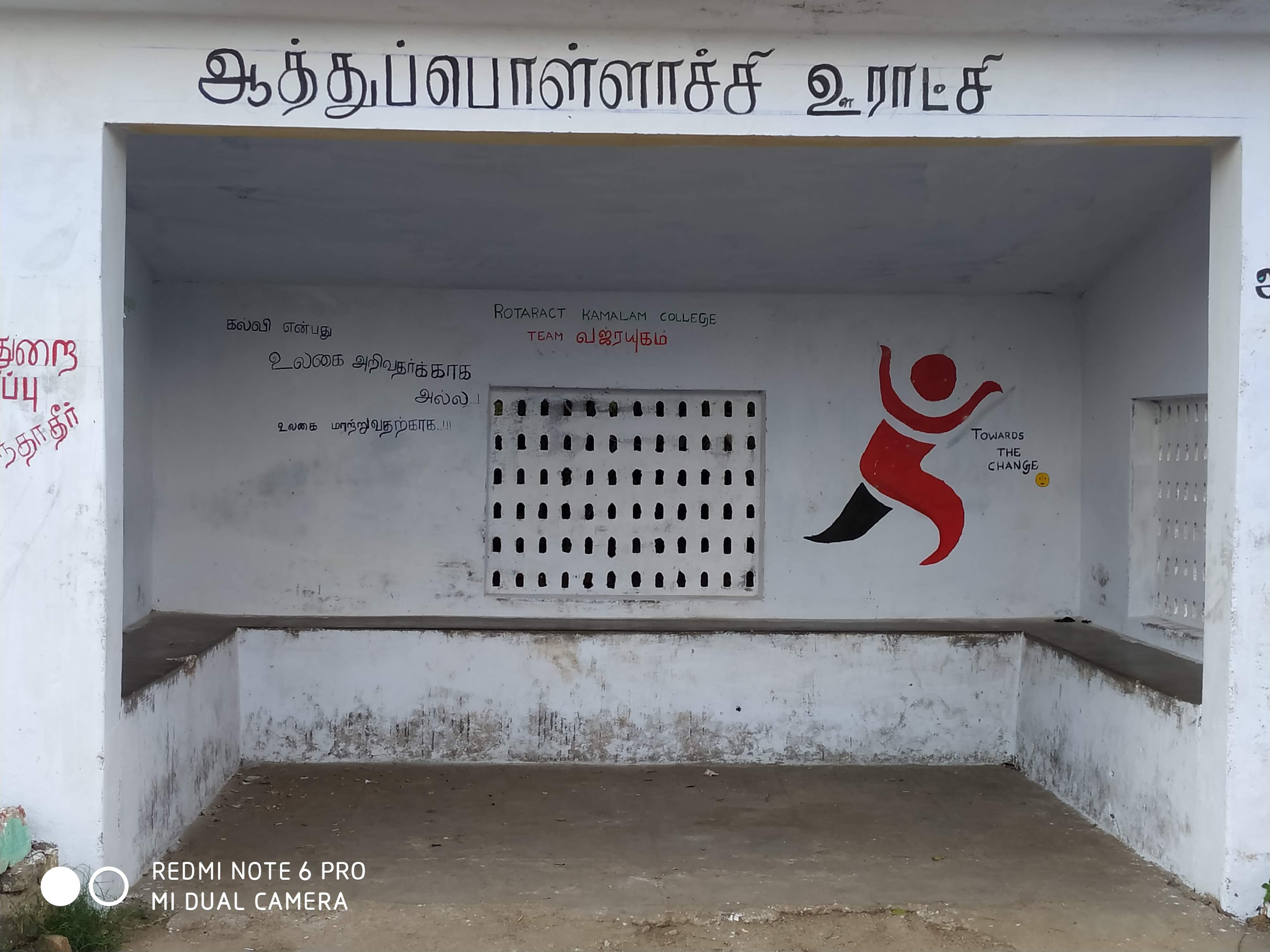 The bus stop renovated by Saranya Kumari K and her team

K Saravana Kumar, who had also contested from a different ward in the same election lost to a few votes but was confident that Saranya would definitely win the election in her ward. He shares, "She is one of the few educated youngsters in our area. I have known her for the past five years or more and have seen her actively taking part in social services. Hence I knew that she was the ideal candidate to contest for the seat." Saranya, with the help of Rotaract club volunteers of Kamalam College of Arts and Science, renovated a bus stop which was earlier misused by drunkards. "We cleaned the place and also painted it. We added a few paintings representing the consequences of alcohol consumption," says the first-year MA Tamil Literature student of Government Arts College, Udumalpet. Apart from the above, she has also taught government school students for free and frequents the Collector's grievance meetings to represent her area.

Canvassing for seven days was a herculean task as she had to walk for hours together. "I had to undergo a lot of pain as it was not that easy to walk continuously with the disability. But I had to do it because it is an opportunity to prove my potential," she avers. "When I went to each house canvassing for votes, most of them told me that their vote was meant for me even if I visit them or not. They even scolded me for straining my legs," she smiles. 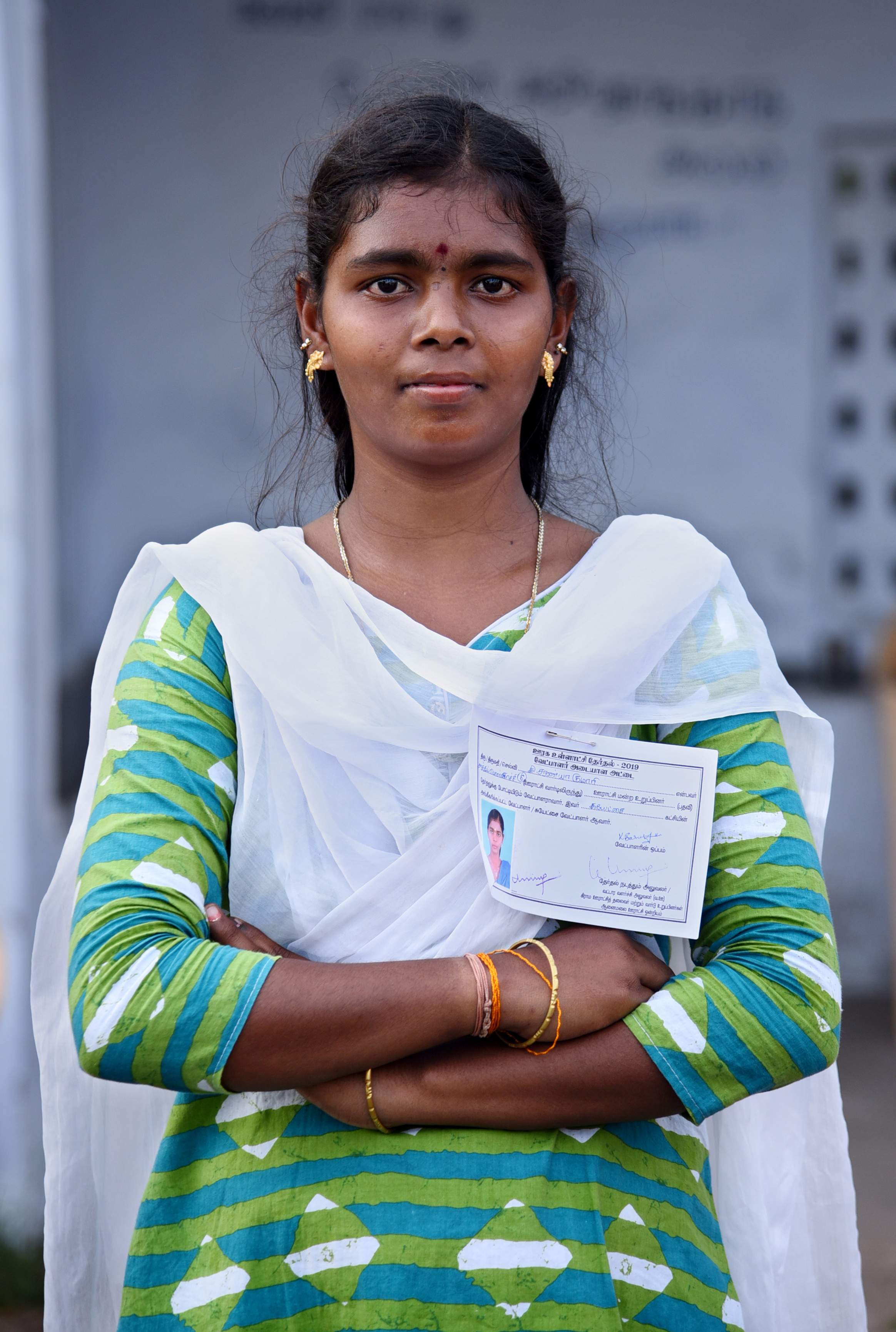 The people in her ward gave so much support that no other independent candidate contested against her. "Many of the voters came to me after the election and informed me that they have voted for me. This made us confident that we would win it," says Saranya.

Though it was a moment of pride to her people, Saranya believes that this victory is a personal success too. "My parents were separated for the past four years. But when they came to know that I was contesting for the election and that their support was essential, they united. So this election is a personal reunion of our family as well," said Saranya as her eyes welled with tears. Saranya's parents are daily-wage earners and helped her with everything she needed the last few days. Saranya Kumari was confident that her people would support her (Pic: A Raja Chidambaram)

Saranya's brother, K Thamaraiselvan, informs us that Saranya won with a margin of 37 votes. "Usually, our ward results came out first. But this time, our result was announced last. The anxiety we went through is indescribable" he said.

Discussing her goals as a ward member, Saranya says, "Forty houses in a region of my ward do not have a drinking water supply. Also, the public toilets are not well maintained, most of the streetlights are non-functional and the place right in front of my house filled with sewage is a home for breeding mosquitoes. I will be addressing these issues one after the other."

According to Saranya, who wishes to become a Tamil teacher in the near future, says that education is equally important as politics. "A good politician must definitely keep the promises they made while canvassing. I personally feel that youngsters are more keen on social service and keep up promises," she signs off.