Meet Hadiya Hakeem, the freestyling footballer from Kozhikode who dons a hijab

At 17, Hadiya Hakeem has managed to create a space for herself in the field of football at Chennamangallur Higher Secondary School

Hadiya Hakeem's eyes follow the ball with such intensity that you forget all the frills with which her story has gone viral. Yes, she wears her salwar kameez with an ease most people cannot find in a jersey. Her hijab is the first thing in the air as she sprints towards the incoming football. And while the onlookers wonder how a 'girl like her' has made her way into a football match, she has already scored the first goal for her team. The twelfth standard student moved to Kozhikode from Qatar just two years ago. Having cheered and rooted for her favourite football teams on countless match nights with her parents and brother, Hadiya had been playing football for her school team since she was just 12 years old. When her family moved to the small village of Chennamangallur in Kozhikode's Mukkam, she was devastated to find that her new school did not even have a girls' football team. Not one to quit anything without giving it her all, Hadiya set up an Instagram page, Hijabi Freestyler, to continue exploring her love for the game.

Chennamangallur Higher Secondary School, however, has always celebrated football. Each year, the school conducts a Soccer Fest to pit the school's best teams against each other in a celebration of sportsman spirit. It was a few senior students from the school's Commerce department who had seen Hadiya's Instagram matches and insisted that she participate in 2019's Soccer Fest. "I was waiting for my moment. I found so much confidence when I saw how strongly my family, friends and teachers were rooting for me during Soccer Fest. I never got a single negative remark or comment," says Hadiya.

"People always ask me the question, 'Was your family okay with this?'. My family is the reason I do this! In fact, I learnt the game by playing it with my brother. He's the most merciless opponent I know!," continues Hadiya, adding, "There's not a single player who looks like me in either the Kerala team or the national team. It's extremely rare to find a woman wearing a hijab playing any major sport. I want to bring this change personally." Hadiya points out that everything could change if there were more opportunities for girls like her who like to play ball. 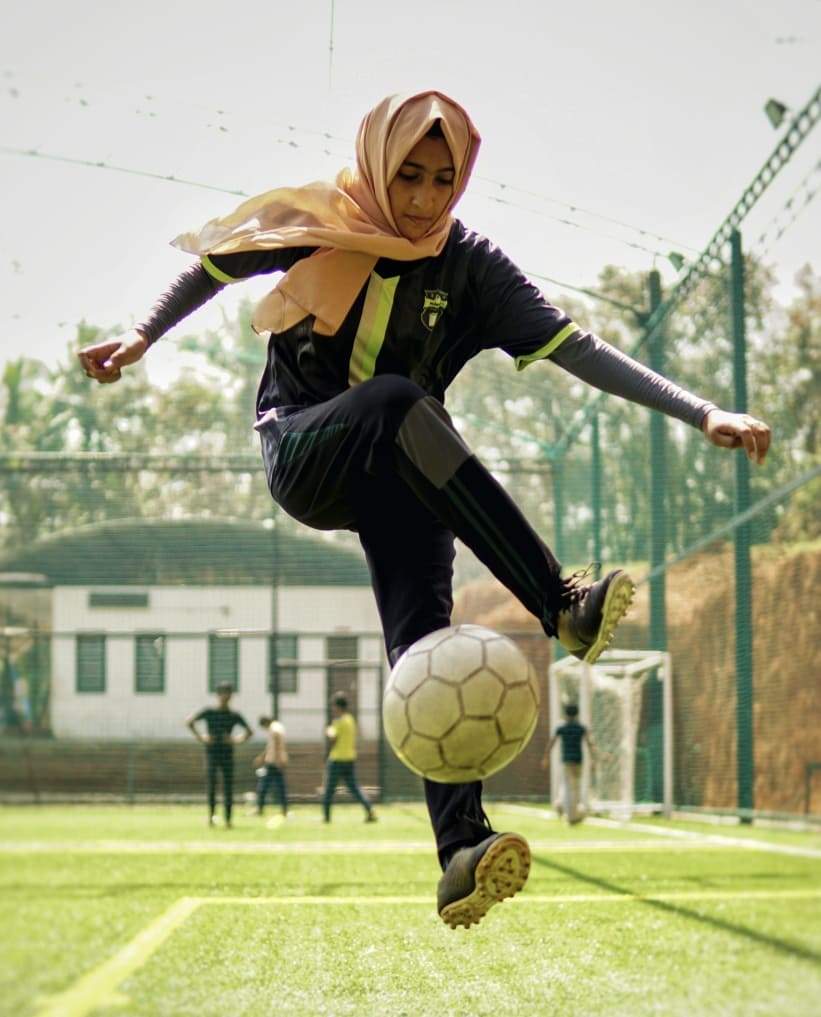 BALL GAMES: Hadiya posts about her game through Instagram

When she first moved to Kozhikode, the first thing she understood was that she'd need to fight to keep her love for football alive. She says, "It's not that Kerala doesn't love football. We have football academies for boys as young as 3 or 4. Almost every school has its own football team with boys who are self-proclaimed football fanatics. Why don't we have such provisions for girl students?" Where Hadiya lives, there are no football clubs she can practise in even if she tried to find time outside of school. And with her busy school schedule, she hasn't been able to join a coaching centre far away either.

She points out, "First of all, how are girls even supposed to discover if they're good at something if there are no opportunity for them to enter the field. Creating spaces where they can explore such hobbies must start from the grassroot level itself. In fact, it must start from our schools. Girls must be trained and taught about football with as much importance as it is given for boys. That could change the whole picture. There should be girls' teams that are coached to compete at the state level. And this must happen at the most local levels because all girls deserve to play!"

Now in her twelfth year of school, Hadiya is gearing up to join college. She is determined to find a university where she can pursue her love for football. She says, "That's my main preference. I want to keep playing. I want to be a professional player and join the national team one day. I know I'm only at a beginner level and will need to train really hard, but I'm ready to do that."