As soon as he began his journey into fashion, Saran Kohli was adamant that it would be an ode to his British-Indian heritage. The London-based menswear fashion designer who also wears the hats of entrepreneur, consultant and choreographer established his self-titled label in 2016. Having dealt with the skin pigmentation condition called Vitiligo since his teenage years, he has always aimed to  down the stigma around it in society. So when 2020 added personal protective equipment into the fashion industry, Saran decided to make masks for those who had such conditions.

"I wanted to use my expertise and platform to design and create something that will represent Vitiligo in a visual form," says Saran. "I needed the creation to work as an ice-breaker in conversations whilst using fashion as a form of expression. As face masks are the need of the hour for everyone during this pandemic, my illustrator friend Mira Abad and I decided to design a print that shows Vitiligo on all skin tones." The masks were launched on June 25, World Vitiligo Day. Approximately £2 of every purchase through sarankohli.com is being donated to the Vitiligo Society to help them raise awareness about it globally. 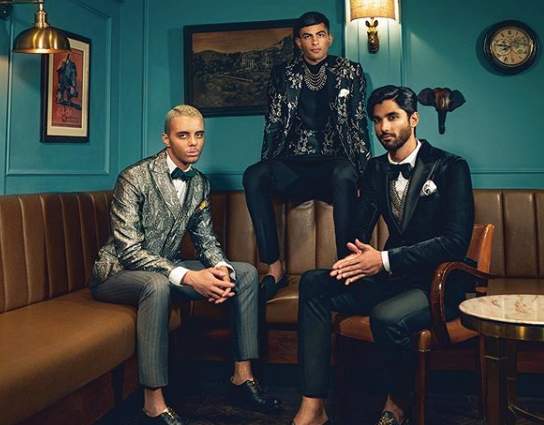 FASHION FORWARD: Saran pursued his BA in Fashion Management from the London College of Fashion

Following the debut, people from around the world with Vitiligo and those who were curious about what the masks represented drowned Saran with positive messages and shared it across social media platforms. Other designers and associates from the industry have also been inspired to capture such sentiments through fashion. He says, "I know from the many messages I have received that these face masks have given people with Vitiligo the opportunity to be represented in a different manner, have conversations openly and further educate people about their condition and also help others understand what it feels like to look different, which in turn will break down many stigmas and barriers."

Saran pursued his BA in Fashion Management from the London College of Fashion. From 2009, he has created couture pieces for international artists within the dance and music industries. As an occasional performer himself, he made his way into the creative network from a young age. He was also greatly inspired by his mother, who was a womenswear designer herself and the owner of a boutique. In fact, it was when he organised a fashion show for her label that he decided to dive into it himself. His focus has always been in design principles of traditional tailoring and craftsmanship, creating collections 'for the man of today but with traditional methods and high quality fabrics'.

Saran opines, "During unprecedented times like this, I believe the drive will come from creatives themselves to find different means and methods to express themselves. Not only to create fashionable apparel, but pieces for a purpose, with meaning, to spark discussions and conversations on topics that need more attention within our society and to look at our environment more sustainably." In the coming months, the label hopes to expand the Vitiligo visual representation range beyond face masks. New pieces will be available at the end of August for purchase on their website.