Radio Gaga: How this Bengaluru ham radio enthusiast has connected with people in 140 countries without social media

Madhu Prasad, an amateur radio operator speaks about connecting with several people in different parts of the globe and his amazing radio collection, including one that was used during World War II

Decades ago, when war and calamity was not a thing of the past, ham radios were the only mode of communication. While for some, these radios might be just a device to help communicate when disaster strikes, for people like Madhu Prasad, it is a hobby. And it all began with his love for radios and his interest to connect with people across the globe. He says, "I begin my day tuning into the radio and it is a thrill to connect with people where even mobile phones can't reach or exist." Madhu who works as a Public Affairs and CSR National Manager West Cluster at Hindustan Coca-Cola Beverages has been lucky enough to connect with a bunch of interesting people, including a solo sea traveller, Soviet astronauts in space stations and even the King of Thailand. He has communicated with people from over 140 countries and believes that it's totally different from connecting with people through social media.

We speak to him to understand what intrigued him to become an amateur radio operator. Excerpts:

Tell us how and when you saw this device for the first time and what intrigued you about it?
I came across this device when I visited Visvesvaraya Industrial & Technological Museum (VITM) and was 14 years old. There is a science club that conducts various activities for children and I was also part of it. Every year, the organisers of this science club organised a summer camp and I would have enough time to spend in the VITM premises, understanding the concepts of Science. One day, I discovered this Amateur Ham Club that existed on the topmost floor of VITM. Back then, this club was run by a famous radio operator, R J Marcus, who worked in the Indian Air Force. When I entered the room, I saw these beautiful and amazing devices that were generating different sounds. R J Marcus was connecting and speaking to several others from another land. I asked Marcus if I could enter the room and he said, 'Enter only if you are serious'. I did not think twice and entered the room. From then, there has been no looking back and at the age of 18, I secured a license to operate a wireless radio and connect to people in various parts of the world. And I have been an amateur radio operator for more than two decades now.

The reason behind calling ourselves amateur radio operators is because it is not the regular conversation that you hear on television and All India Radio. This is purely scientific experimentation, a hobby and I call it the first form of social media to connect with people. There are operators like us in every city and country. 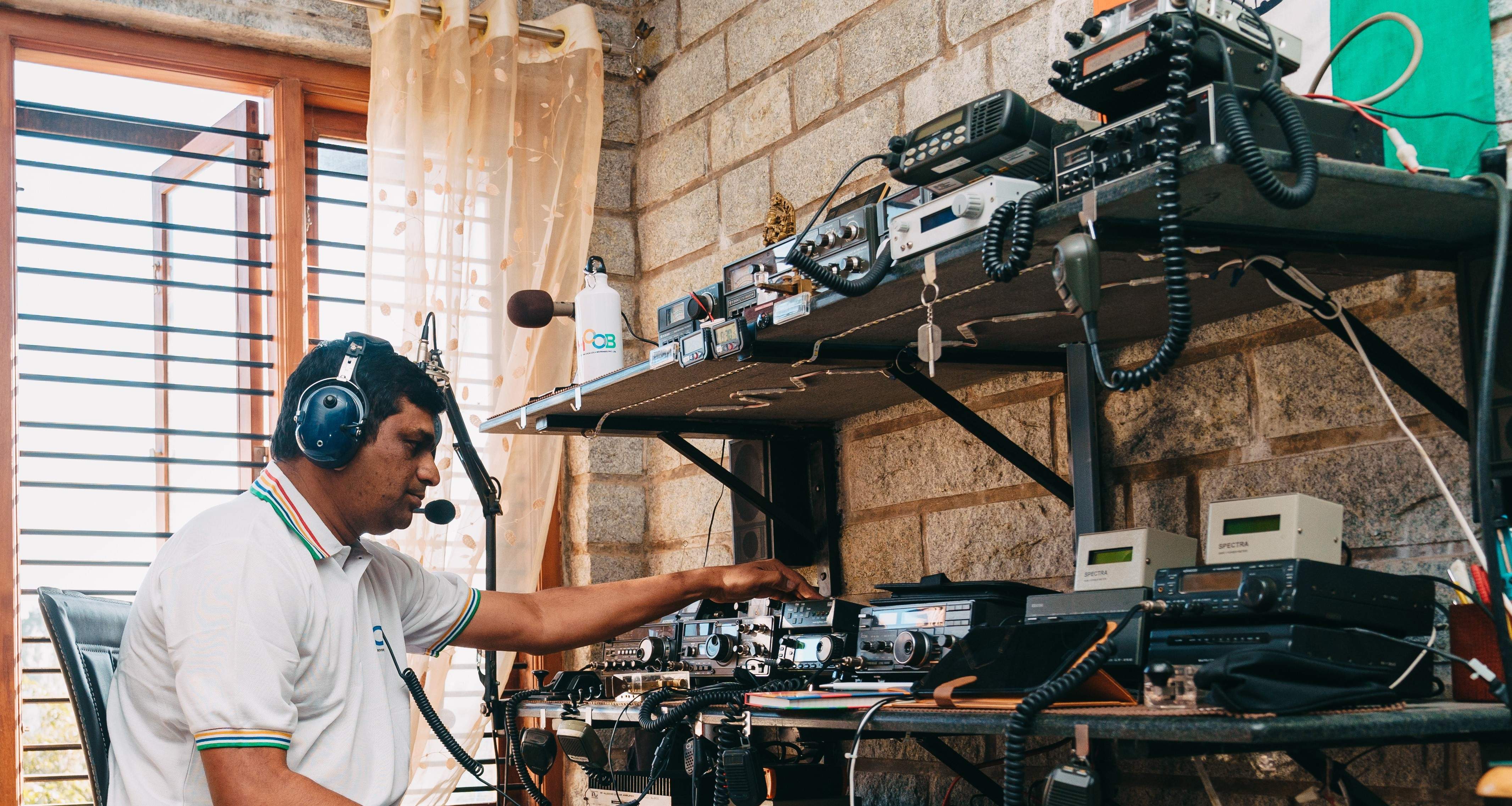 What language do you speak when you connect over the wireless radio with people from other countries?
There is a language called phonetics though we can communicate in regular language too. There are different kinds of communication that we use and Morse code is one of them. It is an efficient and quick way to communicate with people even if there are no proper signals. The reason behind using phonetics is because my way of pronouncing words might be different from how a Japanese or a Russian would pronounce. Hence, phonetics is a kind of code or a language that makes it easy to communicate with people. This language is universal across the globe. There are also certain codes called Q codes because some people might not know English completely. In such circumstances, we use Q codes and these are universal again. Some of the people working in the military also use this language.

In order to get a license and become an amateur radio operator, one has to write the exams conducted by the Wireless Planning Commission (WPC). What exactly one must know to write these exams?
One must have completed 12 years of age, be a resident of India and have the right intentions. One must also have a basic knowledge of electronics. There are two parts for these exams - basic electronics and laws governing the wireless. Earlier, there were three parts that included the morse code examination which means one must send and receive signals. One must be able to listen, decode, write down the message and also transmit it. Now, the morse code exam is no longer a mandate but if you know it, then, you are an advanced operator. 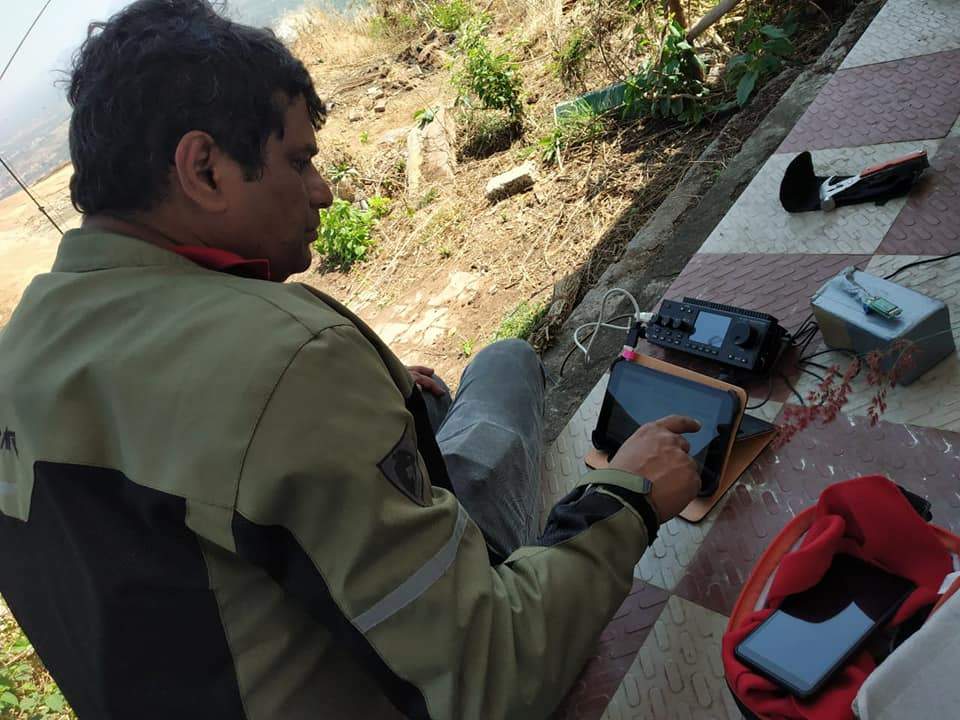 Usually, ham or radio operators are of great help during wars and natural calamities. Have you been were part of rescuing or helping people during such situations?
I have been part of the Bhuj and Latur earthquakes in 1993. Basically, the protocol is the district administration sends us a message to help them establish communication with people. The wireless device that we have can be used as we carry our own batteries or generate energy with the help of solar panels. Wherever needed, we carry our generators and we are able to establish that line of contact with them. There are our own associations of Amateur Radio Operators. For example, Bengaluru has a group called Bangalore Amateur Radio Operators and this data is with the district administration. Whenever disasters take place, the district administration calls us and we see that a group of radio operators go to these places to help people in need. Currently, the COVID war room in Karnataka also has radio operators to get daily updates on the number of cases from various districts.

Your collection of radios includes one used by Germans during World War II. How did you get your hands on this one?
I have the World War II valve radio and it's amazing how the technology migrated from then. I have radios that revolutionised wireless communication. Currently, I am at the 18th phase of this wireless technology. All these radios are in working condition. One has to look for these radios around the world. Unfortunately, India doesn't have manufacturers of these wireless devices except for Bharat Electronics Limited. The BEL manufactures these devices for the military and they don't give it to everybody. I am fortunate enough to have BEL manufactured systems with me which is a manpack used by the military frontiers.

Science and technology have become limited to computers, mobile phones and modern technology. Do students still take an interest to learn how to operate ham radios?
Unfortunately, the VITM closed its Amateur Radio Club a long time ago but a new institute called Indian Institute of Ham exists and R J Marcus still trains young minds to become amateur radio operators. Of course, a good number of people come now and classes are conducted every weekend. Due to the COVID crisis, these classes have nw gone online.