Gone are the days when children were mere listeners of the various shows presented by adults on the radio. The tables have turned and nowadays, children themselves are capable of recording and streaming their own talk shows on the community radio channel. At least that’s what children from Durgadahalli village in Tumakuru district are doing. They have been running a radio show called Namma Halli under which is run on the Namma School Radio station for a few months now.

Girish Kumar, who has worked before in the media industry, has been rolling out this programme by visiting different schools and villages. He says, "I want children in government schools, especially the ones in rural areas, to become content creators rather than just content consumers. This radio programme has played a key role in helping school children develop their own content. Currently, I am involving children from classes VII to IX. By being a part of this community radio channel, children have learnt to communicate and overcome their own shy nature. They not only become confident speakers, but they also turn into listeners and information seekers."

They don't forget homework
It's no secret that on weekdays, children are busy with their studies and homework. So when do they get time to record? To answer this question, Girish designated an old, tiny stone building where the children involved could finish their homework and record the show. He set up a WiFi connection, computer, headphones and other devices required to record. He says, "Every evening, children gather in this building and complete their homework and then record shows for an hour or so. We decide the content and which student will be recording it well in advance. Usually, the topics they speak on are selected in such a way that they are related to chapters in their textbooks. They speak about farmers, rains, sand mining in lakes and rivers and the new policies of the state and central government that are launched in the interest of rural folk, especially children and senior citizens." 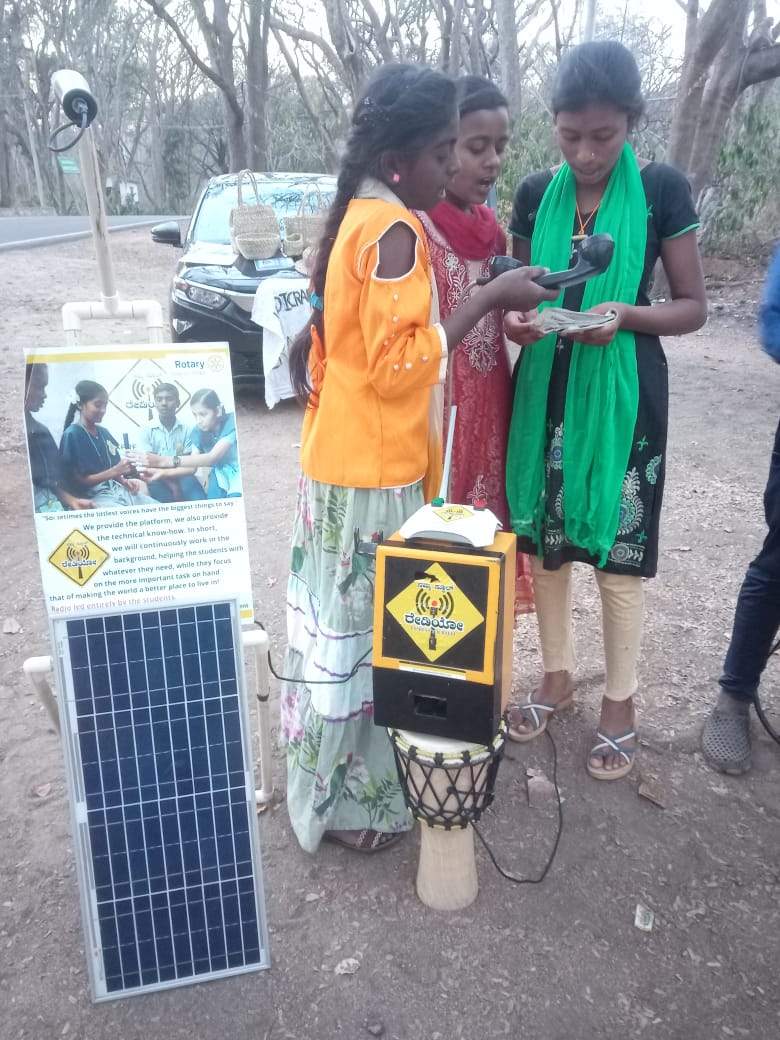 Hello there: Children train villagers to listen to the radio shows through telephones installed in villages (Pics: Girish Kumar)

Not just recording, two children are appointed for field reporting too. But this reporting happens only during the meetings called by the Gram Panchayat. "Sometimes, old and illiterate people find it difficult to understand the announcements made during these meetings. In such cases, children listen to the conversations that happen during the meeting, simplify it and explain it to the villagers. This helps in creating awareness and educating people about their rights and policies," says Girish, who feels that the outcome of giving information to people is being achieved systematically.

Apart from these talks on social issues and entertainment, students, in groups, are assigned a project every week. The projects often require them to find out about old traditions and practices of the village. Recently, a group of girls were assigned a project with regards to which, they had to understand the benefits of homemade medicines or herbal medicines. Girish says, "There is a traditional doctor in every village who prepares medicines from herbs that are available in everyone’s home or in their backyard. These medicines cure many diseases and have no side effects. The project is all about interviewing such doctors to know more about diseases and the medicines available. The project is yet to air on the radio."

Community radio overseas: After the successful implementation of the community radio in Karnataka, Girish was invited to implement in one of the rural areas in South Africa

How does it work?
There are four types of radio sets through which the shows are aired — radio booth, Pi Desktop, Pocket Pi and Personal Pi — and all of these work on WiFi. Girish and his team used a microcomputer called Raspberry Pi for the installation of this radio booth. He also connected several WiFi routers and created a private network. Since coin-operated payphones were lying unused in different corners of the village, Girish collected them to set up a booth where people can dial in to listen to a show. Whenever children record the show, they upload it on to the server. Every show has been assigned a particular number. When people pick up the receiver, they can hear the numbers and the show names and, thereafter, it's in their hands to choose which show they'd like to listen to.

Girish, who is happy with the response they have received so far, says, "We have installed these telephones in two different places including a bus stand and Aralikatte, where elders and women spend their time. A few of our volunteers or people in nearby shops help people operate these telephones. And not just listening to the shows, people can give their feedback too and even suggest a topic they want the children to speak on."