Jyothi Raj is one of the few rock climbers who does not use any safety harnesses while climbing. He aspires to represent India in Olympics 2020 or 2024

We all have that one turning point in our lives which changes our lives and our outlook towards it. For Jyothi Raj, who is a well-established name in the field of rock climbing, that turning point came when he decided to commit suicide. Originally from Tamil Nadu, when he was three-years-old, he was abandoned by his parents in a temple. An old man found him in Chitradurga, but did not take good care of him. He would always abuse and curse the child. Jyothi decided to end his life when he was 18 years old and arrived at Chitradurga Fort to do so. Narrating the incident which steered him from committing suicide, he says, "I wanted to jump from the top of the rock. Hence, I observed how a monkey climbed the rock in such a short time. I started climbing the rock and the crowd around started cheering me on, assuming that I was a professional rock climber. When I reached the top, I was happy and my eyes were filled with tears. That's when I became aware of my talent and decided to do more of this."

Jyothi practised climbing the huge walls of the fort without wearing any protective gear. During the weekends, when tourists visited the fort, he would exhibit his talent in front of them and they would pay him for it. Many such tourists recorded videos of him climbing rocks and uploaded them on YouTube. A few government employees even purchased a pair of sports shoes for him which are meant for rock climbing. Then, Jyothi started training many kids and adults in rock climbing. Some of them went on to join the Indian Army and a few of them joined the police force too. Keeping palms dry is essential during rock climbing, but because chalk powder is costly and Jyothi cannot afford it, he uses magnesium carbonate to keep his palms dry. Jyothi is truly one of those very few people in the world who don’t use any protective gear while climbing mountains or rocks. 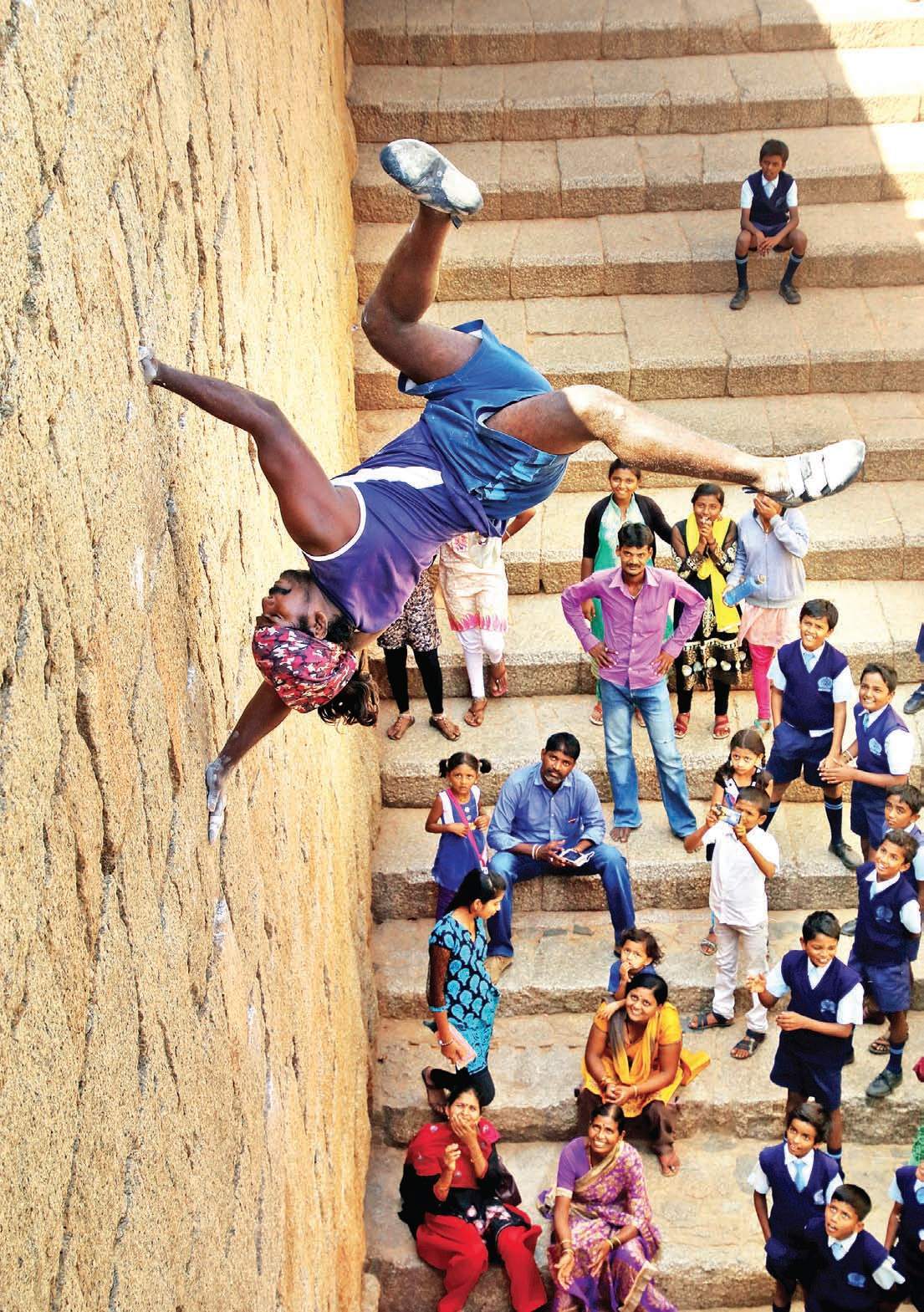 Taking a right grip: Jyothi Raj climbs the wall in the Chitradurga fort and the tourists along with school children watch him carefully (Pic: Shimoga Nandan)

A rock climber might lose his life if his grip is not steady. Jyothi came very close to losing his when he was climbing a rock in the fort one day and he happened to fall from a great height and broke his leg. He had no money and the doctor generously performed the required surgery free of cost. Thanks to his strong will power, Jyothi resumed rock climbing. This time, he used only one leg to climb rocks as he had a rod fixed in his other leg. "My friend Praveen, who is also a rock climber, came to my rescue and taught me how to use ropes to climb rocks. Soon, I volunteered with the government to rescue people who used to drown in Jog Falls and sometimes, even to retrieve dead bodies of young boys. During one such rescue in Jog Falls, I lost my grip and ended up in a small hole inside a few rocks. A friend of mine who was waiting for me informed the police that I had not returned from the rescue operation. They were not able to trace me and I ended up spending 36 hours in that small hole. With no other way out, I jumped into the water, which was 300 feet below me, and finally, the police rescued me. Though I was badly injured and hungry, my heart remained strong and I never gave up," says this young man who thinks his strong determination is his biggest plus point.

Jyothi has participated in various state-level rock climbing competitions and has won medals. But he has always aspired to participate in national-level competitions and Asian and Olympic games too. Therefore, he has been undergoing rigorous training in Bengaluru. Jyothi says, "There is climbing at the national-level and Olympic games and there have they have wall climbing only. Hence, I will be participating in the same. After the incident at Jog Falls, I continued to stay at home for a year or so. This led me to put on more weight. My trainer Praveen suggested that I lose weight in order to give the best performance. Every day, I wake up at 4.30 am and walk from my home to Sree Kanteerava Stadium. Exercise, jogging and artificial wall climbing are all part of my routine. I also practice for four hours in the evening and for more than eight hours every day. The national-level competition for wall climbing will be held in November and before that, I must lose a few more kgs. I have reduced my weight from 99 to 78 kgs and the recommended weight for wall climbing is 62 kgs."

Jyothi, who aims to bring the gold home to Karnataka, is looking for sponsors who can help him fund his diet and also participate to represent India or even build his own wall to encourage people like him at Chitradurga.