When you stop being curious, you grow old: Why Sudha Murty doesn't care about awards or honours

Well-known philanthropist and Chairperson of the Infosys Foundation, Sudha Murty turned 69 recently. But her evergreen charm and sense of humour will make you wonder whether she is, in fact, ageing backwards! She claims that the secret of her ‘agelessness’ is her curiosity. “As long as you are curious about things, you will not grow old. The moment you stop being curious, your age will get the better of you,” she laughs, letting us in on something we can’t seem to wrap our heads around: she has never celebrated her birthday in her life!

Sudha admits that her innate curiosity about people and what they are capable of achieving is what led Infosys Foundation, the philanthropic and CSR arm of Infosys, to introduce the Aarohan Social Innovation Awards last year, which was established with a vision to recognise and reward individuals, teams or NGOs that are developing unique solutions for the social sector that have the potential to positively impact the underprivileged in India. Through these awards, the Infosys Foundation aims to help leading innovators in the social sector scale their innovations and improve lives. Infosys Foundation is awarding a sum of up to Rs 50 lakh to help relevant innovations scale up. After the resounding success of the first edition of the Awards, the Foundation has announced the second edition recently which will follow the same format as its predecessor by selecting 12 social innovators from six different categories — Healthcare, Rural Development, Destitute Care, Women’s Safety & Empowerment, Education & Sports and Sustainability.

“The main idea behind instituting these awards was to identify innovations that could make life better for the common man. I believe that Indians are capable of  ‘jugaad’ (a flexible approach to problem-solving that uses limited resources in an innovative way). We are very resourceful and are capable of making use of whatever we have to its fullest potential. What I have noticed is that such talent mostly comes from Tier II and Tier III cities — I read an article recently about a small-town girl who converted a cycle handle into a washing machine. So you see, our country has potential. We just have to equip these innovators with resources and support, and they will create magic!” Sudha says with a twinkle in her eye.

Ask her which innovations from last year truly impressed her and she says, without a hint of doubt, “Everything! From the farmer from Rajasthan who developed an affordable weed removal machine that processes weed into green manure to a group from Maharashtra who came up with a novel water-disinfecting hand pump — everyone was so inspiring and wonderful. We look forward to meeting a whole new set of innovators this season and hope to be blown away by what they have to offer,” she says, adding that they have received more than 1,000 applications so far and that the last date for receiving applications is September 30.

The other side of her

A prolific writer who has authored 30 books till date that have sold 26 lakh copies across India, Sudha excitedly tells us that she has two books in the pipeline. “The first one will deal with women in mythology and is titled The Daughter From a Wishing Tree. Mythological books mostly focus on the men and their perspective, so I wanted to do something different. Yes, there are authors who have come up with the female perspective, but they usually revolve around Sita and Draupadi. For this reason, I have completely excluded these two characters from the book," she says, “The second book is about my 8-month-old puppy, Gopi. He is a paneer-loving Golden Retriever who makes me retrieve everything for him, including the ball when we play fetch together. (laughs) The book will mainly look at life from Gopi’s perspective, including doggy shenanigans with his canine friend, Ginger.’’

Being a multilingual writer and delivering bestsellers in English, Marathi and Kannada on topics ranging from personal experiences to children’s tales, is no easy feat. So, does she have a writing process that she swears by? “No, not at all. Writing is very spontaneous in my case. I don’t have a writing discipline — like some writers say that they write for 30 to 45 minutes a day without fail. But I do prefer to write in the mornings. I ponder over an idea that may have randomly sprung up in my head for days and weeks before acting on it. When I cannot hold it in any longer, it comes out as a story,” she explains. 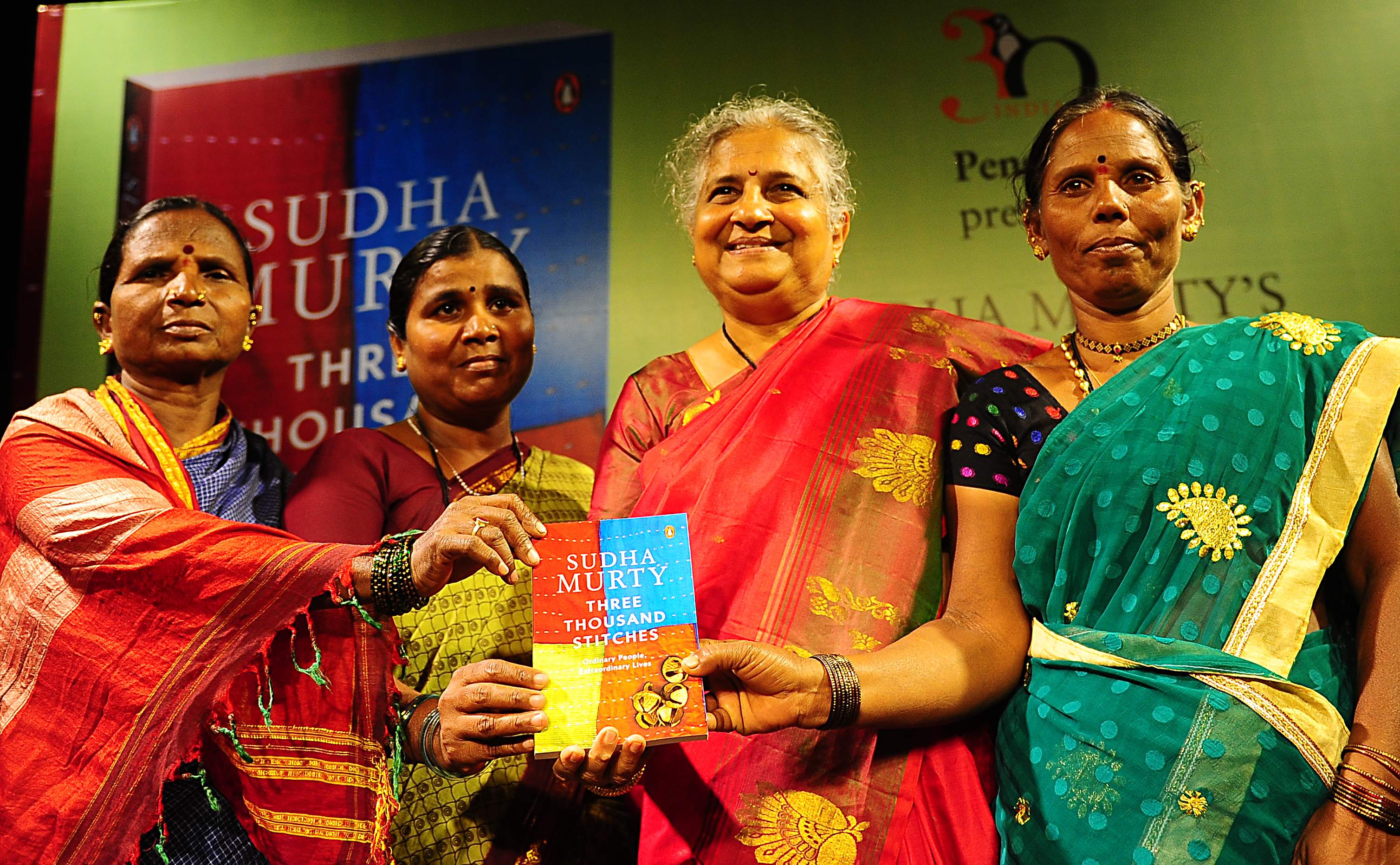 All smiles: Sudha Murty with three devadasis at the launch of her book Three Thousand Stitches in 2017 | Pic: TNIE

Interestingly, Sudha reveals that children are her most honest critics. “Many children come to me and tell me about how my books have inspired them. For example, a couple of kids, studying in Class 3 and Class 4, came up to me a few days back telling me that my book How I Taught My Grandmother to Read had inspired them to teach their grandmothers to read and I found that to be really heartwarming. Most of the feedback that I have received are from children. Children always give honest feedback and always have something to say about my books, which I really like,’’ she reveals.

Truth-teller at her best

Shifting focus to a more serious topic, we ask Sudha about the reason behind her declining an honorary D Litt from Punjab University recently, and she has no qualms about telling the truth. “Everybody (in the selection board) should be happy about giving you the honour and they should unanimously select you. If some people are not happy, then why accept the award? Recently, when IIT Kanpur presented me with an honorary doctorate, I asked them, ‘I am a philanthropist not a technologist of any kind. Why give me this honour?’ But they replied saying that philanthropy makes you more human than technology does and so I was happy to accept it,’’ she admits, adding, “But none of these awards or honours really attract me. When I work with people, trying to alleviate their problems, and when I get positive responses from them — that’s my award. Nothing motivates me more than knowing that people are happy with what you’re doing for them.’’