One of the most monotonous things about driving around Indian cities late at night is staring at the plain, characterless shutters that keep shops (and their wares) safe after hours. Imagine a world where these dull and worn out shutters of old shops can be brought back to life with the help of art. That's exactly what two young female artists in Pune are doing with their collaborative street art project called A Fresh Coat — as they set about bringing glamour and colour to the old shutters to shops in the city's oldest market area — Raviwar Peth.

As this area is particularly famous for some of the oldest wholesale shops in the city, it is mostly bustling with life during the day when the shops are open. Once the dull, grey shutters go down, the area becomes quite bleak and lifeless as customers and traffic has now completely vanished. Annushka Hardikar (24), a graphic designer, and Alefiya Kachwalla (25), a digital marketer, are using these sombre shutters as their canvas and are creating magic through their art to brighten the streets.

It all began with one shop

Alefiya, whose father has a paper shop in this area, used to spend time there ever since she was a child and then realised how much that space actually has to offer — not just the variety and rates of the products, but people who have been there for generations, some since the inception of the city. She thought that there needed to be a way to document all of that rich culture.

This led Alefiya to approach Annushka for the painting project and there was no looking back. "Stories about the families who owned the shops, about how they set up the shops, the city, Alefiya felt that those were fascinating and that was the culture that Pune as a city has been upholding. We thought these stories needed to be told and the best way to that is through art. We began planning from December 2018, she explains. 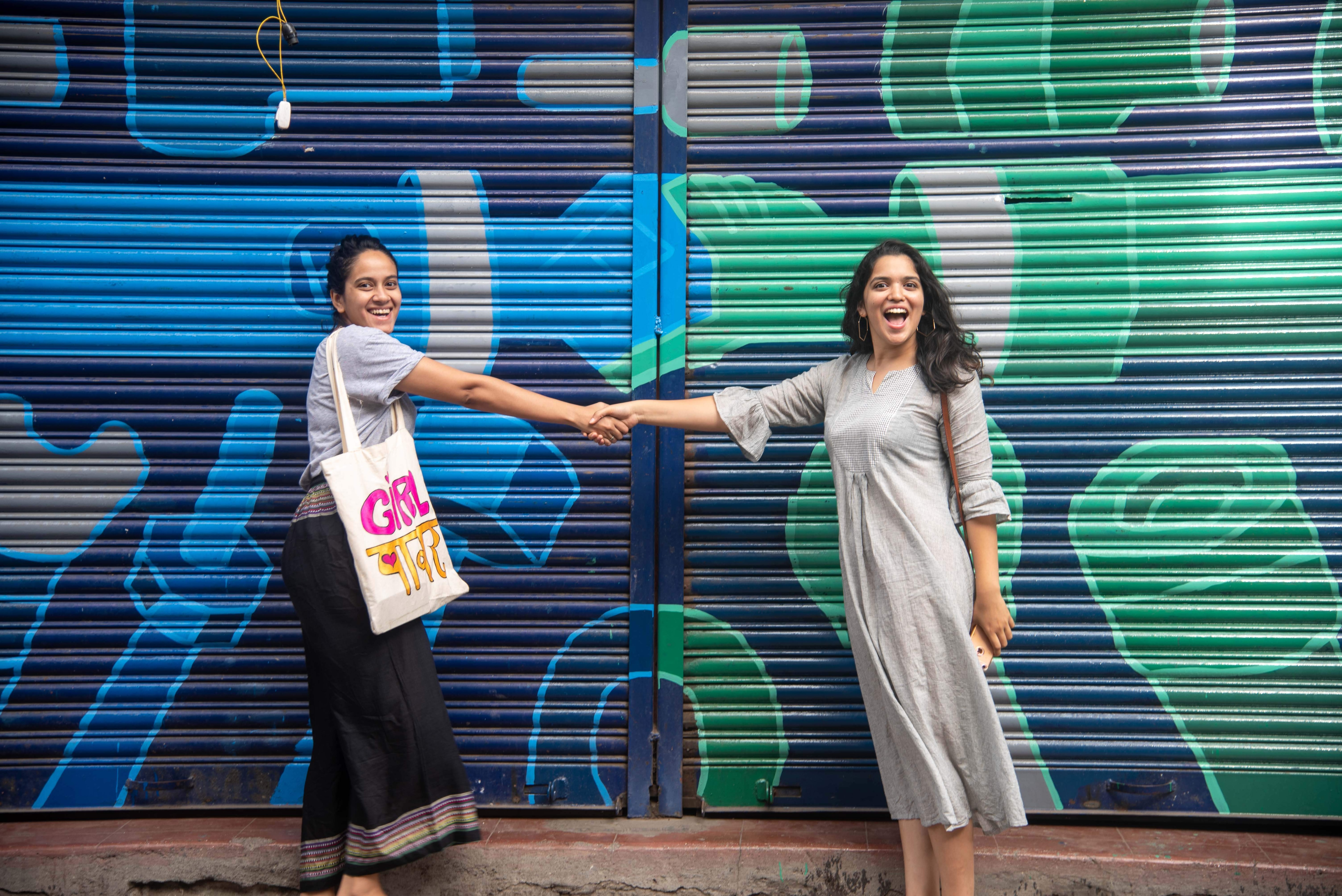 Artists alert: Annushka Hardikar (24), a graphic designer, and Alefiya Kachwalla (25), a digital marketer, are using these sombre shutters as their canvas and are creating magic through their art

When walls get stalled, paint shutters

The original idea was to paint walls. But then they had a brainwave, "It was initially difficult to plan the art project in the area as we did not have enough empty walls to play with. But the idea of using the shutters clicked suddenly. We planned to use them to depict the stories of the shop and little bit more about what the people there are like. And that's how this project began," says Annushka.

Alefiya met Annushka through a common friend and then bonded over their mutual love for art. Annushka is an illustrator and visual artist, who studied at the Srishti Institute of Design in Bengaluru before this, then worked in Mumbai for a year, and is currently a freelancer. Alefiya studied at Symbiosis School of Liberal Arts in Pune and now is doing her Masters at the University of Melbourne. She also freelances as a digital marketer.

On April 1, 2019, the duo started off with Alefiya's dad's shop as their first canvas. The shop is called King's Paper and Stationery. "What we did was sit with the owners, interview them, have a detailed conversation, ask them about their stories, about their history, how they came to be and why they sell what they sell. We decided that the artwork would be unique to that shop and their stories," adds Annushka. 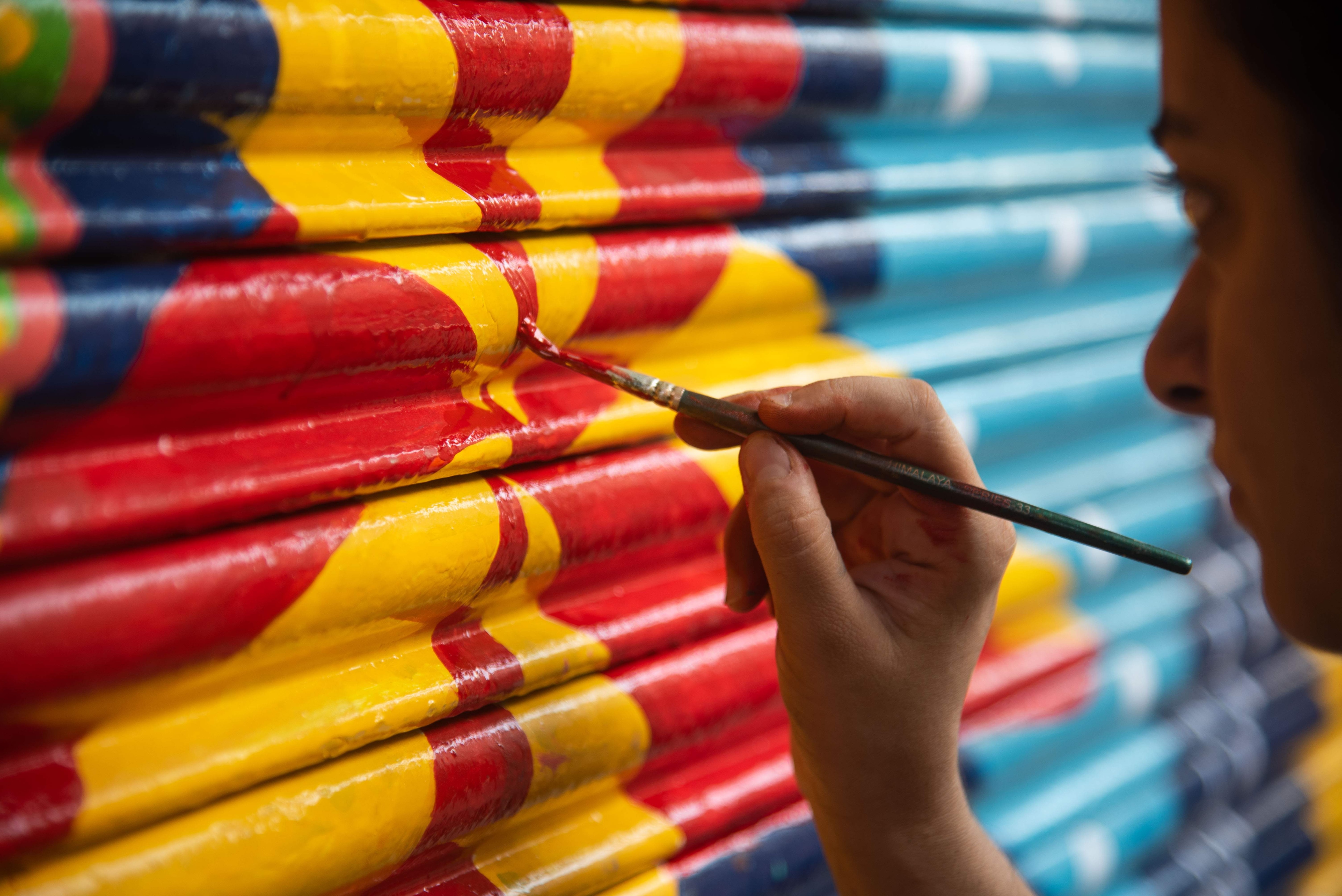 Painting legacies through shutters: The duo has completed 20 shutters and 18 shops in total till now, and they had 15 artists and over 30 volunteers on board for the first phase of their project

The shopkeepers caught on

They hadn't set any kind of parameters for choosing shops or which shutters to paint. When they were painting their first shutter for Alefiya's father's shop, it got them a lot of attention. Pretty soon, other shopkeepers came and asked about what they were doing and that's how their numbers grew. "We got the shop right next to the first one, we grew organically and that's what was exciting and satisfying. It attracted a lot of customers to these shops as well as a result of the paintings," the 24-year-old visual artist explains.

And that's what set the juggernaut rolling. The duo has completed 20 shutters and 18 shops in total till now, and they had 15 artists and over 30 volunteers on board for the first phase of their project — April 1 to June 1, 2019.

So, how hard or easy is it to paint these shutters? "Shutters mostly are metallic ones, some are wooden. The paint we would typically use is oil-based as that is what lasts longer, has a better shelf-life and does not get corroded easily. Each artwork was created with different artists," says Annushka. She explains that the shopkeepers had different demands — while some were keen on showing their legacy, some wanted to focus on what they sell. "One shop wanted to show that they wanted their customers to be partners, they believe in the collaborative spirit, so we picked out keywords from their interviews then relayed it into the artwork. Based on the feedback we would get for each draft from the shopkeepers, we would then edit accordingly and finalise and then paint it," she adds.

They always paint on Sunday. While rolling shutters take longer to paint, flat wooden shutters are faster and easier to work on. "We would be mostly done in three hours, like from 6 am to 9 am on Sunday mornings. We required more people on bumpy shutters and it would typically take an entire Sunday, or if touch-ups were to be done then we came on one more Sunday and finished everything," she says.

The duo took the help of several artists and volunteers as it clearly became difficult for just the two of them to paint entire shutters. "We began putting out the shutter pictures that we were working on, on our Instagram page. I am a visual artist so people who follow me started contacting some artists approached us, some we wanted to collaborate with and thus and wrote to them. All the volunteers hopped on board just with the help of social media — they saw pictures on our Facebook and Insta pages, read about it, heard about it and then wrote to us," says Annushka.

Some of the shutters they painted: 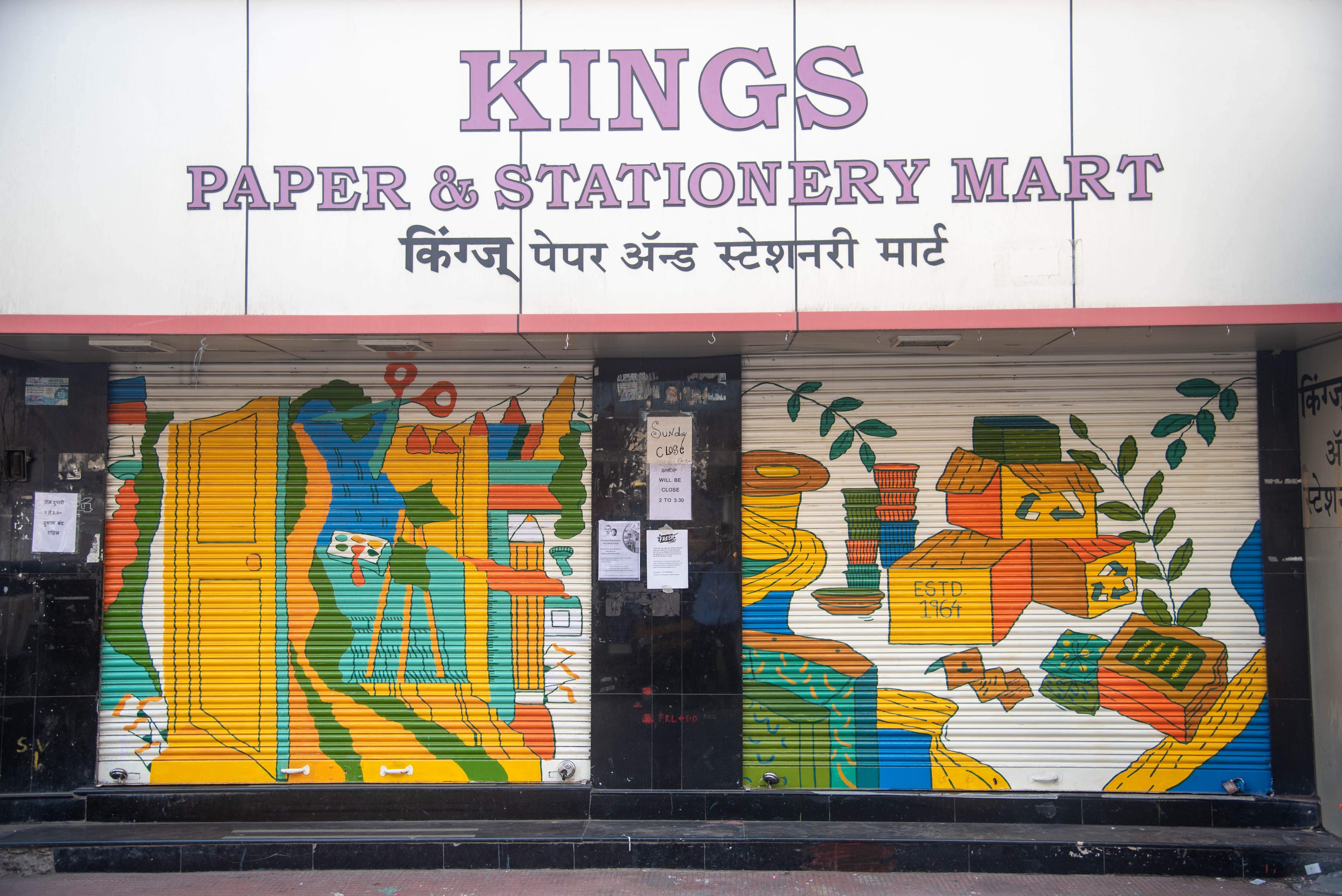 Shutter fever to go all over?

During the first phase the two artists put in money and charged the shops only for the basic paints. While they are already planning for a phase two, they would like to grow and get a team on board. "We have also begun a crowdfunding initiative on Ketto for the next phase, so that we can also be more sustainable and are able to do it in larger parts of the city. We want to make it much bigger in the future, take it to other cities as well. We would also like to conduct heritage walks through these lanes so people can enjoy the artwork," says Annushka.

Their next phase is set to begin likely at the end of November or early in December this year as they are still in the process of finalising the shops and areas.