This young plogger from Delhi is running over 1,000 km to make our roads litter-free

The Central Government boasts of the Swachh Bharat Abhiyan, wherein, it has been spending crores of rupees to keep our roads and surroundings clean for over four years now. But do we, as common citizens, really care? Hard to believe we do because one continues to find empty food packets or cups littering the road to date. We continue to walk with our usual lackadaisical attitude thinking it’s not our job to pick up the trash. Ripu Daman Bevli, a young runner from New Delhi, is propagating the idea of jogging and picking up litter at the same time. Called plogging, this exercise-cum-social initiative can actually help in keeping the roads clean and keep you in shape too.

Getting back to Ripu, he has conducted over 300 plogging drives in 21 cities across India and participants include people of all age groups and from various backgrounds, even differently-abled state-level runners have joined in. This time, he has taken on the mammoth task of running to cover 51 cities which comes up to around 1,000 km. Starting from Kochi in Kerala, he also has Tier II and III cities on the list. Narrating the story of how it all started, he says, "I have worked for a few reputed MNCs in India and hence, I would get very less time to take care of my health. I had put on a lot of weight and desired to lose it for good. Hence, I started running longer distances which really helped me lose weight and keep fit. The idea of picking up trash came to me when I used to jog in the wee hours of the morning every day. Since there was very less traffic and fewer people on the streets, I would pick up trash strewn about on the roads and footpaths and throw it in a dustbin. This way, I would keep the roads clean and remain fit at the same time. Initially, it felt a bit awkward as people would stare at me and pass comments like, ‘It is not our job to pick trash off the roads.’ Gradually, they understood that I was doing selfless service to the city. Soon, other people joined my initiative and helped me pick up trash." All over the place: Ripu will be travelling to Mumbai, Kolkata, Pune, Bengaluru and a few other cities

A page on Facebook
In order to inform others about the activities they were carrying out so that more participants can join in, Ripu created a Facebook page called My City My Responsibility in 2017 and on other social media platforms too. "Here, I post all the activities that I carried out individually or with the community to make roads litter-free. Many youngsters on social media started following me and they joined the initiative too. People in different cities including Mumbai, Pune, Delhi, Bengaluru and many other places invited me to start this initiative in their city. I would go there and work with them. As soon as they understood the techniques involved in plogging, they took up the task on a regular basis. Later, we renamed the group and are now called Ploggers of India. The mission remained the same — making the streets and our surroundings litter-free."

Where does the trash end up?
According to Ripu, there is a difference between plogging and clean-up drives. He says, "Plogging need not be organised for a particular group in a particular place. In this concept, anyone can start the initiative and start picking up the trash from any spot, not just one particular place. But this process does not end here. We have to set norms for ourselves to move towards becoming zero-waste households, cutting down on single-use products and so on. Only then, plogging will be effective. Apart from this, the larger objective of convincing people to not litter is achieved. During plogging, as every individual toils to pick up the trash, they will make sure that they don't dirty the roads or public places next time."

In case of smaller plogging drives in India, Ripu and his team inform participants that there are dustbins to dispose off the trash they pick up. In larger plogging drives, they tie-up with several stakeholders and see to it that the trash is segregated and the maximum amount of it goes for recycling. "Here, I talk to people about the things that can be recycled and single-use products that should be avoided. But single-use doesn't mean only plastics. It can be any product because they end up in landfills anyway.” 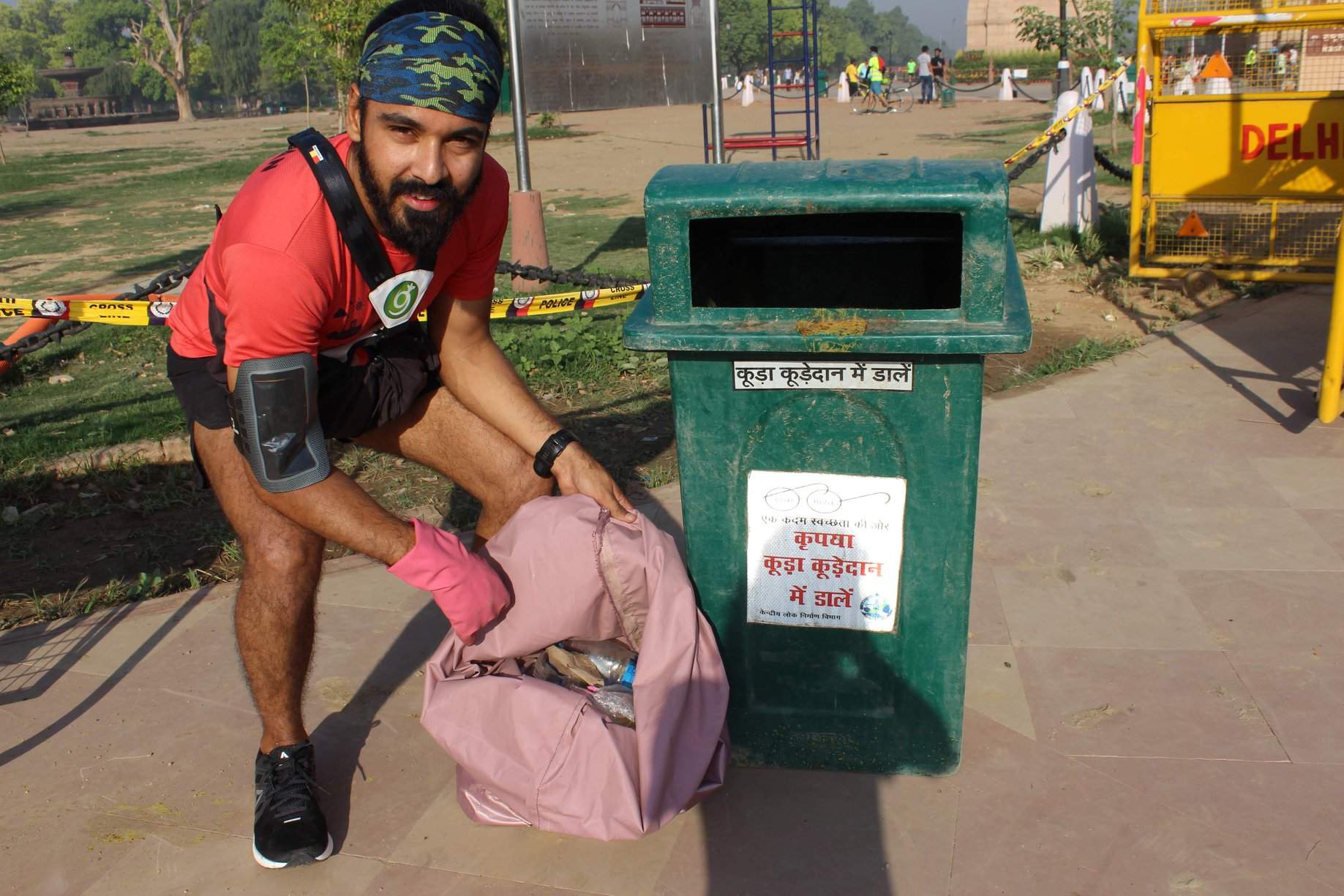 Run and clean: Ripu suggests, if you find someone else's trash lying around then pick it up and dump it in a bin

Say no to plastic
Currently, Ripu has started plogging in 50 cities and while he is at it, he is practicing the concept of Plastic Upvaas. This means that he will not consume or eat anything wrapped in single-use packaging or plastic during the campaign. The whole activity is being done to encourage everyone to adopt a zero-waste lifestyle. Ripu and his team need your help in raising the funds to travel across the length and breadth of India. "The money that people contribute to this mission of making India litter-free will be used for travelling, accommodation of a small crew of four to five people, food which will help us sustain this mission and reusable gloves, bags, boxes and masks for plogging in each city. Every rupee will be used for the purpose of executing this campaign and spreading awareness to bring about change in the mindset of people with regards to cleanliness," concludes this enthusiastic ultra-marathon runner.