Ashwathy Satheesan, a designer from Ahmedabad, has conjured up a pen that can help those plagued with Parkinson’s to write just like anybody else!

Writing is an ability that carries great potential. It was a tool, or rather an instrument, that enabled philosophers, artists, poets, authors and historians, among others, to share their views and opinions through the centuries. It is also a priceless means of recording pieces of evidence and information, which would otherwise be lost somewhere down the line. Above all, it is an art that has existed for thousands of years and will continue to exist as long as humans intend to depend on it as a medium of communication. However, writing isn’t always so accessible or convenient.

For those afflicted with learning disorders or other ailments, writing becomes difficult, sometimes even impossible. Take for instance, the unfortunate victims of Parkinson’s disease. This dreaded illness, which causes uncontrollable tremors in one’s hands, along with stiffness and loss of balance, can make it very challenging for the patient to hold a pen or pencil steady whilst writing and this eventually takes a toll on them. A new invention was the need of the hour, something that could empower those afflicted with Parkinson’s to write without the fear of medical hindrance. Ashwathy Satheesan, a NID, Ahmedabad graduate currently settled in Thrissur, Kerala, saw this as an opportunity to conjure a magical apparatus that could, once and for all, enable the aforementioned population to pen down their thoughts and ideas confidently. “I am passionate about social innovation, various types of sustainability and designs that cater to special needs,” says Ashwathy.

A recipient of the James Dyson Award 2019, which honours innovators for outstanding creations that ‘encompass the breadth and width of human needs,’ Ashwathy was selected as this year’s winner for her stabilising pen that is something of a wonder! And what triggered her interest in doing so is a fascinating story in itself. “There are some great organisations that exist for people with Parkinson’s disease worldwide as well as in India, like the Michael J Fox Foundation and the Parkinson's Disease And Movement Disorder Society, India (PDMDS). In 2017, the government included the disease in the Disabilities Act 2016, which enables the patients to avail benefits from government schemes meant for the disabled, such as reservation in jobs, scholarship and pension,” she informs. “At the National Institute of Design, we are encouraged to select a problem area we are interested in and try to solve it. This is my second research project and I really wanted to do something related to inclusivity and for people with special needs,” she adds. 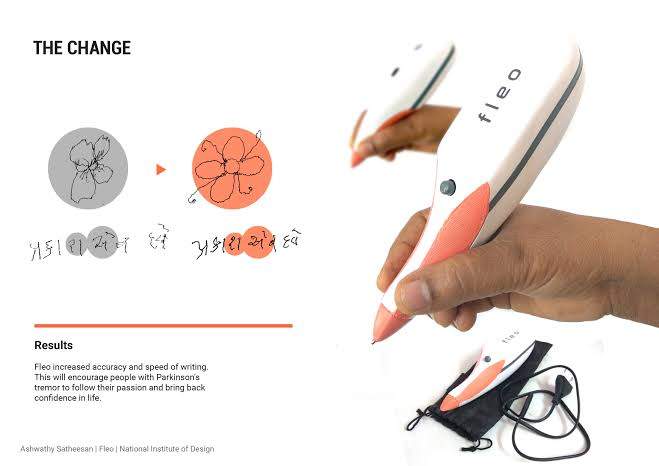 How it works: This diagram shows the way the pen enables those with Parkinson's to write with relative ease! (Pic: Ashwathy Satheesan)

According to Ashwathy, an estimated 10 million people worldwide are living with Parkinson's disease. In India, around 300 to 400 people out of every 1,00,000 are diagnosed with Parkinson’s. It is a progressive neurodegenerative illness and there has been no real cure for this illness to date. “I knew a few people afflicted with Parkinson's when I was in school and this was definitely a contributing factor. I am passionate about working for people who have special needs,” she says.

Her invention, the unique pen designed for those suffering from the disorder, is named Project Fleo. But this isn’t just a pen — it appeals to a certain degree of sympathy, compassion and emotions too! “People with Parkinson’s disease tend to spend a lot of time alone. Different therapies involving dance, art and music are often part of their treatment. However, while products are available in the market for helping them with their daily routine, there are very few options in the areas of writing and drawing. Fleo caters to this need that is often overlooked. It gives people with tremors (common with patients of Parkinson’s) the freedom to draw, write and occupy themselves. The unique self-stabilising effect of Fleo’s filters mitigates unwanted vibrations caused by the tremors. It aids and does not restrain the user. By allowing people to continue writing and drawing, Fleo helps bring back the confidence in their lives,” says Ashwathy. Breaking borders: Ashwathy spent months researching on the major issues experienced by those afflicted with Parkinson's

It took roughly two months to carry out the necessary research and development. “During my interaction with people suffering from Parkinson’s, I observed and understood their difficulty when it comes to performing day-to-day activities and that’s how I realised that they needed help with writing and drawing. I met many poets and artists who had completely stopped pursuing their passion because of Parkinson’s. I even met retired teachers who advised me on how to go about it,” she says. The creation of the pen itself was even more challenging, as it took several tries.

“During the different stages of this project, from research to final prototyping and user-testing, many mock-ups and prototypes were made. Initial rapid mock-ups helped set up the general direction, while the later ones were focussed on finding the right engineering principles. This stage was crucial for proving the concept and to get optimum results. All these prototypes were made at NID using the in-house workshop facility and machinery. The staff, my guide and all the workshop facilitators were of great help during all these phases,” remarks Ashwathy. She intends to use the prize money from the award, 2,000 euros, to fund her next invention, whatever it may be!

However, she also wishes to take her little pen to the next level. “Fleo is at a very nascent stage, wherein, I have proof that it works. If I do get funding and if I could get to collaborate with subject matter experts, then I feel it could go a long way in empowering those suffering from tremors,” she concludes. Inventors like her are a major blessing for our society, as they willingly go out of their way to help those in distress. Instead of launching more food delivery apps and online shopping platforms, creative and useful tools such as Ashwathy’s Fleo pen ought to be encouraged and supported. After all, a society is only as strong as its weakest link!