Why stand-up comic Syama Harini is a full-on comedy piece!

We chat with Syama Harini, one of the few female stand-up comics in Chennai, who can tickle your funny bone by laughing at her own insecurities

While in the midst of friends, Syama Harini would often grumble and whine about everyday instances that piss her off or how bad life is in general. But instead of offering a sympathetic solution or consolation, her friends would laugh at her. “I think people loved the way I used to talk about my problems. They would seem very entertained after every ‘complaining’ session of mine. So you see, I always knew I was funny and people referred to me as a ‘comedy piece’,” says the 26-year-old cheekily.

Today, Syama is a pretty well-known face in Chennai’s stand-up scene, even opening for biggies like Sumukhi Suresh, Zakir Khan and Sapan Verma. But the truth is, she did not always aspire to be a stand-up comic. “Theatre was where my heart was. I had acted in many plays right from my college days and continued to do so afterwards. I took up an acting course by Evam called First Rush, right after completing my Master’s in Economics from Stella Maris in 2016, and even worked with them on a few projects,” she shares, adding, “However, I instinctively chose only funny roles in plays. I was drawn to funny characters because I knew I could do justice to them.”

It was after watching stand-up mainstays like Karthik Kumar, Aravind SA and others create magic with jokes on stage that Syama felt like giving stand-up a try. “I didn’t know anything about stand-up and how it worked. That’s when spoke to Rabhinder, a stand-up comic who happened to be with Evam, who was instrumental in giving a direction to my aspirations. He advised me to write my own jokes and attend as many open mics as possible and that’s exactly what I did,” says the comedian who has performed at Chennai Comedy, Evam Stand-up Tamasha and Tanglish Comedy. 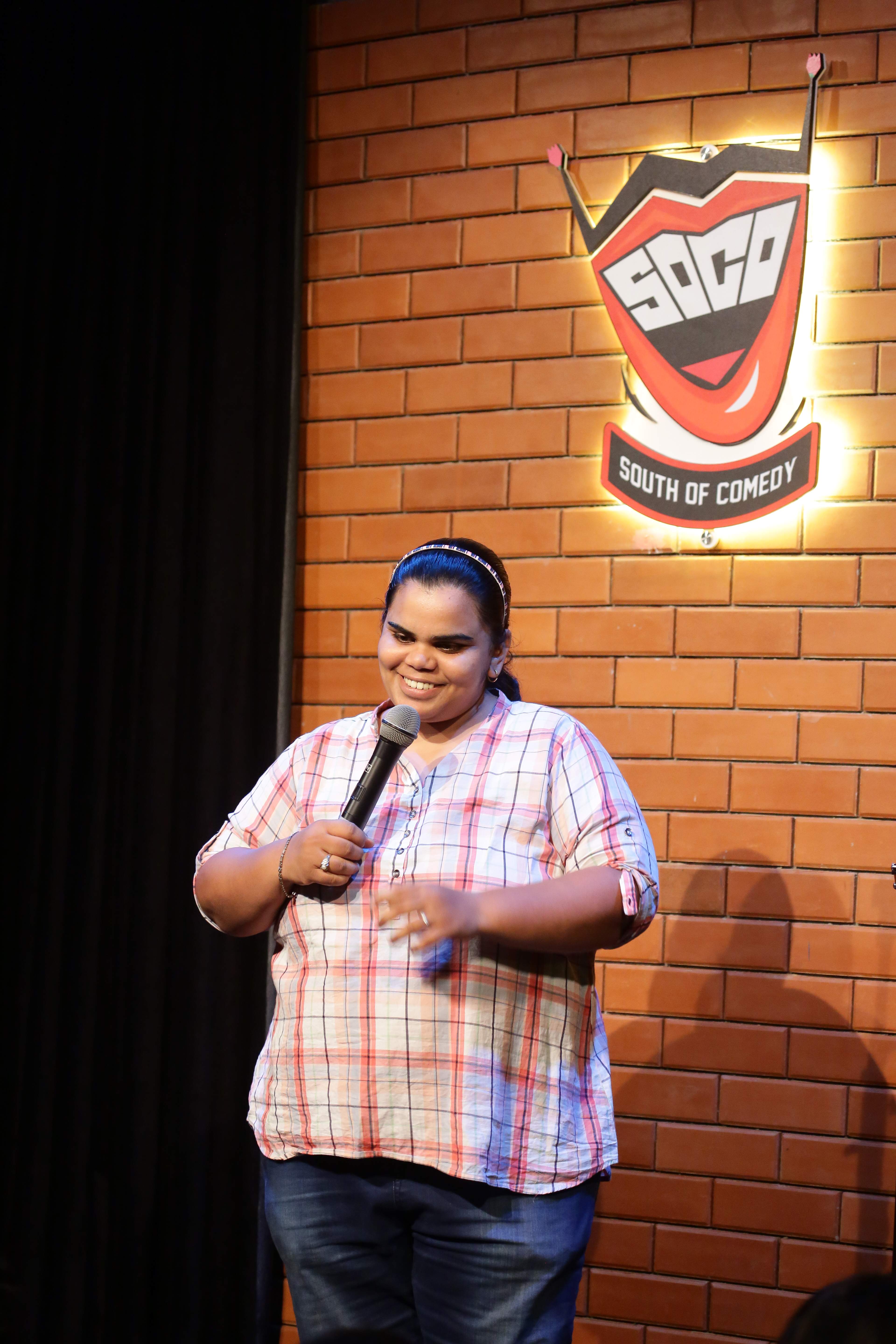 So how has Syama been able to hold her ground despite comedy being a highly competitive field? “I think being authentic and having the ability to laugh at myself has always worked wonders for me. All my sets are mostly about how life has thrown lemons at me – being single, fat and ‘friend zoned’ all the time – and how I use them to make lemonade in the form of self-deprecating jokes,” she giggles. She also believes that a stand-up comic should be confident enough to accept that sometimes people may not respond well to their jokes. “The long silences that follow a joke are sometimes very uncomfortable and unnerving, but you have got to keep moving to the next joke. As long as you are listening to me and engrossed in my piece, I am fine,” she points out adding that for a stand-up, it is okay to have many highs and lows throughout the performance, but it is very important to finish their segment on a high note. “For the ‘final kill’, it is always safe to use a tried and tested joke – that’s how audiences will remember you,” she smiles.

Ask her why there are not many female stand-up comics in the city, and she is quick to answer, “Honestly, I do not know why. We cannot blame this on a lack of opportunities as there are many groups that encourage women to come and join the stand-up scene. Experienced stand-up comics are also ready to help a new person in every capacity. So, it is up to women to take the plunge, as I did.”