Shashi Bhushan Singh takes cleanliness very seriously, and nothing will stop him from setting an example for others to follow

“Everything the light touches is our kingdom,” said Mufasa, King of the Pride Lands, in one of the most famous Disney movies ever made. The animals and beasts in The Lion King were particularly attentive to the state of their kingdom, maintaining it to the highest of standards when it came to cleanliness and orderliness. Nearly all of the songs incorporated a certain degree of self-responsibility, whether it was toucans disposing of banana peels, or elephants cleaning up the ‘mess’ graciously left behind by the little jumbos, or the giraffes that were constantly clearing the rubble around the watering hole. In the animated film, the king bestowed prestigious titles to those who performed such social deeds. In real life, however, things are vastly different. Shashi Bhushan Singh, a native of Dumari Kalan village, Sitamarhi Bihar, found this out when he received his own title as a tribute to his selfless dedication to cleanliness - Pagla Jhaaruwala, meaning ‘crazy sweeper.’ Given to him personally by the same men whose homes and towns he had spent months cleaning, this meritorious social worker is now struggling to make ends meet.

Shashi dropped out of school when he was in class IX, but unlike the success stories of famous American CEOs who left school and founded giant conglomerates, our social worker found himself on the dusty (and dirty) streets of rural Bihar. Undaunted by his lack of good fortune, Shashi took up a broom and began an epic cleaning mission across the entire village, despite the scornful looks on his friends’ and neighbour’s faces. “I developed an interest in cleanliness almost a decade ago when I saw the damage and destruction caused by the monsoons. My little village was hit really hard, and there was debris all around. I wanted to clean the place so that the residents could live better,” he says. The father of four received virtually no help from his ‘subjects’, for he was no king, and had to dedicate much of his free time to the cause. “I have dedicated myself to the cleanliness drive and spend most of my time promoting cleanliness and hygiene, as well as creating awareness in the neighbouring districts.”

Distance and logistics offered little resistance to Shashi, who soon began cleaning anything and everything that was out of place. “I clean wherever I see any garbage - it has become a part of my subconscious mind,” he says. He soon travelled all across Bihar, his ever-loyal broom in hand, and swept away to his heart’s content. “People thought that I had gone mad. But it should be an individual’s right to have a clean and hygienic environment. It should be the duty of the individual to protect the environment. We are all aware of global warming, and we should not remain a mute spectator or believe that saving the environment is the sole responsibility of the government.” Shashi remarks. His next sentence speaks volumes, and much can be drawn from its significance — “India is a country of villages.”

In 2011, he stared his own cleanliness drive, code-named Swachh Village. Preceding Prime Minister Narendra Modi’s larger initiative by more than half a decade, Shashi knew that his success pivoted heavily on the recognition and acceptability garnered by this undertaking. Sadly, he found no takers. “Swachh Bharat is only possible when we have Swachh Village. Swachh Bharat is the end goal, whereas Swachh Village is an identifiable and executable task to accomplish this end goal. In plain text, Swachh Village is the path to Swachh Bharat,” he says. Admirable words from an “unqualified man”, who ironically knows and cares more about the environment that most ministers in the country. He has much to share, and nobody to share it with. “After being branded as a madman, I initially felt isolated and unwanted. But now, I wear that tag with pride,” he says. 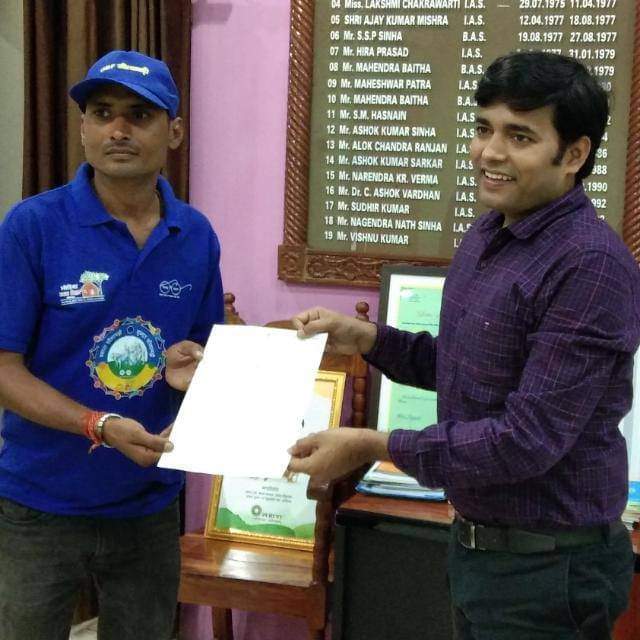 Shashi nurtures a desire to meet PM Modi and tell him personally about the results of his Swachh Village mission. “I have the experiences, pros and cons, feasibility, viability and suggestions for Swachh Bharat at my fingertips. But getting an audience with Modi is proving to be difficult. I’ve tried twice, and failed both times.” While actively seeking out the PM is probably going to take a good while longer, he has an idea which he feels will kick-start cleanliness at the immediate level. “Every village should have a Cleanliness Monitoring Officer, who should be vested with liberal powers and given adequate funds to carry out his duties,” says Shashi.

He also feels that cleanliness should be taught at schools and implemented at the micro-level. “I have visited and cleaned several major districts in north Bihar. I have marched from my village to Motihari and then to Patna. I have cleaned my village’s block office, the district collectorate, Sadar Hospital, and a few government hospitals in Patna. I have also been working as a ward member of my area, which allows me to work more on this cause. I firmly believe that my action is for the betterment of the society,” he adds.

Working part-time as an installer of water purifiers, he says that his wife has been his constant companion right from the very beginning. “She even sold all of her jewellery to make sure we have enough to eat and survive,” Shashi says. While he has received several awards and the occasional “thanks”, what he really wishes for is the day when people actively start protecting the environment. “I want to start my own NGO. I have even thought about its name - Swachhta Hi Sewa - even though I don’t have the money to realise it. My immediate plan is to help my villagers. My message to everyone is - do not listen to critics, for people will always make fun of you. Consider cleanliness as your duty towards the environment. Please lead by example and set your actions as an inspirational footprint,” concludes Shashi.

He has already set the cleanliness drive in motion, now all he needs is the moolah to keep it going. Shashi requests donations and contributions from those who can spare it - not for himself, but so that the future generations won’t have to walk through the muck to reach their schools. The government can learn a thing or two from him, even if cleanliness isn’t one of their foundation stones for ‘nationalism.’