The youngster wants to change his city back from the Silicon Valley that it is now to the Garden City that it used to be. But at the same time wants to focus on the emotion of people

Depletion of natural resources, especially trees, is a matter of grave concern. We all agree on that but not many are willing to do anything about it because we often do not find the personal connection with trees. Pramodh Chandrashekhar's organisation, Last Ripple, is not only working to bring back the green cover but also provide you with the personal connection that was lacking. How?

They make your beloved pet live forever even after they pass away — by turning their ashes into a plant.

But Pramodh did not always have this idea. When his grandmother died in April 2018 followed by 12 other relatives in quick succession, he was shattered. He wanted to do something for his loved ones who were no more. "I came across a video of the Capsula Mundi project and it changed my life," says the 19-year-old law student. "The Italian project has organic burial pods where the body is placed into a biodegradable container and buried with tree-seed planted directly above it making it a nutritional source for the tree," he explains. 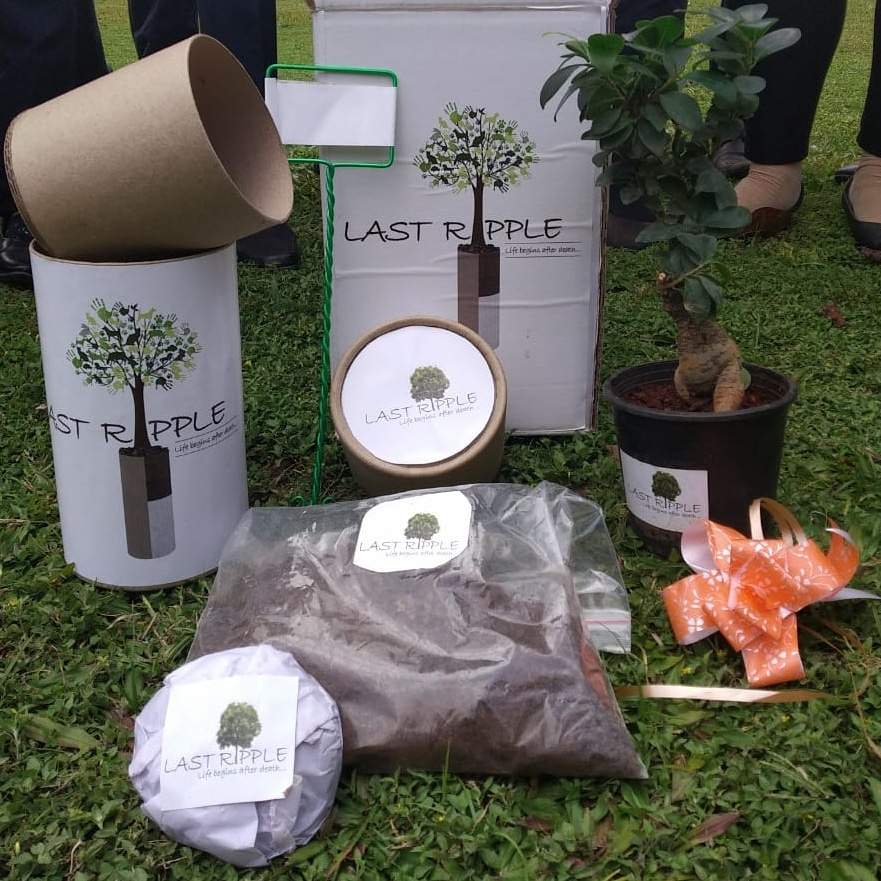 Keeping Love Alive: It's been seven months since Pramodh set up Last Ripple and they have had 15 plantations in Bengaluru itself and one each in Salem and Mumbai (Pic: LastRipple)

Pramodh was excited to try this out in his city, Bengaluru. "This became my dream. It was the best way to honour and remember those who were close to our heart. But not many of my friends supported me. It is more painful than a break up when your friends don't believe in you," says Pramodh. "But one of my friends suggested that I try to do the same thing but with pets. I loved the idea and I started my research. What I found was horrific. There were at least six lakh pets (not strays) in Bengaluru and the whole city had one pet crematorium. Around 1,000 of them die every month but only an average of 300 pet deaths are recorded each month. The BBMP treats dead bodies of animals as solid waste and the management of the dead bodies comes under solid waste management," he adds.

Pramodh wanted to do something for the pets and their owners. He went to the BBMP Animal (pet) Electric Crematorium in Summanalli. "The in-charge there loved what I had in mind. He told me that very few people take the ashes back home and this would be a great way to keep them connected to their loved companions," he says.

It's been seven months since Pramodh set up Last Ripple and they have had 15 plantations in Bengaluru itself and one each in Salem and Mumbai.

We have not been marketing ourselves. We have volunteers who work with us. We have a banner at the crematorium and people called us from there and then everything spread by the word of mouth

So how does this work? Once the cremation is done the Last Ripple team will put the ashes in a hollow cylinder and put a disc on it that will neutralise the high pH level of the ashes. "Then we put a layer of the nutrient-enriched soil and plant the sapling on it.," he adds.

The youngster wants to change his city back from the Silicon Valley that it is now to the Garden City that it used to be. But at the same time, he wants to focus on the emotion of people and the bond of love. "I didn't want to put a price on this. People paid us whatever they felt like. But on an average, it will cost around Rs 3500," says Pramodh. You can plan to plant the sapling anywhere you wish. Even inside a public garden. The Last Ripple team will geotag it for you so that you will not have trouble finding the tree even after a decade.