After shaping bats for Sachin, Lara, Kohli and MSD, this Bengaluru bat balancer only charges Rs 800. This is his story

This man modifies bats for the star batsmen in the Indian cricket team. Now he's a trusted bat doctor in different parts of India and has worked with the biggest cricket stars in the world

When an epic century is scored, it is always the batsman who gets the credit. But every single time India's cricketing greats like Sachin Tendulkar, Rahul Dravid, M S Dhoni and Virat Kohli have hit centuries, there is one man who feels that he has a personal stake in having made that happen. Meet Ram Bhandari, who is popularly known as the bat doctor and has designed bats for several international cricketers.

Originally from Bihar, Ram Bhandari first came to Bengaluru in 1979 in search of a job and eventually settled in this IT city. The early days were particularly tough, he recalls, "I struggled a lot while searching for a job during those initial days. From working as a waiter in a hotel to working as a bouncer in a bar, I have done everything. After I got married, I realised that these jobs will not help in the long run. Therefore I started working in a sports showroom called Players' Choice. Whenever the bats were damaged, I would repair them and customers were very happy. They would come back often and that's how I gained a following."

Part of that following — a constantly growing number — was a certain Rahul Dravid. It was with the encouragement of these players that he decided to start off on his own, "In 1999, I started a small workshop near my home where I repaired bats of cricketers who played for Ranji Trophy, state level matches etc. From then, there was no looking back," he beams. Today, he is a man who is heavily sought after, by his own admission "All the national and international cricket stars know me for my work." 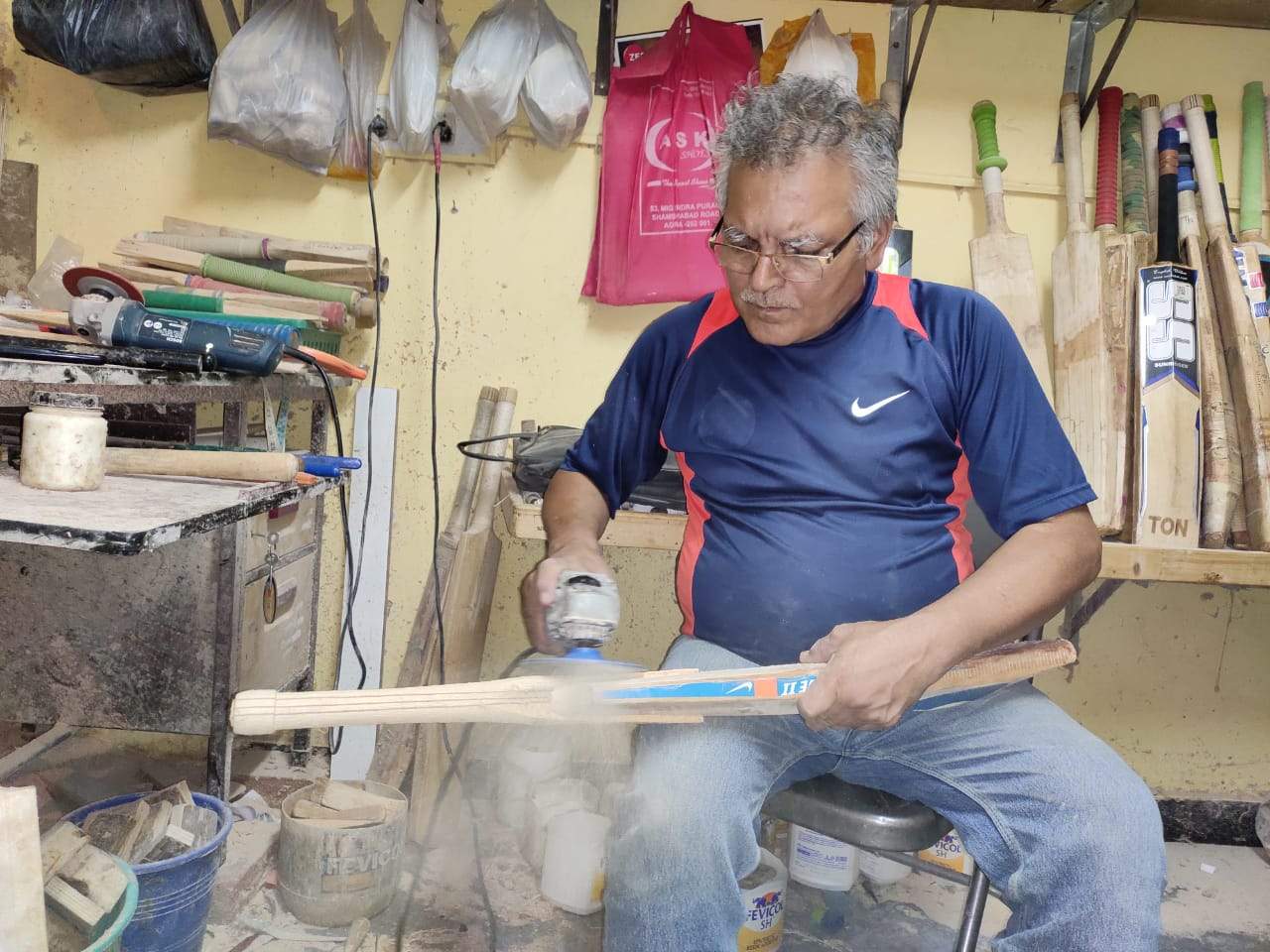 Famous everywhere: Apart from cricketer's bats, he repairs bats which are couriered by people living in different states

But how did he get so good at what he does? Ram inherited the skills of carpentry from his grandfather and honed them to a fine point. He says, "I never thought that these skills would help me earn a livelihood. My big break came only after Rahul Dravid got his bat repaired and he referred my services to other cricketers. That's how Sachin (Tendulkar), Harbhajan Singh, M S Dhoni, Venkatesh Prasad and Virender Sehwag came to me and trusted me to replace the handle," he explains.

You might wonder what changes he can make to bats which are already manufactured. Ram's work involves fixing the handle of the bat, making it lighter and better balanced. "Usually, the handle of the bats are round which does not allow the batsman the best possible grip. Therefore, I give it an oval shape so that their grip improves. Sometimes, they want new handles to be fixed. In such cases, I have to put a different handle based on their requirements," he explains.

Despite aerodynamic modifications made to bats by global bat makers, the immense pressure applied on the handle and the breakage that follows is almost inevitable — and cricketers simply don't like throwing bats away. It's a bonding thing, "Recently, Virat Kohli and a few others came to Bengaluru during the IPL season and got their bats repaired," he adds casually. Clearly, there's no generational shift that's affecting business. "Virat got a new bat for himself and wanted some modifications to be done. He called me to M Chinnaswamy Stadium and said that the bat needs pressing and the handle needs to be oval shaped. I did it for him and he scored a century after that. He even sent a 'Thank you' message to me. After this, Rohit Sharma also approached me." 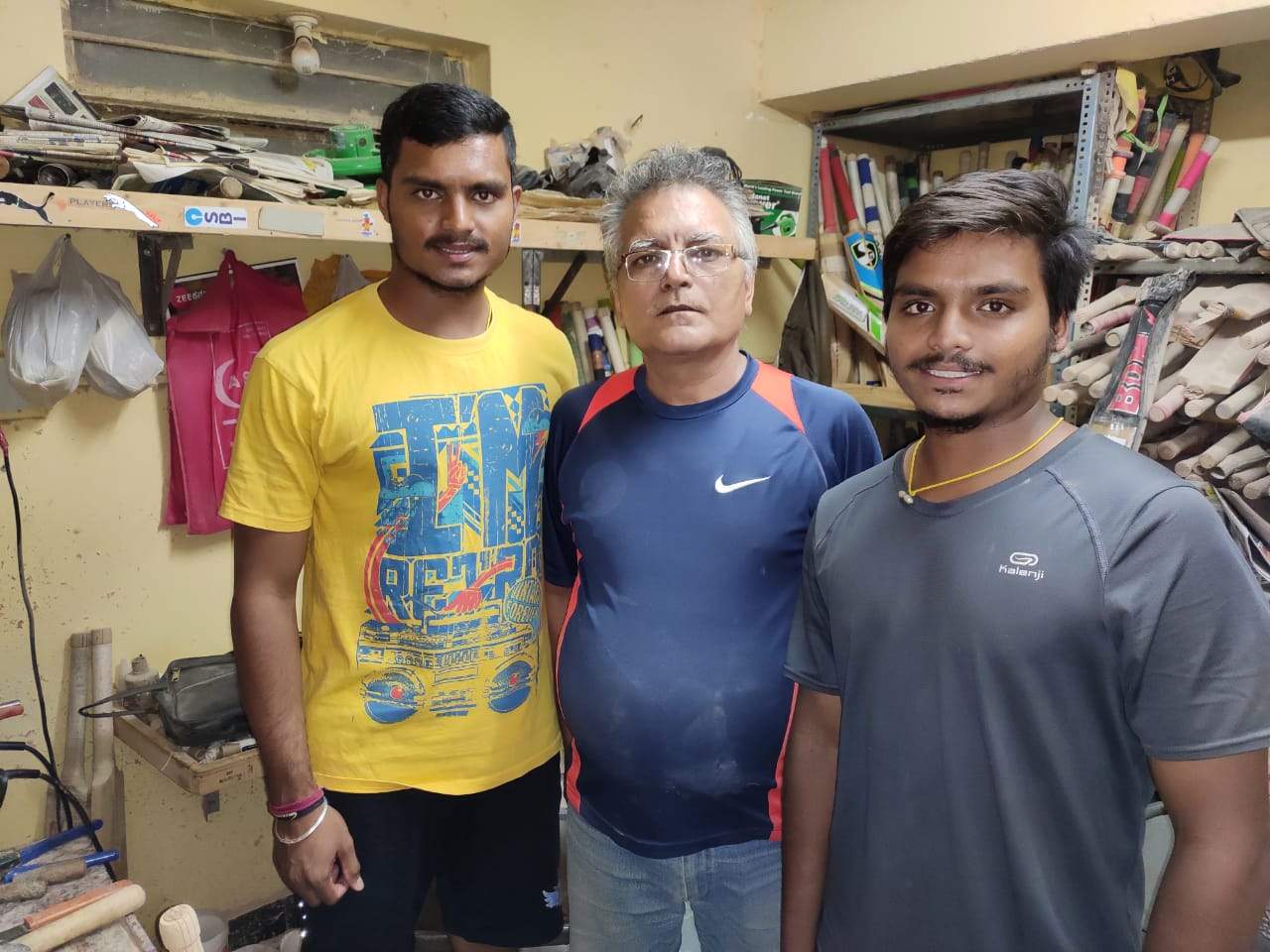 Cricketer sons: Ram Bhandari along with his sons Narendra and Dasharath who also play cricket

Apart from the modifications that the cricketers suggest, whenever Ram is invited to the stadium, he watches them play intently so that he can modify the bats on a custom basis. "I see their style of batting, body language and footwork. It helps me to make variations to the weight of the bat. The bat's weight also depend on the type of wood. Bats are made of English willow in England and Kashmir willow in India. Similarly, their weight also varies. The English willow bats are very spongy while the Kashmir willow is a bit rough," he explains.

Ram's coup de grace probably came when he helped Sachin (and India) find a flourish during a slump in form. After a particularly lean patch that was punctuated with calls for his retirement, Ram helped the master blaster reduce the weight of the bat from 1,350 gms to 1,250 gms. Immediately after, Sachin stormed back to form with a thrilling century. As a sign of gratitude, Sachin also gave Ram a crisp 500 rupee note for his work. 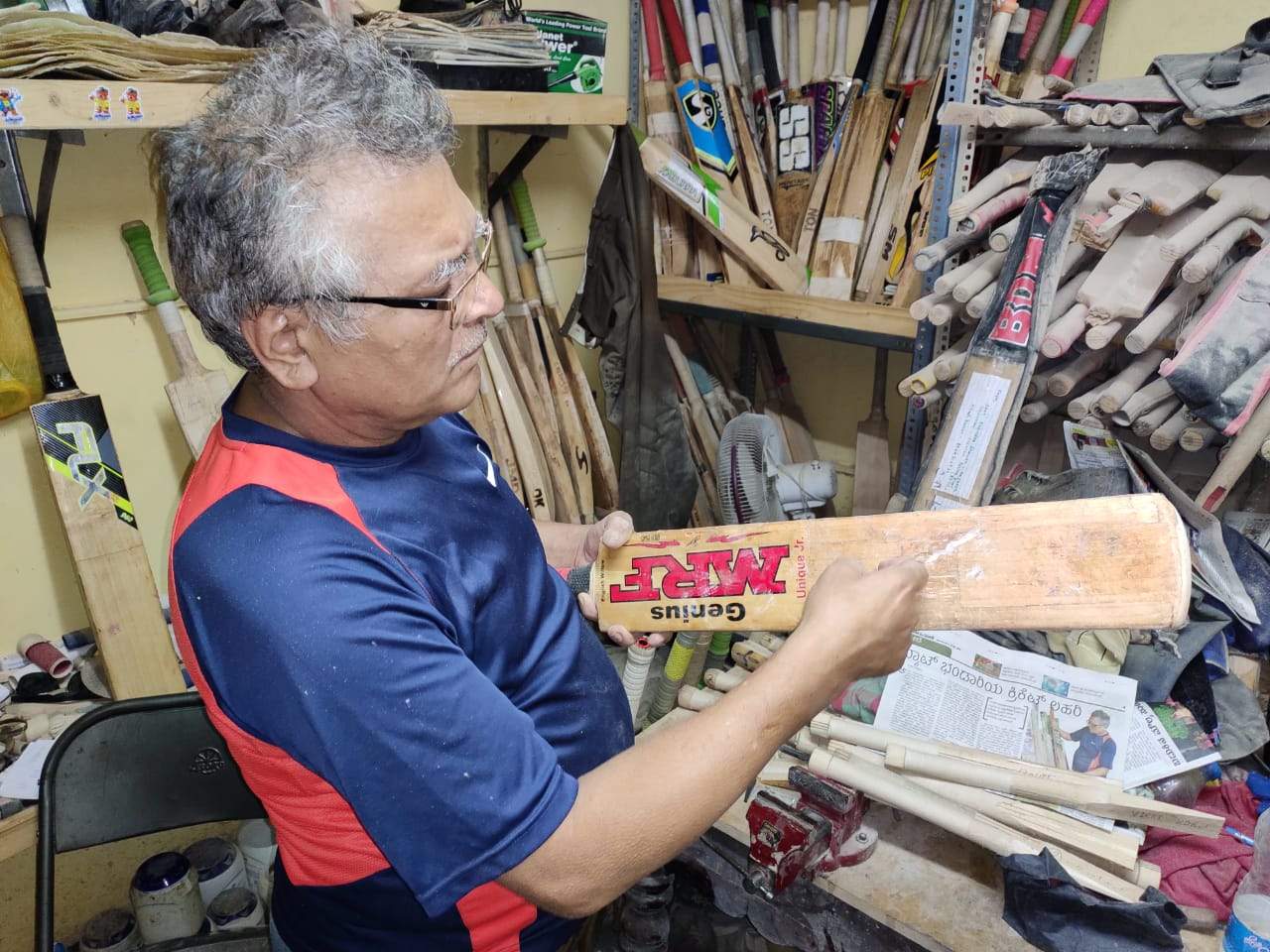 Expert bat maker: Ram Bhandari is an expert and he can tell you easily the kind of wood used in making a bat

Not for Ram, Even after working with international cricketers like Travis Head and the legendary Brian Lara, the now 60-year-old man charges only Rs 800 for changing the handle of the bat and Rs 500 for balancing, threading and pressing a bat. "Initially when I started the business, I used to do it with a knife and other smaller instruments. Now, I do it with the help of machines. I don't earn much out of this business but I do it for the love of cricket," says Ram whose sons Dasharath and Narendra are also cricket players. Narendra has played for the Bangalore University cricket team and a few other cricket clubs. Dasharath plays for Magadi Cricket Club and helps his father in repairing bats at their workshop.