It turns out that there is a word for that power that mothers have that helps them lift entire trucks off of their trapped babies. It’s called hysterical strength. If you knew the story that I know, you’d be perfectly okay if I replaced it with the name ‘Raina’. I also hope that knowing this story will shift the lens we look at the world through. Maybe we can learn to grab at life the way Raina has learnt to.

Raina A comes from the Pullur-Periya panchayat of Pukkalam, Kasargod. Her life changed at the age of 16, when she was married off by her family. “I wasn’t forced into marriage or anything, but I wasn’t old enough to decide for myself either. I didn’t have the education or experience to know what was best for myself at the time,” she says, “My life started to become surrounded by tragedy the moment I got married. My husband did not have a steady job or any means to support a family. I awoke to the responsibilities of taking care of a family before I was even old enough to know what they were.” 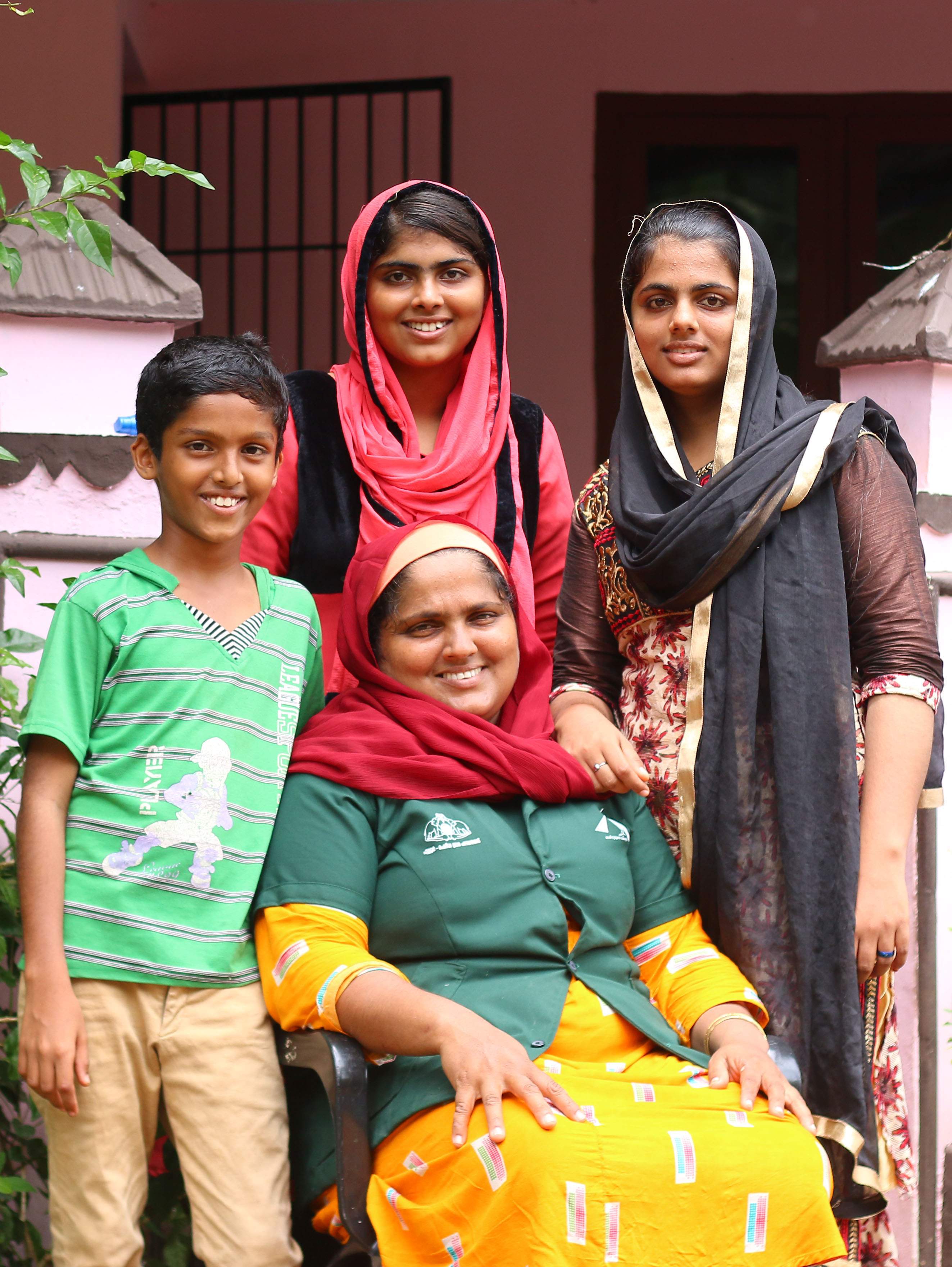 FAMILY MATTERS: Raina along with her three children

After teaching herself to stitch, Raina began to support the two of them through a number of odd jobs and by registering herself for the Employment Guarantee Scheme at the local unions. Being an eighth standard pass out, she admits that she was not mature enough to take on so much work at her young age. She says, “When I had my first child, I realised that times were going to become even more trying, but I was determined to do the right thing. I just kept putting the work in. I knew who I had to do it for and why I had to do it and that kept me going. By the time I had my third child, any kind of work came easily to me.”

Once she became a familiar face in her neighbourhood, Raina started to receive work from the Kudumbashree. For five years, she worked with the organisation and performed any odd job that she was able to. The organisation had been working quite elaborately in her area at the time. On one occasion, Raina was asked if she would be able to participate in a waste collection programme.  Raina confidently says, “It was not about what I was good at, I could do anything I set my mind to. It was just a matter of being resolute enough and knowing where I needed to reach.” 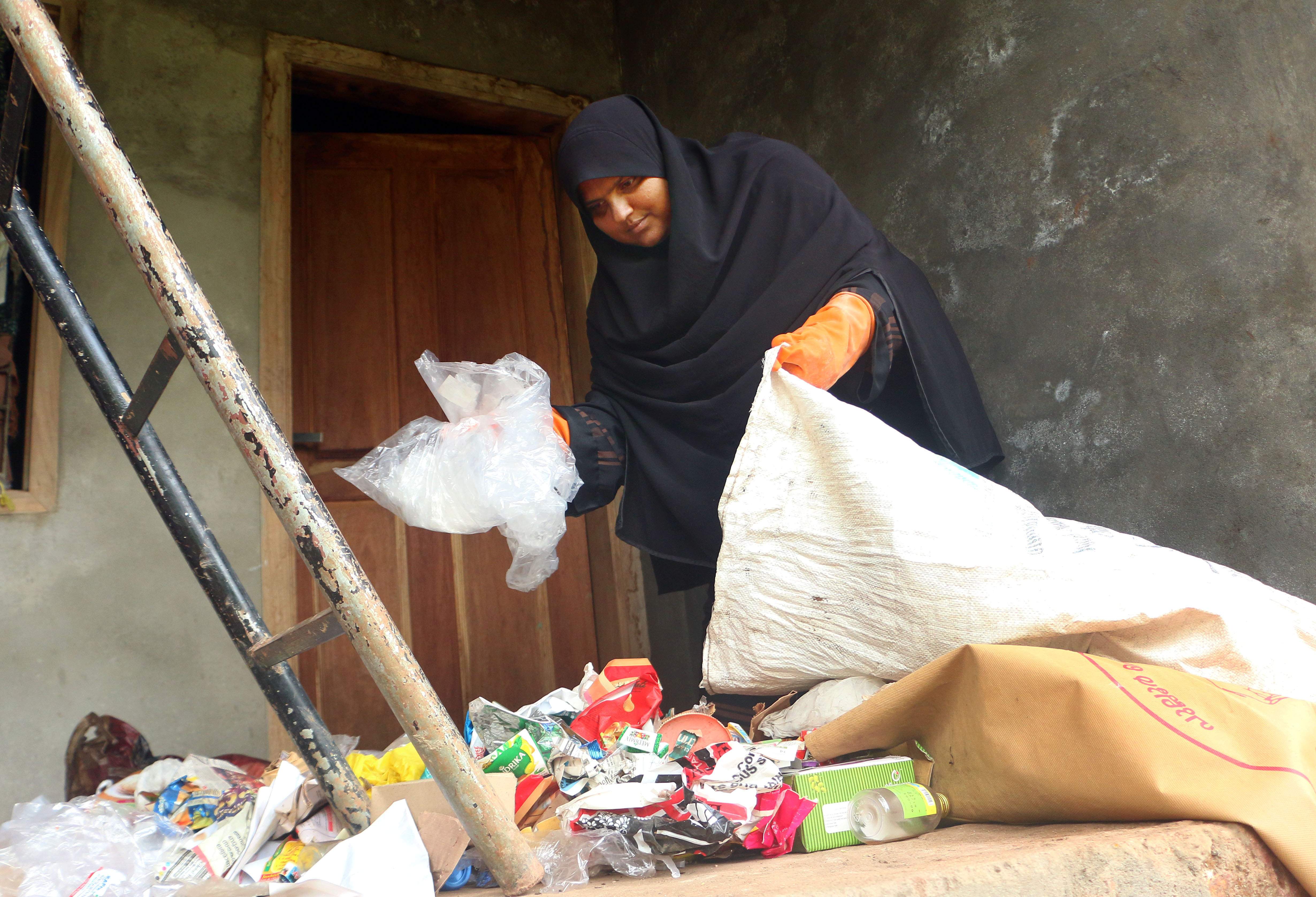 WASTE NOT: Raina's efforts have also helped clean up her village

She began collecting waste from around her ward. Initially, the waste collection programme was intended to have two people collect waste from 550 odd homes. However, the programme was not able to sustain itself and had to be shelved. However, Raina’s trademark determination had already ensured that she was doing the job of two people effortlessly. She currently collects waste from these 550 homes. People from these particular households contact her on her personal number as soon as their waste begins to pile up. On being notified, she goes around on her bike to where they live and collects the waste. “I collect the waste regardless of the time. Even if one of these people call me after 5 or 6 in the evening, I will turn up.”

Completely wonderstruck by her story, I can’t help but ask a question Raina can’t seem to comprehend. “How am I able to do this? I do it because of the pain I had to go through in my life. I know that I had to fight difficulty after difficulty to get myself and my family where we are. So even if something comes out of nowhere and we are unable to handle it, I just think, 'How much worse could it be?' I’ve had to deal with the worst. I had to go to whatever lengths that life took me in the name of my family. So if I have to answer in one go, I’ll have to say that I learnt to do things, regardless of how difficult, because of the paths my life has taken me through.” 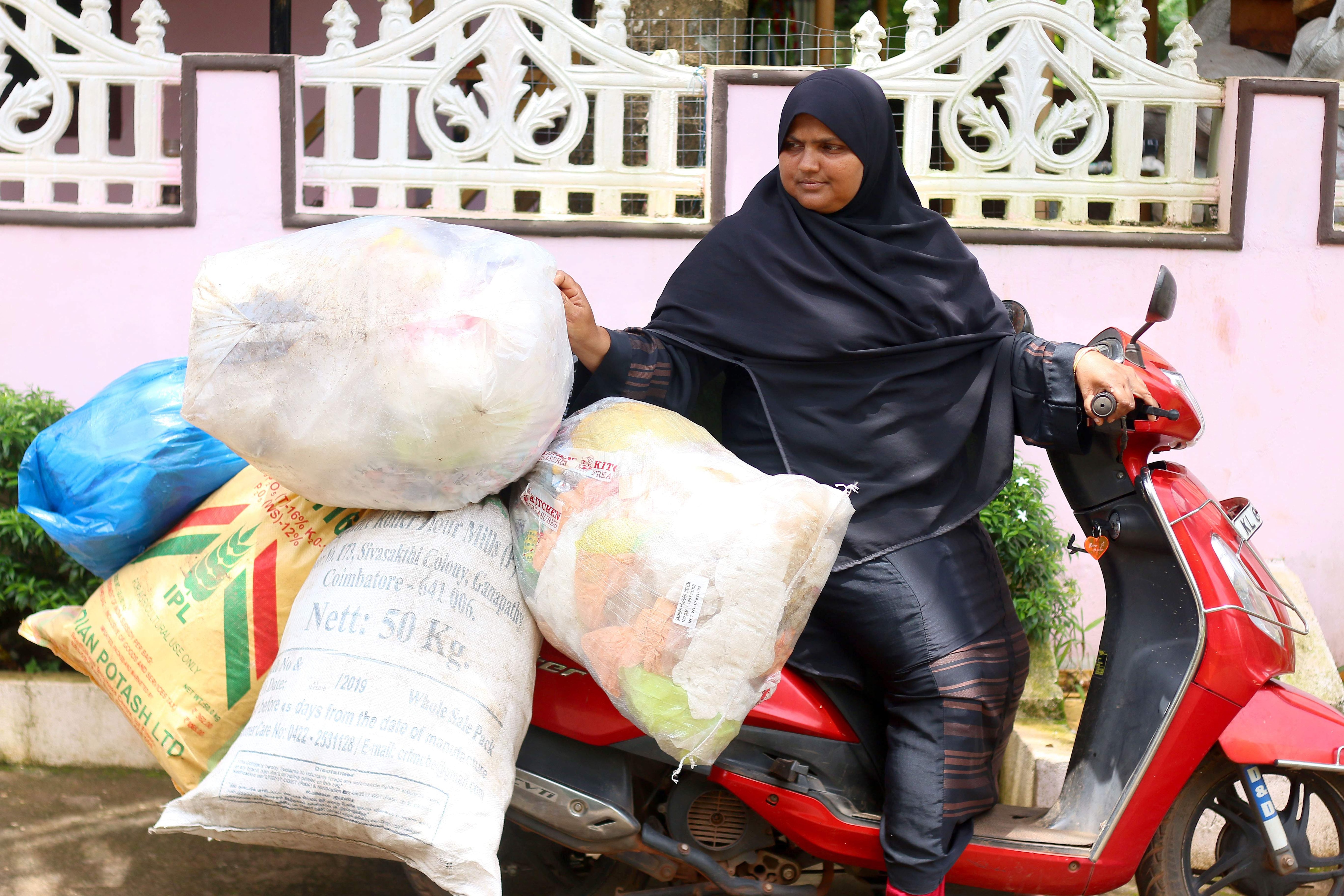 RIDE ALONG: Raina makes the collections on her scooter

But Raina doesn’t stop there. In these dark times, she’s also found that her personal waste management service has the potential to change the way we take care of our environment. She says, “I’m cleaning up the places around me. I think we all know how important it is to keep the environment clean. If I am able to be of service to people through my own actions and help make the environment cleaner, why wouldn’t I take that up? I consider that an opportunity for myself as well! If you visit our neighbourhood right now, you won’t find a single piece of plastic in any of our houses! That’s how clean we’ve managed to keep this place.”

I wonder if Raina realises that she is building quite the legacy for herself. Regardless, I feel the need to ask for some life advice. She answers, “It is not necessary that everyone receives the opportunity to pursue their education. From what I’ve learnt so far, women need to be prepared to take on any job that they are faced with. When the going gets tough, we can only trust our own instincts.”

And she’s built a home with this special brand of resilience. She says, “My daughters will never live the kind of life that I have had to. Every bit I have earned so far is entirely for them, nothing else matters at this moment.” Let’s go back to hysterical strength or whatever magic it is that Raina is built of, let’s hope that there’s enough of it to spread around.