At the tender age of 5, Ayan Gogoi Gohain from Assam is a painter, a photographer, and a published author. The article follows Ayan's journey towards publishing his book Honeycomb, his interests, his

A chirpy, boyish voice was not what I expected when I dialled Sangeeta Gogoi. The voice did not match the description I’d received earlier of Sangeeta’s son, Ayan Gogoi Gohain. I had been warned of 5-year-old Ayan’s introvertedness the first time I’d spoken to Sangeeta, and was unsuccessful in getting Ayan to speak with me, because Doraemon, his latest obsession, was on TV. Imagining him to be soft-spoken, I was surprised to get a bubbly ‘Hello?’ Remembering that football is one of the interests we share in common, I tried to ask him which his favourite team was. But a greeting and an identity confirmation seemed to drain Ayan’s interest towards any further social interaction. So far, Ayan was proving to be an introvert in every sense of the word. An apologetic Sangeeta picked up the phone after a minute of silence and spoke to me on Ayan’s behalf. She told me about the journey of how this prodigy came to publish his book, Honeycomb. 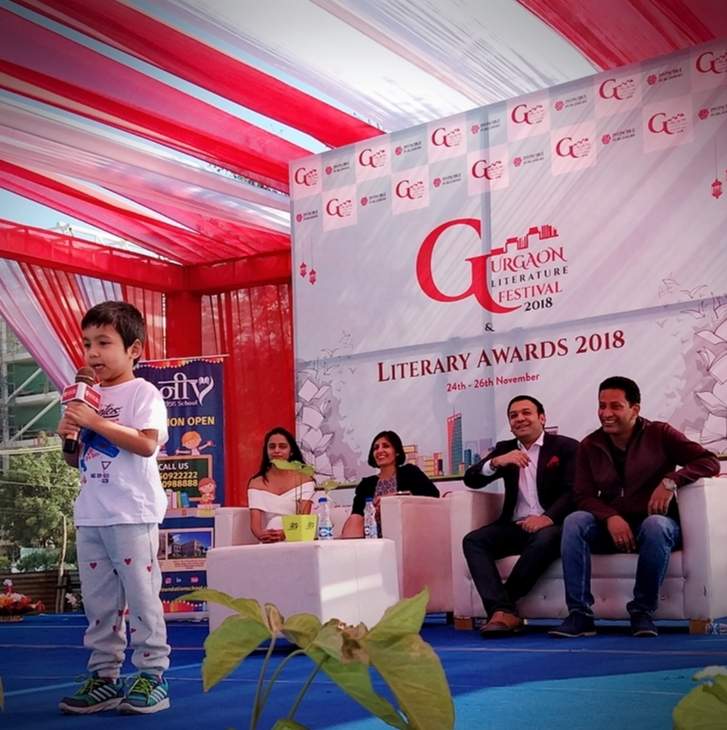 Ayan is lit: Ayan was invited to the Gurgaon Literature Festival 2018 for being the youngest author in India.

How Ayan became the youngest author

Ayan, who used to spend most of his time with his grandparents, had to move to Mizoram with his parents at the age of 3. Sangeeta recalled, “He started missing his grandparents so much. So then every day, whatever he experienced in the house or wherever we travelled, he recorded everything and used to send it to his grandfather.” Through a voice-to-text app, Ayan shared his tales. One day, his grandfather told his mother of how all his messages collectively seemed to read like an endearing story. This marked the beginning of the journey towards publishing Honeycomb.

When Sangeeta gave Ayan an alphabet book to take to school, he refused it saying that he would take his own book – a book with his own words – to study from. Ayan was told that he could write a book when he’s an adult and that he’d have to make do with school books till then, but Ayan stood firm in his decision. Sangeeta then compiled all the messages she could find, which totalled to 30 anecdotes. Ayan then drew his own illustrations for Honeycomb, and Sangeeta sent them to a few publishers. “The publishers liked Honeycomb and said that it was nice, but they were telling us to put it up on a blog. So Ayan was very upset,” Sangeeta recalled. But Ayan was still fixed on the fact that he wanted Honeycomb to be published as a book. So Sangeeta sent the anecdotes to Authorspress Publishers in New Delhi, and they not only agreed to publish the work, but also got the book printed much faster than the Gogoi Gohain family had expected.

This marked the beginning of a new chapter in Ayan’s life. At the age of 4, he was certified as the youngest author in India on January 6, 2018, by The India Book of Records. Regarding Ayan’s nomination for The India Book of Records, Sangeeta mentioned, “I really fear the limelight. So I resisted, but people have their own way. Somebody nominated, and they certified him.” Prone to being reserved, Ayan withdrew into his shell when he began receiving attention from the media. He did not like seeing himself on television or in the papers. Seeing what recognition on the national level did to him, Sangeeta did not have it in her to accept when Ayan was nominated for the Guinness Book of World Records for being the youngest author in the world.

Little Shakespeare: The cover page of the book that made Ayan Gogoi Gohain the youngest author in the country.

Ayan has been invited as a guest speaker at literary summits in various places like Delhi, Dehradun, Haryana, Assam and Mizoram. He was also invited to speak at India Global Summit 2018, where he said, “This is what I love to do – make people happy, meet new people, to see this big, big world, and make the world one with love. I want to save animals and birds and set them free. I want to plant lots and lots of trees around the world, to write more books, organise more art exhibitions. I want to work with great writers, directors, actors, and want to work in great films and send out a great message like Forrest Gump, Pursuit of Happyness and Taare Zameen Par. I want to make my own movies to inspire. I want to use all the money I get from my work to make the world better and better.”

Ayan loves to care for nature, and he adores animals and birds. He hates seeing them caged, and dreams of setting them all free. His love for animals is what inspired him to write his second book, Antariksh, meaning ‘outer space’. It is about Laika, the dog that was sent to space. “Ayan was very angry and upset when he heard that NASA sent Laika into space and that she never came back,” says Sangeeta. This moved him to write a story about how Laika is still alive and stuck in space. 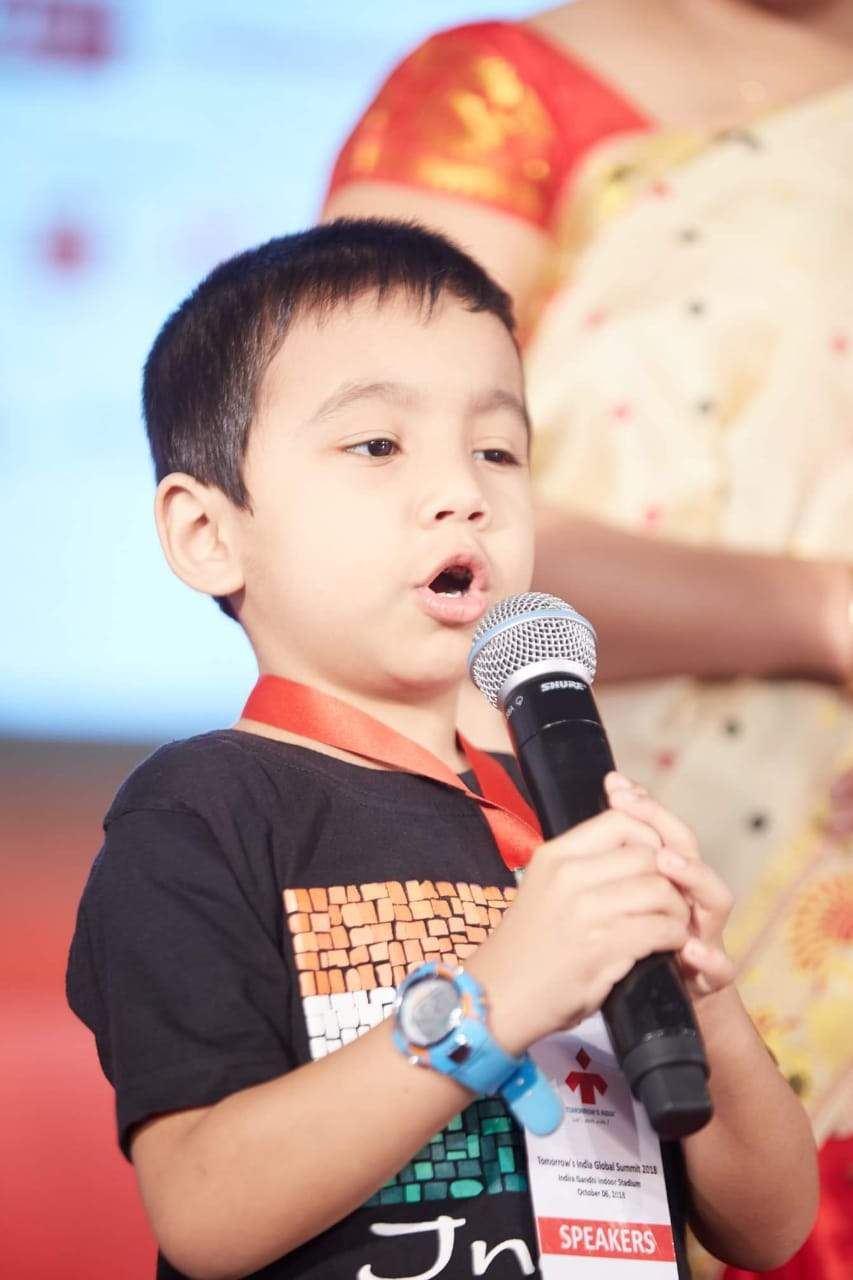 From the mouth of the babes: Ayan, invited as a guest speaker, at a literary summit.

How Ayan is helping change the world

“Ayan initially said he wants to become a farmer, but it keeps changing,” says Sangeeta. His mind keeps jumping from one interest to the other, like wanting to become an astronaut, and then a pilot. Ayan also bakes, loves photography, does yoga, draws, paints, has made an animation video ‘Planted Dreams’. But through it all, Ayan’s hunger to make the world a better place has not died down. Ayan continues to contribute to making changes however he can. He prefers giving out Honeycomb for free, and tells the buyers to plant trees wherever possible. All the proceeds received from the book have been used to plant more trees, including places outside India. “You will find that he carries seeds in his pocket wherever he goes,” said Sangeeta. Ayan has gifted paintings to orphanages, and has also promised to donate two paintings to a restaurant. 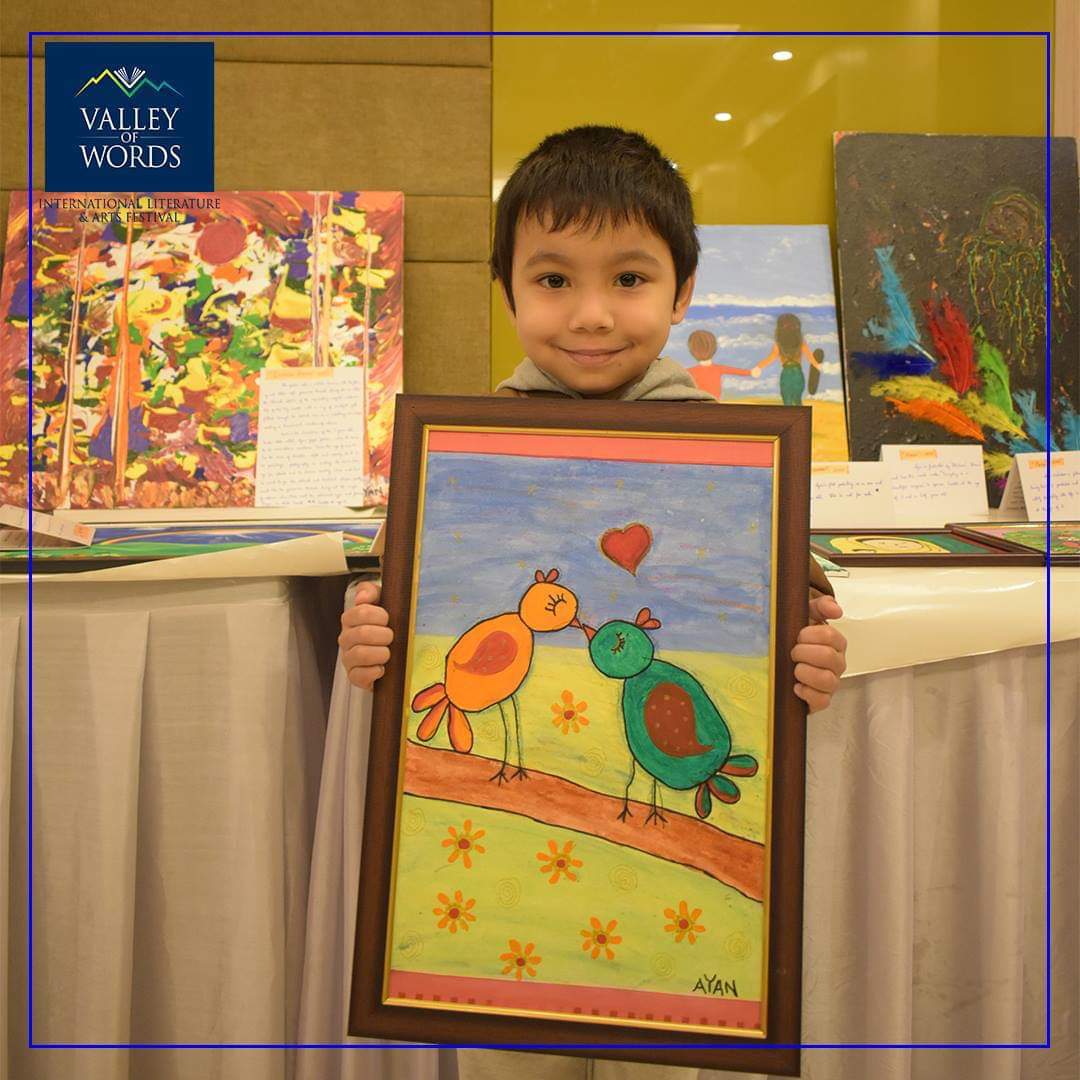 Art lover: Apart from writing, Ayan also paints and has had exhibitions to showcase his paintings.

He began drawing and painting at the age of one. “He would just lock himself up in his room – sometimes till 2 or 3am, you won’t believe, and just keep painting,” Sangeeta said. His first drawing was of a woman and a child. Ayan later clarified that it was meant to be a picture of him with his grandmother. Ayan says that he never wants this painting of his to be sold, even if the others are. Ayan’s paintings have been exhibited in various places in India. At VOW 2018 in Dehradun, Ayan exhibited his paintings titled ‘Gossamer Dreams’. Students at Ayan’s school, St. Mary's High School, North Lakhimpur, Assam, are also generally good at art. The Principal encourages the students to draw and paint, and exhibits their art work for people to see. According to Sangeeta, “They are great at art. I’ve seen their drawings. Most of them are good with wax crayons, but Ayan is good only with acrylic paint.”

Ayan reminds us that we can achieve great things if we stop restricting ourselves. He inspires by doing things, not for recognition, but because he genuinely aspires to make the world a better place. We may not be authors, or painters, or revolutionaries. But if each person does what they can to make a change, we can come together and achieve what those like Ayan aim to do. So, as Ayan once said, “Let’s clap our wings of imagination and ideas. Let’s fly free and high. Let’s come together and sweeten lives with our honeycombs.”