Meet Venkappa Nayak, a cyclist from K'taka, who is cycling hard to make it to 2024 Olympics

Amidst the financial difficulties, Cyclist Venkappa Nayak representing the country at the highest stages in the Junior level has brought many laurels to the nation, family, and friends. He is currently undergoing training at Indian Sports Academy in New Delhi. He is a resident of Tulsigeri village near Bagalkot and studying in the 12th grade at BLDE's PU College in Jamkhandi. With his stunning performances at the national and state level competitions he along with booking a place in the Junior Indian Cycling team and selected for the Indian Sports Academy of New Delhi. He elucidated his sports journey in an interview with The New Indian Express.

What fascinated you towards cycling?

Twin districts Vijayapura and Bagalkot are popularly known as the 'Mecca of Indian Cycling' and has produced thousands of cyclists. I grew up watching the national and state level cycling competitions that used to be held in both the districts. It influenced me and I decided to take up a career in cycling. With God's grace I got selected for a government sports schools when I was in class 4 and since then I got connected with this sport.

How was a journey from a small village Tulsigeri to New Delhi?

It was amazing, I have never imagined that I would be representing the country in this sport. But with my efforts, dedication, and support of the coach, I am performing better at the international stages. I was blessed to get good coaches at the sub-junior level at the Government Sports School in Bagalkot. I performed well at the state-level tournaments and won many medals. It got me a place in the state team and I repeated the same performance at the national level tournaments and got selected for the Indian Sports Academy. I am excited about my future journey in this sport.

Does the financial condition of your family affect your game?

No, in fact, my poor family condition helped me to perform better at the big games. As I am being trained in the nation's top sports training academy under the government sponsorship I have never faced any hardships. I thank my coaches and the government for encouraging rural talents.

How was your journey with Junior Indian Cycling Team?

It was remarkable. I am the only and the first cyclist from Karnataka to take part in the Junior Cycling World Champions that held in Switzerland but ended up finishing in top ten. Thereafter, I improved and worked on my techniques and performed well in the Junior Asian Games Delhi and won Bronze Medal. And won Silver and Bronze in Junior Cycling Asian Championship in Jakarta of Indonesia. I got the opportunity to meet other national athletes and interact with them. Importantly I got good coaches who always boosts my confidence and encourages for better performance. 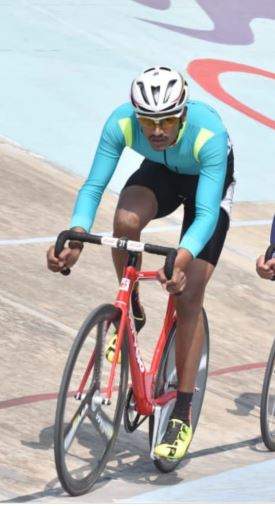 Cycling away to glory: Venkappa Nayak has represented the country at the highest stages in the Junior level and has brought many laurels to the nation

Which moment was the game changer in your sports life?

The moment I got selected for the Indian Sports Traning Academy was the game changer. I got good facilities, highly educated coaches and hi-tech cycles to perform better in the competitions. Along with selecting to the national academy I also got an opportunity to represent the country at international competitions.

What has kept you going?

The only thing that has kept me going is to be a part of the team that brings the name to the nation at the international stages. Winning medals at the international stages are the biggest boost we ever receive. The unconditional support of coach, family, and villagers is the other thing that is motivating me to perform better in the competitions.

What are your future plans?

I took part in the five international events at junior levels and won medals in four events. I am happy that I have ended junior level in a good note. Now, I am undergoing training for the senior category and tournaments will kick-off only in 2020. I am aiming for the spot in the Indian Cycling team and to compete in Olympics 2024.