Kokila Bhattacharya works best with ideas and colours. Here's how her fascination with creating meaningful art began and how it has grown to help her comment on contemporary social issues

Kokila Bhattacharya is a 25-year-old feminist from Bhopal, Madhya Pradesh whose work resonates with a deep sense of curiosity which she has known since she was a child. This general outlook to life found its way into the socio-cultural and political world around her. She says, "I create art and work with many organisations, some of which are my own. The idea is to create change in whatever small ways I can." She currently runs Dylogg Coworking in Bhopal with her partner and they have created a community space for the arts, progressive dialogue and a culture of sharing. The spaces that Kokila likes to work in and create are all about thoughts, poetry, films, music and ideology. We spoke to her about the intricate art world that she has built around herself.

Could you tell us about how you first came to indulge in art?

As an introverted, overly imaginative child my only window to express would be my art. My family is one of the architects and artists so I am privileged to have been nurtured in that atmosphere where one’s artistic pursuit and skills, the critique can be honed. Later I joined the National Institute of Design, and even though I dropped out midway, my foundational understanding of ‘why’ design matters and ‘for whom’ are clear in my conscience. This art is not limited to a visual piece, it harnesses itself through dance, music, poetry, the ways in which we critically and instinctively analyse and perceive the world around us. I sense certain things so intently I feel incapacitated to so art is more of a synapse than a conscious effort, can’t help it!

What is your personal style and which are the themes that you like to focus on?

I usually work with watercolours, ink and pencils. I’m inclined towards traditional forms of drafting ideas but use digital software to execute the illustration alongside a pen tablet. My style seems to vary depending on the context, requirement, my own limited set of skills and sheer mood. I’m deeply moved by the idea of illustrating music, poetry and even dance, basically a sense of rhythm. For the past several years my art illustrates many many women, the LGBTQ community and even child rights, depiction in both fierceness and compassion, resistance and solidarity.

Your illustrations seem to be honest and make a point to critique societal norms. Is this a reflection of your own thought process?

Yes. Since I could never find solace or comfort in straitjacket thinking and have found it hard to live a life that was ‘expected’ of me. I just wish the world to be a safe space for everyone to be themselves without the violence and judgement but since that is far from reality, critique becomes the last resort to survive and assert ourselves, especially as South Asian women. When I started to feel hurt about Climate Change and how helpless I felt I started reading and connecting with people and movements. This network of changemakers changes me every day and helps me editorialise my art into context. 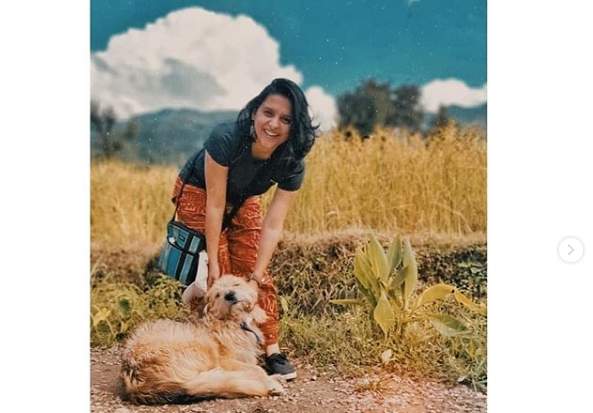 Is there a routine you follow when you work on a particular illustration?

For personal vent outs, which often is a coping mechanism of my personal issues, mental health or political angst, the process of drawing itself becomes therapeutic so I let the hand take over. For clients and freelance work, I get deeply and personally involved in their vision, for whom the project is and what it represents. A first-thought draft is sketched, is proofread, gotten feedback from, a few alternatives are considered and voila! Something new!

What are the issues you most identify with as an activist? Could you elaborate about the work you've done thus far?

Corporate crime and resentment of capitalism, which the Bhopal Gas Disaster is a by-product of is an issue I’ve been involved with since school. I run a small project called Adolescent Voices where we are trying to document and amplify voices of children in Madhya Pradesh. In 2017 we organised the first LGBTQ+ Pride Week in Central India. I’ve organised protests, talks and curate social media as one of the fantastic feminists who run the collective called #IWillGoOut pan India and have also coordinated One Billion Rising India. The intersection of gender, sex, sexuality, class, caste and other identities. The interconnection of these issues is often overlooked but if one connects the dots, work on any one issue cannot be isolated from the other.

How does your sense of art and activism collide?

When we read history in school I asked, how did we know all this? Through anecdotes, through memoirs, letters and well, art! It makes me feel that artists merely respond to the atmosphere they are witnessing. This becomes first-hand preservation of the present that is otherwise suppressed in the mainstream. I now feel a sense of responsibility, towards my own self, to respond sensibly, to speak up, build solidarity, evoke a sense of empathy or even, remind everyone that they are enough. I am stirred, moved and broken by all art forms so I wish for everyone to feel this intensely.

Are there any upcoming projects that you are excited about?

The YP Foundation is set to release a publication marking one year of the Section 377 judgement, I’m excited to design it. Some of my new work on Child rights with UNICEF Madhya Pradesh is also in the pipeline and we hope it helps children be stronger advocates for their issues. I’ve finally decided to publish my personal project ‘Eyes Wide Shut’, an illustrated zine about the aftermath of the Bhopal Disaster at my own cost this December, (the 35th anniversary of the disaster). A new zine will be at display at the Gaysi Zine Bazaar this September, titled “Queering the Anthropocene”. I’m illustrating my partner’s debut album artwork “Zidein” to be released next month.