An actor, writer and director, Sunandha believes that theatre in India is dominated by male representation that ignores the 'other' and wants to create a culture of feminist expression to counter it

All over the world, theatre has always been the medium used to deliver commentary on social, political and national issues; acting as a mirror of society, much like literature. It has pretty much enacted the same role in India, excepting the fact that the female voice is given neither visibility nor appreciation, says Sunandha Raghunathan, an actor, writer and director who has been flourishing in Chennai's theatre scene for over 14 years now. Some of her memorable roles include Jocasta in Seneca’s Oedipus, produced by Theatre Nisha, Kripi in When Things Fall Apart by JustUs Repertory,  Paulina in Death & The Maiden by Stagefright Productions and Vera Claythorne in And Then There Were None by Crea-Shakthi among others.

“Theatre in India is generally a boy's club. Even though there are excellent women writers, performers and directors, the 'superstar' names in the limelight will be those of men because the women don't get the press,” says Sunandha, a Charles Wallace scholar who recently graduated with a Master’s Degree in Text and Performance from RADA and Birkbeck College, adding, “This is very similar to the comedy circuit, where all the famous superstar comics are mostly all men. This is not because women are not funny, they are perceived to be 'not funny enough'.”

Sunandha's strong opinions are rooted in personal experience. “A couple of years ago, I had acted in a play directed by a woman, which also featured another female actor. In the review given by a journalist, who ironically also happened to be a woman, there was no mention any of our names. A performance will only be immortalised if something is written about it. In doing so, why are female artistes not given their due?” she asks. This outrage, combined with the  need to create a space that allowed the female experience and a female presence onstage as its own end and not as a means to say something else, was what led to form her own theatre group, Guduguduppukkari, with Anitha Santhanam, a two-time awardee of the Charles Wallace India Trust Award (2007, 2012) whose work spans performance, direction and therapy with a special focus on physical and devised theatre based on the pedagogy of Jacques Lecoq. “We actually didn’t know each other and she was suggested to me as a director who’ll be great to work on Mundhirikkotte, a play I wrote as part of The Royal Court’s International Writers Programme. Anitha lives in Bengaluru and I live in Chennai. She came over so she and I could drive to Pondicherry and past that to Parangipettai so I could show her the place where Mundhirikkotte was set. On that car journey, we talked about how we each got into theatre and what we like about it and what we wish we could change and so on Guduguduppukkari was born from that conversation. Our goal, though lofty, has always been about destabilising patriarchy and a lot of our work seems to challenge patriarchy,” she shares. 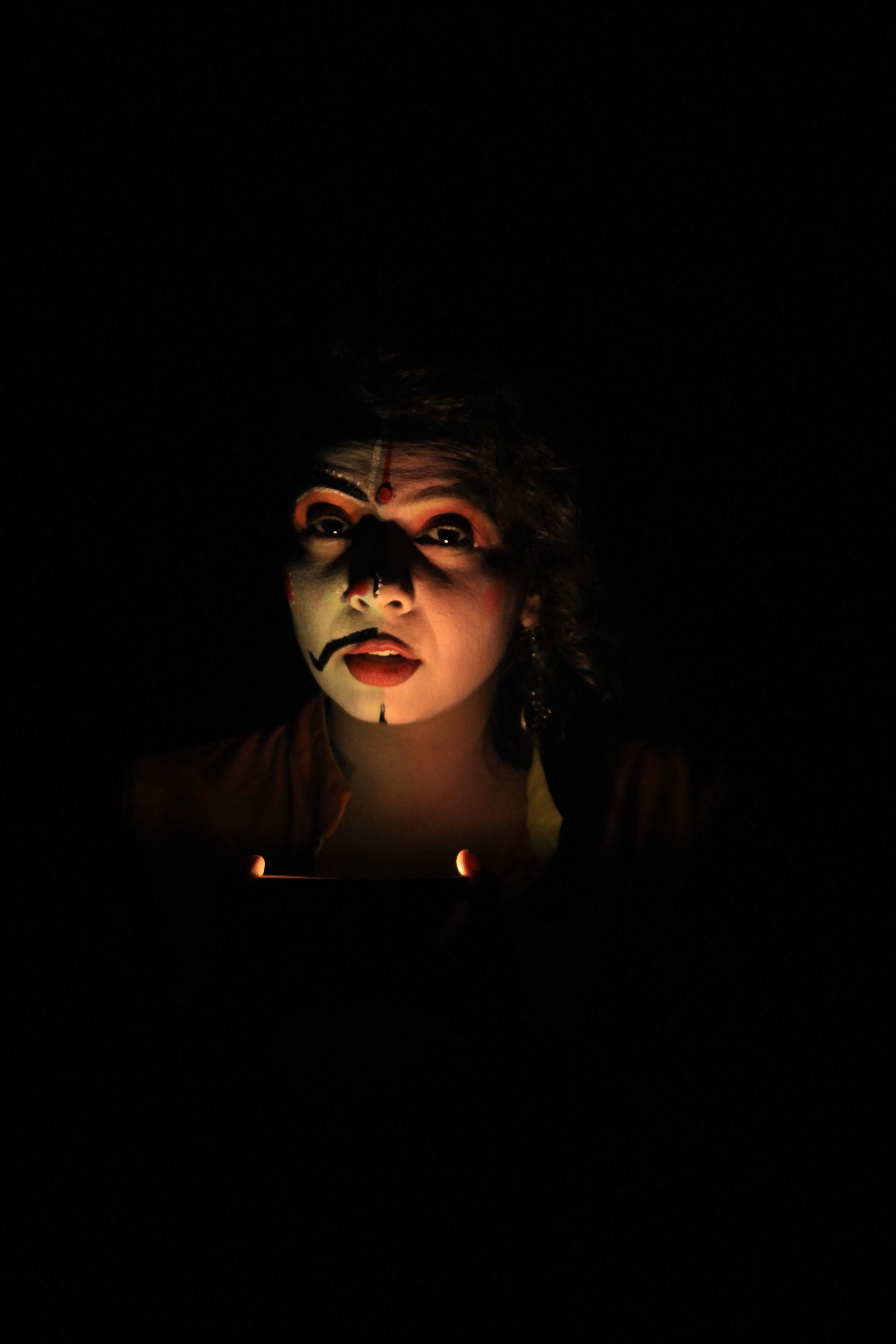 Sunandha 's play Bad Hindu revolves around examining conflicting identities within herself through the story of Aravan, a character in the Mahabharata using a mix of storytelling and kattai koothu

Though she may be vocal about her ideas and believes that the times that we live in make you question the idea of majoritarianism, she does not call herself an activist or brand her form of theatre as 'activist theatre'. “I take issue with certain things that I believe are not 'right' per se but I am not going to hold placards and protest outside the parliament because of that. My work - when I go up on stage and perform - is itself an act of defiance. Also, when you call yourself an activist, it means that you are aligning yourself with either right or wrong. But as an artiste, I do not think it is my job to do that. The play also loses its complexity completely,” Sunandha avers, pointing out that her play Mundhirikkotte, which premiered in Mumbai in 2016, also examined the concept of 'might is right.

Is the Chennai audience welcoming or at least receptive to her subversive art? “Yes and no”, she says. ”There are some people who only want to watch short plays and laugh at bad jokes instead of watching a full-fledged one-and-a-half-hour play. But there are others who like watching complex stuff on Netflix and will also enjoy my plays.”

Sunandha, who has conducted theatre workshops for corporates, schools and colleges with Theatre Nisha in the past, is coming up with a foundational acting workshop,  Enter Character Exit You, on how to build a character from the ground up based on various methodologies she has been exposed to as an actor, writer and director in the time she spent at RADA, working with playwrights from The Royal Court, and her residency at the Lincoln Center Theater in New York this year.