This techie from Chennai just did a 12,000 km ride spanning three countries on his 20-year-old RX 135

Ram Gopalakrishnan, a software professional in Chennai, is an avid travel freak, who just completed 12,000 km across three countries — Nepal, Bhutan and Myanmar — over a span of 73 days

There are fancy ways to see the world but for some, like this 24-year-old from Chennai, your basic all-inclusive travel package with an upmarket resort just won’t cut it. For Ram Gopalakrishnan, it is more about the independence in travelling solo, about self-discovery and not just taking Instagram-worthy selfies. And spending some more time with his retro two-stroke Yamaha is an added bonus. Ram says he likes challenging himself and doing things out of his comfort zone as the experience is generally unpredictable and unknown. 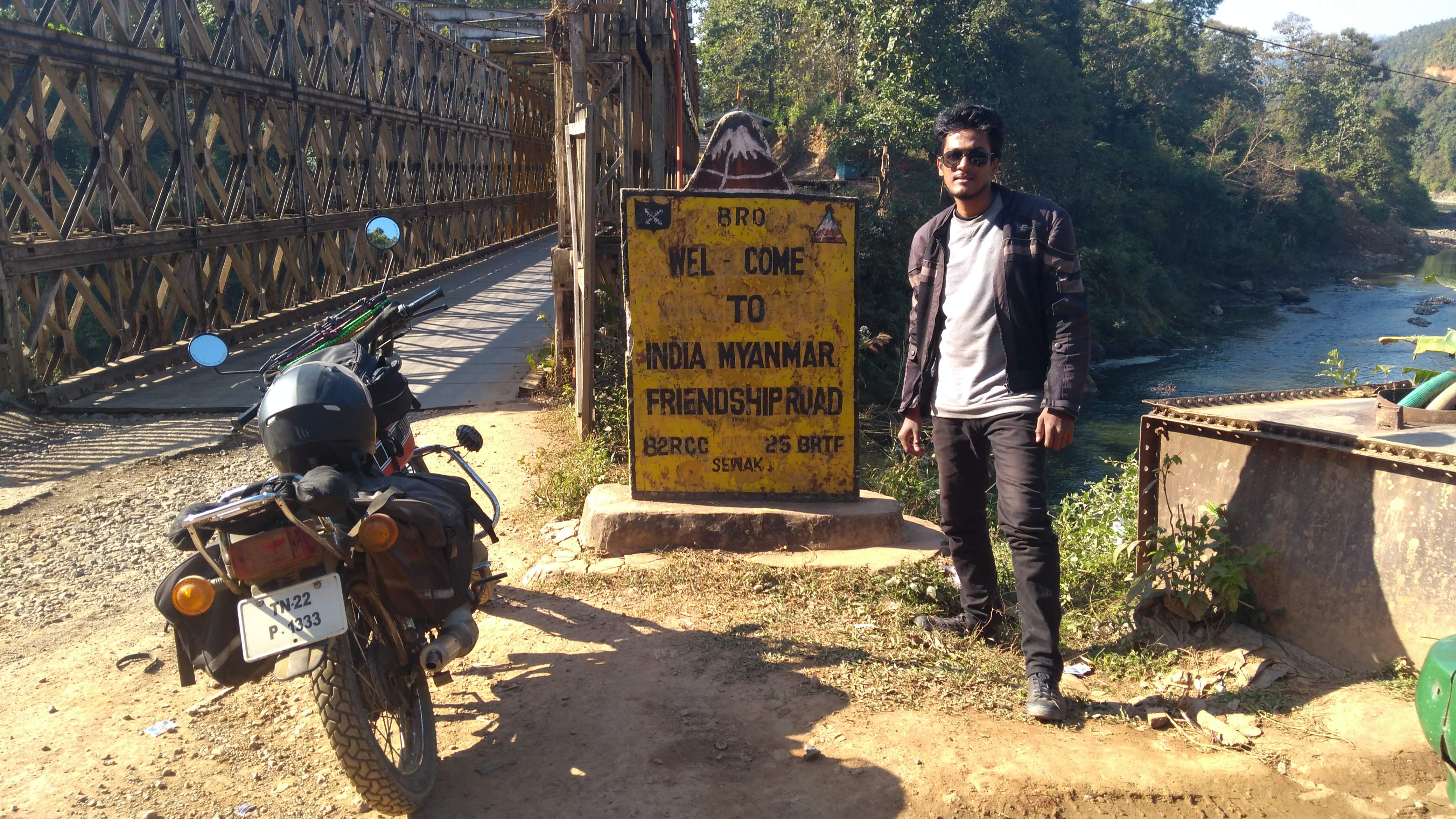 Help on the way: Ram happened to meet a Tamil community in Moreh, near Myanmar border who hosted him for a couple of days

Ram, a software professional by day and rockstar by night, based in Chennai, is an avid travel freak who just completed 12,000 km across three countries — Nepal, Bhutan and Myanmar — over a span of 73 days. And how did he do that? On his 20-year-old Yamaha RX 135 two-stroke motorbike. You must be thinking that this guy is crazy, but he had it all under control. "This is not my first journey. I love travelling, especially by bike, as it gives me a sense of independence. It enables me to go wherever I want to go and helps me be less dependent on other people. Travelling on your own gives you the freedom to explore places less travelled to. I like to ride motorcycles, especially two-stroke ones. I feel they are a different class of motorcycles – the thrill of riding them is completely out of the world," says an ecstatic Ram, as this is the first time he's sharing his experiences with a newspaper. Roadtrippin' on my RX

Ram's epic journey began with a single kick (or seven, if you know your Yamahas) "In 2017, I went from Chennai to Kanyakumari and then to Delhi in 30 days. This was my second-longest road trip," he adds. He began the 12000 km-trip in mid-November last year and completed it by January this year. "Half of the trip was planned in advance — I had plans for only the first 30 days. But then, I extended it by another one and a half months. This was completely unplanned as I wasn't really clear about the places I would visit or where I would be staying. After the 30 days were over, I began to decide where to go next only the following day," he explains. All bikers gather here: Ram with one of his friends who helped him get the bike ready for this trip

But why bike? And why bike on such an old bike? These are questions that prompt us to go back in time. His love for bikes began when he was a child. However, the Yamaha RX 135 is the first-ever bike he owned. He bought it in the year 2013, by which time it was 20-years-old and had two previous owners. Isn't he worried it will keep breaking down? He says that he makes sure to maintain his bike well, "I only use it occasionally to go around the city. It is typically used for long distance rides out of town. Because it's old, I have to maintain it well and service it on a regular basis. I attend to the mechanical issues myself, as I have to know the basics when travelling alone. This way, if things go wrong I will know how to fix it. I carry all of the essentials with me when travelling," he explains. 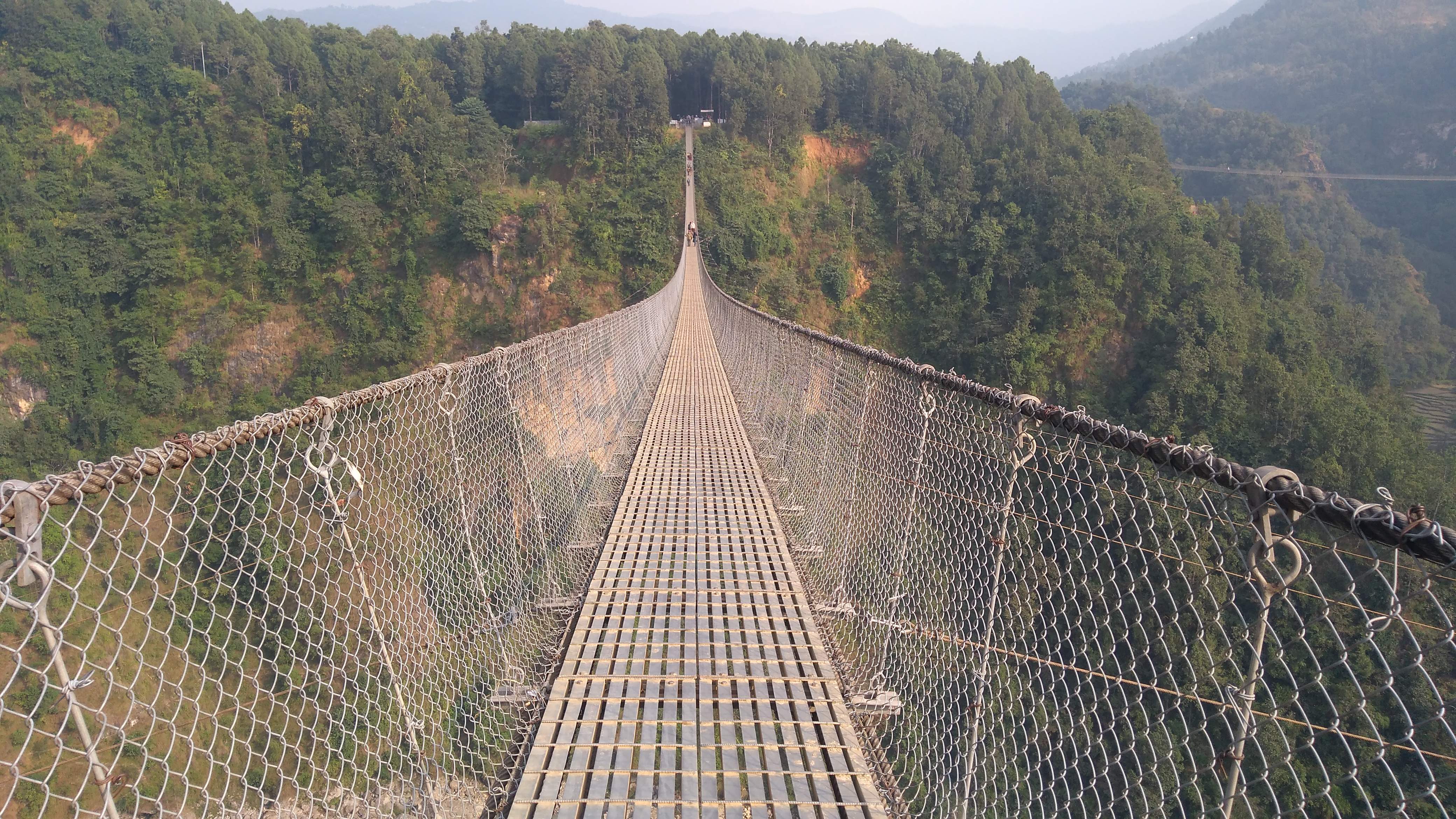 Once in a lifetime experience: Taking my bike on one of the tallest and longest wobbly suspension bridges in Nepal, Ram says, was one of his best experiences

So how did he navigate through unknown terrains? "I used Google Maps excessively. And when that failed, the locals were always ready to help. Navigation was not much of a problem," Ram says. But since he was depending on technology, how did he keep his phone battery charged? To this, he replies, "I actually use a phone that has an impressive battery capacity. I use power banks as well. If that also runs out, I have other ways to charge my phone through my motorbike. That was the kind of backup I had. However, I luckily didn't run out of charge and the power banks were enough." 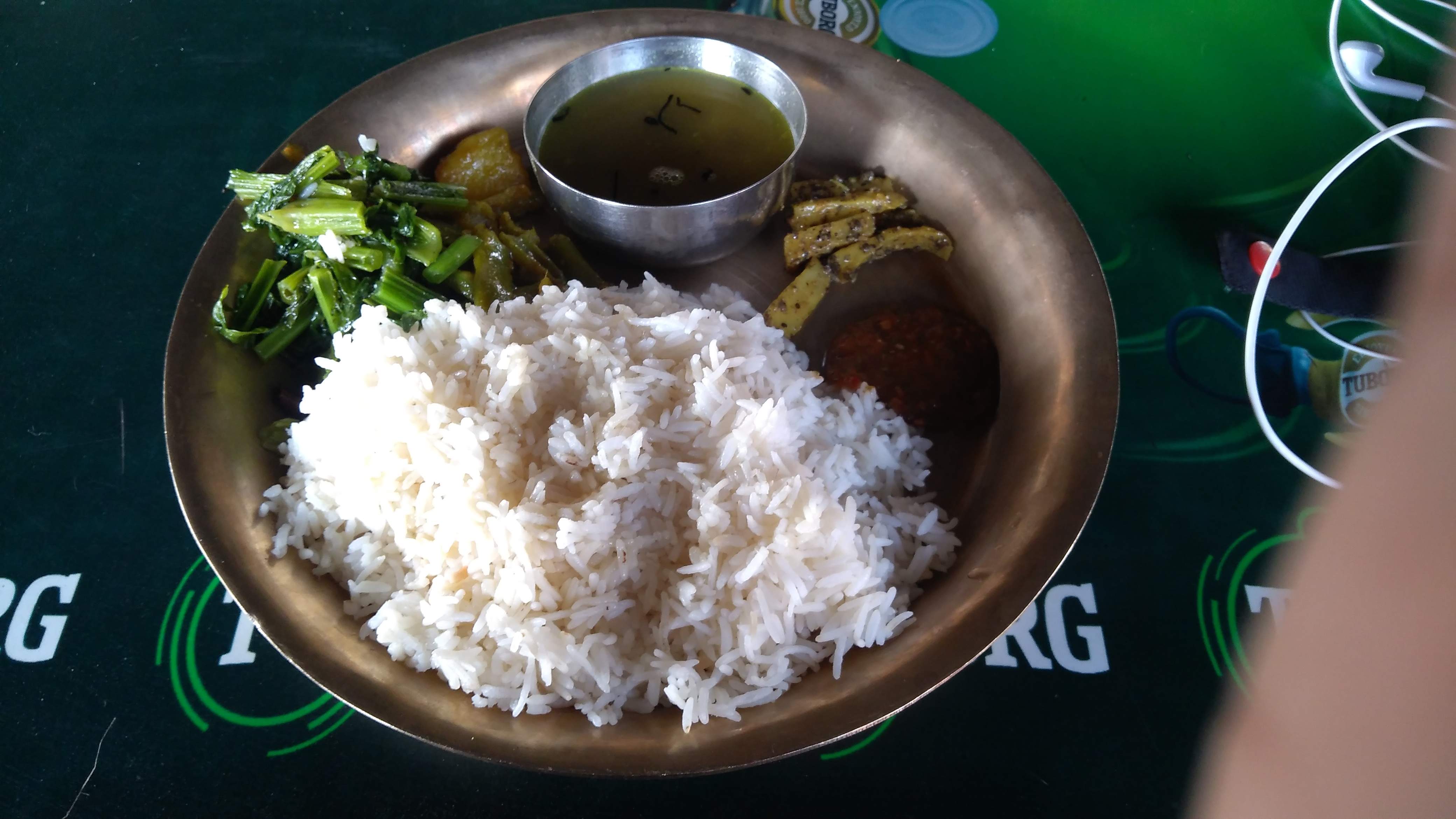 Delicacies across the border:  Dal bhat is a traditional meal from the Indian subcontinent, popular in many areas of Nepal, Bangladesh, and India. It consists of steamed rice and a cooked lentil soup called dal. It is a staple food in these countries

When you are travelling from one country to another, you require permits for both, entering and driving vehicles as well. Ram explains that all of the countries have different rules and regulations for obtaining these permits. "Nepal was the easiest. They require a vehicle permit for your bike mentioning the number of days of your stay in the country. Indian citizens don't require permits - you just have to show your ID proof and you can visit most of the places in the country. In Bhutan, however, the laws are much stricter. You need to get permits for yourself and your vehicle, and from the border they will give permits to only two cities - Thimpu and Paro. All of the other places are restricted areas and to visit them you would need ‘restricted-area permits’ from Thimpu, which is the capital of Bhutan. You also need to show them your hotel bookings when obtaining the permits. I got all of the permits near the border. In Myanmar, Indians are allowed until the city of Tamu without a visa. I went only up to that city, so I didn't require one," he reminisces.

They say that you can sleep pretty much anywhere when on the road. Ram's experiences are a little varied on that front. In most of the places he visited, Ram stayed in hotels. But in several cities, people also came forward and invited him to stay with them, lending their houses or rooms for a night. "I slept at petrol bunks too at night, when it was very late and I couldn't make it into town, or when I couldn't find a hotel. It wasn't the same everywhere. Around the eastern regions of India and Nepal, I wasn't carrying much food, although resources were readily available. In some deserted locations in the northeast, I had to carry sufficient food, as in some places there were no hotels or places to eat along the way. For the most part, getting food wasn't a major problem," he adds. 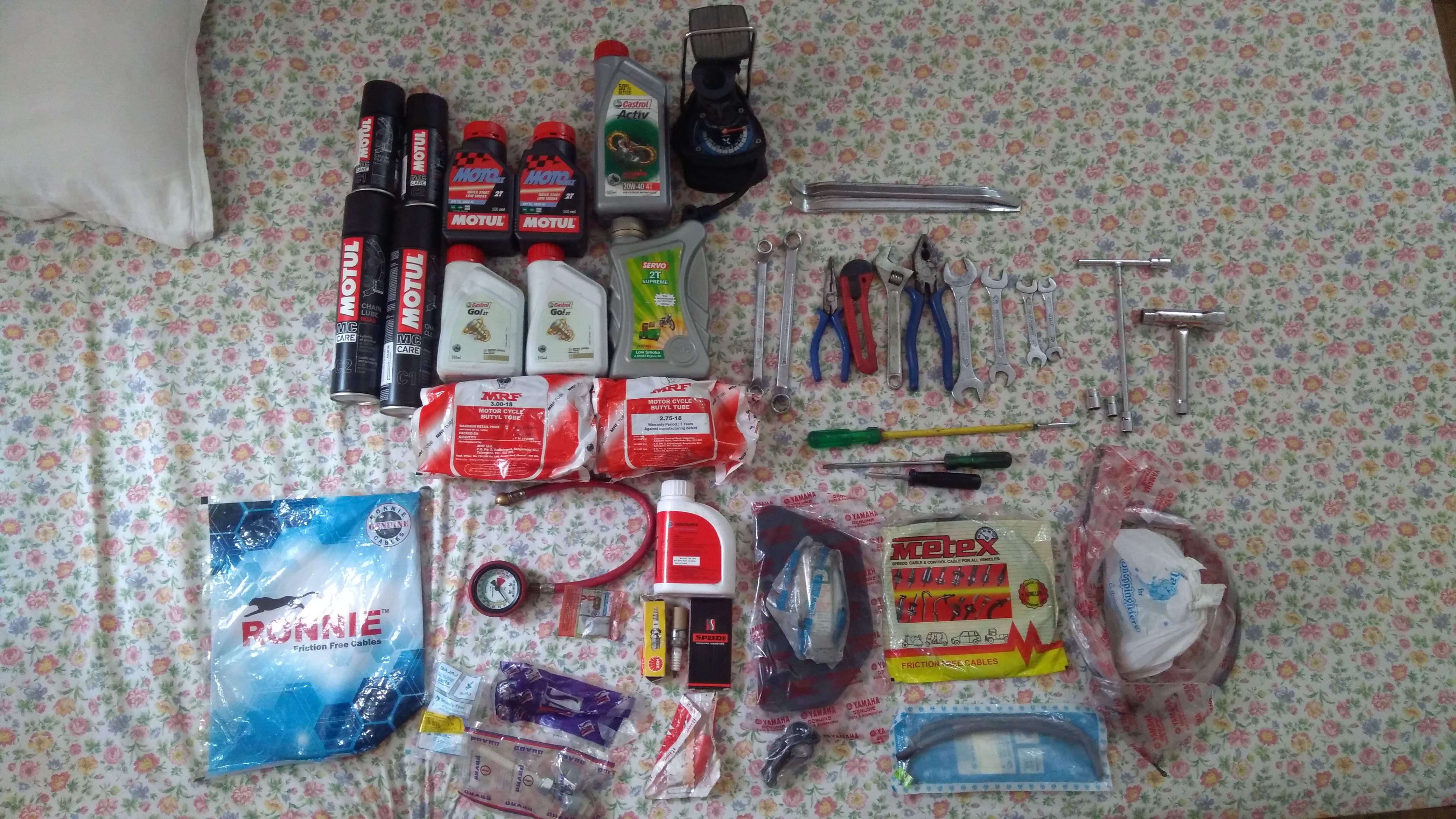 Ready to face it all: Some of the gear he carried along with him included  plyers, screwdrivers, engine oils, extra tyre tubes, cables and more

Ram did have his share of unpleasant accidents during his trip, however. Although it did not affect his trip schedule to a considerable extent, it would have been quite scary to be travelling alone and needing to fix your vehicle all by yourself. "Somewhere in Bihar, on the way to Gorakhpur, I had to pull over to check some issue with the seat — which had slipped out of position. Thinking it would be just a trivial problem, and given the fact that I was already running very late and still had 100 km to cover to reach Gorakhpur, I decided to ignore the issue. My bike got me safely to Gorakhpur. I sat down the next morning to check what the problem was. Oooh! Wasn't I in for a big surprise," he exclaims. 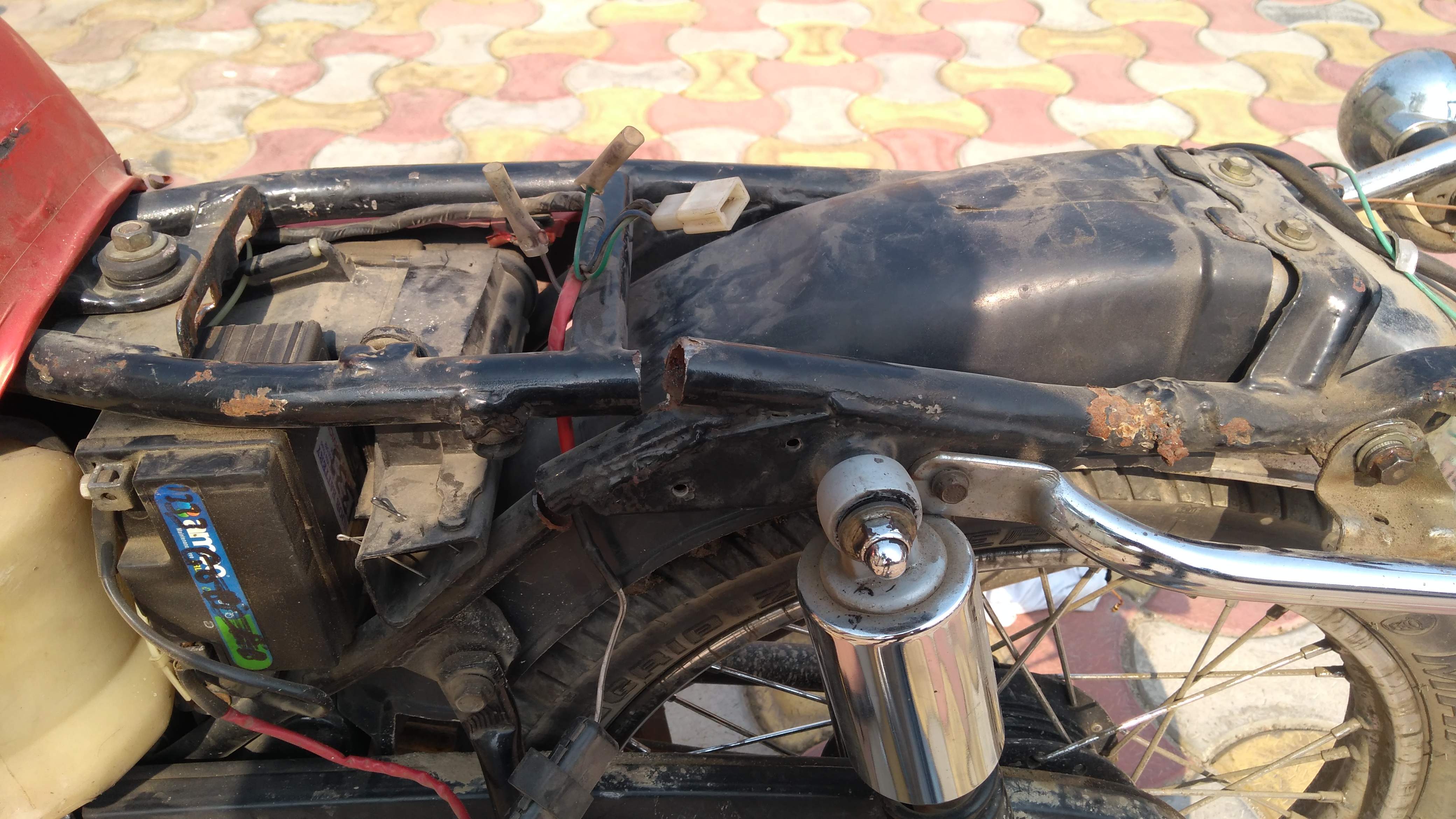 Unbroken spirit: Ram's bike had broken down at one point but that couldn't stop him from completing the trip

The problem was life-threateningly serious, "The problem was actually a broken frame. It was completely broken in three places. Because of the broken joints, the rear mudguard was almost touching the tyre. Only a single joint was still intact on the right side and it had luckily held for the rest of the 100 km that I rode towards Gorakhpur. If that had failed, I can’t even imagine the disaster that I might have gotten myself into. Initially, I was very doubtful about how well the weld would hold through the entire trip. I made sure that I positioned the weights on my bike so that they wouldn't stress the welded joints. The motorbike's frame couldn't hold the weight of the top-box which was placed at the extreme rear. Even though I had enough confidence with this arrangement after all the long rides I had previously taken, all it took was a single pothole in the middle of that night in Bihar to bring that confidence crashing down. I kissed goodbye to it, decided to move on without it, and left it at the hotel in Gorakhpur. Bad positioning of weights, I must say," he recalls.

Ram says he didn't have to face any trouble because he was biking around just before the Lok Sabha elections. "There were no problems on the roads as such. In Manipur I had to increase my stay by one day as Prime Minister Modi had come to Imphal for his election rally," he adds. Ram, who was also a musician, says that he quit his band recently because he wanted to travel more and focus on his career. He was part of a metal band where he was a vocalist and a lyricist. "Being a musician made me grow as a human being and it has opened me up to being more aware socially," he concludes.