Varsha Gautham, who was once the youngest Indian to win an Asian Games medal talks about the 2018 Asian Games Experience

I last spoke to Varsha Gautham almost a year ago. Back then, I'd known her as the youngest Indian to ever win an Asian Games medal (a bronze). She spoke at length about her entry into sailing, a sport that is alien to more than half the population. She was pretty excited about dedicating her life to excelling in the sport and told me about how even her father tried his hand at sailing just to encourage her. Excited hearing all of this, I'd forgotten to ask her one of the most basic interview questions that I should've asked her in 2017 — her plans and dreams for the 2018 Asian Games. Nothing and no one other than me and my bad memory can take the blame for that.

Fast forward to 2018, there I was, waiting in the living room of her house in Chennai. Varsha had just woken up from her short nap, a luxury that I just snatched from her for the sake of an interview. She had returned from Jakarta just a few days ago, after winning yet another Asian Games medal (a silver this time) for 49er FX with her partner Sweta Sherveger. She made a big leap from bronze to silver, but was it a cakewalk? Absolutely not! At 20, while most youngsters are figuring out life and having fun, Varsha is living a dual life of being a sailor and a final-year student at Chennai's MOP Vaishnav College for Women. All this while fighting a court case against the Yachting Association of India and the Indian Olympic Association for sidelining her during the selection, despite her performing better than others. "I never thought I would make it to Jakarta," she says, adding, "But I had complete faith in our judiciary."

And is she happy with her win? Absolutely! She has made the country proud. But now, all the winner clearly needs is her beauty sleep. Here are the excerpts from our conversation:

When did you get into sailing?

I was eight when it all began. A family friend moved to Chennai and they got interested in the sport. Later, when we also moved here, they insisted that I try it out too. It was really nice because I couldn't drive a car, but I could sail my own boat in the sea which I absolutely loved! 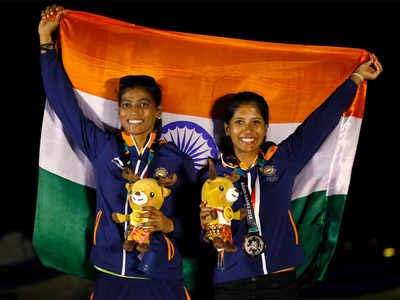 Silver lining: India ranked 8th at the 2018 Asian Games by bagging a total of 69 medals that included 15 gold, 24 silver and 30 bronze medals

During the training programme, we wake up and work out. Your entire body needs to be strong. You have to be strong mentally too. Apart from that, we talk about what we want to do on that particular day and just make sure that it happens. We also discuss progress. That's about it.

How would you guide other young people who are interested in sailing?

Reach out and talk to people about it and find the nearest sailing club. You definitely have to try it out and only then will you know if it's your cup of tea. There are no two ways about it.

There will always be somebody to help you take it forward. Also, do not be confused between sports and education. Both can go hand in hand.

How was the whole Asian Games experience?

It a lot for us to get there. There were troubles in getting the boat there and during the selections. It was such a great feeling to come home with the silver medal, especially after all the hard work and stress, particularly during the past three months. I'm really happy about it.