We will not go down without a fight: Sai Balaji, JNU's newest left-leaning Students Union President

A lot of violence has gripped the campus and the new President, a boy from Hyderabad, expects that this will continue through the year. We talk about his journey of discovery and his politics

N Sai Balaji won the President's post in the JNU Student Union polls with a staggering total of 2161 votes, these elections saw one of the biggest voter turnouts ever and it was all over the media. So Balaji's face has pretty much been everywhere. But yesterday, the warden of the hostel that he has lived in for four years suddenly did not recognise him and demanded that he show him his ID to enter.

This happened after he returned from the police station after filing a case against ABVP members for physically assaulting him and other students. This was just a day after the results were announced, around 3 am that night, Balaji said that the ABVP members almost "lynched" two students and when he had gone to find out what was wrong, he was beaten up too. When he was inside the police station, the ABVP members surrounded the police station and allegedly threatened to "burn" him and "cut him into pieces". This is a lot to go through for someone who barely had the time to even come to terms with the fact that he had won the elections.

But Balaji is undeterred. We spoke to him about an hour before he was to take his oath and despite the crazy events of the last few days, this PhD student from the School of International Studies doesn't seem worn down. This is just the beginning anyway, he says. At the top: Sai Balaji previously did an undergraduate degree before joining JNU for his masters

Before we get into the heavy politics of JNU, can we start with you telling us a little bit about yourself?

I was born and brought up in Hyderabad, my father had migrated from a small village. I was born to parents who had had an inter-caste marriage. So from very early on I never fit into any of society's norms, I was born "impure". But I had a very liberal upbringing and my parents have always supported me in whatever I did.

How did you begin to identify yourself with the Left, was it after you came to JNU or was it the influence of your parents?

No, no, my parents didn't influence me in any way but I've been a leftist for as long as I can remember. There were personal situations and reasons that led me to lean towards the Left ideology. It started with the 2008 global financial crisis — it completely changed the way I looked at the world. Everybody praised capitalism but it rendered people jobless, within seconds people lost complete control of their lives.

All my life I have had health issues, this means that my family was always haunted by long medical bills and healthcare was pretty unaffordable. My parents had to strive their whole lives to give my brother and me a good education besides paying the bills, so I have seen hard times. I grew up in a cosmopolitan city like Hyderabad but we've been in difficult situations which was why I almost automatically gravitated to the Left ideology. I just started reading and learning a lot and then I decided to join JNU.

It was only in the third attempt that I actually managed to get in, after that I became associated with the All India Student Association. I stood for elections twice but just like with my entrance exam, I only managed to get lucky the third time. Third time lucky: Sai Balaji had stood for the elections to school posts twice in the past but never won

Did your parents worry about you studying at JNU, considering its history of serious, and sometimes violent, politics?

No, not at all. The only question my father asked me when I got admitted here was how much the fees were. I told him it was 283 rupees and he gave me 500 rupees saying - "I know you want some extra cash, so I'm giving you this. Now tell me what are your actual fees?". Then when I explained to him that 283 bucks was actually my fees, he was so shocked. He couldn't believe it. (laughs)

Now with all the violence over the last two days, surely they (parents) must be worried?

Of course, they are concerned for my safety but listen, today almost anyone anywhere is at risk of getting lynched. You never know, tomorrow it could be me or you. Lynchers are right at our doorsteps. We are living with fear, we have no way of understanding what these lynchers will do.

I'm sure you prepared a great manifesto and already have a lot of things planned. But has the violence of the last few days changed your priorities?

Yes, the first thing on my agenda now is to ensure all the students on campus are safe. People are afraid to step out of their hostels and many of us are not even being allowed to go into our hostels. There's an atmosphere of fear, therefore my first priority is to ensure everyone is safe. Plunging-in: Sai Balaji had to get down to work even before he took his oath

When things calm down, what are the other issues on your agenda?

There is a deliberate attempt to curb freedom on campus, currently, the administration says they've imposed section 144 but when I ask them for a written order, everyone says they don't have it. It's just an oral order, they say. Before we were denied permission to protest within 100 metres of the administrative building, now they want us to stop protesting EVERYWHERE. The media has also been banned on campus.

The same problems that taunt the nation, taunt us too - corruption is a huge one. The administration wants to implement online entrance exam - now, tell me, how can a humanities student answer a bunch of MCQs to show their capability? And these entrance exam committees have hired people who are accused of plagiarism. The decision to implement the exam wasn't discussed at an academic council meeting either, it was implemented arbitrarily.

Besides this, the campus has issues regarding gender justice, library funds, our labs are lacking. Basically, our very system of education is being destroyed. Plus, all the violence the ABVP is bravely unleashing is the result of the support it receives from the administration.

The Mamidala team is able to do this because the current government is in power. The Modi government goes on about Beti Bachao but sexual harassment is rampant on our campus. Like the government, the campus is becoming anti-women and anti-minority. The ABVP is using all sorts of intimidation tactics to create a hostile environment on campus. They are threatened by diversity and they are out to destroy it. The ABVP is doing all this because they have impunity. There are so many issues that the administration is supposed to be prioritising like the reservation model, GSCASH implementation, hygiene on campus, issues related to the needs of disabled students, the Najeed case. However, all this is ignored because the administration is allowing the ABVP narrative to run. 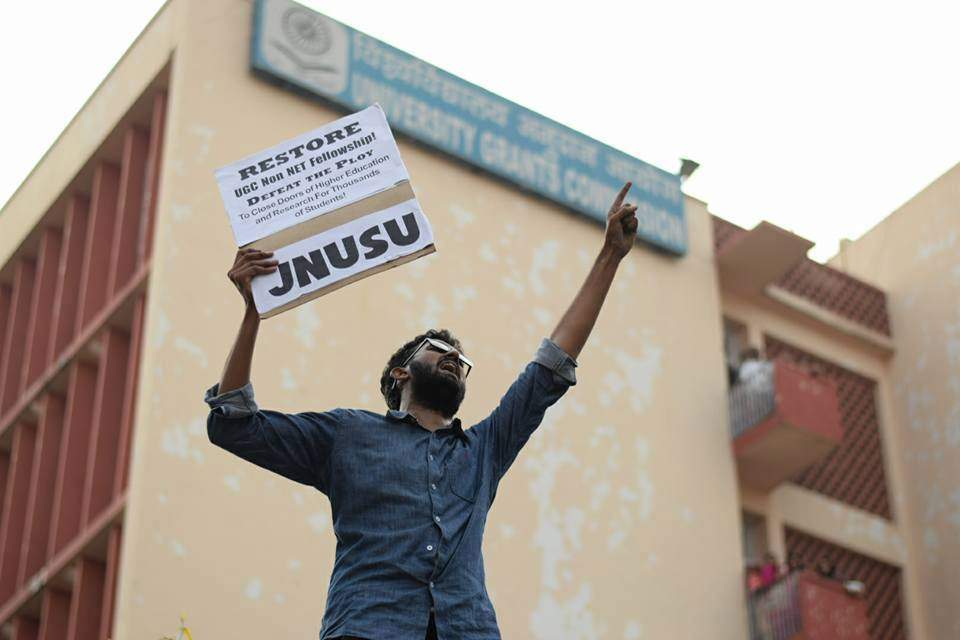 Restoring Justice: Sai Balaji has been at the forefront of many protests during his time ar JNU

But the ABVP has claimed that many of their members have also been assaulted. In fact, they are also issuing press releases and reaching out to the media themselves with "their side of the story". Is this also a tactic or are we missing out on something?

The ABVP can go to any extent to bully people. Again, it is because they have the impunity. See, when I say that I'm hit, I have the proof to show you that I have been hit. I have photographs and videos to prove it but what does the ABVP have? They have no proof of anything, no evidence of us assaulting them. Their "word" is their proof. When they knew they were losing the election they resorted to fascism, they cannot accept the fact that they are not in power. They tried to manipulate the EVMs, they tried everything but that their masks peeled off and they started off on their lynchistan agenda.

Do you think that the number of people applying to be members of the ABVP is increasing though?

Not at all, their numbers have been stagnant. They continue to get the upper caste votes but they're limited to just those. 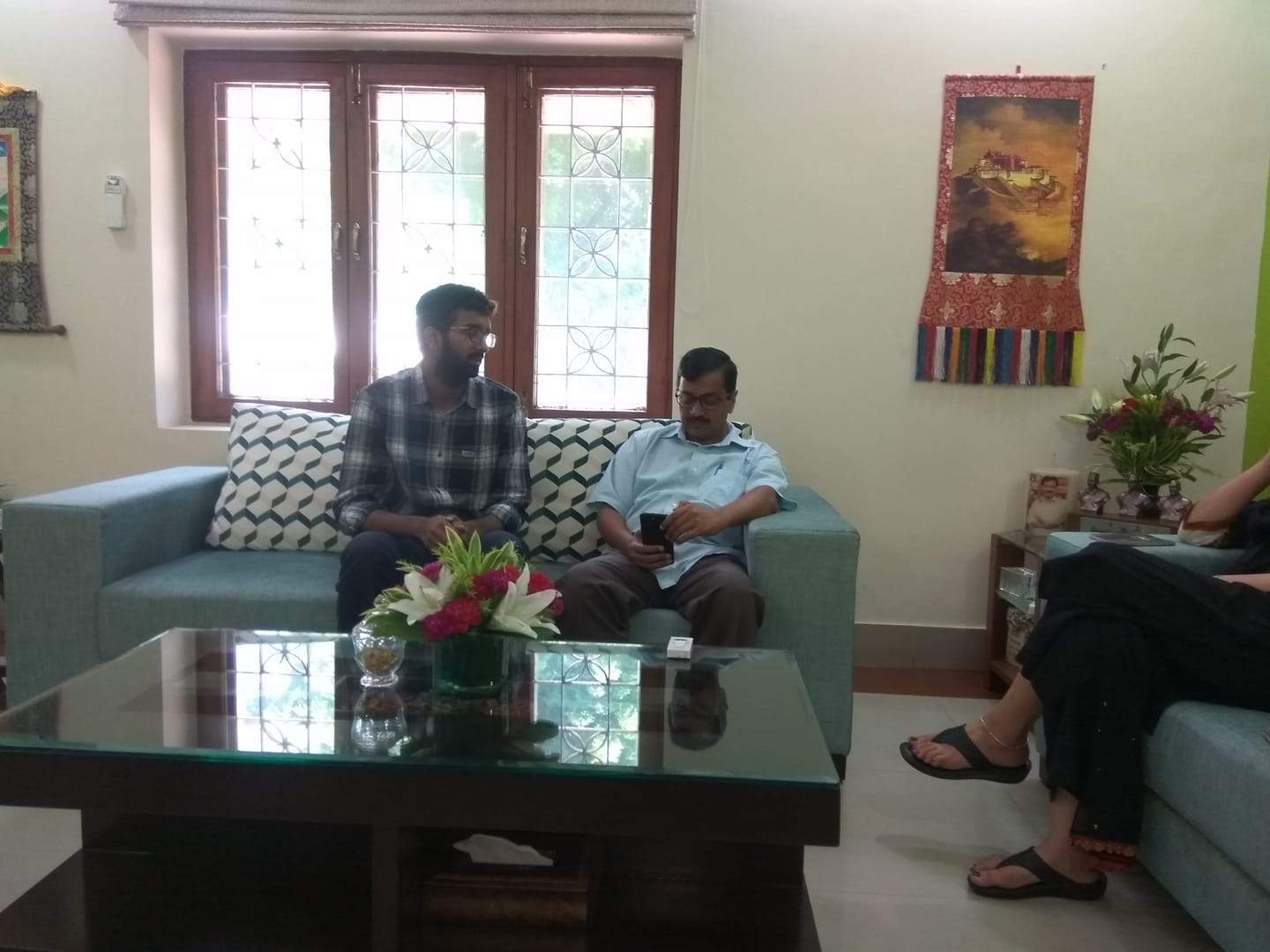 So, how do you plan to tackle this problem?

Non-cooperation. We will assert our fundamental rights and we will initiate peaceful dialogue. We have to do everything in our power to ensure the physical safety of the students and also our freedom of expression. We have to collectively come up with measures to ensure we continue to have our rights. The JNUTA is also by our side, even at the police station when we went to file a complaint, they were the ones who stood like a wall, protecting us from the attackers. As the United Left, we have won the elections. The police, the judiciary, the parliament — no one seems to be on our side but we have come together and that's a strong message both to our administration and the Modi government.

Do you think there will ever be a time when you will be able to have a dialogue with the ABVP?

That's an oxymoron. I don't think they believe in dialogue.

So, how do you foresee the year?

Turbulent. What happened in the last two days will continue. The violence will continue. But we will try to bring back the calm. Our job is to question and we will do so. We won't go down without a fight.