A picture speaks a thousand words, they say. And Syamsundar Vunnamati sure has a lot to say, especially about the various issues that the Dalit community faces even today. That’s why he decided to use cartoons as a medium to portray his thoughts.

Born and brought up in Vijayawada, Syamsundar realised he had a knack for drawing from a very young age. But it was only during his stint at JNU that he became serious about art. “There used to be a Dalit NGO that published a magazine called Insight. I used to draw cartoons on Dalit issues for the magazine. Later, while pursuing my MPhil in Colonial Indian Cartoons, I understood how to present social issues through cartoons. I understood that cartoons can be used for social emancipation. Around this time, social media became a rage. Many of my close friends suggested that I post my cartoons on Facebook so that they could follow my work. That’s how I started getting recognised,” says Syamsundar. The story so far: Syamsundar's first works were published in a magazine called Insight, run by a Dalit NGO

Syamsundar’s cartoons are mainly about Dalit issues and a promotion of Ambedkarite ideology. “There are various dimensions within Dalit issues,” he says, “Dalit patriarchy, hypocrisy by young university Ambedkarites, discrimination among dalits, honour killings, love stories and untouchability. I try to bring out SC/ST atrocities through visuals and explore Dalit aesthetics,” he adds. So far, his cartoons have been published in academic works, anti-caste blogs such as Round Table India, Sahitya Academy and the Indian Literature Journal. Some are published in art magazines and Dalit magazines as well. But his works are primarily circulated through social media. While he feels happy that young Dalits are exposed to his cartoons via social media, he says, “I want to target everybody because change is expected from the oppressors — the privileged castes.”

He adds, “Unfortunately, for a majority of the casteist Hindu youth, the first thing that comes to mind when they hear the word ‘Ambedkar’ is reservations, not the constitution or anti-caste struggle. I want my cartoons to erase such false notions. Another important issue is equal rights for Dalit women. Ambedkarism stands for human rights. The youth must know the real Ambedkar.” 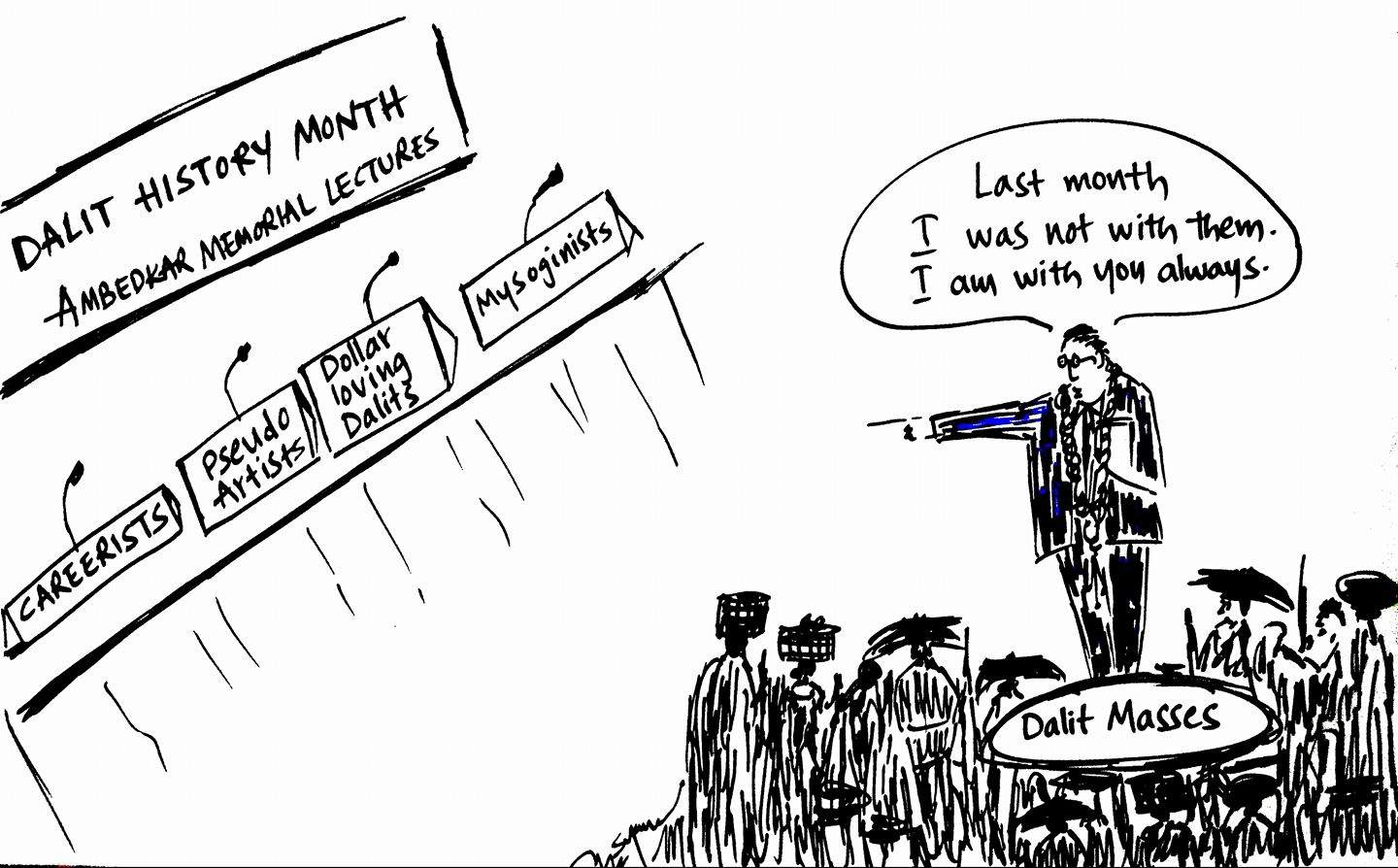 The message: Some of the issues addressed in his cartoons are Dalit patriarchy, hypocrisy by young Ambedkarites, discrimination among dalits and honour killings

With over a few hundred cartoons so far, Syamsundar hopes to publish his own Dalit cartoon magazine someday.