Indian Institute of Cartoonists is the only institute in India which promotes cartoons and cartoonists in the country. It also has some originals by RK Laxman and plans to store them in their archives

Who does not like cartoons? From senior citizens down to a six-year-old child, everyone loves a good cartoon. Because they can make you laugh and at the same time send a serious message. When it comes to Indian cartoons, nothing can beat the late RK Laxman. However, we hardly get to see the legendary Laxman's original work unless you're at a few national and international cartoon exhibitions. If you want to take a closer look at his work then you should rush to the Indian Institute of Cartoonists in Bengaluru, which is the only organisation in India to promote cartoonists and their work this side of the world.

VG Narendra, Managing Trustee, Indian Institute of Cartoonists and a cartoonist by profession has worked closely with famous cartoonists like RK Laxman and Shankar Pillai. In fact, it was Shankar Pillai who gave him the idea of starting an institute to bring all the Indian cartoonists under one roof. In 2001, he started the institute in a small office at his residence in Nandini Layout. He says, "Promoting cartoonists, their work and conducting workshops for them were a few things that I did from my home-office. Seven years later, with a few cartoonists and politicians funding this initiative, I was able to open my own cartoon gallery in a 5,000 square feet at Trinity Circle where I have exhibited the work of 155 cartoonists from India and other countries till date."

What an honour: Famous cartoonist RK Laxman being felicitated with the Lifetime Achievement Award

Explaining his journey of becoming a cartoonist and the golden days of the Great Indian Cartoon, he says, "I was born and brought up in Dharwad. When I was pursuing a BSc degree at Karnataka University in 1967, scribbling cartoons was my hobby. I used to send my cartoons to various Kannada dailies and weekly newspapers. I felt happy when they appeared on the front page. Later, I flew to Mumbai to develop my hobby and also earn my bread and butter. It was in the 1970s that I approached RK Laxman with my collection of work. He appreciated my work and I got a break at the Free Press Journal."

He further adds, "I felt proud that I was working at a place where many famous cartoonists like RK Laxman and also Bal Thackery had worked as cartoonists. My concentration was more on drawing political cartoons and in 1973, I got a letter from Shankar Pillai appreciating my work and asking if I would like to join his weekly. Without a second thought, I joined. At that time, I even used to meet politicians to understand their point of view for various issues."

However, in 1975, it had to shut down due to the Emergency. The cartoonists were barred from drawing anything against former Prime Minister Indira Gandhi and her government. "With no job, there was no money in hand which made me come down to Bengaluru. From 1976 until a few years ago, I worked as a cartoonist for various newspapers and magazines in Bengaluru."

The actual journey of forming an association and bringing all the cartoonists on one platform started in 1979. He formed a Karnataka Cartoonists Association (KCA) and held a workshop for the cartoonists from different parts of India. "I was president of the KCA for seven years. I even invited RK Laxman for the inauguration of the KCA which was held in Kannada Sahitya Parishat in Chamrajpet. Apart from Laxman, cartoonists Mario Miranda, Abu Abraham and others came together for the first time on this platform," he says happily. 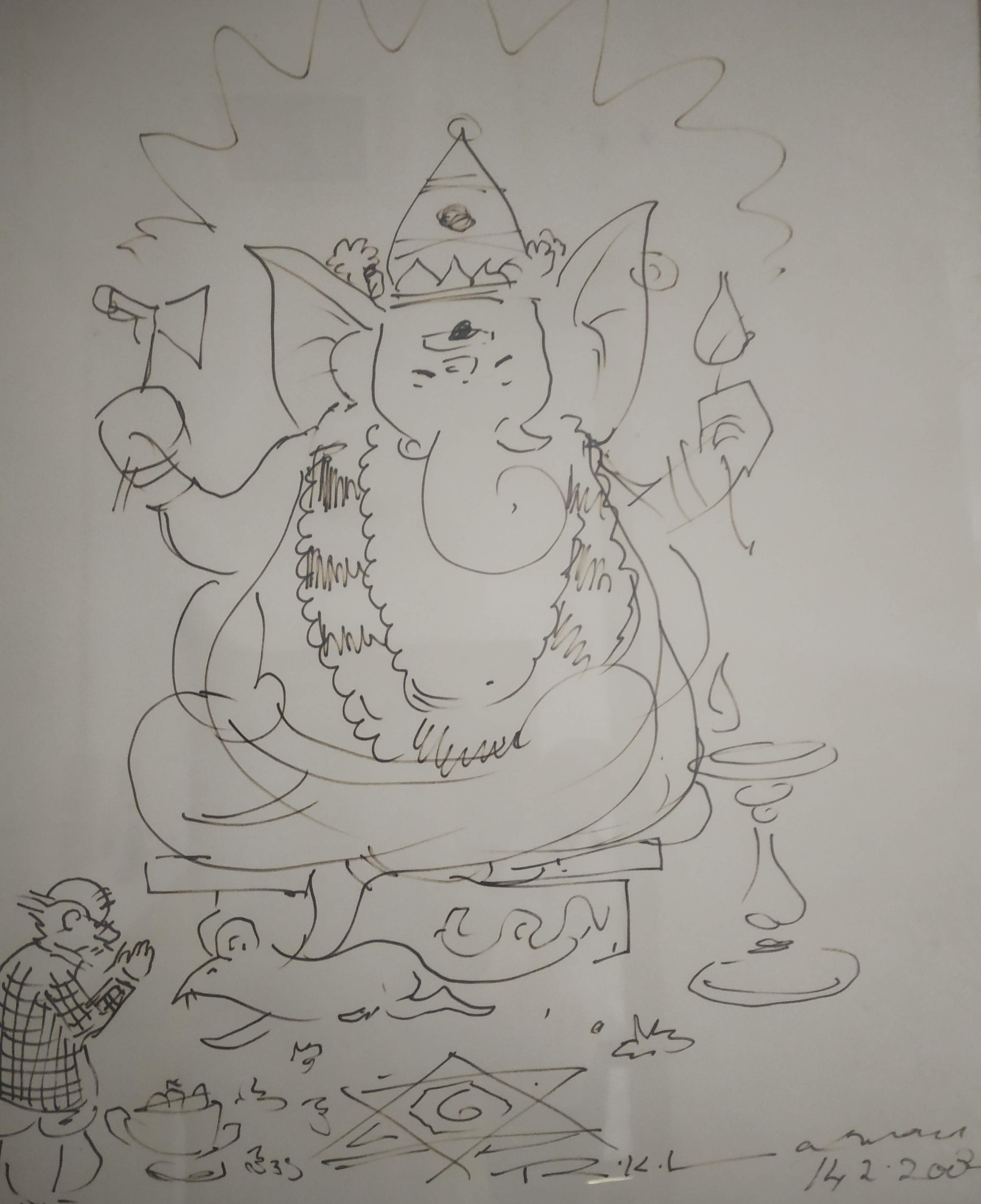 Laxman's work: The caricature of Lord Ganapati drawn by RK Laxman at the Indian Institute of Cartoonist

Quickly pressing the rewind button and thinking about the time he met Laxman again, he says, "In 2002, we felicitated him with a Lifetime Achievement Award on behalf of Indian Institute of Cartoonists. He drew a live cartoon within a few minutes and that was a caricature of Lord Ganapati which we still have in our institute. It makes me feel proud when I look at it with the signature of RK Laxman. While he could not visit me during the inauguration of our cartoon gallery in 2007, he came down in 2009  when we had put up an exhibition of his cartoons. But his health had deteriorated and he was very weak. That was the last time we met each other."

Apart from this, VG Narendra has some unique books of RK Laxman's cartoons. One of the books was given by Laxman's daughter-in-law, Usha Srinivas, which has 60 caricatures of well-known personalities.