Meet Sreeja Vasthavi, the first ever Dalit woman to stand for the Student Union elections in UoH

At one of University of Hyderabad's presidential debates, an anonymous question posed to Sreeja Vasthavi, a candidate, was - Being a Dalit woman, do you think you can run the Union? According to someone's FB status, the SFI and the ABVP groups began to blame each other for the question, but Sreeja just stood there. Apparently, with a pretty wide smile on her face. "I didn't want to respond, it's not a question that warranted my reply. But I had to say something so I just told them that people feared the fact that the Dalits are coming into the mainstream but that won't scare us into the shadows," the candidate said.

Ambedkar had once said that he measured the progress of a community by the degree of progress which women have achieved. It isn't a surprise that this happens to be Sreeja's favourite Ambedkar quote. She became the first ever Dalit woman to stand for the President's post for the Student Union elections at the University of Hyderabad.

Growing up, Sreeja never understood why a teacher would insist that she sit in the last row. When she went back home and told her father that she could barely see the blackboard, her father asked her if she had done anything to provoke the teacher. She couldn't remember any instance where she had done so, but she assumed it had been her fault anyway. 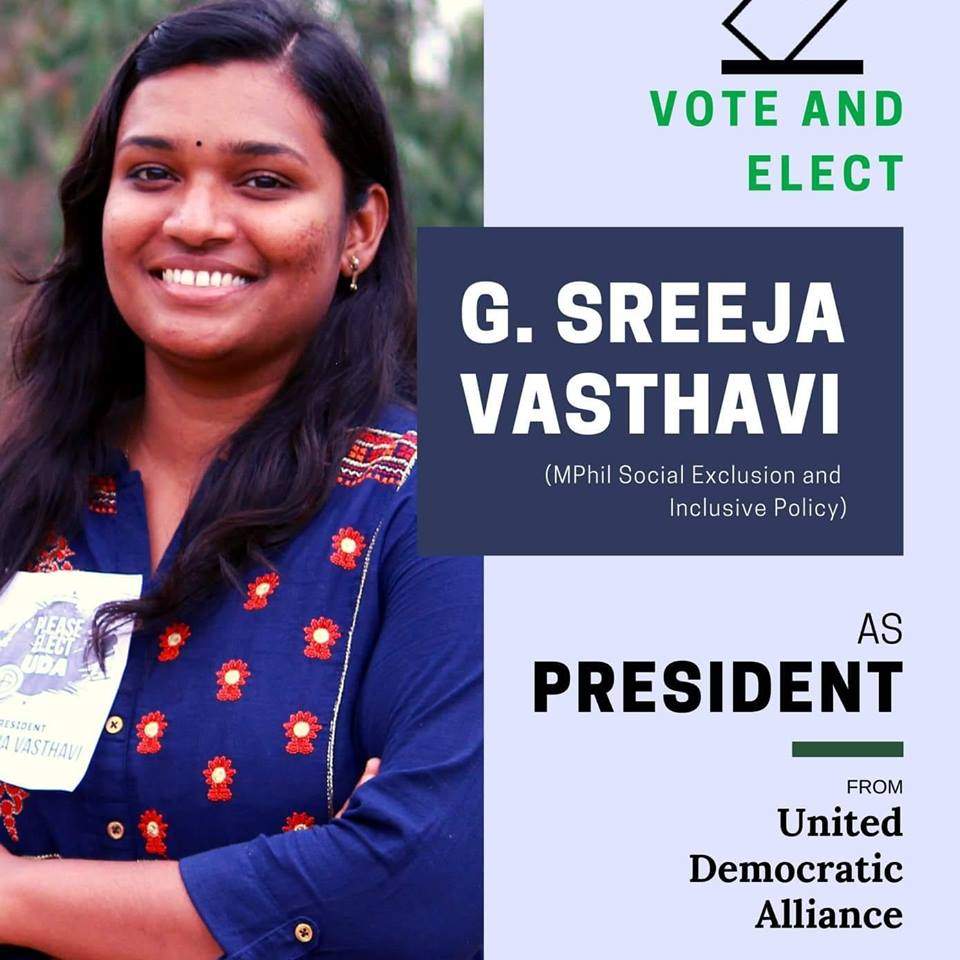 A few years later, she couldn't understand, it happened again when her Telugu teacher who had been extremely fond of her because she would sing and recite poetry so well, suddenly stopped paying her attention. When she asked what was wrong, he simply dismissed her saying she wasn't good anymore.

Over the years, there were more professors and friends who distanced themselves from her, even at UoH, but it was her time on campus that finally gave her an answer to all the question she had had. It was her caste identity. She had always been aware of caste discrimination but never realised that she had been experiencing it. But, it all changed with Rohit Vemula's death.

When Sreeja entered the portals of UoH, like most Dalit students do, she approached the Ambedkar Students' Association's help desk. The help desk had been around since 1993 to help students from marginalised backgrounds with the admission procedure as most students and their parents face many hurdles in the process. That particular day, the person who sat at the desk was Rohit Vemula. That was the first time she met him. The only other time she met him was when he came to help with another issue the students were facing. Yet, his death changed her whole perspective on life, one of the reasons that pushed her to become an active member of the ASA and today, a candidate for the President's post.

"There were a series of things that kept happening to me and these incidents were coinciding with the things that were happening with Vemula. It was then that I slowly began to realise the role that caste was playing in my life" - Sreeja Vasthavi

When she approached the desk, Sreeja's father eagerly asked her to enroll as a member of the ASA and was keen to see his daughter get involved in Dalit issues. It had been his dream to study at UoH too, but his circumstances hadn't allowed him to. Sreeja wasn't that enthusiastic about ASA though, "I was very focussed on my studies at that point and till very recently, I aspired to be in the civil services. So I was only concentrating on my studies except when the elections came. I cast my vote for the ASA, but otherwise, I didn't involve myself much in it," Sreeja said.

But over the next few years, things changed."There were a series of things that kept happening to me and these incidents were coinciding with the things that were happening with Vemula. It was then that I slowly began to realise the role that caste was playing in my life and watching what was happening to Vemula made things more clear to me. So when he passed away, it changed my perspective completely," Sreeja said.

When asked to elaborate on these incidents of discrimination, she says she doesn't want to throw any light on them right now, she would talk about it when the time was right. Not now.

After Vemula's passing, Sreeja began to attend more meetings conducted by the ASA. She says that she especially loved their Saturday meetings where the members would just gather around to talk and discuss Ambedkar. Over the next two years she became one of the most prominent members of the group, so much so that her life-long passion of getting into the civil services has also changed. "Now I want to become a full-time activist, an Ambedkarite activist," she says.

So how does it feel to be on a contesting panel consisting of a majority of women? "It feels absolutely great. I was so happy to see that the United Democratic Alliance was nominating so many women candidates and for such crucial positions." If she did get elected, Sreeja says her first steps would be to do something about the 'anti-student' policies that are being formulated by the administration, especially their efforts to reduce the number of reserved seats for minority students.

Were her parents happy, especially her dad? "They're absolutely thrilled. My father is always telling everyone how I'm going take on issues that affect Dalit women and how I'm going to help further the movement."

Out of the eight candidates the UDA is fielding, six are women. If all the candidates get elected this year UoH won't just have its first Dalit woman President but will also have the first ever Muslim woman in the Union and will be the first female majority Union. Let's hope that change is in the offing.