Is it right to call life away from social media therapeutic? Shehla Rashid Shora would definitely vouch for it, thanks to the endless number of trolls, abuses, allegations and threats that this 29-year-old had to work her way through. For the average internet troll who thought of every Muslim as a terrorist, she was the perfect victim — a vocal Kashmiri Muslim woman who went to JNU.

After a decade-long stint as an active Twitter user, Shehla decided to deactivate her account a week ago and that came as a shock to Twitterati. Some were happy. Quite a few were sad. But this ex-JNUSU vice-president was definitely in need of a break. "Life is way better without twitter," she tells us. "A few days off twitter and I feel so much better. Usually, I wake up and the first thing I do is check Twitter. The trolls there would cripple me and I would be so suffocated that I wouldn't want to get out of bed." 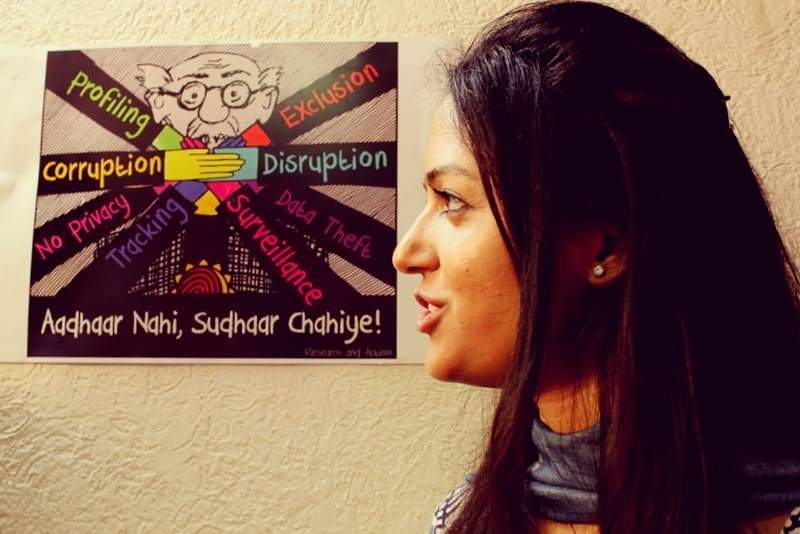 They had a good run though. Twitter had been her good companion for years. A decade ago, a curious Engineering student in NIT Srinagar joined the microblogging platform to follow Barkha Dutt and Omar Abdullah. Years down the line, she acted as an influencer who spread awareness about menstruation and raised a good amount of funds for the Kathua rape victim's family. But when it started biting her back with baseless allegations of her misusing the funds, Shehla knew that she had hit her limit. Even though she maybe back to the platform, right now, she needs some time to take care of herself.

She was preparing for her PhD thesis' presentation, due in a couple of weeks when we caught up with her. Nevertheless, she spent a good thirty minutes, patiently and calmly answering all the questions we had.

You've been asked this many times before. But what was the exact reason you left twitter?

Ever since I've deactivated twitter, I've been asked to be strong, ignore and not worry about it. I can easily land a comfortable job that pays me a six-digit salary. Yet, I chose to be an activist because I'm a sensitive person. We activists believe that compassion and empathy make us human beings. But we can't become numb to abuse and trolling. Abuse isn't acceptable. When I'm talking to someone, I try my best to not hurt them. I'm soft spoken and I don't abuse people. I deserve the same treatment. Just because I'm from a different sect, I'm not going to put up with this. The magnitude of abuse and trolling I get is unmatched. These abusers do it because they know that I'm vulnerable and from a marginalised community. I'm called an ISIS supporter and they get away with it because I'm Muslim. Try calling Modi the same and they'll land up in jail. 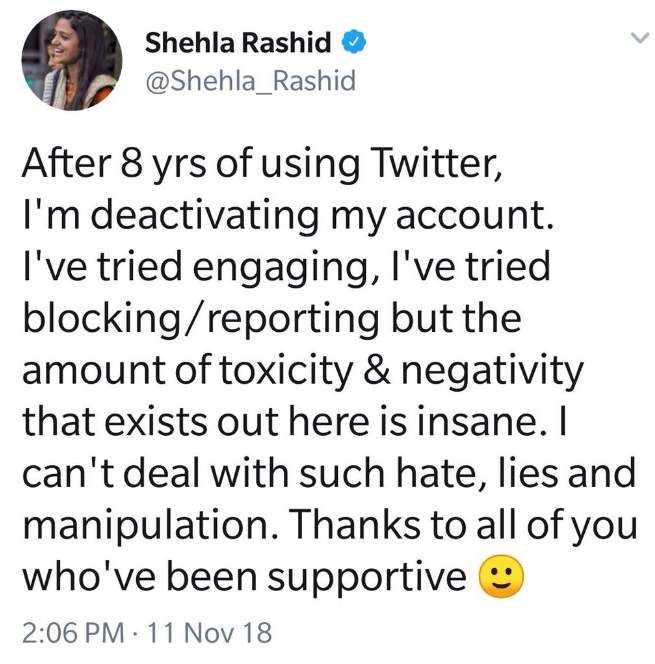 Do you reckon you'll be back?

I don't know, but right now I need some time to take care of myself. Even if I report these trolls, it doesn't get treated seriously. As the 2019 elections approach, BJP IT cells are stepping up. Abuse is going to increase. Twitter needs to pull its socks up. They call themselves neutral, but they're not. Because of influencers, people join Twitter and we're creating content and engagement. Twitter can't get away with it. Abuse is making us worse as a society. My supporters also feel that I shouldn't congratulate someone from the opposite party. This makes us polarised as a society.

You're still active on Instagram and your Facebook page is still up. Why did you choose to keep those active?

The abuse on other platforms isn't that bad. These pages are my way of reaching out. I don't go on TV debates now. The last time I went on one, an RSS spokesperson told me that "the Ram Mandir will be built for sure and you'll also perform an aarti there."

What are a few funny and upsetting things that the trolls have called you?

Have you heard of a word called Chrislamocommie? Shefali Vaidya used it once while referring to me. I really liked it. It was very funny.

There are two terms that hurt me very much. One was being called a Madrasa Chap or someone being educated in a Madrasa. I was always a topper, the state topper in class XII. No matter whatever you achieve in life, if you're a Muslim, you are called this. But do they know that in some parts of the country even Hindu kids go tot he Madrasa because they offer cheap education? Whenever I write something, I'm called a Halala ki paidaish and I didn't know what it meant. For the longest time, I ignored this because I didn't know what it meant. When I realised what it meant, I was shocked. The ruling party is supporting these people and many of them are followed by the PM and the entire right-wing ecosystem. They write against you, but they won't land up in jail. By the way, I'm not even counting the rape threats here.

Hate tweet: Shefali Vaidya, a columnist who is followed by Narendra Modi constantly hit back at Shehla. She's mentioned her name in exactly 21 tweets

Have you ever complained against the rape threats?

Whom should I file a complaint against? Abhijeet Bhattacharya once called me a sex worker on Twitter. Everyone outraged, but I didn't comment. I was so immune because I get to hear this all the time. We've become that way. We're okay with bad roads and garbage. We go on with the 'ignore' and 'chalta hai' attitude.

Not even when they call you a terrorist just because you're Muslim?

I've been called a terrorist millions of times. But these people don't realise that the Muslims in the mainstream resist extremism. We know that there can be another way of fighting issues. We're prone to terrorist attacks more. I've grown up hearing that Muslims must join the mainstream. But once that happens, we're being pushed away. How will you inspire people if you see the way Muslims like me are targetted? Is it going to inspire them to join the mainstream and participate in democracy? 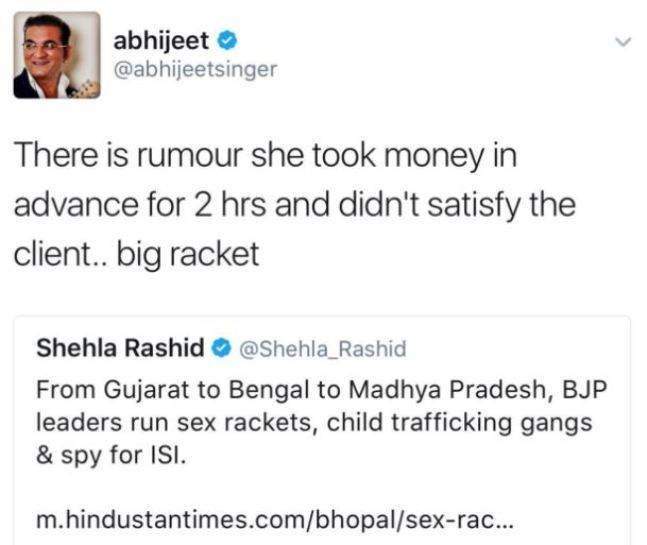 Has this taken a toll on your mental health?

I've never seen a therapist. But I feel like seeing one because the kind of abuse I get is mind-wobbling. It affects your sense of self-esteem and self-respect.

Let's forget abuse for a bit. Let's focus on something happier. What were the kind of books you were reading while growing up?

The school that I went to never let us go to the library. I'd run away every now and then pretending to go to the toilet and go to the library. I'd read books for 10 minutes. The librarian loved me and he started lending me books. I read about the slave trade in Class VI, Charles Dickens and Psychology in class VII. My mother has an elaborate library at home. What set me apart was, the whole class would memorise essays. I found that a problem, so I'd read a lot of magazines and newspapers and write an essay in my own words. The teachers would appreciate it. That set a new trend in our class. 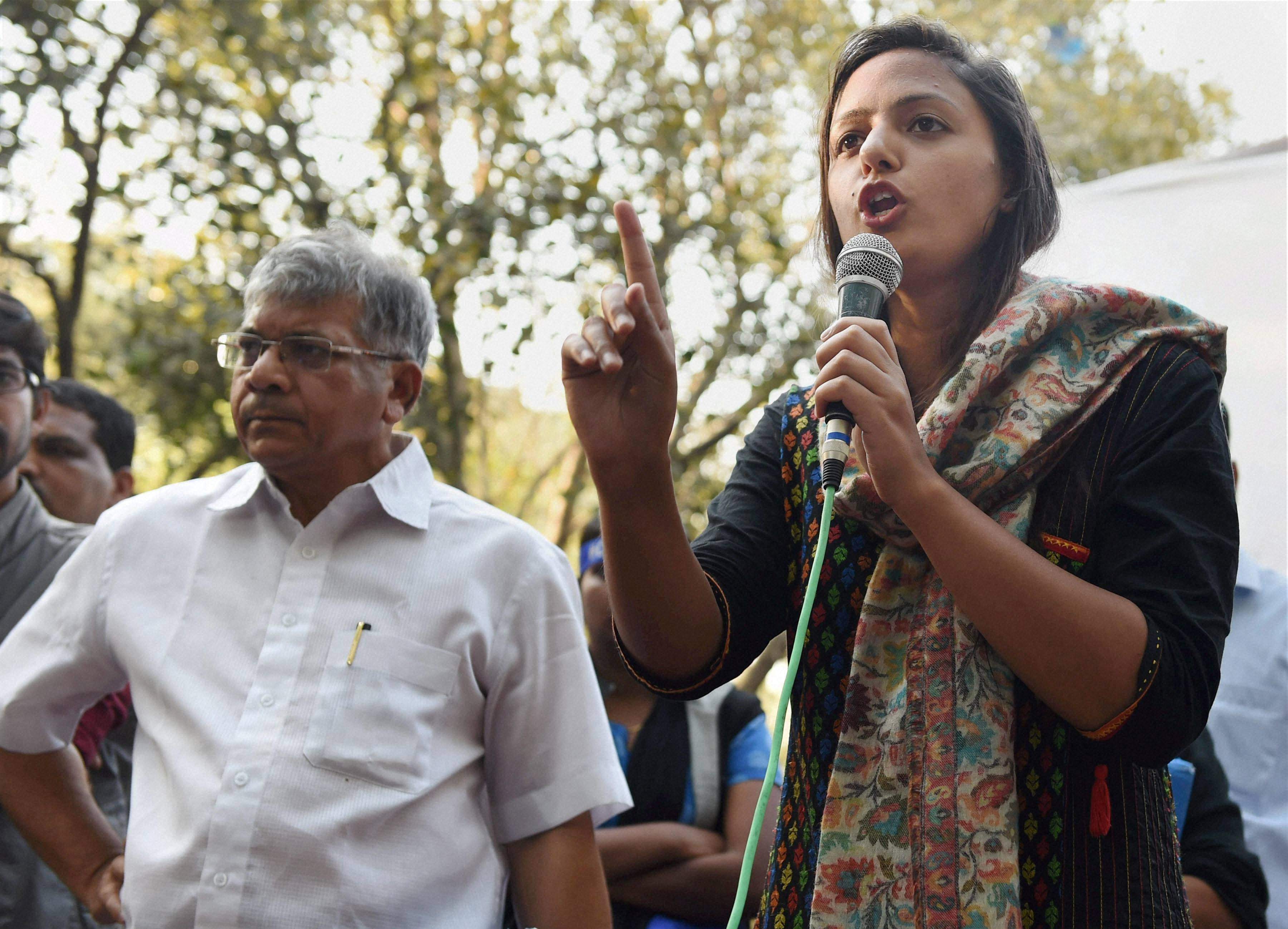 Speaking up: Shehla at a protest | Express photo

Did you always want to study at JNU?

I didn't know about JNU until 2012. I joined a three-month course that year in IIMB on Women Leadership. They had a week-long exchange programme in JNU. For the first time, I gained a real understanding of gender. Since childhood, I was never satisfied with my teachers. But after a week in JNU, I was startled by the quality of teachers there. That made me prepare for the university's entrance. I felt that I started understanding issues and was encouraged to think originally.

How was life in JNU when the whole anti-national debate happened?

It was quite difficult at first. We didn't know how to deal with it. But the students of JNU stuck together and that gave us the strength to deal with it. Before that, I was active in the occupy UGC movement. This time, it was different. I couldn't believe that Kanhaiya was arrested. I was shocked.