Designed by Delhi researchers, this air filter can sit atop any vehicle and clean up Delhi's polluted air

Pariyayantra is an ‘Air Pollution Mitigation’ product that cleans atmospheric air through filters fitted on vehicles. It does not require any power to operate

Researchers of Manav Rachna Innovation and Incubation Centre (MRIIC) have come up with an air filter that can be attached to the top of vehicles to clean the smoggy air in cities like Delhi.

With the overall Air Quality Index (AQI) of Delhi being recorded at 243.67 µg/m³ at 7 am on Thursday by the Central Pollution Control Board, imagine if every bike, auto and car in the capital could help clean the atmospheric air. As Delhi's air quality remains on the brink of turning even more severe, the Central Pollution Control Board (CPCB) is trying this new innovation this winter to improve the deteriorating air quality of the national capital.

A team of researchers from Faridabad-based Manav Rachna Innovation and Incubation Centre (MRIIC) comprising of Dr B S Gill, who is a retired researcher but still visits for research-related activities; Amit Kumar Singh, a researcher; and Prachie Sharma, a PhD scholar, have devised this product — an ‘Air Pollution Mitigation’ product that cleans atmospheric air through filters fitted on vehicles. Pariyayantra does not require any power to operate and is equivalent to the filtration provided by six room air filters. "During experiments, we found the filters can trap up to 98% of the particulate matter and this led to the genesis of the product Pariyayantra,” says Dr Gill, the professor who led the research team. The size of the filter depends on the width of the vehicle. For buses, they are larger in size while for two-wheelers they will be comparatively smaller. These are air filter units will be mounted on the roof of any vehicle — buses, cars, auto-rickshaws, and even two-wheelers. As the vehicle moves, air passes through the holes in front of the device. The filters fitted inside the unit trap the pollutants. What comes out is clean air. At least 30 such devices will be fitted on the roofs of buses in Delhi this winter on a pilot basis.

A pilot project to demonstrate the effectiveness of outdoor air pollution mitigation has been awarded to Manav Rachna Innovation and Incubation Centre (MRIIC) under EPC funds. The project, named Pariyayantra, will be installed on the rooftop of 30 buses in the city. Pariyayantra was formally flagged off by Dr Harsh Vardhan, Minister for Science, Technology, Environment, Forest and Climate Change and Earth Sciences from the Paryavaran Bhawan in New Delhi on November 1.

Amit says they began working on the project three years ago. At first, they had decided to create a filter for outdoor pollution that works on the same principle as any room air filter. 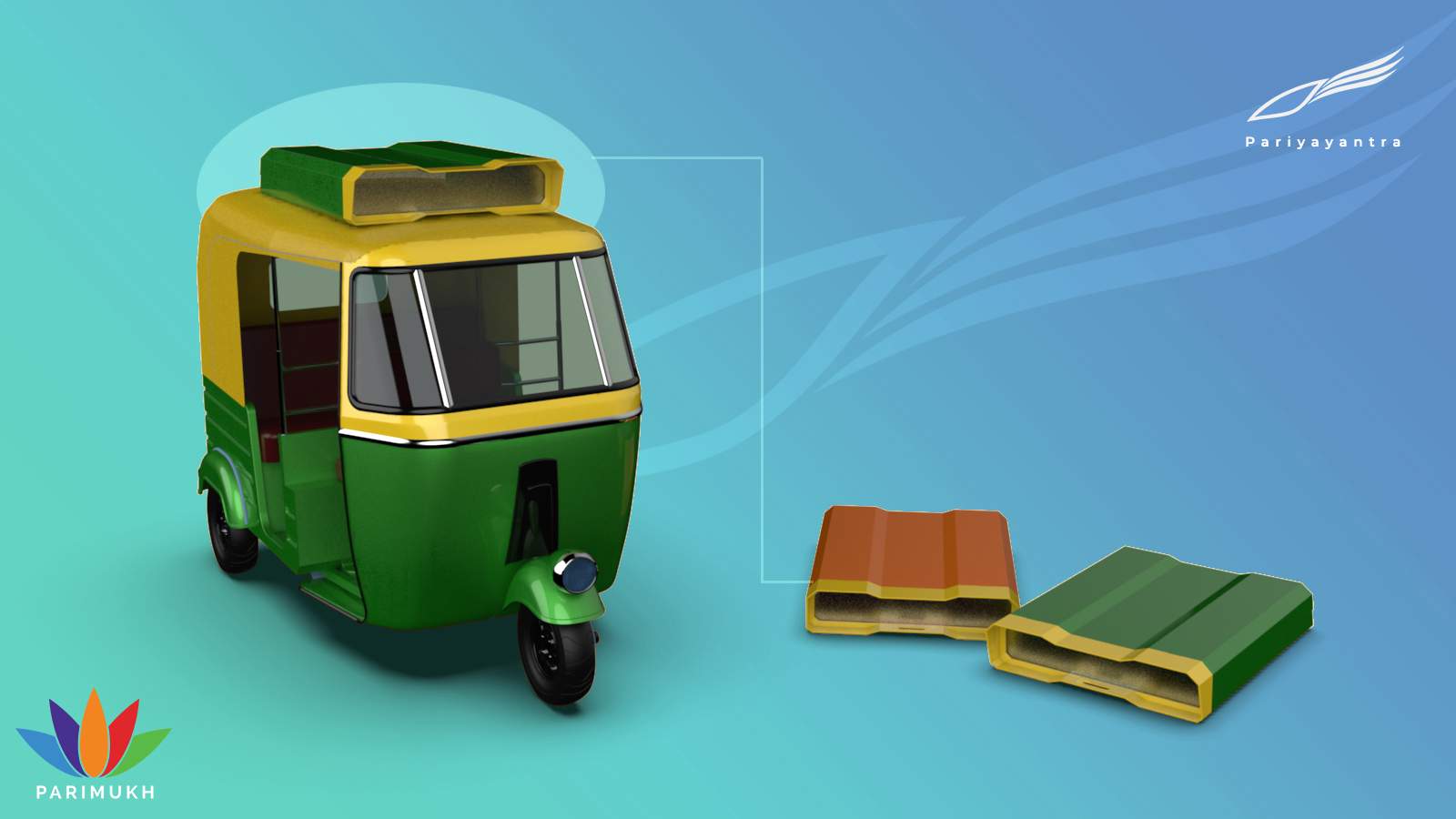 Clean air don't care: The air filter units will be mounted on the roof of any vehicle — buses, cars, auto-rickshaws, and even two-wheelers

"Because it was for outdoor pollution we had decided it will be implemented on a larger scale and we could require heavy motors and electricity connections. We conducted several experiments and calculated the power and the machines required for the entire city. The amount of electricity to run these motors obviously turned out to be huge. We got demotivated and realised that we would require other power plants to generate that amount of electricity. So we finally dropped the idea. However, one day when Dr Gill was travelling in his car, and he kept the window open, he felt the flow of air and wondered why we can't put an air filter in the vehicle itself. He said that the power consumption that is required to run the filters will be nullified because that is being fulfilled by the movement of the vehicle," explains Amit.

They began test runs on their college buses, however, the initial model needed a lot of modification. After five modifications, adds Amit, their model was good to go. " We were confident that the filters wouldn't be harmed by storms, heat or rain, and they will be protected for every season," he says. "We applied to CPCB a year ago, but it only got approved this year as there was a debate about the technology. It was finally flagged off yesterday. Our college and school buses are already fitted with the filters and they are scheduled to run for 100kms a day. Every month we will be having a meeting in order to check the progress, the issues regarding the filter, and thus evaluate on a monthly basis for a report to be submitted to CPCB after six months. They will then decide on the growth of this project," concludes Amit.