We take a look at how Bengaluru's heritage Fort High School is staying resolute — holding classes — despite the bad state of the buildings, which are now being restored by an INTACH team

Chamrajpet is one of those areas in Bengaluru that has a lot of history associated with it. From the famous Tipu Sultan's Summer Palace to the Minto Eye Hospital, Victoria Hospital and the Fort High School. there's plenty to learn about and look at. Though the State had an acute fund crunch and couldn't help restore the 112-year-old school, originally built by the erstwhile Maharaja of Mysore, Fort School has finally begun getting a much-needed makeover.

The Bengaluru chapter of the Indian National Trust For Art and Cultural Heritage (INTACH) came forward to work on restoring this school. Taking us back to when they first set their sights on this project, Aravind Chandramohan, Co-Convenor, INTACH says, "Six years ago, when we were restoring another structure in Bengaluru, we got to know about the Fort High School. We visited the school and found out that it was in a pretty bad state. However, we did not know whom to approach and what to do to restore this building. There was no response to the letter that we had written to the government. Days just passed by but we had it in our mind that we must restore the school, no matter what." 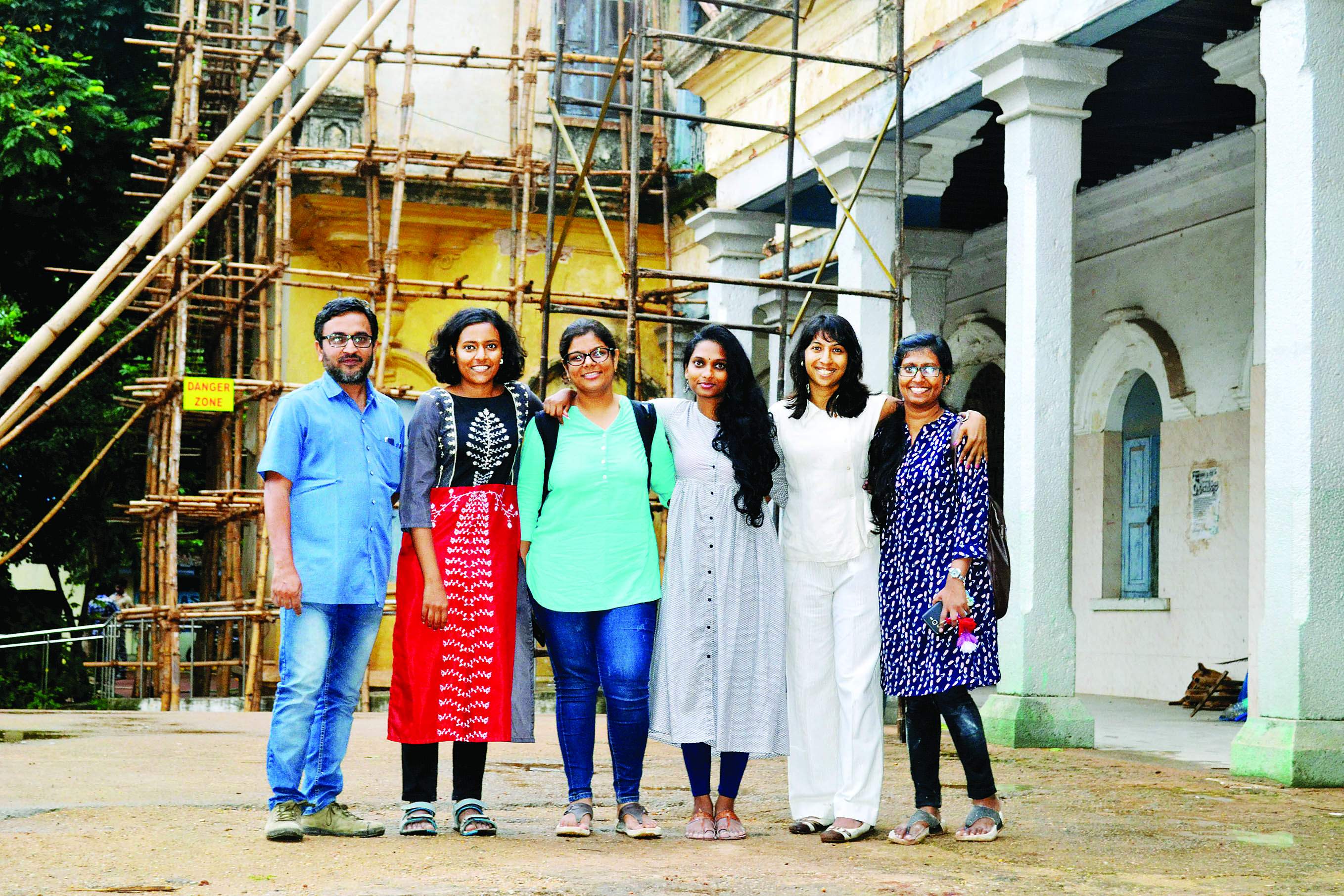 Team Work: Members of INTACH team who are working for the renovation of the Fort High School

And then they decided to take a shot in the dark. Hope and money, like a lot of things, come from strange quarters, "When we had put up a photo exhibition called Bengaluru Then and Now of our work on restoring heritage structures, a photograph and a small description of the school was also included. Fortunately, we found a donor who came forward to fund the restoration of Fort High School. As per our plans, the restoration could be carried at the cost Rs 2.4 crore which includes the labour, materials and much more," said Aravind.

Built in 1907, the Fort High School stands on three acres of land gifted by the then Mysore King Krishnaraja Wadiyar IV. The king's dream of setting up an English School came to life when Fort High School was born. Though the Government had approved of a renovation proposal there were no funds forthcoming. "Last year, we finally obtained permission from the State Government for restoring the school on the condition that we should not ask for funds from them. It was on April 19, 2018, that we got the project inaugurated by Yaduveer Wadiyar, who is the king of Mysore," he explained. Unique Feature: The Polonceau Roof Truss was one of the most successful designs of the 19th century

Sonali Dhanpal, who is a conservation architect, has worked with INTACH on this project. She takes us through their process for this project, "We do not simply restore the heritage structure. A lot of documentation work is done to uncover the history of this place. Through our research, we were able to find that in 1791, the British martyred soldiers of Tipu Sultan in the Third-Anglo Mysore War. Later, during the Wadiyar rule, a southern gate of the present Bangalore Fort was built here. According to historians, though the Mysore King donated this land to build a school, a lot of rich families living around the area also donated money for the infrastructure so that their children can study in this school."

With a view of giving an opportunity for children to learn whichever language they preferred, the king introduced regional languages like Kannada, Telugu, Tamil, Urdu, Persian, Sanskrit and Hindi along with English. Hence, it was the first Anglo-Vernacular school in the Mysore Kingdom and the state.

Words are not enough to describe the beautiful structure that has elements of European and Indian architecture. While the front elevation of the school ceiling looks decadently English, a courtyard surrounded with classrooms on all the sides is typically Indian. Roman arches on the openings of a window, sloping roofs with Mangalore and Madras tiles and the Polonceau Truss, which is nothing but the intersection of eight ridges, all of which add to the heritage of the school. Old is Gold: While one part of the building has Jack Arches, the other part has Madras Terrace

Pankaj Modi, a conservation architect who has been working for more than twenty years with INTACH says, "It is not an easy task to restore heritage structure. It took us a year to document what materials were used in the construction of the school. During our research, we were able to find that the building was built in two different phases. While the first phase was built somewhere between 1905 and 1907, there is no document to show the date when the second phase was built. We could only make it out through the materials used and the method of work involved." Despite their intense research, INTACH was not able to find the name of the architect who built this school.

Unlike others, INTACH neither uses cement to cover the cracks on the building nor do they use plaster. They use only lime mortar or lime water to cover the cracks in the building. Pankaj says, "Lime is naturally occurring, less susceptible to aging and adjusts to the variations in temperature. It is also less prone to cracking. In simple words, it allows the structure to breathe. Some wooden planks on the Madras terrace are still strong which will remain the same. The broken ones will be replaced with teak wood and also painted. The red tiles on the roof are being replaced. We are not going to make major changes in the building. The structure and ornamental designs on it will remain the same. We will only repair or alter the damaged parts. Essentially we want the building to remain intact and safe and get back to its glory."

We're going on and on

Amidst all the chaos of restoration and experimentation in the building, the teachers and principal have made it a point to run the school for children from class VI to X. Fort High School, which was specially built for boys opened its gate for girls too.

Chandrashekar SC, the headmaster of the school, says, "We have 27 classrooms and I feel that this is the biggest government school in the city which has a computer lab, physics lab, a chemistry lab and a library for children. Until last year, the first floor had classrooms where Pre-University College classes functioned. Once the restoration work was taken up, the college students shifted to another building — New Fort College. Only, the school children remained with us. Last year, the school strength was 160 and this year, we went door to door asking parents to send their children to school. Thus, the strength of the school has increased to 200 children. Around 15 teachers are working with us. Once the restoration is completed, we want more enrollments to happen for which we will distribute pamphlets and try to convince parents to send their children to school."