Though we study so much about every country's freedom struggle and the many wars fought by kings and queens in History class, do we really know that much about India's role in World War I and II? Except for one or two concise paragraphs, that too in the last chapter, about how Indian soldiers were forced to be a part of these two wars, we don't read or hear about much else. To lift the veil of ignorance, ReReeti, an NGO in Bengaluru, has been organising an exhibition titled Entrenched across various schools in Bengaluru since June 2018. The travelling exhibition is being conducted to commemorate the 100th anniversary of World War I and to remember the millions of Indian soldiers who were forced to participate in the war by the British with the assurance that they would grant India freedom.

When we asked Tejshvi Jain, Founding Director of ReReeti, why she chose to hold an exhibition to commemorate World War I, she says, "It is very important to educate kids about our soldiers and the sacrifices they made during the war by fighting for the Britishers. There were many men who participated from both North and South India and I would wonder why there was no mention of them in our History textbooks. This led us to take up a project on WWI and help make school children more aware of the contribution of Indian soldiers." So, why Bengaluru schools in specific to showcase this project? She explains, "If you read our History textbooks which serve as a large learning resource for school children, there is only a mention of soldiers and their regiments from North India. But in reality, even Bengaluru and other parts of Karnataka, especially Mysuru, has a rich military heritage. Like, for instance, last month, it was the 100th anniversary of the Battle of Haifa in which thousands of Mysore Lancers participated. Many children do not know this, but through our workshops and other activities, they will know now." 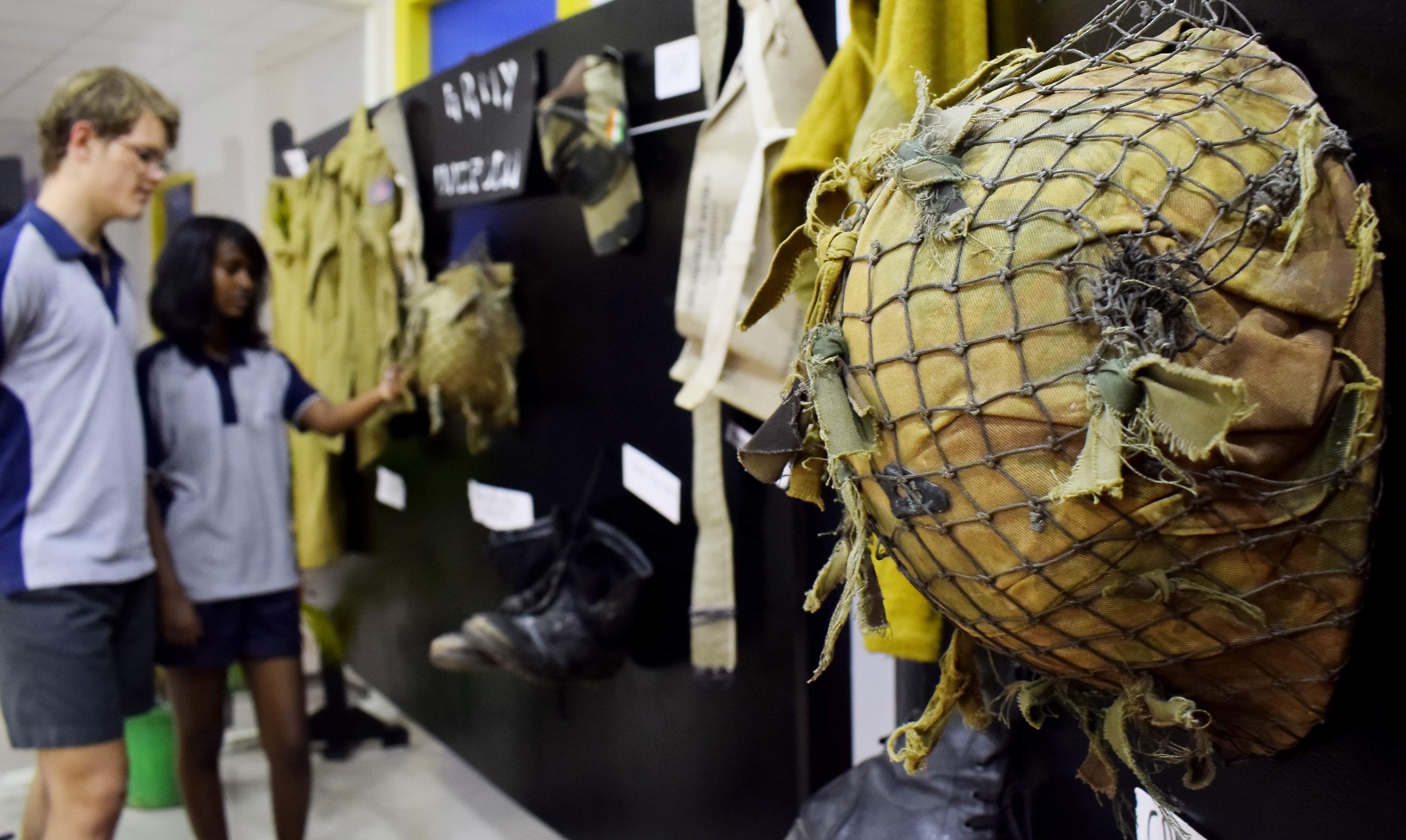 Warfare: ReReeti organised an exhibition recently at Trio World Academy. Students too contributed some objects that were similar to the ones used in World War I.

ReReeti started the project by conducting workshops, field trips and critical thinking sessions for children on the impact war had on the country and the families of the soldiers, the usage of weapons and the violence that followed and much more. During their sessions, they discovered that many children play video games which again involves violence, guns and killing people. "A few months ago, we were wondering how to make the exhibition interesting so that it stirs a sense of curiosity in children and they might want to know more about it. Then we remembered that soldiers then and even now are provided with those huge trunks where they can store their things. How cool would it be if a child discovers medals, uniform and letters in a trunk and calls his grandfather to find out about these things and whom they belong to? This is how we began telling stories through our exhibition," she explains.

And what's the best way to appeal to children's interest? To get into their minds, of course. Since the project was meant for school children, the team at ReReeti decided to involve students — 90 of them from Vidyashilp Academy, Army Public School Parachute Regiment Centre and St Joseph's Boys High School — in the curating process. "We do not display the original objects used during World War I due to security reasons, however, all the panels that have been put up in the trenches are self-explanatory and the concept is quite original. The dialogues, panels and content have been co-curated along with these students," she says. Aside from the contributions of the chosen 90, every time ReReeti conducts an exhibition in a school, they give the students a chance to involve themselves so that they too can contribute and display objects from World War I. 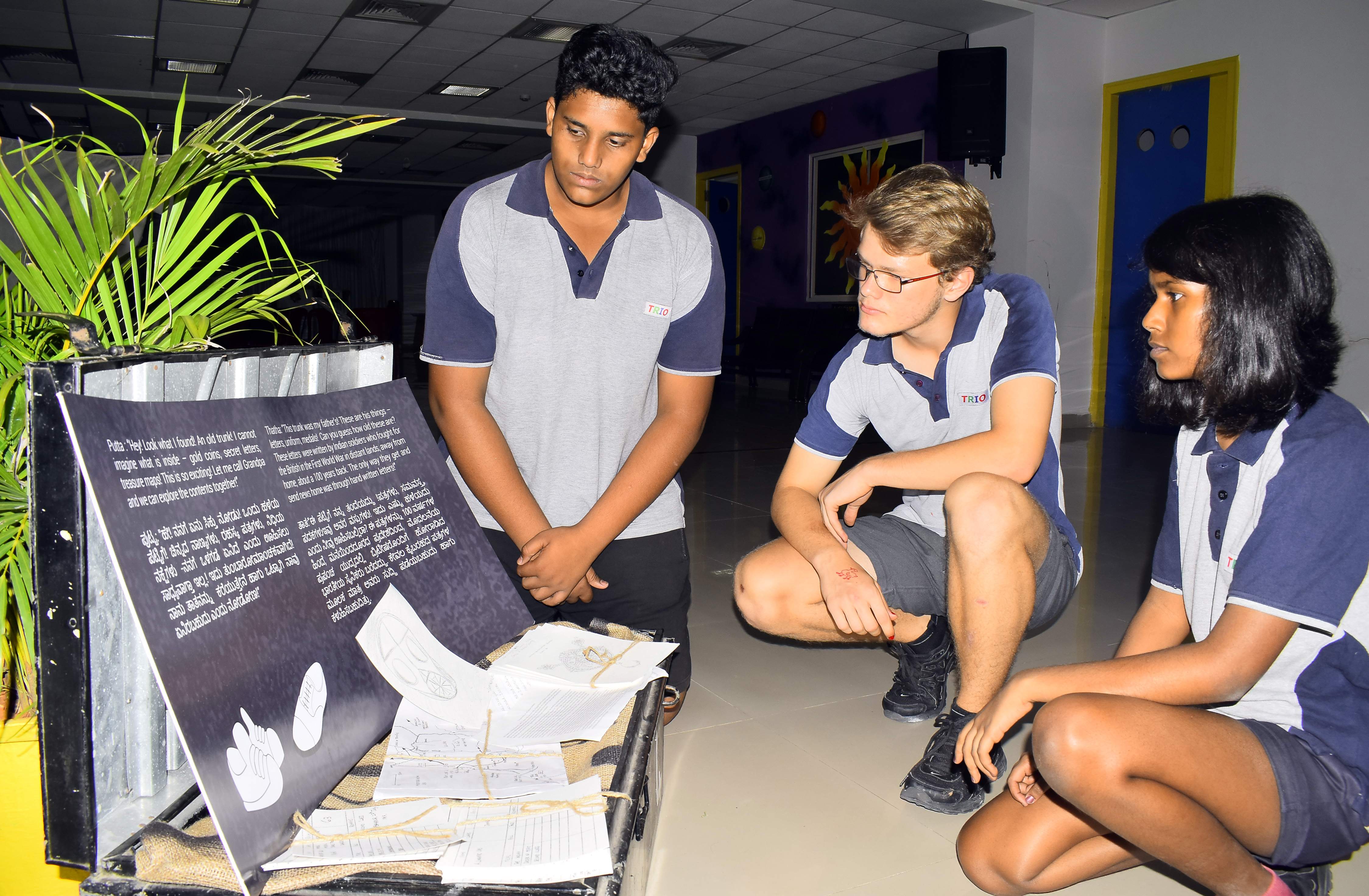 Trunk of memories: Students observing a huge trunk that contains old letters and and other objects.

ReReeti has been receiving an overwhelming response from students, teachers and parents. "Parents and children have given feedback that if the school had taught them History using this method, then they would not have struggled to remember dates and places of incidents," Tejshvi says. Thus, through Entrenched, ReReeti has tried to reach as many students possible. Till date, they have set up the exhibition in more than five schools and they have nothing less than ten schools on their list in the future.