Clint, a child prodigy from Kerala had completed 25,000 works of art before he passed away

35 years after his passing, we trace the life of Edmund Thomas Clint and the world of art he has left behind

I wonder what it was like to have seen the world through Clint's eyes. The world lost Edmund Thomas Clint on April 15, 1983, less than a month before his seventh birthday. 35 years have since gone by and the first I have ever heard of Clint was at an art programme organised by URU Art Harbour in Mattancherry. Dubbed ‘Art Picnic’, the programme has brought together children from local homes to explore their inner artist by painting on walls or wherever they pleased. Typical Mattancherry scenes. But the walls were covered with pictures that called for deeper exploration.

I had to know more about this child (described as a child prodigy on the Kerala tourism website) who had completed 25,000 works of art before he passed away due to kidney failure. I tracked down Clint's parents, MT Joseph, a retired government officer and Chinnamma Joseph, a former teacher, who were delighted to welcome me into their home. "We always wanted a daughter," Joseph told me as I made my way through a path of yellow flowers that Clint's mother carefully lays on their doorstep every day to welcome their son. I had just entered a shrine for the prodigy. 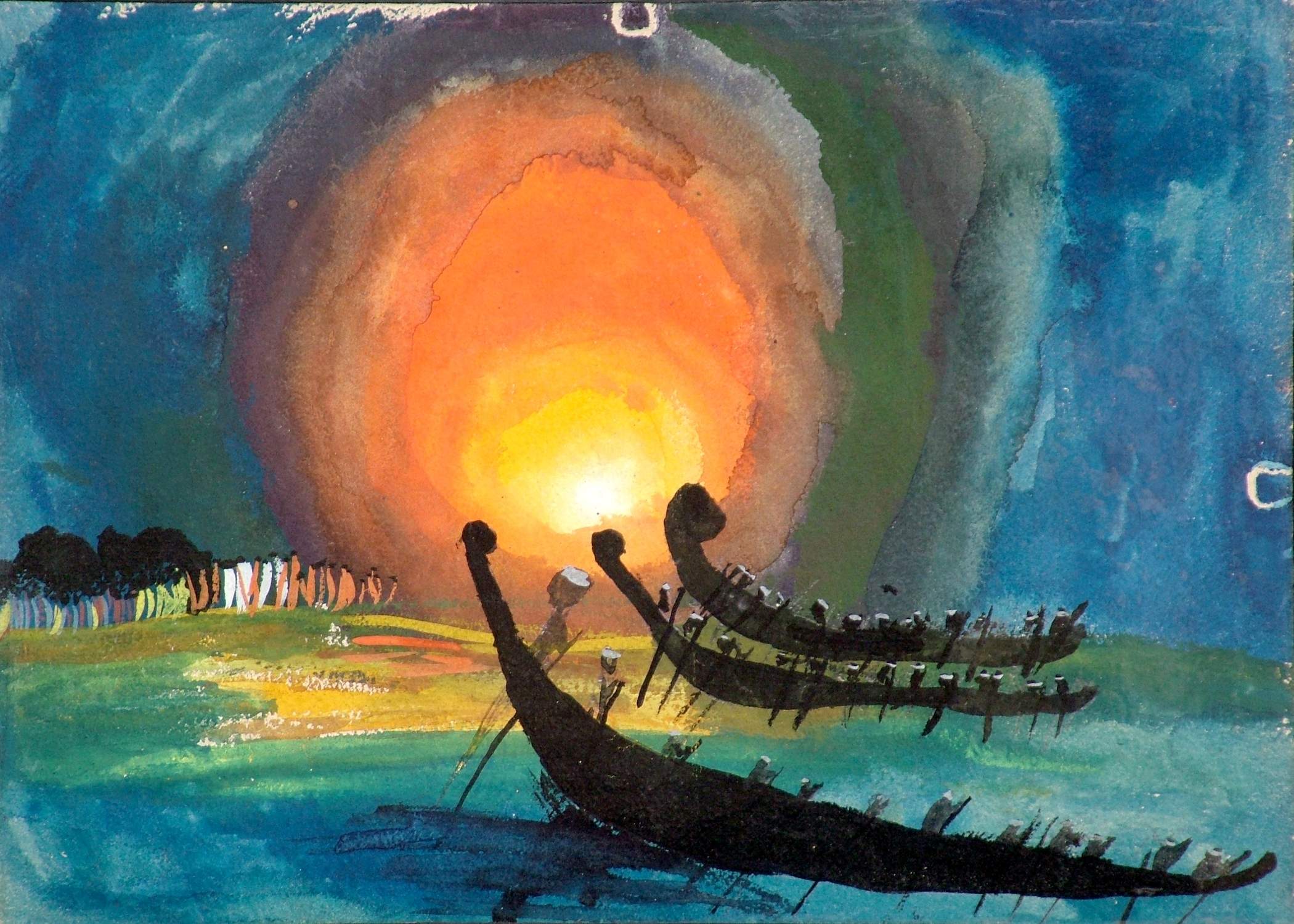 Moving stories: Experts say that Clint's art is always larger than life and in motion

"It was just the three of us at home. Clint was just 6 months old at the time," begins Chinnamma. "I would find him using pebbles on the ground to make drawings on the floor. So, we bought him some chalk and he would draw little patterns everywhere. One day, I found that he had drawn a large circle across the front of the house. We were wondering how a child was able to do this, so we watched him for a while. He was lying on his back and spinning to create a perfect circle with the length of his body as the diameter," she says, the amusement had barely left her face.

"No one in our family is an artist; we knew nothing about art," says Joseph, "From the little we knew, the greatest support we could give him was to not stop him." Although the young parents only regarded it as a pastime at the time, Joseph's friend Mohan was shocked when he found a wall covered with art at their house. "He told us that it was the work of an artist and asked us to buy Clint everything he needed and to never stop him," he adds. 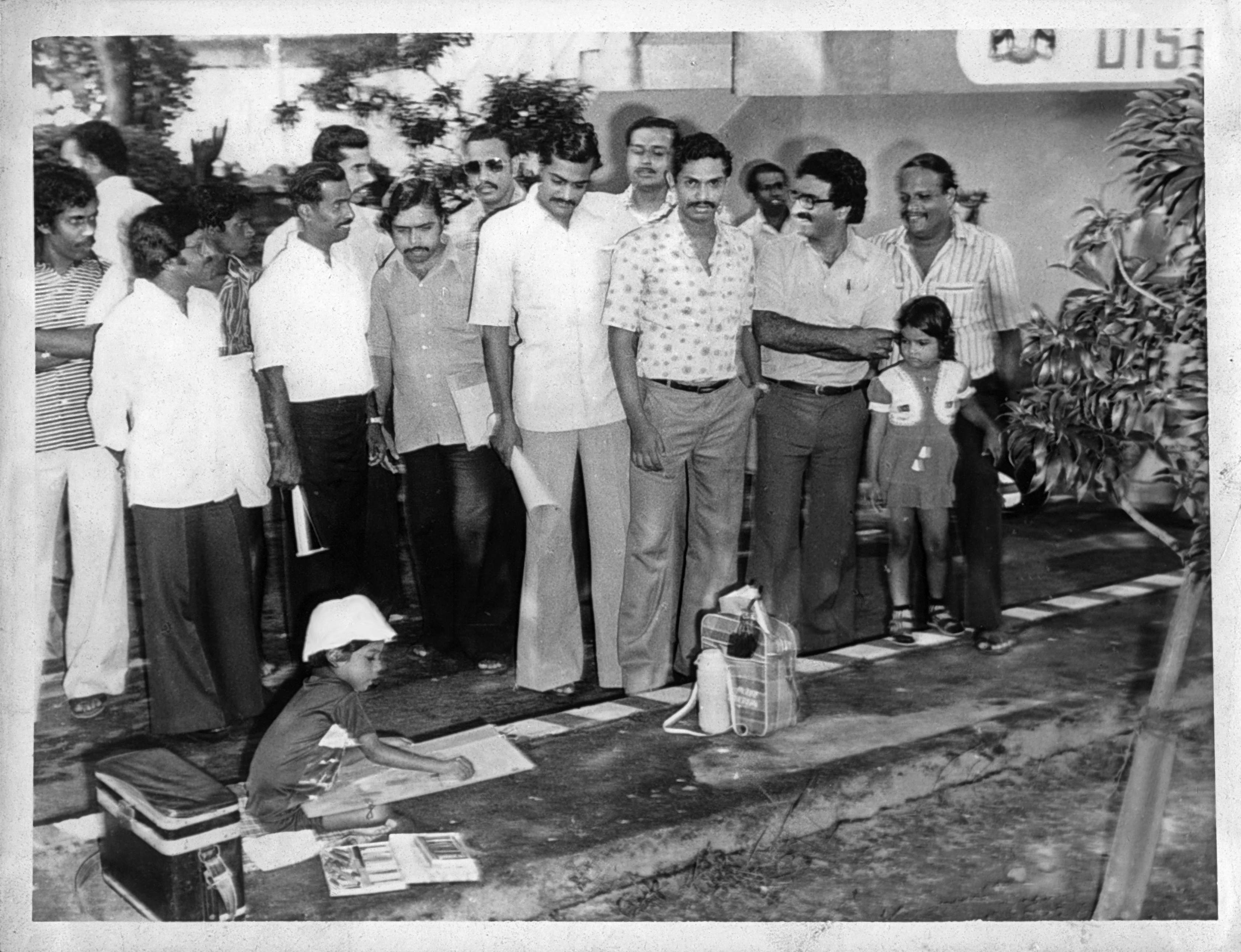 Brush past: Clint during his first competition in the Children's Park in Ernakulam

They bought him all the art brushes and paints they could afford. Joseph's co-workers collected half-used stencil papers from around the office for him. "Clint just kept drawing," remembers Chinnamma fondly. "The first things he drew were clothes hanging to dry outside the house and the Indian-style toilet in our old home. He would draw whatever he saw around him. If he needed us to buy him something, he would draw it for us on a piece of paper. It was his language," she says. Joseph nods and adds, "We didn't know how great his talent was. Our home wasn't like other homes with little children. There was no crying or screaming. His life was all about art."

When Clint joined school, the magic spilt out of their small home. "Children would gather to watch him at work. Everyone knew him as the kid who draws — people on the street, at school and everywhere he went,” remembers Chinnamma. "His first competition was at the nursery level at Children's Park in Ernakulam. He was four and we knew nothing about it," she says. Clint had never laid eyes on watercolours before and the family was shocked to see children expertly painting with them. 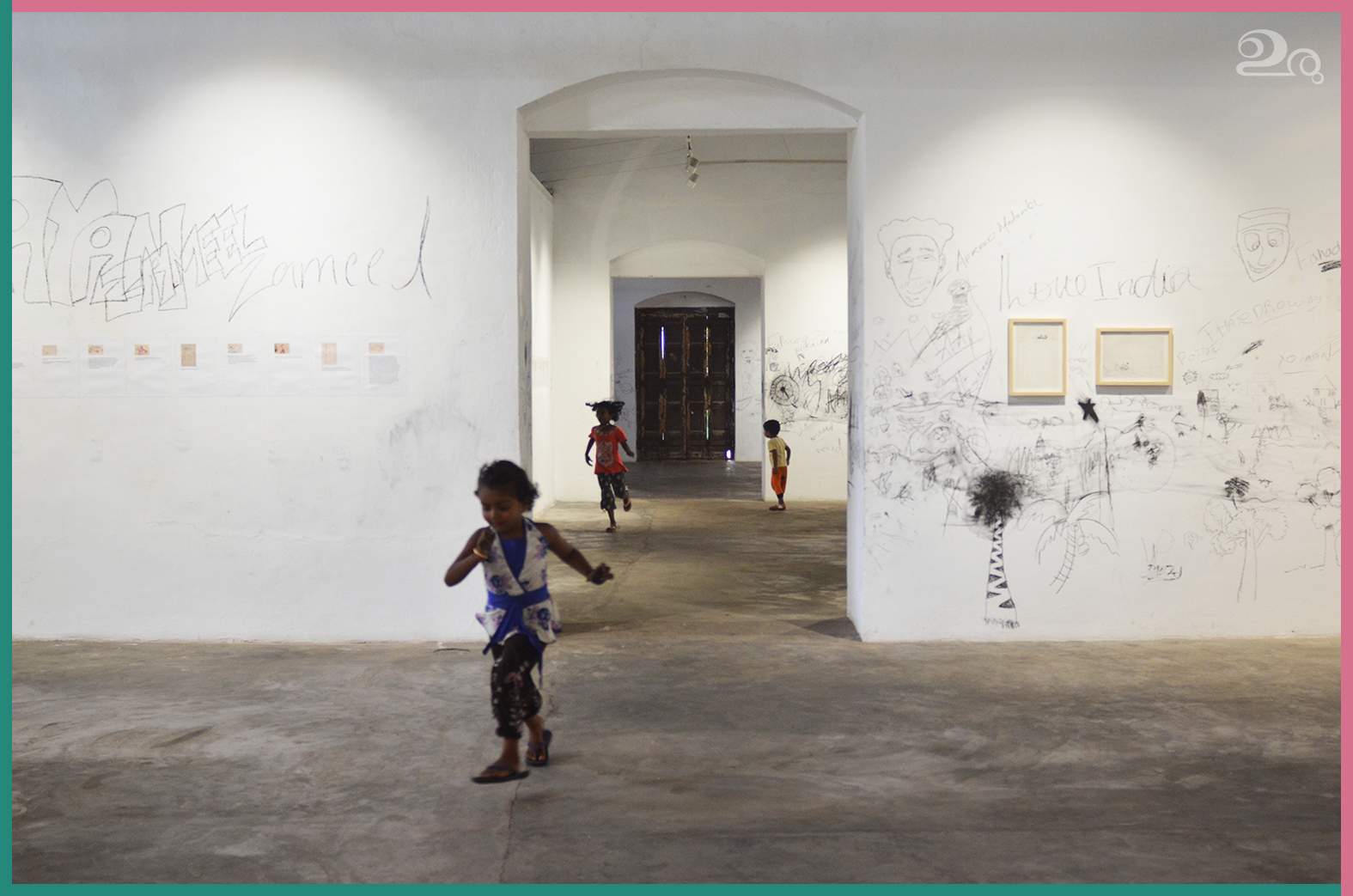 "A crowd had gathered around Clint," recalls his mother, "I was afraid that he would suffocate. But Clint had seen none of the people around him. He just kept drawing. And he won the gold that day!" Clint's favourite uncle, Mohan bought him his first watercolour set that night. "We took him for a competition the next day. We didn't know how to show him the way to paint with watercolours. At first, we asked him to practise with paste, but he said that he could do it," recalls Chinnamma.

"That was the first time he held a brush and painted and he won first prize," recollects Joseph, "There were crowds gathering again and they even made a huge hullabaloo. He didn't know that he wasn't supposed to use water and his painting looked as though someone had carved it in. People thought that it was some advanced technique and that someone else had done it. They were in disbelief." But the growing crowds around him never perturbed Clint. "When he won, they carried him up for the masses to see; he was so tiny. And he was competing against 18-year-olds. That is how it began. And that was his last real competition," says Joseph. 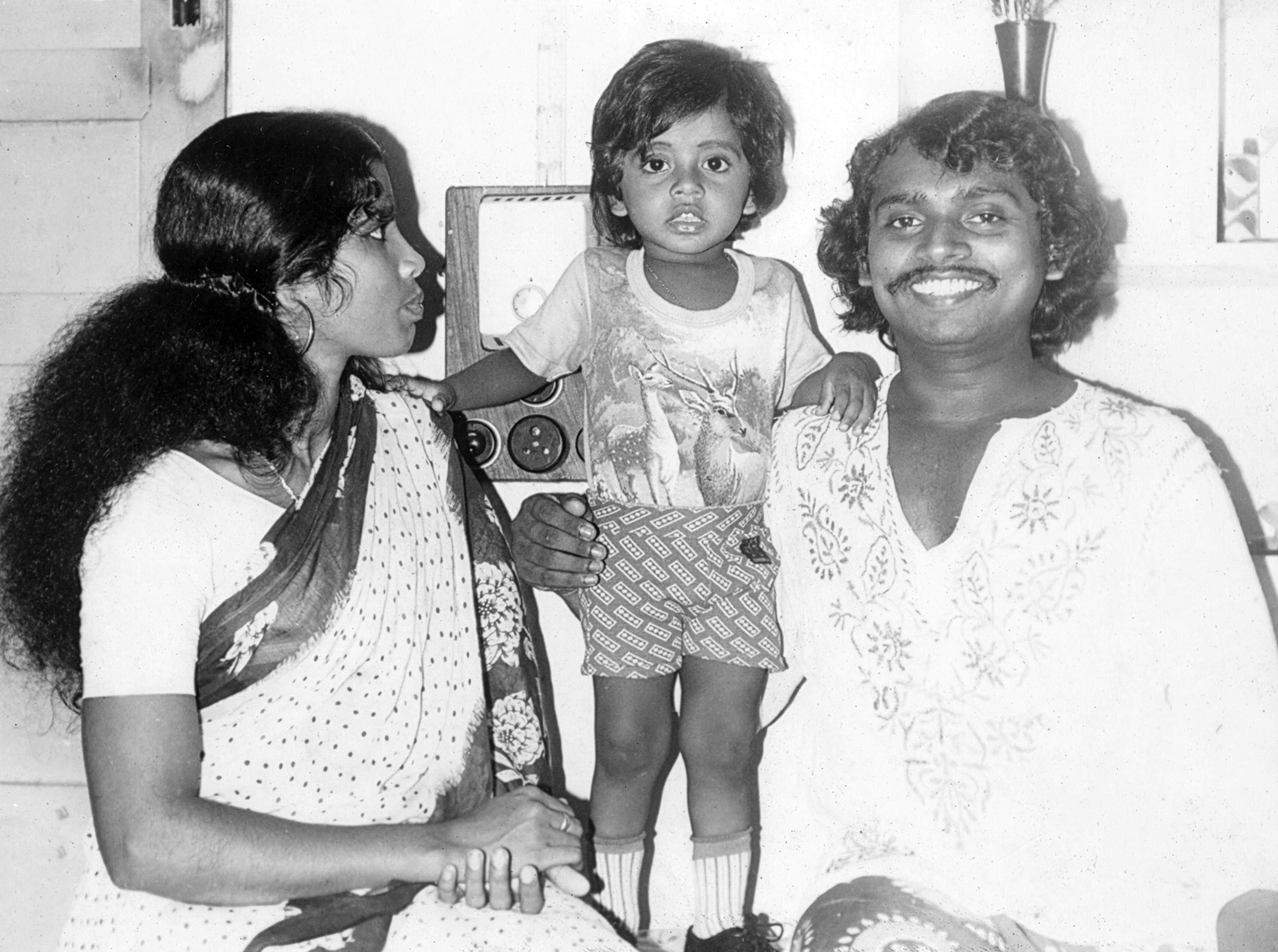 Home-grown: Clint's parents made it a point to never question him

A lot of the magic around Clint came from his parents' ability to understand him unconditionally. "At home, it was our world; we would never try to change who he was," explains Joseph. "He learned to read and write Malayalam by the age of 2 and English by 4. We would be working and he would be devouring the dictionary in the other room. We never refused him anything and he never asked for more than he deserved," he adds, "We didn't want to lose him in a fight for religion, so we never made him follow a particular faith. We didn't want him to pray for something and never fight for what he wanted.”

Joseph's voice trembles as he goes on to say, "There is no other character like him, he was the only one." Chinnamma adds, "He would paint his dreams into life. It's truly how he would speak to us.” "We used to ask Clint to become Picasso. He would laugh it off. He didn't want to be famous, he just wanted to be like his Mohan uncle. All you could find him doing was drawing, reading, sleeping or eating. He would neither laugh nor cry. I can't remember a single time he has burst out laughing like a child," says Joseph with a fond smile. 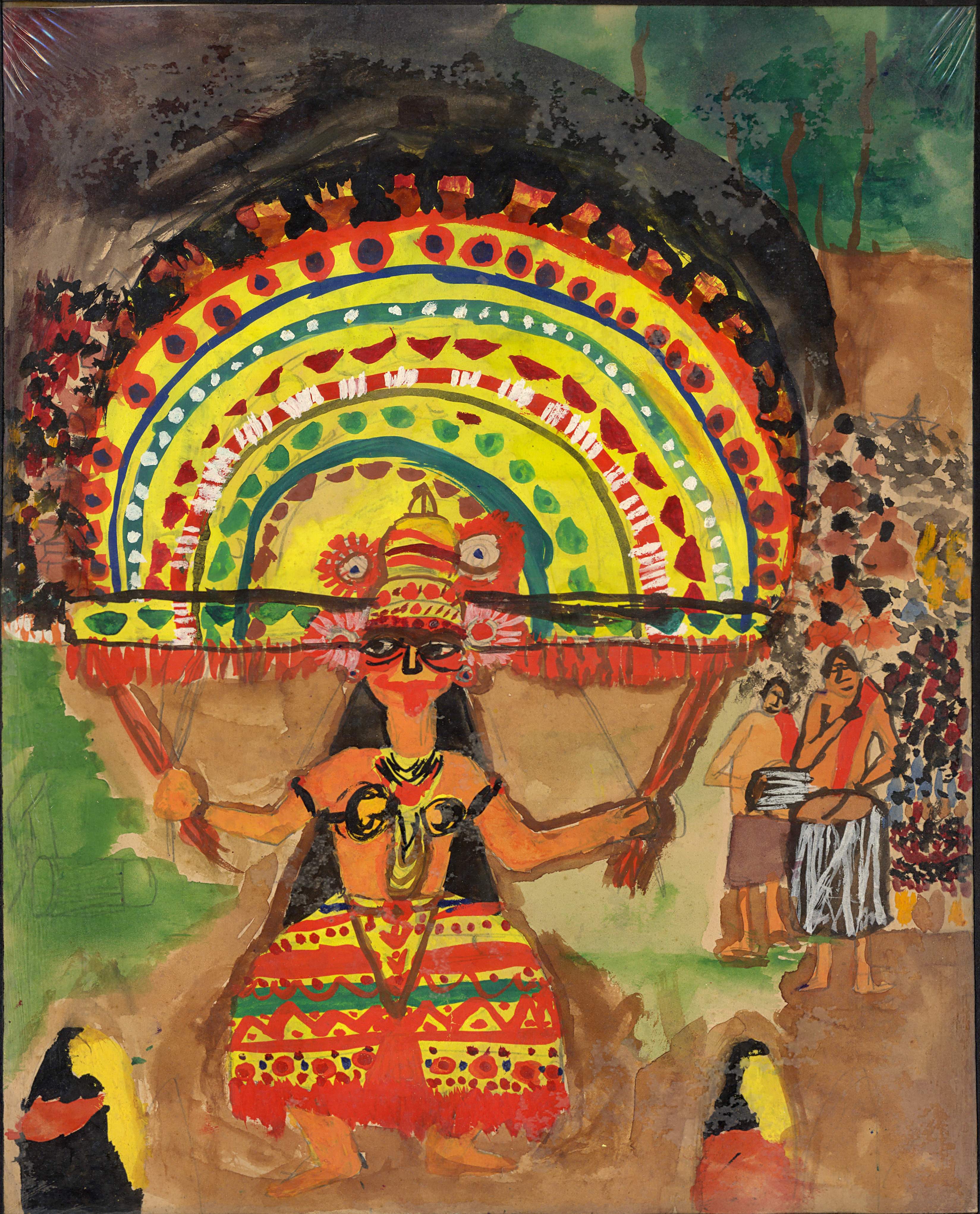 Drawn in: Clint's last painting was a recreation of Theyyam, a ritual art form

Clint's mother's house is in a village called Manjumala in Idukki. Clint was used to frequent bus journeys over the hills. "He would remember everything he saw on the ride: all the normal things like the factories, tanker lorries, people climbing them with ladders and all the shiny lights. Whatever caught his eye would make its way onto his pages," remembers Chinnamma. One such journey inspired his last drawing. Clint observed Theyyam, a ritual art form taking place in a temple. A month later, he recreated it with stunning detail in his notebook.

Chinnamma recollects a memory that continues to stand out for her. Clint was busy playing outside of their house with the neighbourhood children. Suddenly, he burst into the house and asked her to make sure that she saves all of his work in a special place. She explained that that would be the job of his children and grandchildren. He solemnly agreed and went back outside to play. "We are only realising our loss now," says Joseph, "There has not been a single night where we have been able to sleep peacefully since."

Clint always questioned the acts of God. Once he asked his father, 'If God knows everything, why does he always end up making such colossal mistakes?' I can't help but ask the same question after having seen each of Clint's carefully preserved works of art in his parents’ home. I wonder what it would have been like to see through those eyes. But it's impossible to imagine a world where Clint would've survived, perhaps because he seems to have grabbed most of its beauty in his passing.