Who said solo travel in India is only for boys? Presenting Esha Gupta, who is out to negotiate every rough terrain on her Avenger motorcycle to prove that Atithi Devo Bhava stands true even today

Out to explore every bit of India and challenge the stereotypes associated with women travelling alone, Esha Gupta is carving a path of change. After four years of solo biking through the Golden Quadrilateral and various cities, the Bengaluru-based woman biker is now exploring the unexplored terrains of India’s Northeast. With every ride Gupta takes on her trusted Bajaj Avenger that she has fondly named ‘Mikey’, she has been emerging as an inspiration for many women who are passionate about travel. “I want to see more women bikers on Indian streets,” says 38-year-old Gupta, who also aims to popularise the biking culture among women.

It was in 2011 that Esha Gupta, a hotel management graduate, quit her job and began her journey as a traveller. She is the first woman biker to have completed the Golden Quadrilateral

Solo crusader
A hotel management graduate, her journey as a traveller started in 2011 after she quit her corporate job to pursue her passion — travelling. Two years later, she decided to cruise solo on her bike after the Nirbhaya incident shook the nation to prove that India is not as unsafe for women as it is projected to be. Assisted by members of the Bajaj Avenger Club spread across the country, Guptacovered 20 cities – 6,000 kms along the Golden Quadrilateral — in 40 days on her mean machine. “There is a wrong perception that India is not safe for women through media reports and word of mouth. But one finds incidents of misbehaviour, eve-teasing, rape everywhere... no country is completely safe. A Nirbhaya case does not mean that women are no longer safe in India. I just wanted to show all through my trip that the situation is not that bad. As a solo traveller, I want to tell people that I have had ten good incidents instead of one bad one. Throughout this journey, I came across many people who have a heart,” says Gupta. 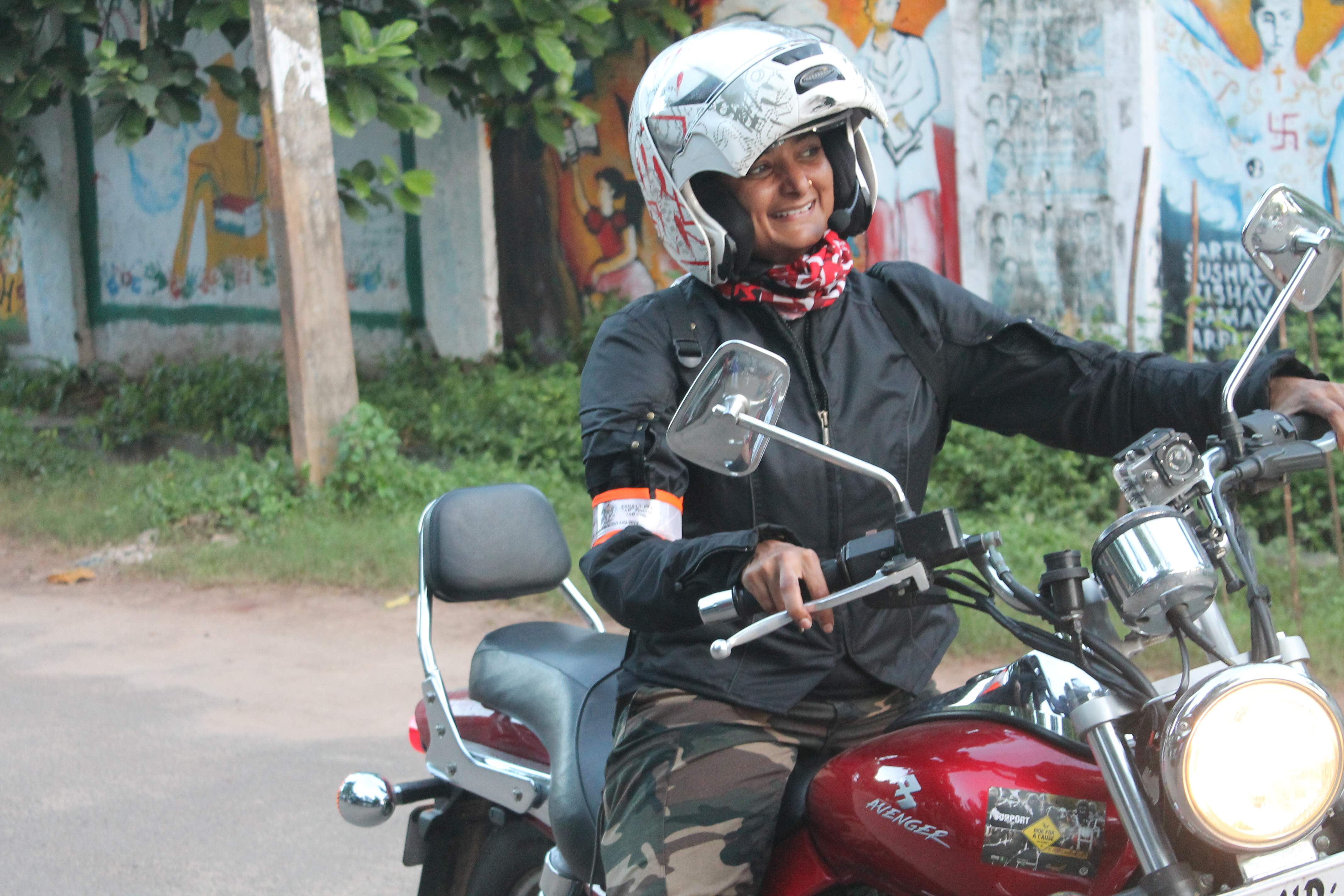 Best companion: Gupta on her trusty Bajaj Avenger that she refers to as Mickey

Last year, Gupta secured records in the India Book of Records, Asia Book of Records, Limca Book of Records and the Golden Book of World Records for her solo India ride titled 'Beautiful India: Celebrating Being Indian'. She clocked 32,000 km across 16 states in 110 days. “I travelled to many cities in the country, but deliberately skipped the Northeast because that needed another trip altogether. This year’s ride is an extension of the ‘Beautiful India’ ride,” she says. The journey began on February 25 and she intends to complete by June.

Difficult terrain
The ride through the Northeastern states is challenging, considering the unpredictable weather conditions along with the difficult terrain. Even though she planned her ride, Gupta has hardly been able to stick to it. “The weather changes every hour here so it’s difficult to plan one's rides. One minute it’s sunny, another minute it's cloudy, suddenly cold, and suddenly pleasant,” says Gupta, whose first pitstop in the region was Sikkim. There are several hidden treasures in the region that she intends to discover through the journey. “Sikkim has been extremely beautiful and I have been fortunate to witness Kanchenjunga in all its glory. These places are so breathtaking that it forced me to stay back for a few extra days even though I planned to stay in each city for just one day,” she says. Although she's covered 400 to 500 km on her bike in one day during her previous rides, this time, she has limited the distance to 100 to 150 km per day due to the terrain.

Finding the locals extremely cordial towards strangers, she says, “I entered Sikkim with people greeting me with smiles. The rustic charm about this place is still there and there is a lot to learn from people here, be it conserving nature or helping others,” she says, adding there has been negativity towards people of Northeast in some parts of the country and her solo ride is meant to shift people’s focus to the positivity and goodness that exists in this part of the world.

Gupta, at all times, has a GPS tracker with an SOS button around her neck, plus, her bike is fitted with a GPS device too

Travel tales
Travelling, she feels, has made her a better person. “It’s like a new book every time and each place I visit is a different chapter that teaches me something new about life,” says the female motorist. She recalls how an elderly woman selling tea at a roadside stall in the Bhadrak district of Odisha suggested that she enjoy life by travelling independently, contrary to the educated women in her Bengaluru neighbourhood who asked her to stop biking and settle down in life. Then, there are people who helped her with food and shelter after hearing about her journey.

Her biggest strength is her fearlessness, she believes. “There have been instances when people have told me that they find it difficult to make out if it’s a boy or a girl riding solo, considering I wear leather jackets and cargo pants. But this time, I am carrying a patiala suit with me, which I often wear while riding to make people comfortable with the idea that women too can bike,” she says. So, how challenging has it been so far? “Considering the fact that biking has always been considered a male domain, there have been roadblocks like people staring or chasing her the moment they realise it’s a woman behind the handlebars, but that does not make the journey more difficult. In fact, I have got more thumbs up than stares from people on the road,” she answers with a smile. 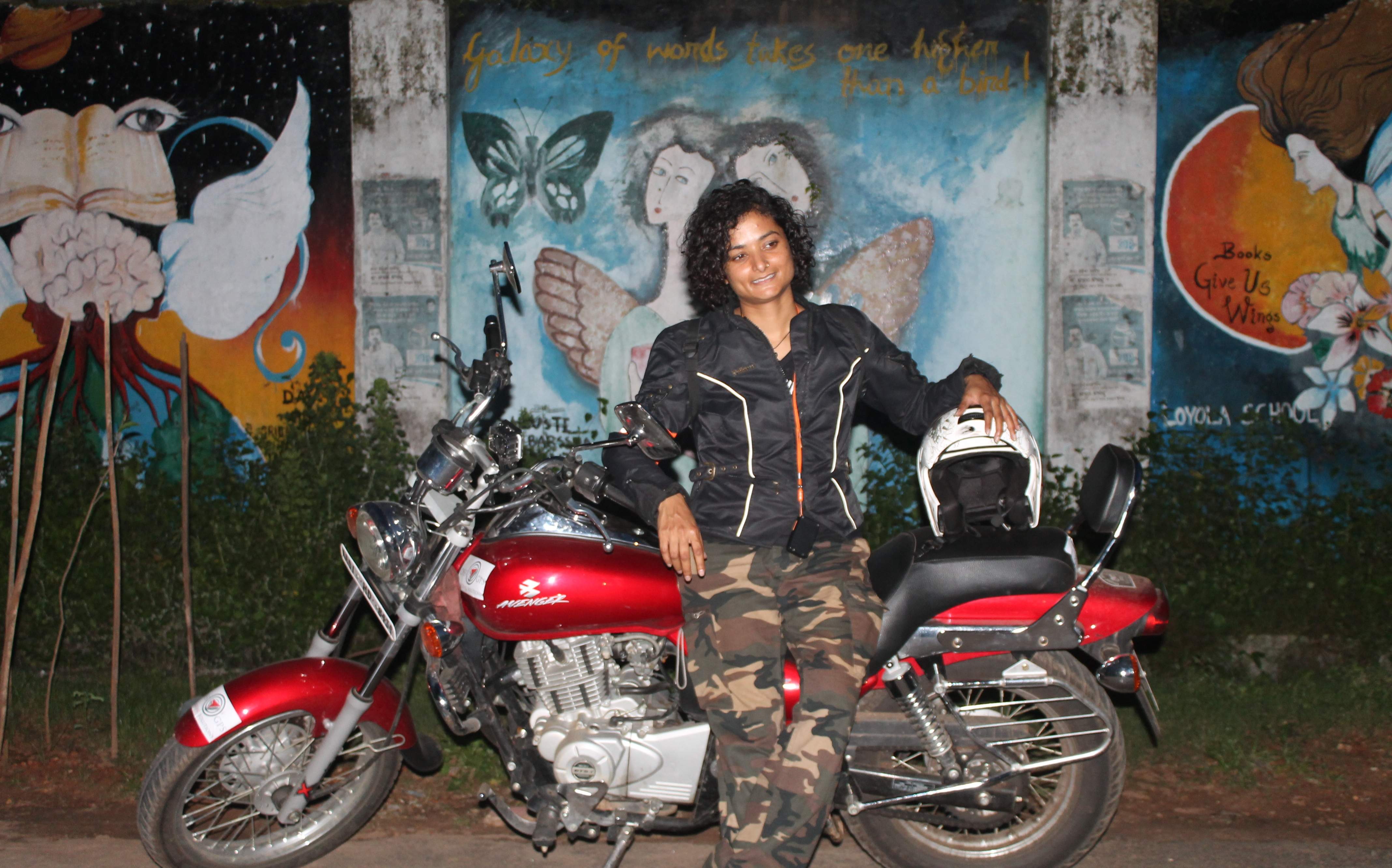 Pose right: Gupta, who is originally from Bengaluru, is an avid traveller

Choosing Mikey
It was her Ladakh trip in 2013 that prompted her to buy a bike in February the next year and embark on solo bike rides. “The Nirbhaya incident was in the news then. I met some foreign female travellers who have been coming to the country for the last 30 years. They told me that they do not find India to be that dangerous, rather it is a bright beautiful country, a heaven for travellers. Sadly, the focus of our media is just on the negative side,” she says.

While she carries a GPS tracker with an SOS button around her neck, so that her friends back home know her exact location, her bike is also fitted with a GPS device. She does not travel during nights and has equipped herself with the knowledge of bike repairing techniques. Although some of her travels are sponsored by biker clubs, she began the journey with savings from her corporate job.

And she chose an Avenger over a Bullet because of her height. “It took me several months to decide on the Avenger. Weighing 157 kg, this one suits my height. I can at least take care of it myself if it breaks down in the middle of my journey,” says Gupta, who is just a little over 5 feet tall. After she bought Mikey, Gupta completed 1,000 km on a three-day monsoon ride as the only woman rider with Bengaluru Avenger Club, covering 20 towns in Western Ghats, a solo trip of 1,955 km covering Bengaluru, Mangaluru, Udupi, Gokarna, Goa and Shimoga and a 4000 km solo trip to Masinagudi, Ooty and Coimbatore. “The fifth day after I bought my bike, I took a 1000 km ride to Coimbatore along with my friend,” she recalls. “I am not passionate about bikes, but I am passionate about biking,” Gupta adds. 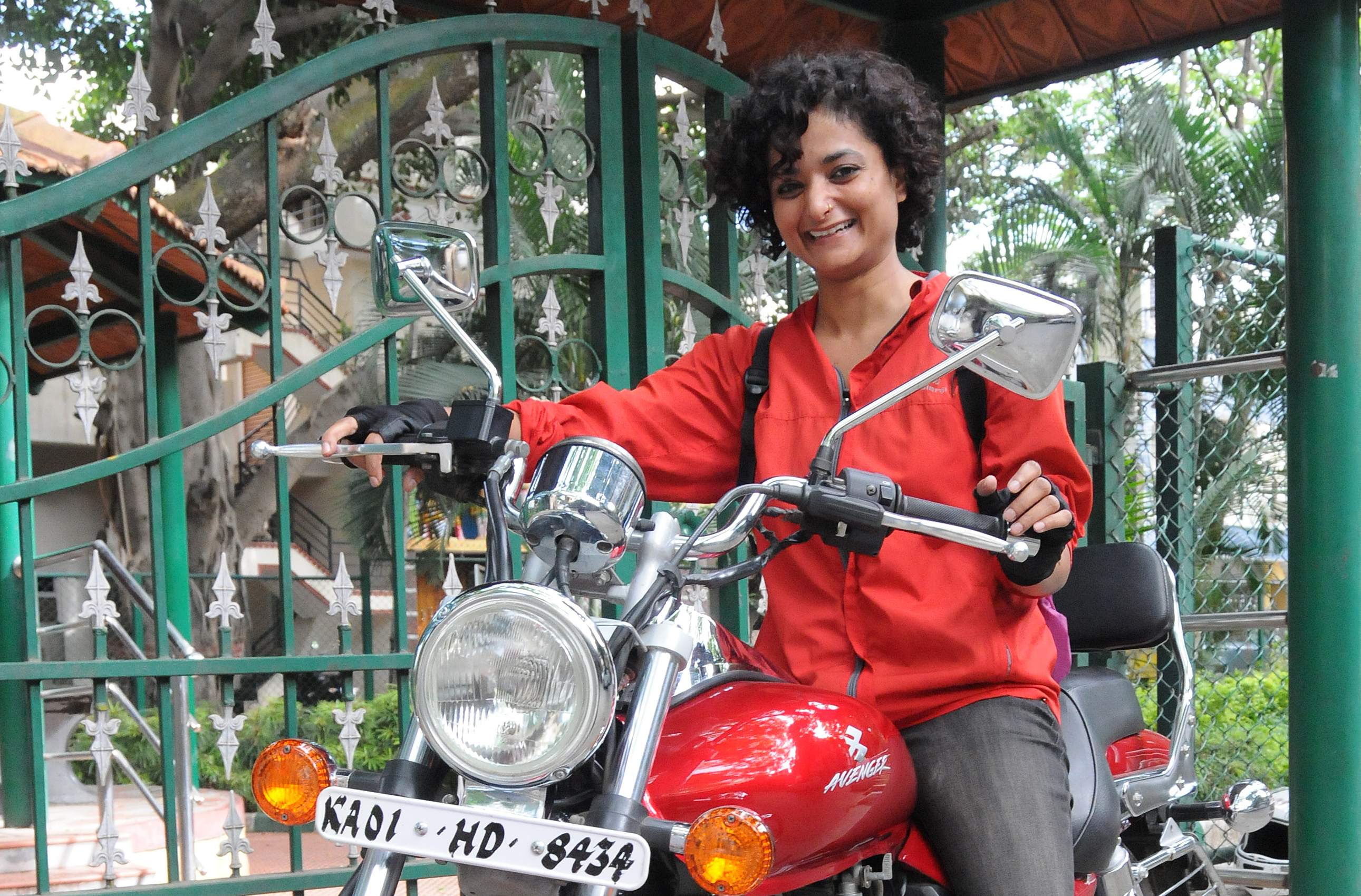 All smiles: Gupta posing with her Bajaj Avenger

Living life to the fullest
Gupta, apparently, had tried her hands at several things before venturing into biking. She was a housekeeping manager in a five star hotel, a dancer with the Shiamak Davar troupe, a fitness (pilates) trainer and a facility manager in an MNC, before she decided to set out on her bike on the Golden Quadrilateral ride. “I know my strengths, but proving oneself in a field where no one is appreciating you is not worth it. So, I quit the MNC job and decided to embark on something that I would enjoy — travelling,” she says. Her journey is certainly creating a path towards a better tomorrow that is devoid of societal perceptions about women pursuing their love for travel.